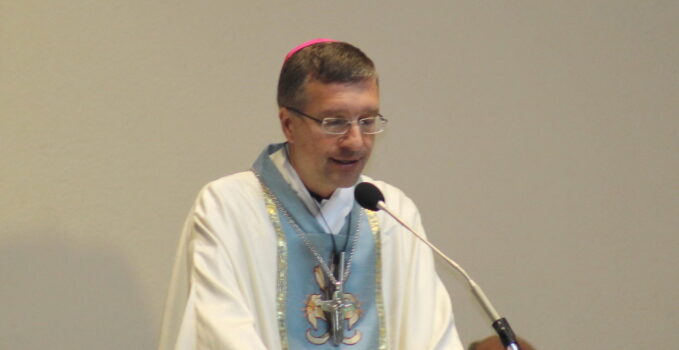 “What does it mean for an Argentinian who visits Schoenstatt for 18 October when the Mass and sermon centre on the German Movement’s motto for the year?” Daniel Martino, a member of the Family Federation, reflected for a moment, smiled and answered: “That’s just what I expected. The ‘Germanness’ of Schoenstatt! Nevertheless we had headphones and translation. And the sermon was powerful. It called for such radical openness that it was immaterial that it reflected on the German motto for the year. It was for all of us!” For all of us, for the whole of Schoenstatt: a sermon on Schoenstatt’s highest feastday that caused restlessness and gave rise to hope that this Friday, 18 October, could become a “Friday for Future” for this place, for Germany and perhaps, no certainly, even beyond. —

Right at the beginning of Holy Mass Bishop Dr Michael Gerber left no room for a “sleepy, blissful festive rest”, when he asked for solidarity with the young people demonstrating, as on every Friday, for more responsibility for the climate, as well as with the people in Syria who are again suffering under the violence of war, who are being killed, wounded and expelled from their homes.

“Climate change – in and from Schoenstatt. What inner images guide us?” asked Bishop Gerber. “One answer could be: The climate has become harsher in the real world and in the digital world. We here in Schoenstatt try to ensure that at least with us another climate dominates. We can’t do anything anyhow about the climate at large or the worldwide climate change.  Climate change – can we understand it in a one-sided way as caring for a better inner climate?”

The answer is a clear no. No “blessed are we in here”, and allow those outside to do whatever they like. Although the Bishop of Fulda, a member of the Secular Institute of Schoenstatt Diocesan Priests, did not send the Schoenstatters out into the drizzle in order to change the climate, yet “in the context of the Synod on the Amazon Pope Francis remarked: ‘Jesus did not come to bring the evening breeze, but fire on the earth”. Our Covenant Day today makes us aware that Schoenstatt’s decisive growth did not take place in the evening breeze, but in the raw climate of World War I, as well as Dachau and the Milwaukee period. Should we, therefore, be afraid of the harsh climate and highly controversial periods also in the Church? … So when we now celebrate the covenant, we do so, on the one hand, in special connection with our young generation who are expressing their concern for the climate of the future with their “Friday for the Future”, and on the other, with those participating in the Amazon Synod that is searching for the way into the future for the Church not just in this region.” 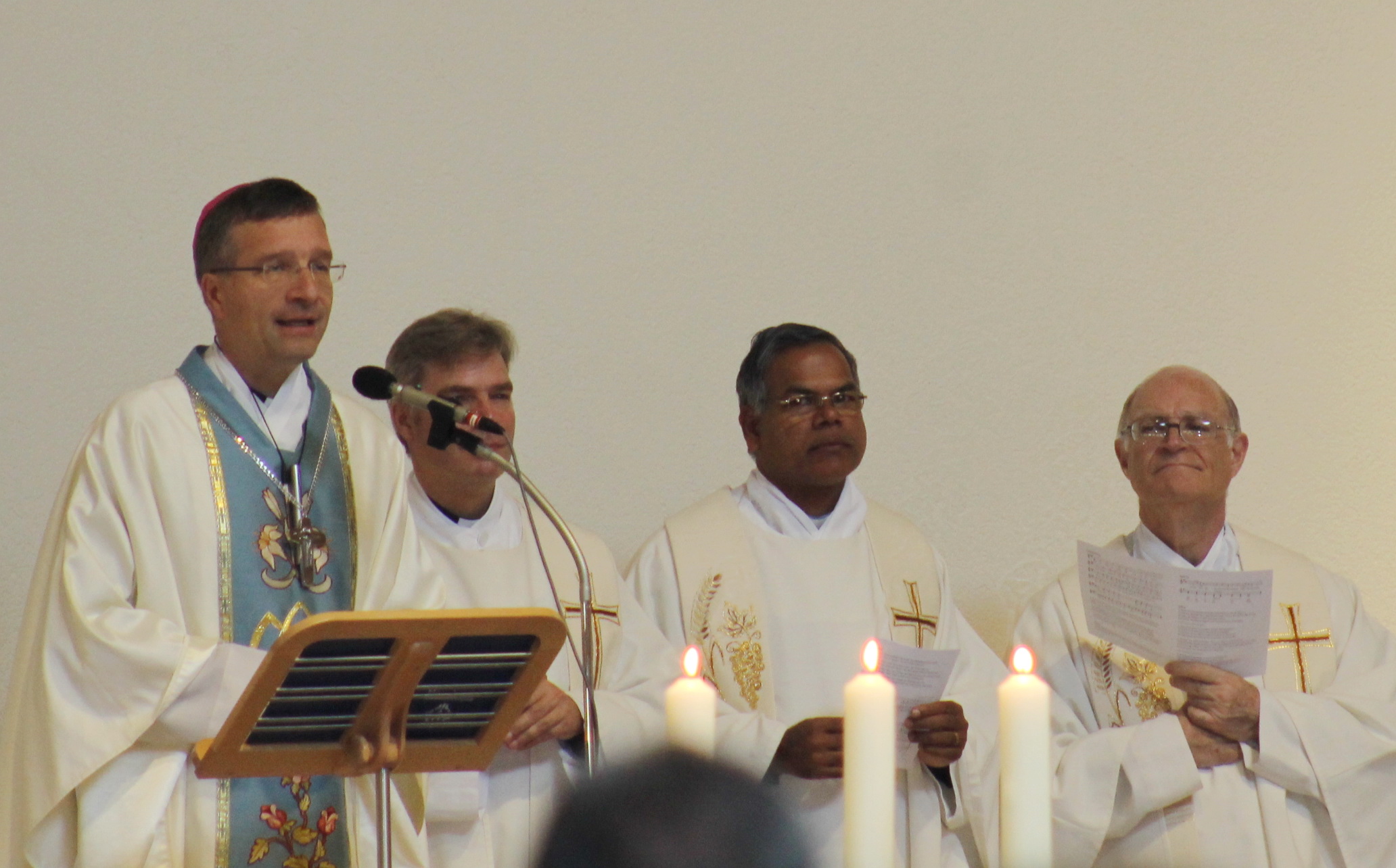 The deep currents in my soul

As we know from research and scientific information, climate change is not concerned in the first place with the rise in the sea levels, higher temperatures and storms. Climate change has to do with the deep currents in the world’s oceans. We can’t see them, but they influence world climate and the living conditions on our planet. Therefore, Bishop Gerber said, before practical action, before every dialogue, we have to ask about the deeper currents in our own souls, and perhaps also ‘Schoenstatt’s soul’?.

“So let us ask: How does my soul react spontaneously and immediately to the large and small movements in the Church and society? Is my ‘Humboldt Current’ fear? … Or is it humiliations I have experienced?”

Or, does the Humboldt Current of 18 October find room?

“Today’s 18 October tells us about an original experience. To start with Joseph Kentenich experienced it personally, and then 105 years today he experienced it with the first Co-Founders here in the shrine. It is the original experience: I am loved and gifted. God has offered me his covenant. It is an original Marian experience. It is the faith in God’s affirmation to Mary: ‘You are full of grace’. These words appear also over my life. The celebration of the covenant and a covenant culture mean that this experience has to fill the space in my soul. This is more than only knowing about it. Through regularly and repeatedly entering into the covenant every 18 October, and the 18th of every month, and every day in my home shrine, this original experience implants itself more deeply into my would, and from there it will become the predominant dynamic life of my soul.” 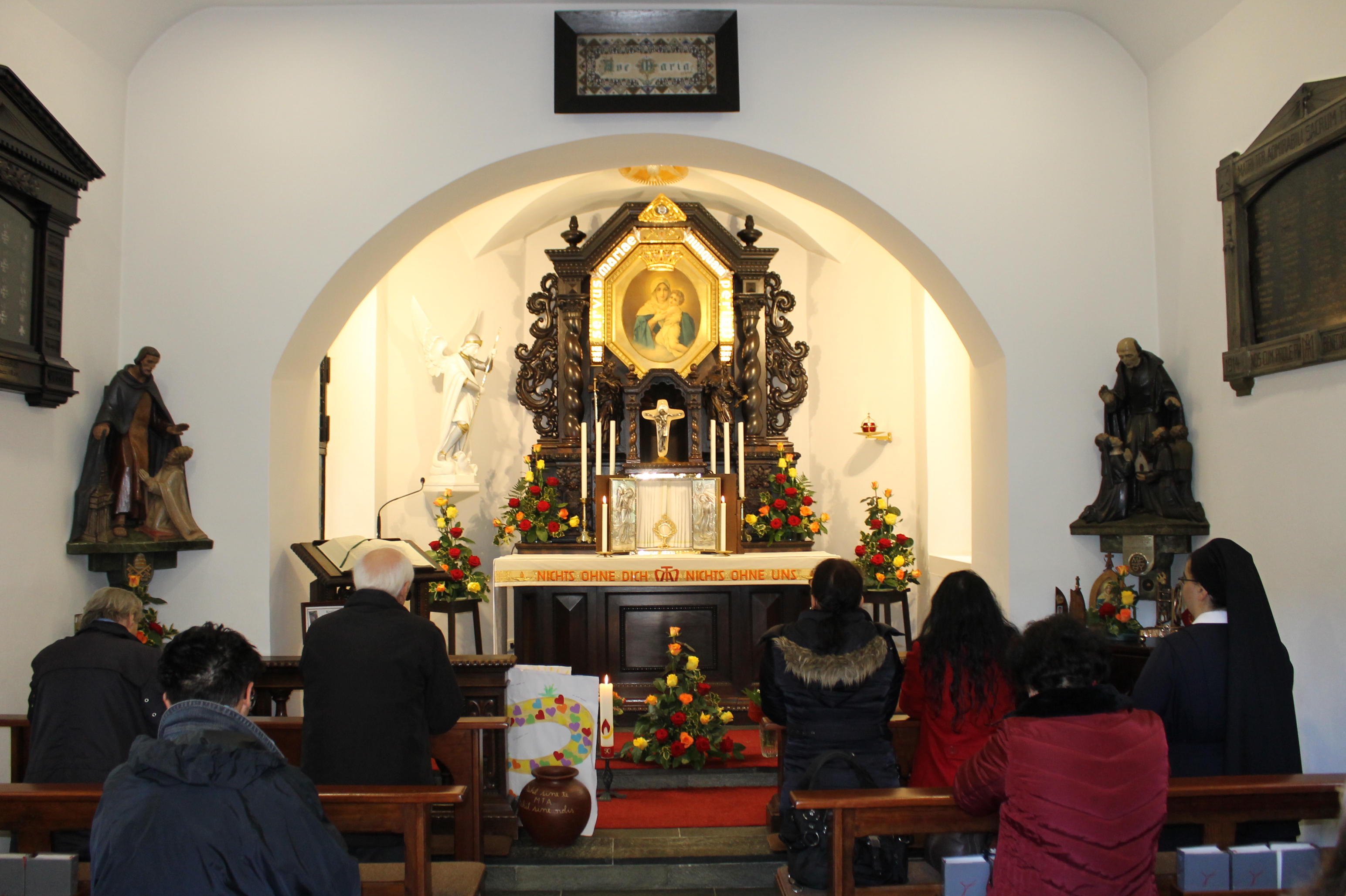 In a Pedagogical Conference in the early 1930s Fr Kentenich listed the fundamental rules for genuine dialogue. One of them is: “I allow the other person to hold their standpoint.”

Here Bishop Gerber became really practical and pointed to some of the things in society and the Church that some Christians, including those belonging to the Schoenstatt Movement, find difficult to cope with. He mentioned as an example the Maria 2.0 movement, a movement of women in the German Church who are looking for more rights, even including ordination.

Climate change: Let us ask ourselves critically: Where do I try to find an honest and unfiltered access to the reasoning of people who have a decidedly different opinion to mine? Which newspapers, which articles do I read in the internet, and which don’t I read? Do I accept everything only on hearsay, which has already been critically commented on by opinion leaders who follow the same direction as I do, or do I read the original texts of the reasoning of others?”

Then a dialogue can develop, a culture of encounter can begin, when I allow the other person to have his or her own standpoint – without having to share it!

“Climate change: I would like to encourage you, dear Schoenstatt Family and dear formations in our Schoenstatt Movement … to look out for a very immediate  exchange with those whose opinions within the Church are often very foreign to us. … Our founder listened attentively to the currents of his time. Let us learn from him how to listen. Where does the other person point out to me an aspect of reality I have not been aware of until now? What new inspiration can I take from this conversation?”

What inspiration do I, do we, take from this sermon?

A question for which there was little time after the festive Holy Mass because of the constant drizzle. However, it is a question that certainly re-echoed that day in the personal moments in the Original Shrine and during the renewal of the covenant that afternoon. 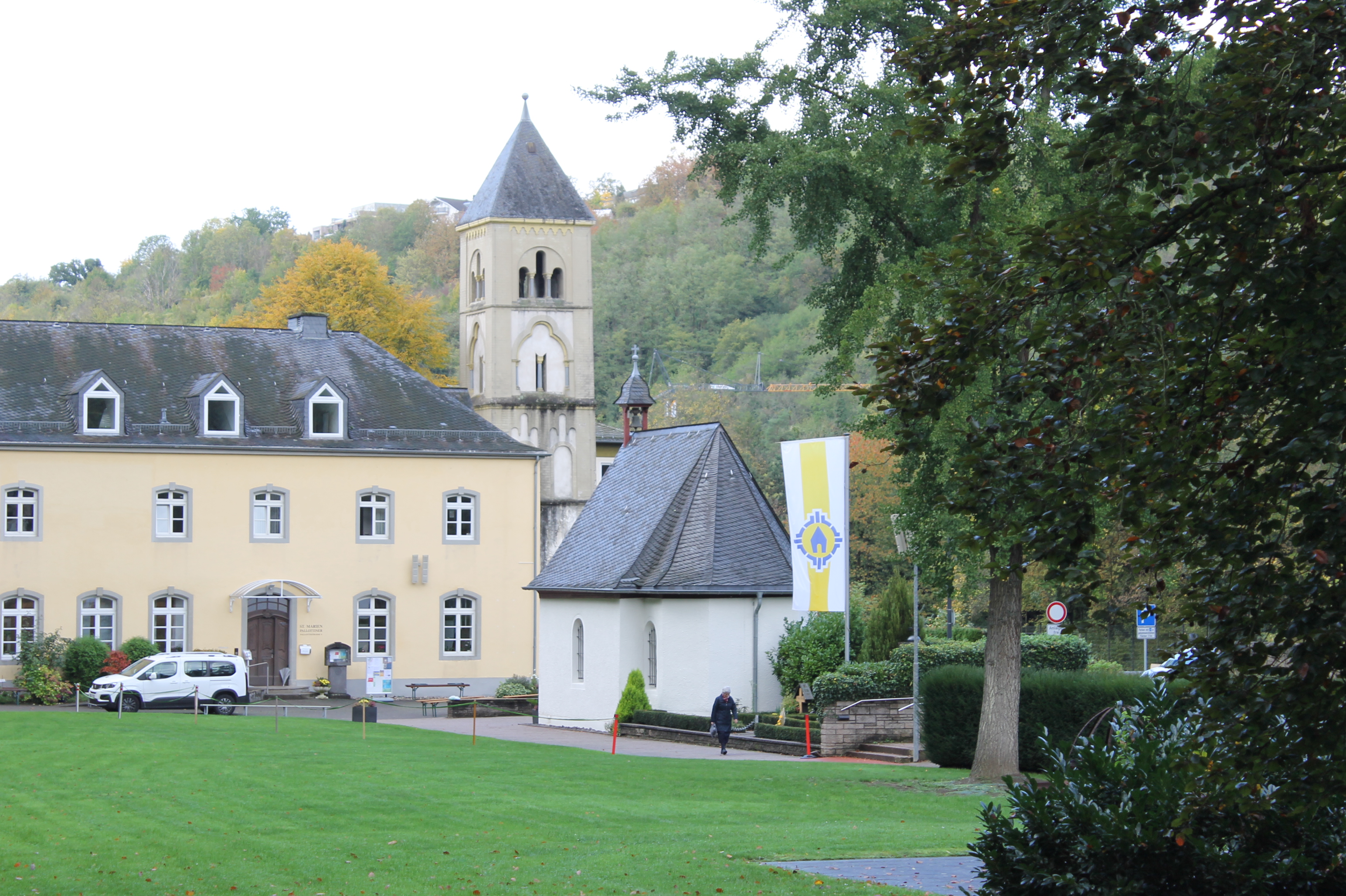