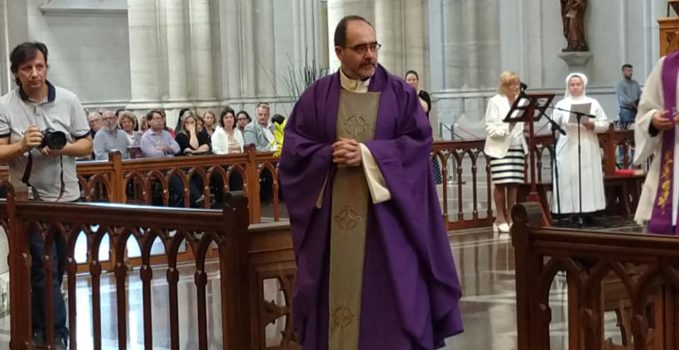 The sleeping giant of our Sacred History awakens slowly and, without great fanfare, the light of Hoerde’s fruitfulness has begun to shine. —

The significnce of this moment invites us to open our eyes and admire the bright and unexpected paths that have been mapped out in heaven.The warmth of the self-sacrifice of all those who preceded us will surprise us greatly.Together with them, the Blessed Mother “foreshadowed” this with her Queenly signs and manifestations. This requires us to be alert, to allow ourselves to experience renewed strength, and focus on the language of these signs so that together, we can interpret their call.

We wish to share with the whole Family, the experience of God’s faithfulness that moved the entire Schoenstatt Family in La Plata on Sunday, 10 March, when Fr. Jorge González, a member of the Schoenstatt Priests’ Federation in Argentina, and a priest known for his immense 27-year experience as a evangelizer, became the parish priest and rector of the Cathedral with the blessing of Bishop Víctor Manuel Fernández and took up his formal position as the archdiocese’s vicar general.

We still don’t know the immensity of this recognition, nor what is “still to come”. It is the context and history of the La Plata shrine in Argentina that makes this event significant. 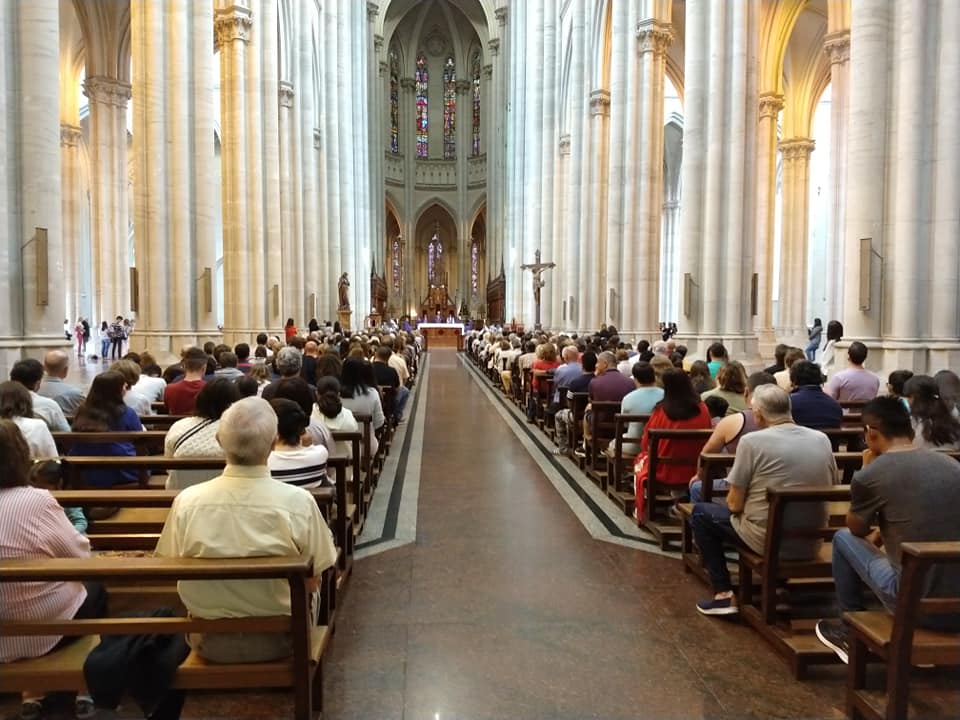 The role of La Plata in the history of Schoenstatt

La Plata is the capital of the Province of Buenos Aires, and the Schoenstatt shrine was built in the shadow of the Cathedral in 1965 as a symbol of the struggle for our father and founder’s freedom from the chains of exile.

Monsignor Antonio Plaza, the diocesan bishop at the time, was a providential co-operator of Fr. Kentenich’s and of the entire Schoenstatt Work. During a time of strict prohibitions and limitations, he welcomed into his diocese the seminarians of the newly formed Sion community, who were ready to receive Holy Orders but had not been accepted by any prelate in the world.

A shrine in the shadow of the cathedral

Through the bond of trust that he had with Fr. Kentenich and the Schoenstatt Sisters, the Bishop initiated the building of the shrine next to the Cathedral.

It was blessed on 15 August 1965, with this mission set into its foundation: Liberation Shrine. Years passed and successive generations of Movement members, and the overflowing graces asked for and received in the shrine, gave rise to autonomous communities of leaders, numerous vocations to the Secular Institutes and Federations, and spirit-filled laity, active bearers of the promises of the founding generation: sacrifice everything for the charism, in an intimate covenant with Mary, with the Church and for the Church.

They raised the banner with renewed fire to liberate and pass on Fr. Kentenich’s charism to society at large. Recreate the evangelizing plan in light of the emerging culture and transform everything. Recognize the call of our current times to the Movements in the prophetic voice of the Holy Father: Go out, go out!

The time has come to make Fr. Kentenich’s deep convictions our own, regarding the model for the Church that we have been tasked to build. “He understood the fundamental theme of the Council envisioned by Bl. Pope John XXIII – to make the modern Church a full and effective player in shaping the modern world from the vitality of the Gospel. And he knew that this was ultimately the same mission that God had given to Schoenstatt in 1914. In this light, our founder’s promise to Pope Paul VI in 1965 – that “Schoenstatt will do all it can to help realize the aims of the Council – is a reminder that we cannot just ignore it.”[1] 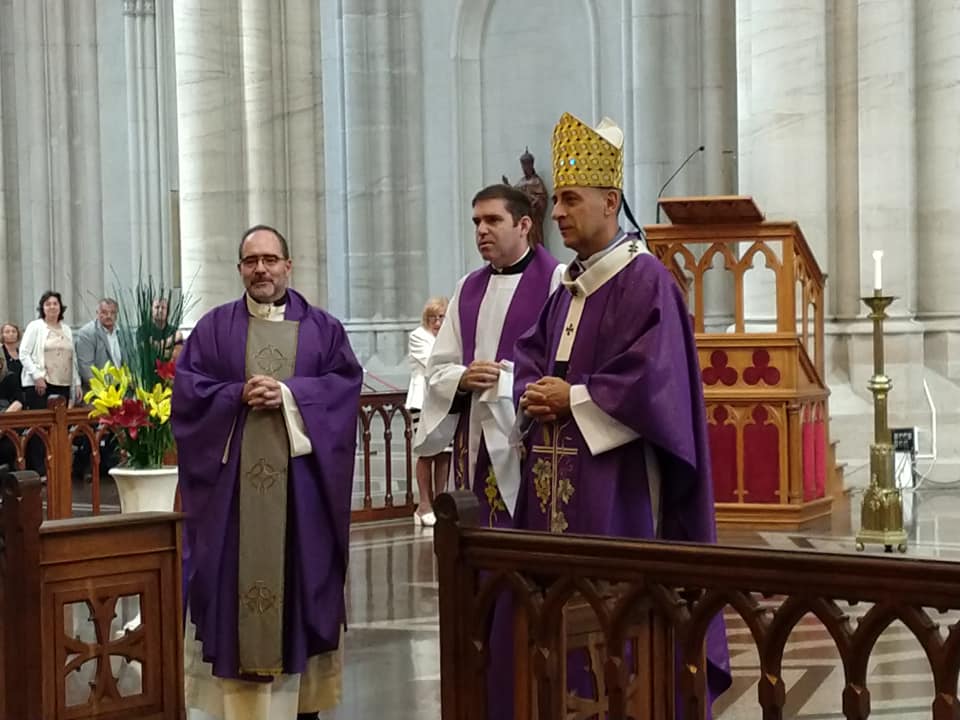 A Schoenstatt that goes out

2019 – The voice of the Schoenstatt Federations in Argentina echoes the call and challenge to take up these promises.

“United in the Covenant of Love, the entire Schoenstatt Family celebrates the Hoerde Jubilee because it marks the beginning of its common APOSTOLIC FEDERATION vocation that cuts through all of its organizations and members. Naturally, within the entire Schoenstatt Work, and leading up to the Jubilee, the Apostolic Federations, experience the particular and renewed commitment to guarantee the federative and apostolic spirit of the entire movement.

Given that Hoerde signalled the externalization of Schoenstatt’s charism beyond the walls of the Pallottine seminary and its gift of a new movement to the Church, in what was the Pentecost of the Covenant of October 18 1914, the Apostolic Federations feel that the celebrations for the Jubilee should express the opening of our charism to the Church, its “going out” into the world and not a retreat into itself.

The fact that the very beginning of the Schoenstatt movement, paradoxically, did not happen in Schoenstatt, but in Hoerde, can be read as a sign of the times pointing toward the development of the movement’s vocation in a multi-faceted, polycentric, and decentralized manner, in unity with the same Spirit, guaranteed by the common Covenant of Love with our Mother and Queen Thrice Admirable in the Schoenstatt Shrine. Therefore, it is important that the jubilee celebrations do not take place in original Schoenstatt, but are spread out in a simultaneous network at each shrine around the world, where this Covenant of Love has been lived out for more than 100 years.”

The authentic “federative” and “apostolic” vocation of the whole movement would thus find its expression in the celebrations in various places. On the other hand, the Hoerde Jubilee celebrations should not be reduced simply to the memory of an event, but should be effectively be a renewal of the movement’s “reaching out” attitude, prophetically expressed on that historic day in 1919, and renewed at the centenary of the Covenent of Love in Rome by the Holy Father, encouraging the entire Movement to become a “Schoenstatt that goes out.” [2]

Our own DILEXIT ECCLESIAM

The Church begins once more, we would almost like to say, to be born again so that she can give birth to the new times (…)

Let me repeat: October 18 signifies a new divine initiative for these times.  God chose Schoenstatt from deeper sources of the Church in order to anticipate the great, great task which the Church has taken upon herself [in Vatican II] for our times. (….) [3]

[1] “The Mission of the Exile Shrine for the Post-Conciliar Church”, Conferene from 11 July 2004   Fr. Jonathan Niehaus

[3] “The Mission of the Exile Shrine for the Post-Conciliar Church”, Conference from 11 July 2004   Fr. Jonathan Niehaus