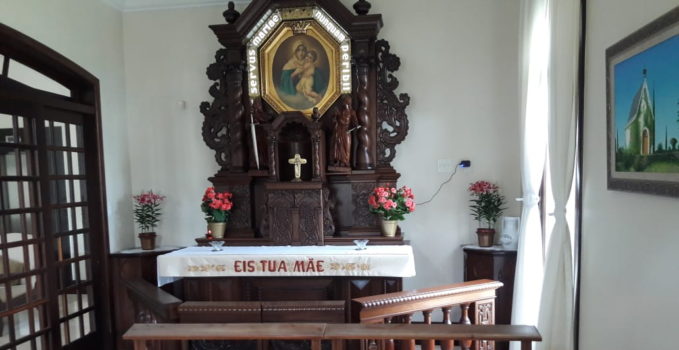 Another one of God’s Surprises: the first Mass in front of the altar of the Shrine

Last Sunday (03.03.2019), the first Holy Mass was celebrated in front of the Sisters of Mary’s house, where the altar for the future Santa Catarina Shrine will be located. This is also another surprise from God. Normally the Sunday Mass is celebrated in the afternoon in a tent on the large grounds of the Mother Thrice Admirable and Queen.

But because it was so hot —and not many people were expected— the Mass was moved up to the Sisters’ House. When the priest arrived and saw the altar in the next room, he suggested celebrating Holy Mass at the new altar. The opinion of those present was sought and most of them voted for the place at the new altar. Then a deacon from the diocese came, which made Mechthild’s service as a Eucharisitic minister unnecessary, and it became quite crowded in the room. But even the somewhat late attendees found room on white plastic chairs in the vestibule.

There was— as per usual on Sundays— coffee, homemade cakes, and ‘pasties’ after Holy Mass, and at the shrine in front of the new altar, there was quite an impressive crowd praying, admiring, and reporting. The altarpiece is the work and gift from Renate Dekker! 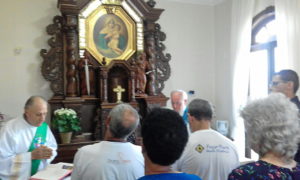 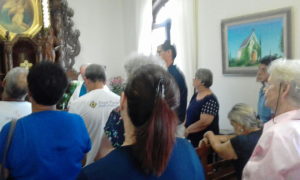 The Altar for the Future Shrine of Santa Catarina has Arrived