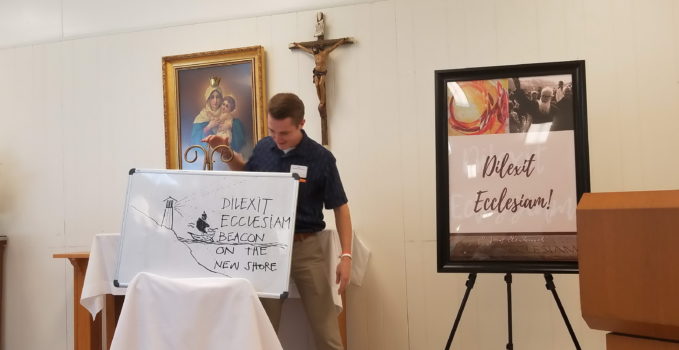 Dilexit Ecclesiam: Beacon on the New Shore of Texas!

The Annual Texas Delegates Convention of the Schoenstatt Movement took place on Saturday, October 13th at the Cor Unum in Patre Shrine and Schoenstatt Center in San Antonio, Texas. —

After a continental breakfast, the convention began with the opening prayer that reads as follows:

“After having commemorated the 50th anniversary of the Homegoing of our Father and Founder with the celebration of the Year of Father Kentenich, once again we turn to the future and ask ourselves the eternal question, ‘What does God want of us in these troublesome times?’  Divine Providence highlights for us the words on the tomb of our Father and Founder… He loved the Church, and immediately we know our way.  In spite of all his suffering at the hands of the Church, Father Kentenich wanted these words to appear on his tomb.  And as we bear his mission into the newest times, we want to be like Father Kentenich.  In order that it can be said of us that we loved the Church, we have to love the Church now, today, with all the difficulties and problems it faces.  We get our strength and resolve from our Covenant of Love with Our Mother Thrice Admirable, Queen and Victress of Schoenstatt.  In these times when modern man turns to pills in order to face daily life, Father Kentenich would say that he only took one pill: the Covenant of Love.  Father Kentenich did not act on his own; he always counted on his followers, his Family.  United as a Family, strengthened by our Covenant of Love with Our Mother Thrice Admirable, Queen and Victress of Schoenstatt and hand in hand with Father Kentenich in the Shrine, we proclaim our Schoenstatt mission to the Church and World.  As we begin our Delegates’ Convention, we pray to our Heavenly Father… LEAD US ACCORDING TO YOUR WISE PLANS.  Amen”

From the heart of the Father

Sr. M. Heidi Infante made the first presentation on Father Kentenich and the excellent presentation emphasized Father Kentenich and his founding charism.  She stressed the words of St. John Paul II to Schoenstatt in 1985 in which he encouraged us to be loyal to our Founder and to his charism, to be loyal to the Covenant of Love, to live it generously, and to have the example of the Blessed Mother’s life in our own life.  Sr. Heidi also mentioned the promises Father Kentenich made to St. Paul VI and to the Bishop of Muenster, Germany.

Sr. Heidi concluded her presentation with the moving words from Archbishop Lucas Moreira Neves (Secretary of the Congregation for Bishops) to the international Schoenstatt Family at the Basilica of St. Paul Outside the Walls in Rome on 21 September 1985:  “Make the ideal enkindled in the heart of Father Kentenich your own and live it!”

Felipe Quijano Ortiz, a member of the Schoenstatt University men in Austin, Texas presented an inspiring portrayal of Josef Engling whose 100th anniversary of death was recently commemorated in Cambrai, France.  Basically he stressed Josef Engling’s quest for sanctity especially in the trenches during World War I.  Father Kentenich called Josef Engling the “living founding document” and Felipe did an excellent job in demonstrating how seriously Josef Engling took his striving for sanctity and what a powerful example he is for us to also strive for everyday sanctity to the highest degree possible!

Schoenstatt’s gift to the Church

Sr. Danielle gave the next presentation, and her emphasis was of the Church on the new shore.  She eloquently brought out three important aspects:  Schoenstatt, Heart of the Post-Conciliar Church; the Council’s Image of the Church and its Challenge; and Dilexit Ecclesiam.  These are the last three chapters of KENTENICH READER Volume III Following our Prophet, for those interested in reading this valuable information.  Sr. Danielle also stressed that Father Kentenich promised to help St. Pope Paul VI carry out the post-conciliar mission of the Church, under the protection of Mary.  Let us recall the photo where Father Kentenich is standing before St. Pope Paul VI, and it seems he has a lunch pail in his hand when in reality it is a gift for the Pope, a chalice for the new Church to be built, Matris Ecclesiam, Mother of the Church.  Sister also stressed that the Church on the New Shore is: a fraternal church, a poor church, a church ruled by the Holy Spirit, a humble church, a dynamic church, and it is leaven and soul.

We concluded these thoughts with the last paragraph of KENTENICH READER Volume III:  “When I look back in this way, what an amazing time that was after the First World War when our Marian devotion was so controversial!  What a battle we fought at that time in honor of the Blessed Mother!  And since she has glorified herself in our Family as part of the Church, it will always remain our task to see to it that the Blessed Mother is recognized in the Church; indeed, not only that she is acknowledged, but also that she is accepted as the GREAT BEARER OF CHRIST, SERVANT OF CHRIST AND MOTHER OF CHRIST FOR THE NEW ERA!”

Fr. Gerold Langsch was in charge of the final presentation before the discussions and deliberations in finding a new motto for the year.  The title of his presentation was Dilexit Ecclesiam – Schoenstatt and parish life.  Fr. Gerold had contacted several Schoenstatt members, and had them share with him their experiences of implementing and experiencing Schoenstatt in their parishes.  In essence, the aim is to implement Schoenstatt in as many areas of parish life as possible, not by labeling it in always referring to Schoenstatt, but by living it.  In this way we cultivate a covenant culture, and we are at the service of the Church.  Father Gerold encouraged everyone to live daily life with Blessed Mother and she will take care of the rest.

After discussions and deliberations, a special group, in the Cor Unum in Patre Shrine, discerned the new motto for the year:  DILEXIT ECCLESIAM – BEACON ON THE NEW SHORE!