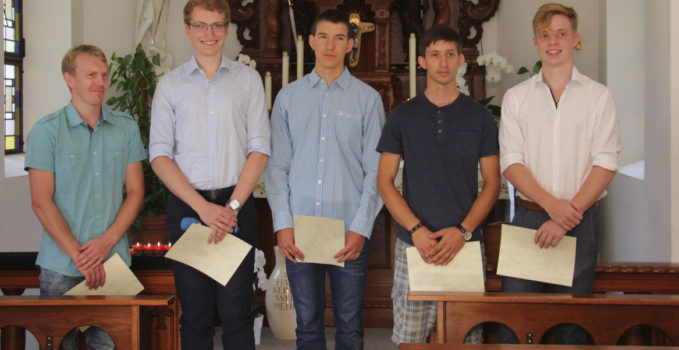 “I have a dream”. This is a well-known phrase from Martin Luther King’s historic speech. “We have a dream” could be the motto of the five young men, aged between 18-27, who gave their “Yes” on the morning of 18 August. —

Like Martin Luther King, they not only dream of a better world; but also to build it with their strength and talents. They want to build a new society, a holy city, guided by Fr. Kentenich’s hand and united to the Covenant of Love with the Blessed Mother.

It was a touching moment, when during the Holy Mass celebrated by Fr. Felix Strässle in the Schoenstatt Shrine of Kahlenberg, in Vienna, the five young men gathered around the altar and in their own words made their membership consecration. Their family, friends and representatives of the Schoenstatt Movement celebrated with them beneath a bright summer sun. The young men prepared for this day over the last one and a half years, meeting regularly on the weekend.

After Holy Mass, they continued celebrating with sparkling wine and snacks. There was a promise in the air that in the coming years these five young men will accomplish many positive things for our Movement, the Church and society, through their commitment and work.