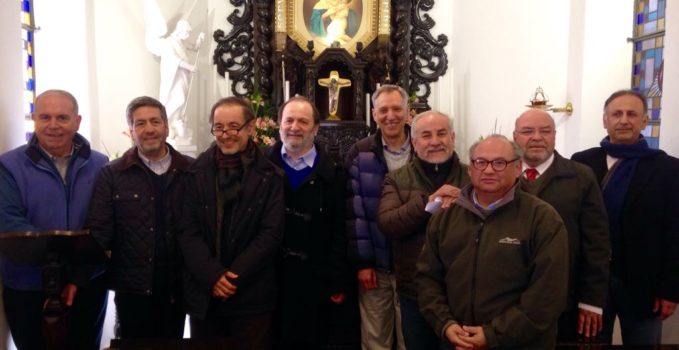 Final consecration of the first Men’s Federation course in Chile

On 25 August, in the Cenacle Shrine in Bellavista as part of the celebration of the 10th anniversary of the founding of the Men’s Federation in Chile, the first course made their final consecration.  With this they took a very important step towards consolidating their autonomy.  For more than a decade, the task for the founding process, emerging from the International Family Council fell to Fr. Mariano Irureta and Jorge Westphal.—

They were accompanied in the Mass celebrated by Fr. Mariano, by their respective wives and Sr. María Luisa, the daughter of Angel Mansilla; by the members of the other Federation courses; some special guests; representatives from the Men’s Branches: the Madrugadores men’s group, Men’s League, Young Professionals, the Forjadores men’s group and the Mambré Community; and Frs Rafael Fernández, Raúl  Feres, Ricardo Bravo and Carlos Cox.

Origins of the Men’s Federation

In the case of the first course, the process for their constitution, initially as a group “seeking something” began in 2005.  Almost all of its members were already attached to Schoenstatt for many years through knowledge of and belonging to the Schoenstatt university youth groups which would meet on Infante Street at the Providencia commune in Santiago.

On May 31, 2008, they met for the first time with the idea of founding the Men’s Federation which was consolidated on August 30, 2008 in Bellavista.  On that occasion – in the shadow of the Shrine – 17 men gathered and officially constituted the first two courses in formation which led to the Men’s Federation in Chile.  The meeting with the members of the second course was a pleasant surprise, who were also young men in discernment, also “in search of something”…..

The Men’s Federation is formed by laymen, most of whom are married men, fathers of families, workers and professionals.

The emphasis on the laity is key to our formation, our vocation (calling) to a mission given by God as leaders and agents of change in our temporal reality.  Each one of us and our communities cultivates the awareness of this calling and of this particular election:  God calls us, so that participating in Christ’s priestly, prophetic and kingly role, we consecrate the secular world to Him.    There is a special calling to, especially through our work, but also through all our activities – social, political, teaching, cultural, etc. – to order and consecrate the secular world to God, participating in the construction and development of a new social order.

The members of the Federation and their communities are called to live the deepest mystery of their identity as men: fathers and sons.  We are called to be children before God (and the Blessed Mother) and to be parents before men and the works which God places before us.  Both elements (childlikeness and fatherliness) should develop and be deepened within our courses and inside each one of us.