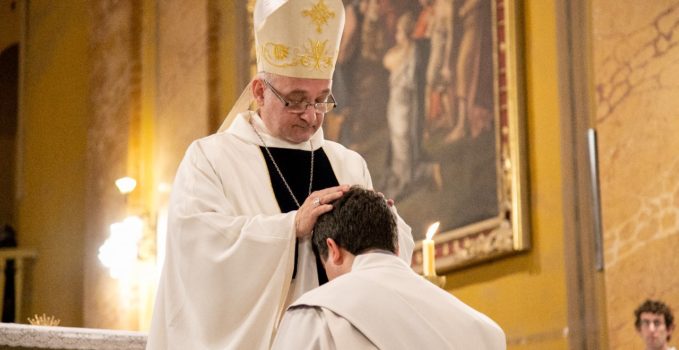 “It is the Lord” – Postcards of Santiago Ferrero’s priestly ordination

On the afternoon of Saturday, 28 July, Santiago Nicolás Ferrero Arinci was ordained as a priest with the laying on of hands by Bishop Francisco Pistilli, the Pa’i at the Córdoba Cathedral. Scores of Schoenstatt Father priests and seminarians, along with hundreds of relatives and friends filled the church to capacity. Everyone highlighted the small details that were prepared for the celebration. At every moment, it was noted that Santiago puts a lot of personality in everything he undertakes. — 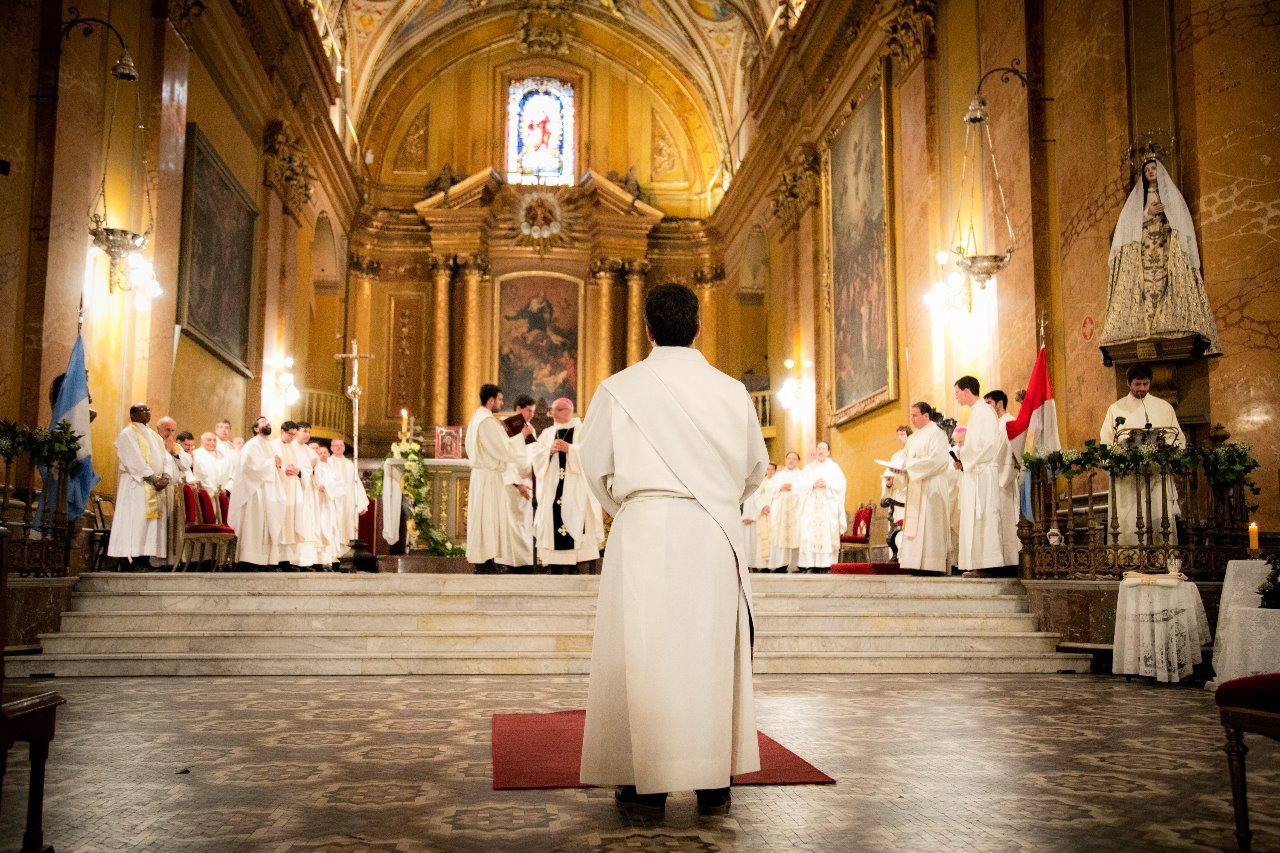 During this Argentinean winter that has been so cold and rainy, the weather also joined the celebration. There were two days of blue skies and warm sun. Moreover, everyone stressed how they experienced a time of family, of re-encounter in the warm way the Schoenstatt Fathers welcomed everyone who visited them.

There were very touching moments. The entrance song, “Un nuevo Sol” (A New Sun),  which is very meaningful to the Argentinean youths because it was the hymn for WYD 1987 in Buenos Aires, was a prelude for what was experienced later. More than thirty celebrants entered in procession, among them two bishops from Cordoba and priests who traveled from afar like Fr. Facundo Bernabei, who came from Rome. 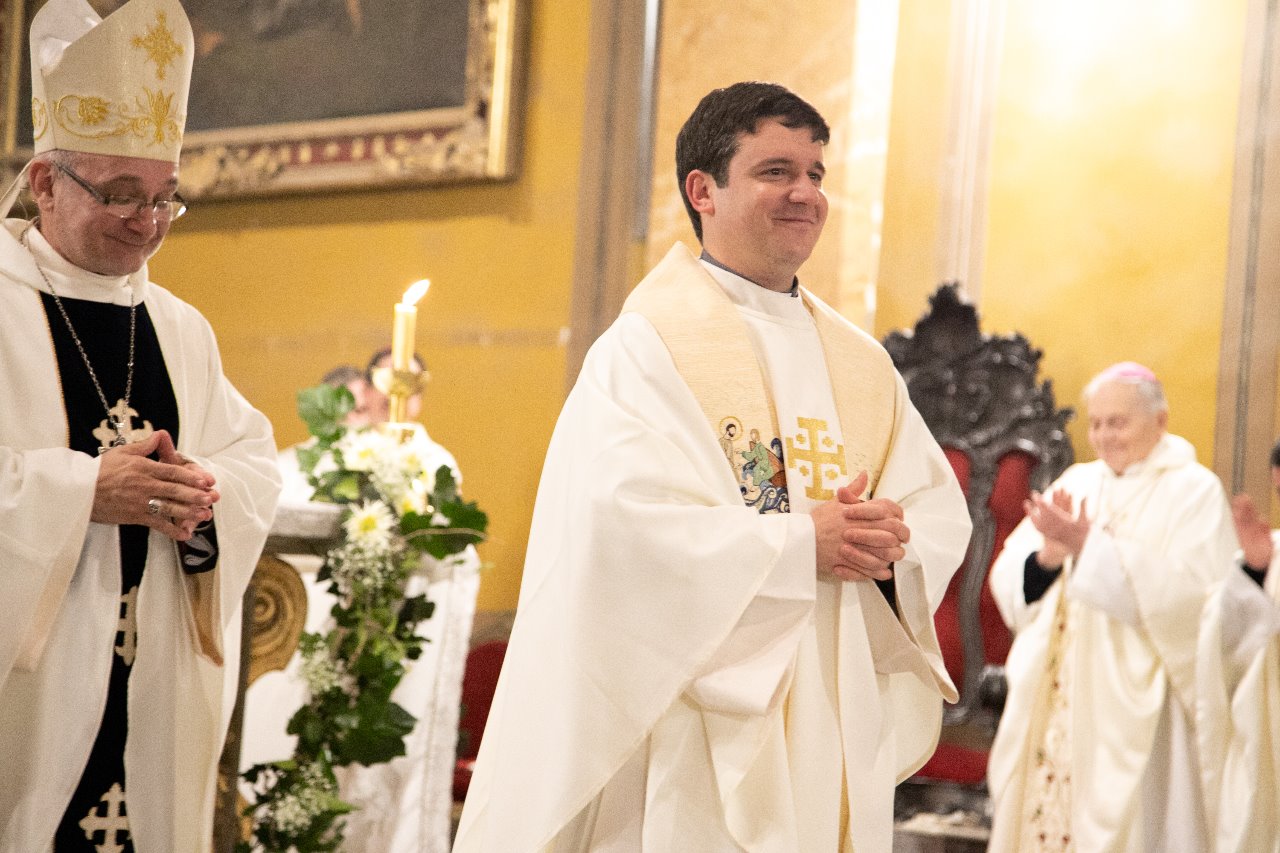 The call, the priestly promises, Santiago’s prostration during the litanies, the consecration prayer, the imposition of hands of all the presbyters and the priestly vesting were unforgettable memories for those who were there in the Córdoba Cathedral.

After communion, Fr. Santiago’s youngest nephews sang the first stanza of a song that began with “May the Lord Bless you and keep you…” then were joined by the choir. “It was a heavenly moment,” commented a woman who traveled from Buenos Aires, “because everyone in the Cathedral listened in absolute silence, and the only thing heard was the children’s singing. The priests and bishops smiled as they looked on and everyone was amazed.”

“Those who could not go to Córdoba for Santiago Ferrero’s ordination were attentive to the transmission on Facebook, and therefore, emotionally we prayed, we sang, and accompanied Santi and the entire Schoenstatt Fathers’ community,” someone posted on a chat of the transmission. 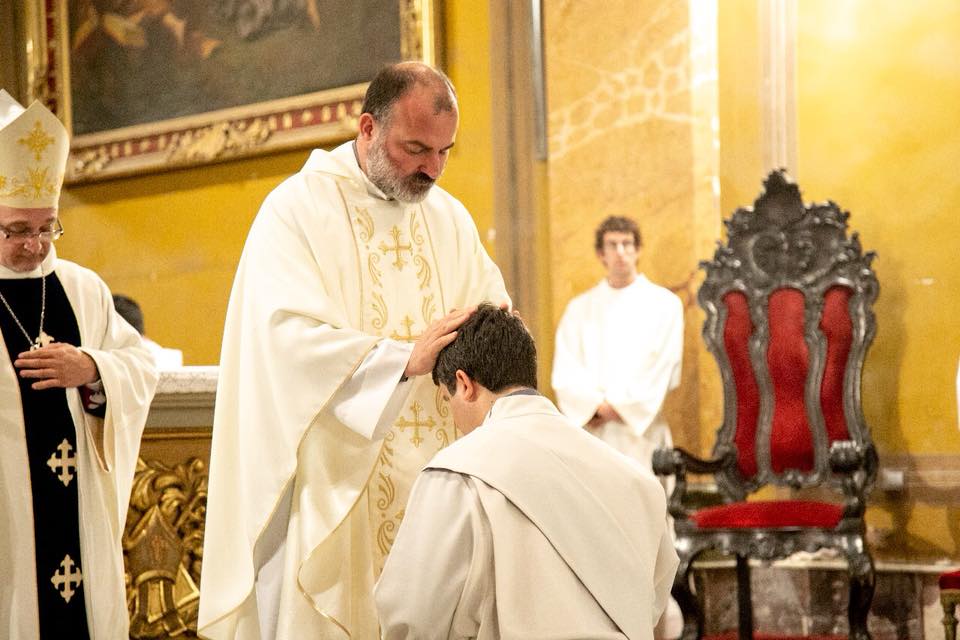 Juan Molina, a Schoenstatt Father seminarian, shared his impressions about what was experienced this weekend in Córdoba, starting with Fr. Santiago’s ordination motto that he chose: “It is the Lord.”

The long road to this day found Santiago living in Paraguay, Brazil, Chile, Germany, Italy, and Argentina. Years on the road leaving behind his native Córdoba to walk toward the whole world and to return to this place for this desired moment of ordination. Much? Too much? It is the Lord. Only he justifies, motivates, and gives meaning to this arduous road. From here there was a special echo in the words from his Novice Master who is now the Bishop of Encarnación, Bishop Francisco Pistilli: “The disciples do not have anything without the Lord. They do not have anything to eat, they do not catch anything, they only have the night, their hunger and their nakedness. Until Christ appears and they again have everything.”. The testimony that Santi gave and radiated gives account of this: evidently, he has met with the Lord, with his Lord.

A land without borders

The touching celebration seemed made for its second protagonist: second, because the first “Is the Lord.” For this, those who have accompanied Santiago on this road and are happy for his life, we were able to recognize details, winks, codes that spoke of him. Therefore, it was no accident at the beginning to sing and to dream with “a land that does not have borders; but hands that form a stronger chain than war and death.” So it seemed only right that the Cathedral had a unique mixture of solemnity mingled with a welcoming warmth that made room for everyone. For this reason, the choir dazzled everyone with their songs, which showed the long preparation in joyful work. At the end of this road, it was powerful to see that so many years of training had not been to the detriment of who Santi is. It is he. 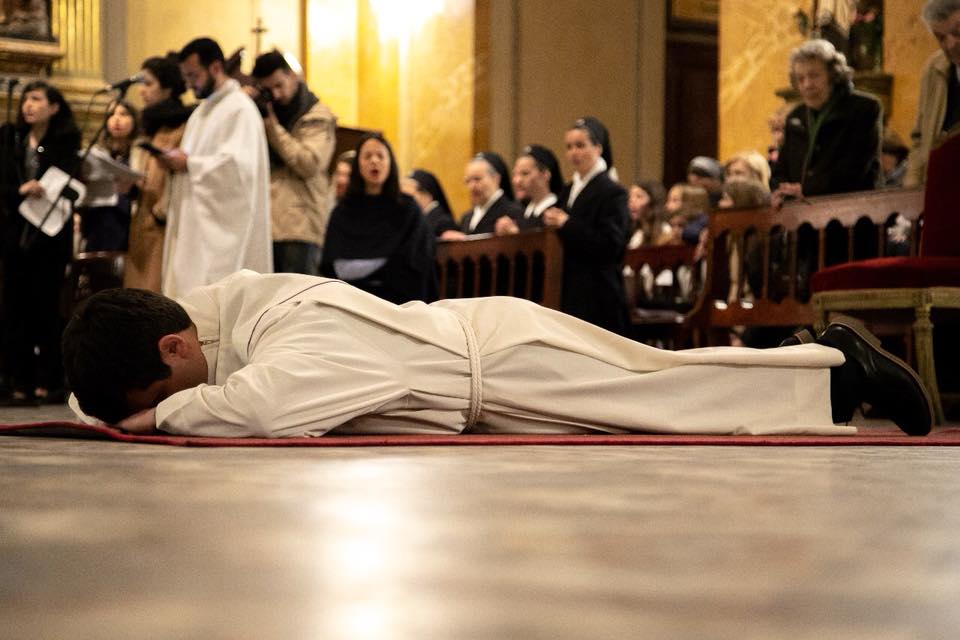 My place in the world

The two first Masses the next day had the same tune. The first one in the Shrine del Cerro, in the Fr. Kentenich Center that Santi defined as: “my home, my place in the world” and that night in the parish of Christ the Redeemer, where he did his diaconate practicum and where he will stay until the end of the year. In the Shrine, where that day he transformed the bread and wine to the Body and Blood of Jesus, Santiago along with others made real projects that will mobilize the youth. The summer missions GM (Gaudium Mariae), are the greatest proof. In this way, his vocation was awakened and Fr. Marcelo Gallardo accompanied, helping him vest. It is he.

Hands that bless, forgive and consecrate the bread and the wine

The vocation story seems to be the story of encounter of a man with his Lord, who invites him to follow him to be himself. The radicalness of the encounter operates in a very mysterious way in which no one stops being himself, but at the same time they do not remain indifferent. Thus the human and the divine are joined, they are mixed, and at times it’s hard to tell one from the other. The same hands that we saw draw, paint, and sketch are now the hands that bless, forgive, and consecrate the bread and the wine. They are Santi’s hands, they are God’s hands. They are the hands of a priest. A wonderful reality of the priest, of him who is the bridge between God and men, who is dust – perhaps mud? and a clear sky. That is what Santi became and also a few of us, witnesses of Christ passing by.

It is the Lord. 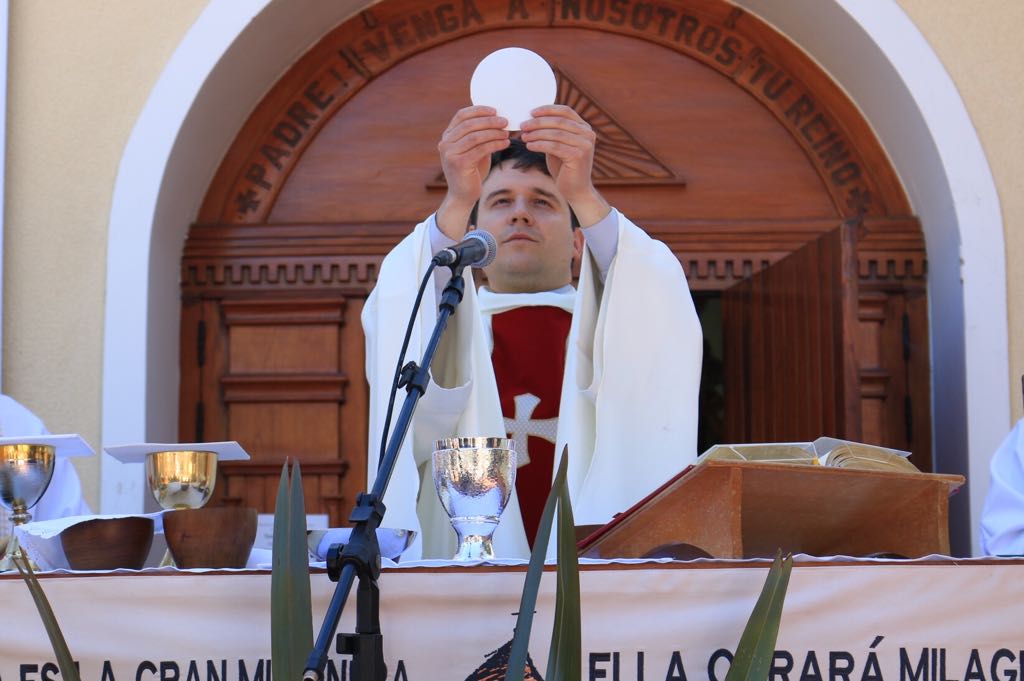 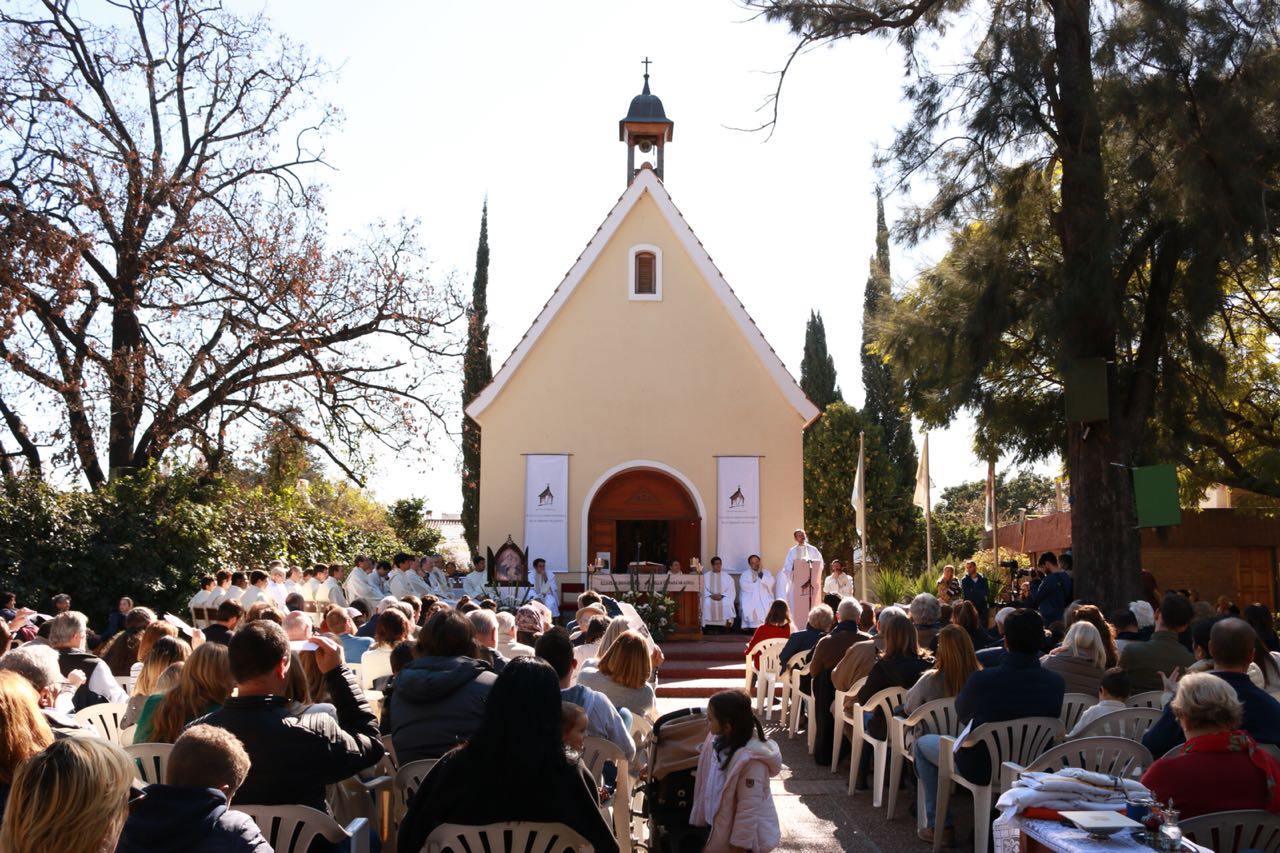