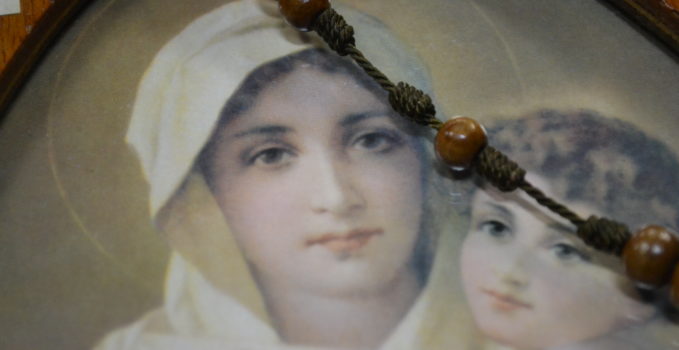 “My beautiful Little Mother will give me a little girl”

On October 18, 2016, we went to Tupãrenda as a family. I was three months pregnant, and upon arriving I saw that holy cards were being passed out about one million children praying the rosary! When I approached to ask for one for my children, the woman gave me a pink rosary: “My beautiful Little Mother, since you have already given me two little boys, now you will give me a little girl,” I thought. That day we also took the opportunity to participate in the Sweet Waiting blessing. –

Later in November during the ultrasound, the doctor told I was expecting a beautiful little girl. We were very happy! I knew it was Mother Mary sending me the little girl I had prayed for so much.

At the same time, I had a very complicated task; I had negotiated for years with Indert (The National Institute of Rural and Land Development, Paraguay) for the sale of land, which was to be finished in December of that year. The worries, the trips, nerves, and most of all discovering the business was not completed, made me feel very badly. The doctor warned me that my pregnancy might be complicated if I did not calm down. I was in the fifth month of pregnancy, and I was already having many contractions.

The following months, I took very good care of my pregnancy, but one night I had a dream. The Blessed Mother told me not to worry, that everything would be all right, and she showed me my baby girl.

I eagerly waited for the date of her birth, which was scheduled for 17 April, but our plans are not God’s plans. On Sunday, 19 March, I had incredible pain due to the contractions. We went for an appointment, but the doctor did not want to perform a Caesarean because my baby would be premature and would need an incubator. I responded with great faith, “my Little Mother told me everything would be fine. Please doctor, take her now.” The doctor explained the hospital did not have an incubator, so we went to the Villarrica regional hospital, where they did have incubators. The doctor who checked me said: “You are OK, but your baby is the problem, because she ready to come, and she is premature. Here we do not even have space for a sheet of paper, so do not even sneeze.”

When I commented to the doctor that my sister worked at the St. Paul’s Mother and Child Hospital, she recommended that I travel there. We spoke to my sister, we went directly to Asunción, and we arrived at dawn on Monday, 20 March. The check ups began again; I went to the hospital room then to the operating room. “Beautiful Little Mother, I entrust this surgery to you. May everything turn out well and may your will be done,” was total giving of self to her, with confidence, at that moment.

My baby was born on 20 March at 2:30 pm healthy and strong just as I had prayed so many times to the Blessed Mother. She weighed 2,560 kg and against all prognoses, she did not even need an incubator. As if this was not enough, the negotiation for the sale of the land was also accomplished that year.

We are a happy family because she reigns in our lives.