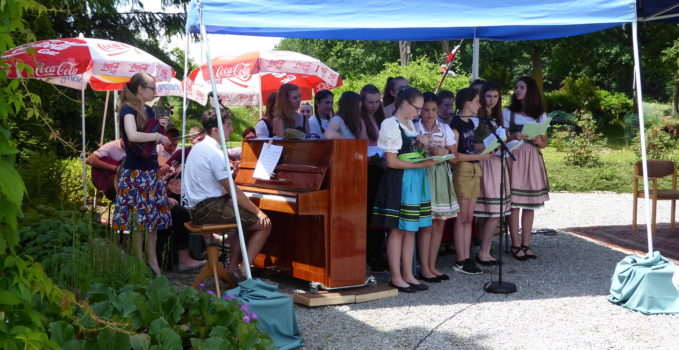 “Weilst a Herz host” – for all who can’t read the Bavarian dialect this means: Because you have a heart. It was the motto for this year’s shrine festival of the Schoenstatt Movement in the Diocese of Regensburg on the last Sunday in May. The outward conditions were excellent and the Schoenstatt Centre in Nittenau with its beautiful grounds added to the festive atmosphere.— 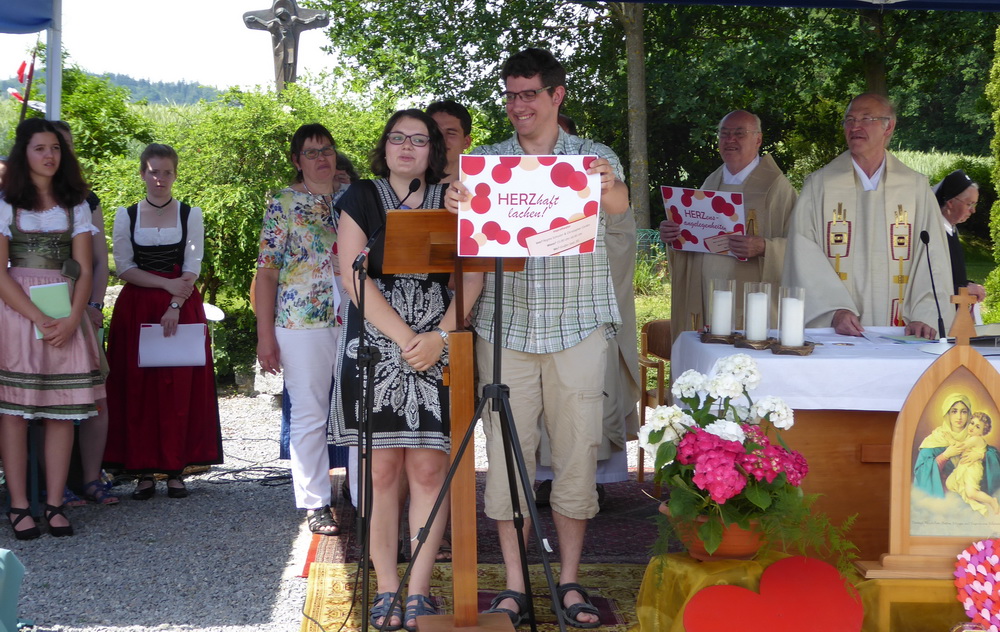 The shrine festival 2018 began at 11.30 a.m. with Holy Mass supported by the Schoenstatt Youth with their attractive, rhythmical songs. A large choir of Schoenstatt Girls, accompanied by a violin, a cajón (a box-shaped percussion instrument from Peru), five guitars and a piano supplied by the Young Men (that’s collaboration for you!), added a special note to the celebration.

The Kentenich Way: “Above all my heart”

In his sermon the Diocesan President of the Schoenstatt Movement, Fr Johann Babel, enlarged on the motto for the day. He reminded the congregation of what a heart had already achieved by the time it has turned thirty. Nothing happens without the heart. Only when it becomes temperamental does one know how important it is.

However, not only the biological heart is decisive for life. Just as important is a human heart that symbolises love. Fr Johann Babel reminded the people of Fr Joseph Kentenich’s talk when he took office as the Spiritual Director of the College in Schoenstatt. At that time Fr Kentenich said that he was at the service of the young people with all that he had, his abilities and inabilities, his knowledge and ignorance, but above all his heart.

After the youthful and beautiful Mass, those present received chocolate hearts, which were immediately eaten because the heat was melting them. In addition, each participant was given a small paper heart by Fr Babel that could be attached to a large heart. It symbolised: If I give my heart, it doesn’t become smaller, but the world becomes more beautiful.

Holy Mass was followed by lunch. For those who couldn’t cope with the heat, the dining room offered a chance to cool down. The Schoenstatt Young Men had also erected a large net as a tent that provided some shade.

After lunch everyone could choose from a colourful programme. The Nittenau Youth Brass Band gave a concert, while on the lawn there were many possibilities to reveal what one could do. 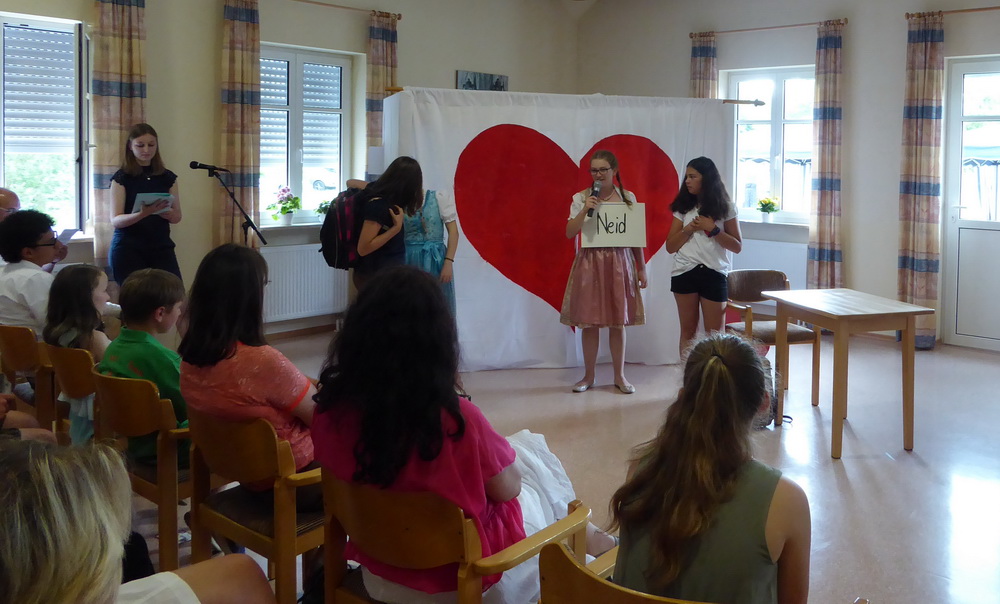 Where do I commit my heart?

The climax of the afternoon was provided by a play produced by the Young Women. It centred on the heart of a girl that wanted to get involved with many things. The girl’s heart wanted to claim for itself envy, the pressure of time, self-indulgence, pride and vanity, etc. That evening God knocked at her heart, but it was so full of the things of this world that it had no more room. The play ended with a song the girls had composed to the melody “Weusd’ a Herz hast wie a Bergwerk” (a 1995 hit by Rainhard Friendrich that translates as: Since you have a heart like a mine) and left many very thoughtful. The summary of the play and the song was the question: What does my heart live for? Many of the things to which we commit our hearts only make us more empty and broken. This wonderful achievement was answered by thunderous applause. 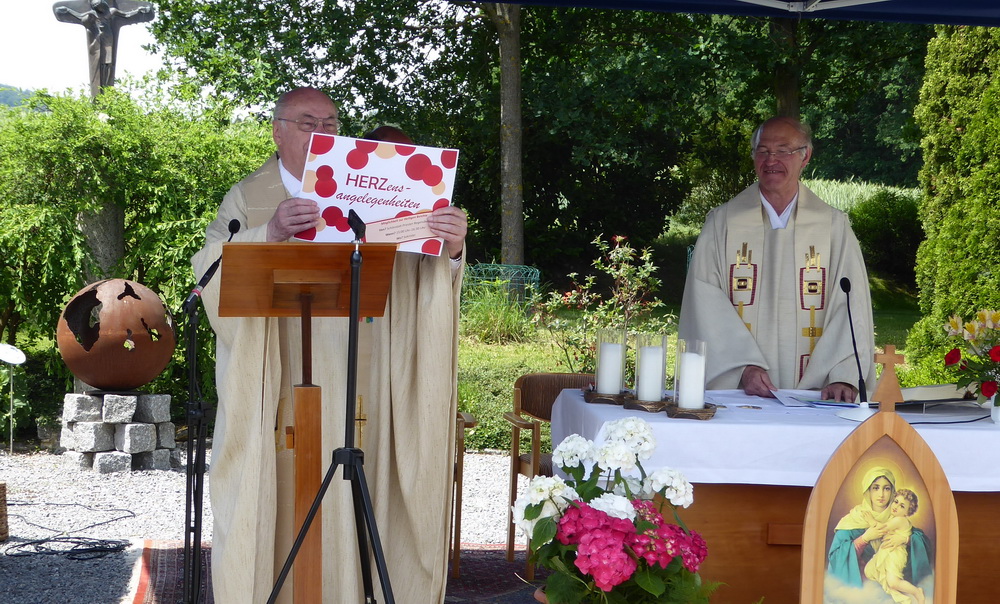 The play was followed by various workshops, such as an inspiration for married couples based on the motto: “What does my heart long for?” In addition there was an improvised play that gave rise to much laughter. It was also possible to give expression to the longings of the heart in the confessional. Throughout the festival there was Adoration of the Blessed Sacrament in the shrine. An organised hour of adoration resulted in the shedding of tears. A “heart room” invited people to a change of perspective. A meeting room in the Fr Kentenich House offered an exhibition on the life of Fr Joseph Kentenich and a short film about him. Besides various games on the lawns, which were used by the children with their parents, a warm-hearted make-up for children was available, and it was also possible to bake little heart cakes.

At 4.30 p.m. everyone gathered again at the shrine. The Schoenstatt Youth invited them to join in music and prayer. A May Devotion brought the festival to a close, during which the participants were able to place the favourite wish of their hearts in the jar. It was then presented to Jesus as at the marriage feast at Cana.

This year’s shrine festival was a great success characterised by a real family spirit. The participants were invited to reflect more deeply on what was close to their hearts. In the end all received a card with the motto song to take home. Its refrain will probably re-echo for some time to come: Because a little bit of happiness is by far not enough for you, because I have something in store for you that excels everything else, because you have a heart, you know longing, and you need me – I am waiting for you. 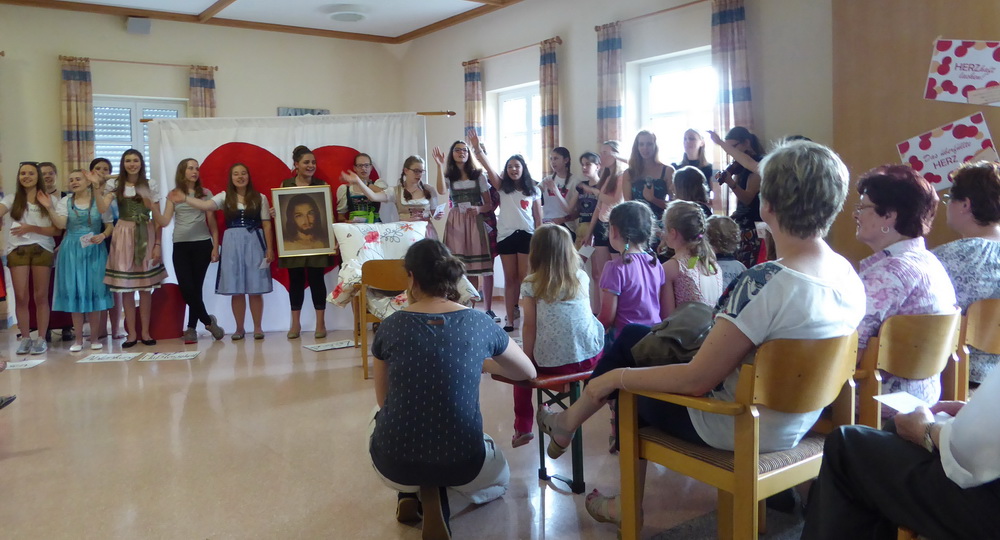