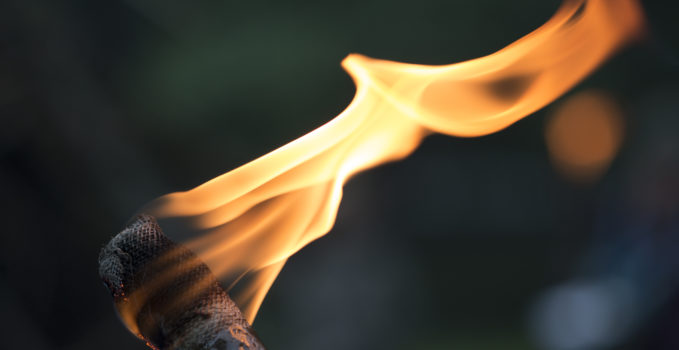 Fackellauf Brazil – the fire of Christ in the Brazilian Youth

There are words that cannot be translated because they carry a message, a unique experience…one of these words is “Fackellauf” – a German word that will forever be synonymous with commitment, enthusiasm, youthful conquest at the start of the second century of the Covenant. The Fackellauf, the painful marathon from Pompeii in Italy to the Original Shrine, is awakening life in many communities of the Schoenstatt Boys’ Youth, and most recently in Brazil. A Fackellauf team was set up to encourage the youth to commit to Joseph Engling this year, the centenary of his death. —

This year, the International Schoenstatt Family has the joy of celebrating to great jubilees: 50 years of the return of our father and founder to his Eternal Home ( +15/09/1968) and the centenary of the Engling Sacrifice (+04/10/1918). We are just a few months away from both these feasts.

We have read so much about the importance of remembering the Easter resurrection of these two great men and, through this memory, we form bonds with them.

But right now, what is really important is to draw attention to this time of grace and how we have prepared ourselves for these two celebrations. And perhaps, through this reflection, we will recognise that we have ignored Engling to a certain degree.

Fortunately, there are many initiatives around the “Father Kentenich Year” in Brasil Tabor (Brazil’s Schoenstatt magazine); however there are far fewer activities for the concurrent “Joseph Engling Year.” This may explain the difficulty we have in trying to awaken a closeness to one person (in the case of Fr. Kentenich), never mind two…

Attachments: from Engling to our father and founder

However, we should not forget how that organic love integrates: in the same way as we are certain that our closeness to Mary leads us to Christ, so too, we can say with certainty that an attachment to Engling will bring us closer to the founder. After all, wasn’t he the embodiment of the Founding Document? He was the first to understand and attach himself deeply to Schoenstatt’s three points of contact: (Fr. Kentenich, the MTA and the shrine). The first to see in Fr. Kentenich a father.

In fact, we can be certain that we will grow in our attachment to the founder in the measure that we walk with Joseph Engling in childlike and heroic sacrifice in all things, even life itself, for the Capital of Grace.

Uniting themselves with the desire to contribute to the spiritual erection of the future daughter shrine in the Archdiocese of Maringá/PR, and in order to celebrate the 20 years of their founding, the Maringá Boys Youth (Jumas) began their efforts to conquer the Engling Fire Bowl — yes the Fire Bowl will come before the shrine!

The idea emerged to hold a Fackellauf (torch run) between the Crusher of the Serpent Shrine in Londrina and the MTA wayside shrine in Maringá, not only to conquer this symbol which is so special to the Boys Youth, but also to celebrate the centenary anniversary of the person that the Engling fire represents. Therefore, between 28-30 September this year, Jumas Brazil will bring this idea to life.

While there is still time before these jubilees – which are not the finishing line but rather the starting point, in the continuous mission to restore the body of attachments — we are also looking to draw closer to the one we call our older brother, praying for his canonization, knowing more about his life, etc.

As brothers in the Covenant and following in the example of Engling, let us be heroic sons and actively involved in these jubilee celebrations, setting the world on fire with our charism: the formation of authentic and deep bonds!