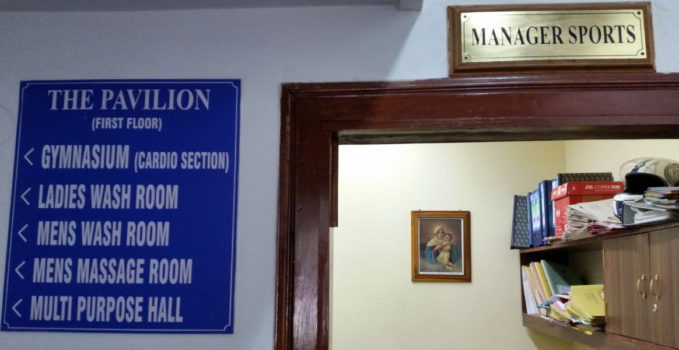 A few days ago, Fr. Simon Donnelly, a South African Schoenstatt Priest who works in the Vatican, got a Whatsapp message from India with a photo and a few words from an American, Ashley, who is married to an Indian, John, both exemplary Catholics.

“They live in Rome but are visiting in-laws in Goa. They know that I am attached to Schoenstatt and so they sent this photo to me from India a couple of days ago,” Fr. Simon shared.

And this is what — or shall we say, whom — Ashley and John found where they less expected!

“John and I were at one of our favorite spots, the Bangalore Club— a regal old club with a rich legacy that dates back to 1868, when it was opened as an exclusive club for British Officers. When at the gym, a certain picture hanging on the wall of the Sports Manager’s office caught my eye. It was Our Lady of Schoenstatt! It’s funny, because the manager also has Hindu and Buddhist idols in his office, so I don’t know how she came to be there. But I thought you might enjoy the picture of Mary sweetly peeking through the sports hall of his prestigious old Indian club.”

Not only did Fr. Simon Donnelly enjoy this, he also shared with schoenstatt.org, hoping that many would enjoy seeing a new spot where she is in and works…