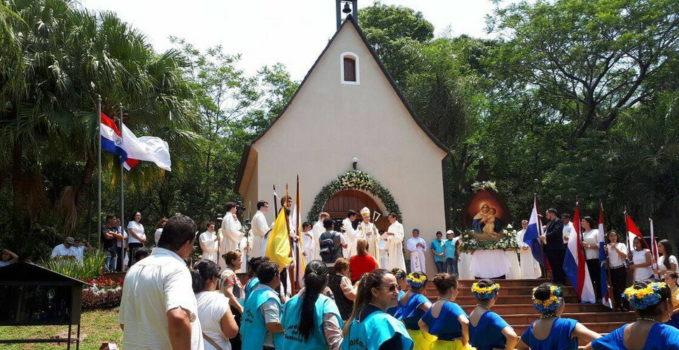 Today my alarm clock rang three hours earlier than usual. I had to do my work at the office so I could leave early for Tupãrenda. Early on, my cell phone’s screen displayed a number of messages on social media that needed to be read. There was no doubt that it was a special day.

I greeted the Blessed Mother in my Home Shrine telling her about my plans to leave work early so I could visit her in the afternoon at the Tupãrenda Shrine. I asked her to take care of my things, and I asked in a special way for her to help me receive the sacrament of reconciliation so I could receive communion that afternoon.

I finished the most pressing matters on the agenda that day, and I hurriedly left to meet my mother and a friend who was going with me.

We arrived at Tupãrenda with ample time to participate in Holy Mass.  The dashboard display read 40°C (104°F). So when we arrived in front of Holy Mary of the Trinity Church, we did what other pilgrims were doing, we looked for a shade tree to protect us from the sun. 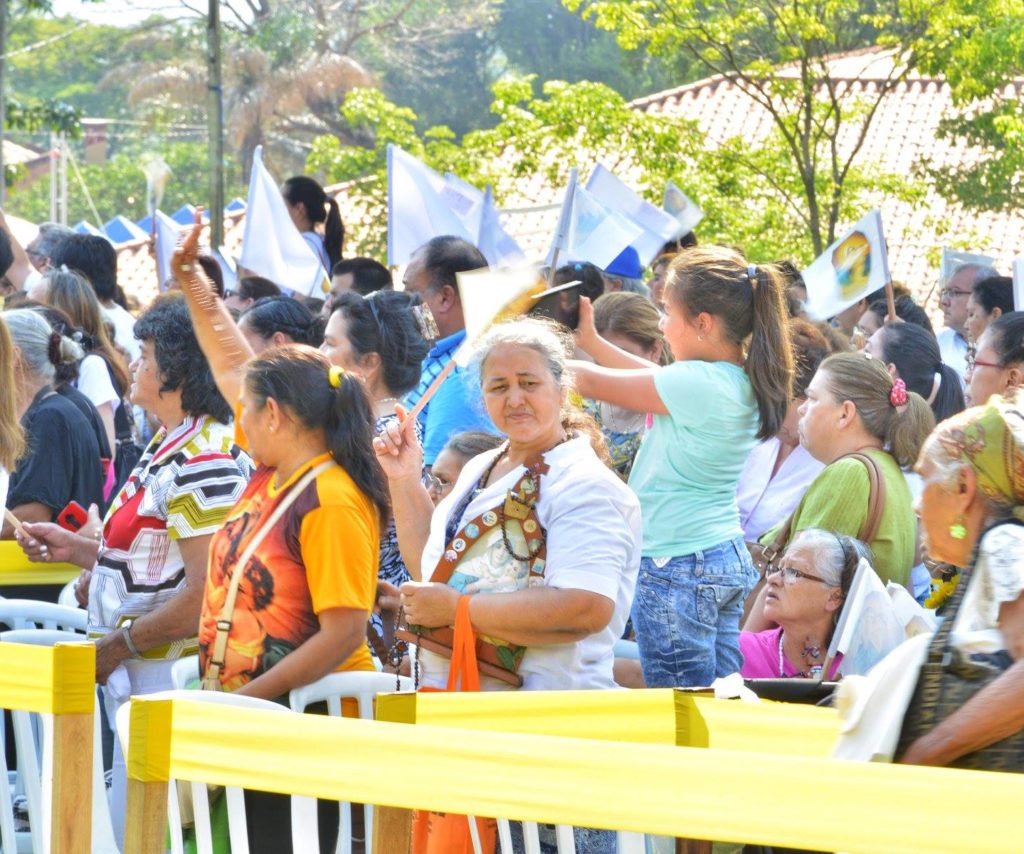 Once we found our place, I left my traveling companions and went looking for the confessional location. I found it in a long line under the trees near the Shrine.

I got in line, and I noticed something unusual happening, there were only two priests hearing confessions, generally there are four or five. This made me think that I would need extra patience in order to go to confession.

In time, I realized one of the priests had left, leaving just one. I looked at the clock, the third Mass of the day would begin in thirty minutes. I wondered if I would accomplish it, after all, this morning I had asked the Blessed Mother to help me to receive confession, and I was sure I would accomplish it.

Time passed and I looked at the clock again, now it was only fifteen minutes until Mass started and I counted the number of people in front of me. There were forty-seven! I calculated that in the best-case scenario, it would take 7 hours!

Then I thought: It would be better to leave and go to confession during the week. It was 18 October and I would not receive communion, however, deep in my heart, I sounded like an upset little girl who was complaining. How could this be, since I had asked Blessed Mother to help with this? I sighed and when I turned to get out of line, one of the volunteers came and said: “A priest has arrived who can hear confessions, problem is that he can only do it in English.” In my country, the official languages are Spanish and Guarani, so it is not usual for someone to confess in another language in Tupãrenda.

Then, I looked toward the forty-seven in front of me and no one raised their hand. This was my chance! It was the Blessed Mother; she was making everything easier for me! 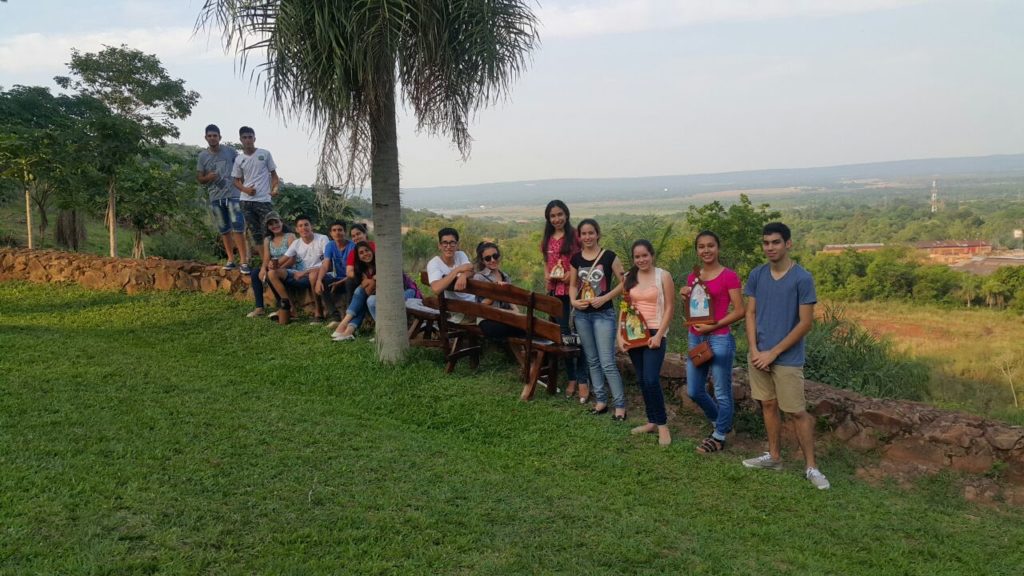 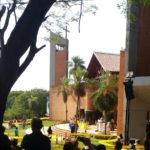 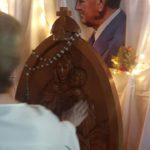 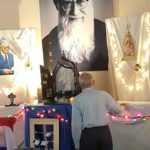 It is always possible to start over

I approached the priest, Fr. Reginald, he introduced himself, and he said he had come from Nigeria, and that he would be staying in Paraguay for a time.

I will share part of what he told me in a very paternal manner during my confession: He explained fruitfulness in spiritual life is very much like exercising the body, it does not happen from one day to the next; it is progressive, but to obtain results, you have be consistent. The first day will be harder, sometimes its hurts, but each day you will feel better, until one day, that which was very hard will become a habit; it will become a lifestyle.

There will be days when it will be harder than others, he told me, but that’s what life is about, to start over as many times as necessary. There is no easy way to live life, but with the grace of God and in covenant with the Blessed Mother it is always possible to start over.

I finished confession, I thanked Father, said goodbye, and I went to Holy Mary of the Trinity Church. When I turned, I realized that the priest was no longer there, and the same forty-seven plus a few more were still in line, and I had already finished. Then I looked toward the Shrine and winked at the Blessed Mother saying: “Thank you! I almost thought you had forgotten what I had asked you this morning and in reality, what I should have asked myself was: When have you failed me? Never! Because the Blessed Mother is always loyal to her Covenant of Love with me.”

When I reached the tree we had chosen earlier, I thought about how many small miracles the Blessed Mother worked this day for each pilgrim, with each of her allies. 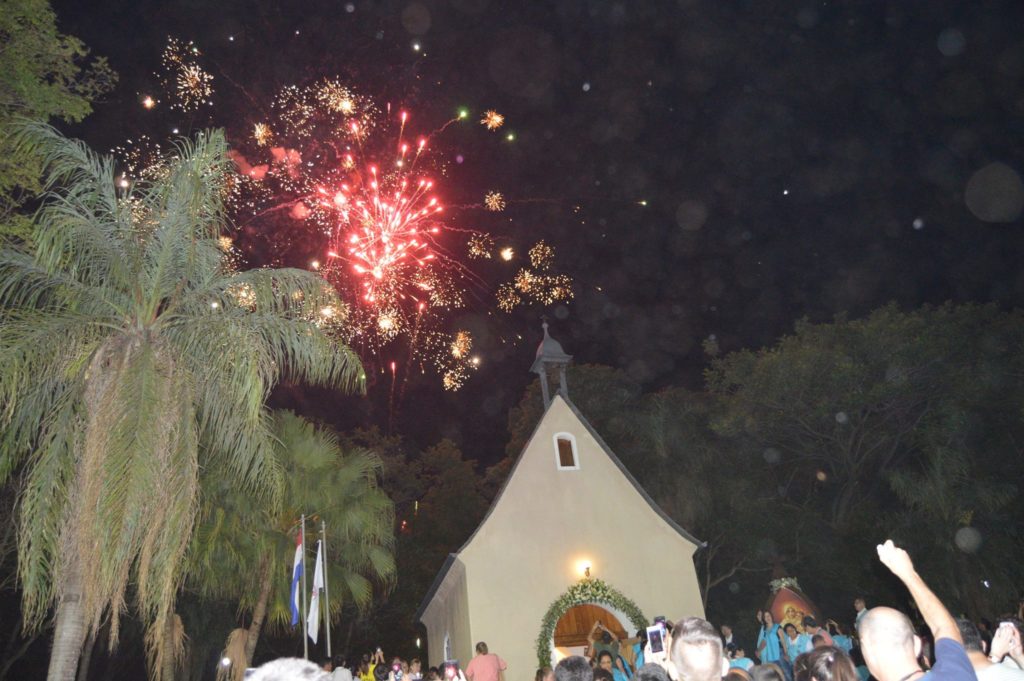