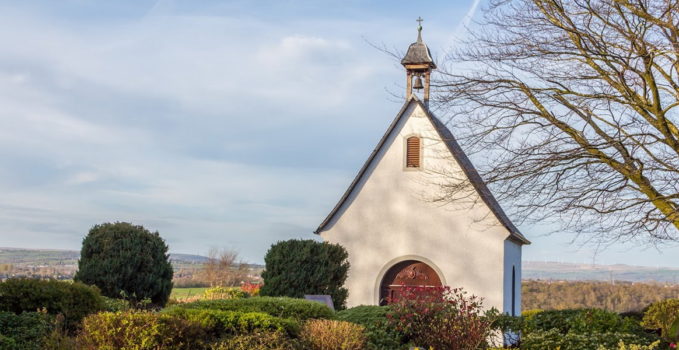 “Glorify Yourself!”- Crowning in Kearsley Shrine

The weather forecast was dire. The tail-end of the hurricanes that had devastated the Atlantic Coast of the USA was due to cross the UK during our crowning weekend with high winds and heavy rain. Our MTA would have to glorify herself. She did! The wind got up on Sunday night when everything was packed away again, and the rain, which we are used to, remained away when we needed it. Thanks to an ecumenical Scarecrow Festival in Kearsley the previous weekend, we were able to borrow seven gazebos to keep our displays and teams dry. And the people came! We had reckoned with about two hundred and we managed to fit even more in. An appeal to the parish and Movement for a box of small cakes from each household was by far exceeded, and in the end we were able to send the Brothers of Charity a bag of cakes, still in their boxes, for the homeless.

Through our Bishop, Bishop John Arnold of Salford, we had invited the diocese to come to the crowning, and many people came from all over the diocese and beyond who had never seen the shrine before. For them it was a “WoW experience”. The shrine was decorated with roses and lilies fit for our Queen, and people spent much time in prayer. She was never alone. People began arriving before midday. A large group of African ladies came in their blue capes, and their joy and enthusiasm was infectious. I was told afterwards that a refugee family from the Middle East was also there. All were made welcome with a liberal supply of tea or coffee to enjoy with their packed lunches. 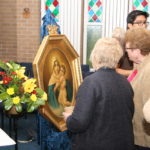 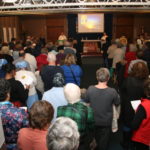 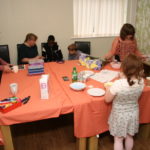 Holy Mass was celebrated at 1.30 p.m., during which two ladies from Liverpool entered into the covenant of love. In his homily Fr Bryan said that the crown, which had been sent away 3 months before to be cleaned and re-gilded, had been returned untouched. He interpreted it as symbolising us with all our dents and scars acquired along the way of life, which God will turn into gold. So with the crown we should not hesitate to give ourselves just as we are. The crown would still be re-gilded and small pearls would be added to commemorate the “Pearl Jubilee” since the crowning in Walsingham thirty years before.

After Mass and a brief pause for a tea break (so English!), a brief introduction was given to the Original Shrine and crowning, and how the English Schoenstatt Family had taken it up, followed by a survey of the day and the “Market Place”. The “market stalls” gave an insight into the covenant of love, the Pilgrim Mother, the work of the families and women, the mosaic in the garden behind the church and its spirituality based on the Schoenstatt Office composed by our Founder in Dachau. Tea, coffee and cake were served from two points right through the afternoon, while the Schoenstatt members tried to answer questions. The youth met in the Cottage, as did the children, who were occupied making a large crown of flowers that they carried into the shrine for the crowning. 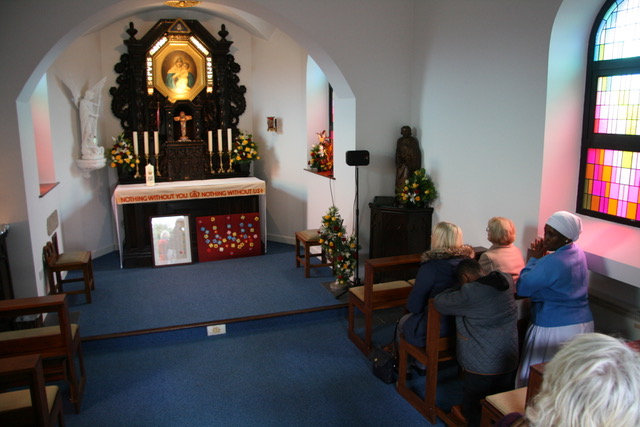 Workshops on the Home Shrine and Founder

At around 3.30 p.m. there was a workshop in the hall on the Home Shrine led by Liz Markland, a second generation Schoenstatter. It was accompanied by a slide show of home shrines projected onto the screen. When she had summed up her presentation, a large plastic box was carried in filled with small, framed MTA pictures, and the people were invited to set up their own home shrines. There was a rush to the front and in no time the box was empty. The Fathers were kept busy blessing the pictures from then on. It was difficult to settle the people again, but eventually they were ready for a workshop on Fr Kentenich to introduce the coming year of commemoration. Many people expressed the wish to make a pilgrimage to the Original Shrine to experience it for themselves. By the time all the questions had been answered, Bishop Arnold had arrived from a very full morning programme to preside at the actual Crowning. 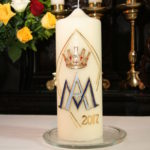 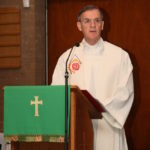 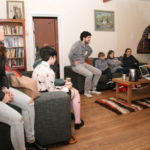 The Crowning by Bishop Arnold in the shrine

By 4.30 p.m. an expectant crowd had gathered in the hall for the Crowning Celebration, during which our Bishop invited us to answer our Holy Father’s call to become missionary disciples. This was taken up in the celebration, which led up to the crown leading the procession to the shrine for the Crowning. For those who were less fleet of foot, everything that happened in the shrine was projected into the hall so that they missed nothing. As many people as possible packed into the shrine and the singing nearly lifted the roof. Bishop John was quite happy not to climb the ladder, so Paul Cooper, our artist and the initiator of the crowning, was asked to place the crown on the picture for him. After the final blessing and hymn, Fr Bryan presented Bishop John with a replica of the beautifully decorated candle that would burn in the shrine in thanksgiving for the day.

It was well after 6 p.m. before the approaching storm hurried the last pilgrims to their cars and buses as the men helped to pack up and stow the gazebos, tables and chairs. We all agreed that it had been a richly blessed day. Our MTA had glorified herself, and will continue to glorify herself as she builds up Schoenstatt in England through her little missionary disciples. 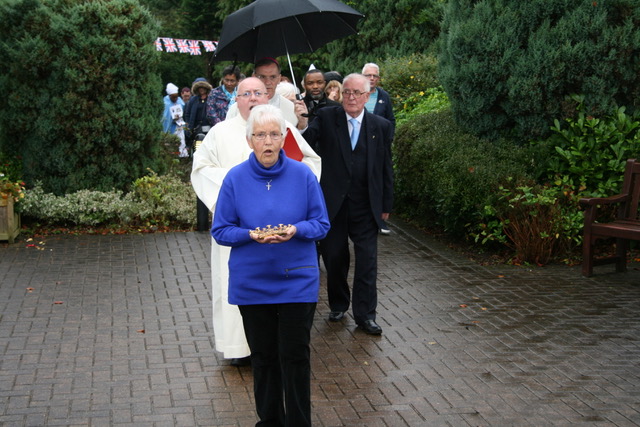 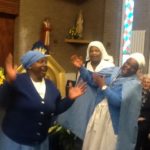 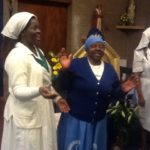 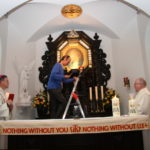