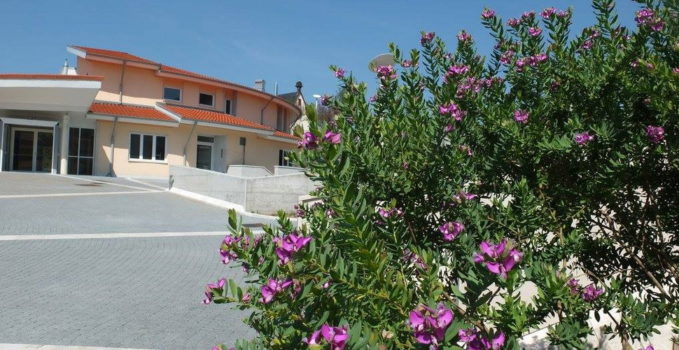 How I followed Belmonte’s construction thanks to the Internet

I arrived in Rome at the end of a pilgrimage to the Holy Land. Once in Italy, I stayed at Assisi for two days, and very early on a Monday, I took the train to the Italian capital. The majority of the passengers were beginning their workweek, some worked on their notebooks, and others read the newspaper. In my case, besides looking at the landscape, I was reviewing all Rome’s metro and bus maps that I had downloaded from the Internet, and which allowed me to reach my objective of arriving at the Belmonte International Center, Rome on Monday, 12 May 2014.

After an hour-long trip from Termini station and after getting off the bus, one immediately recognizes the place to walk toward since there are two flags at the gate: the Vatican’s and International Schoenstatt’s. Instantly, one feels: “I am already home.” From the entrance of the corner of Via di Boccea and S. Gemma, I noticed that there was a lot construction activity. There was a great deal of equipment, workers, bricks, pipes, and cables spread out and of course lots of dust. 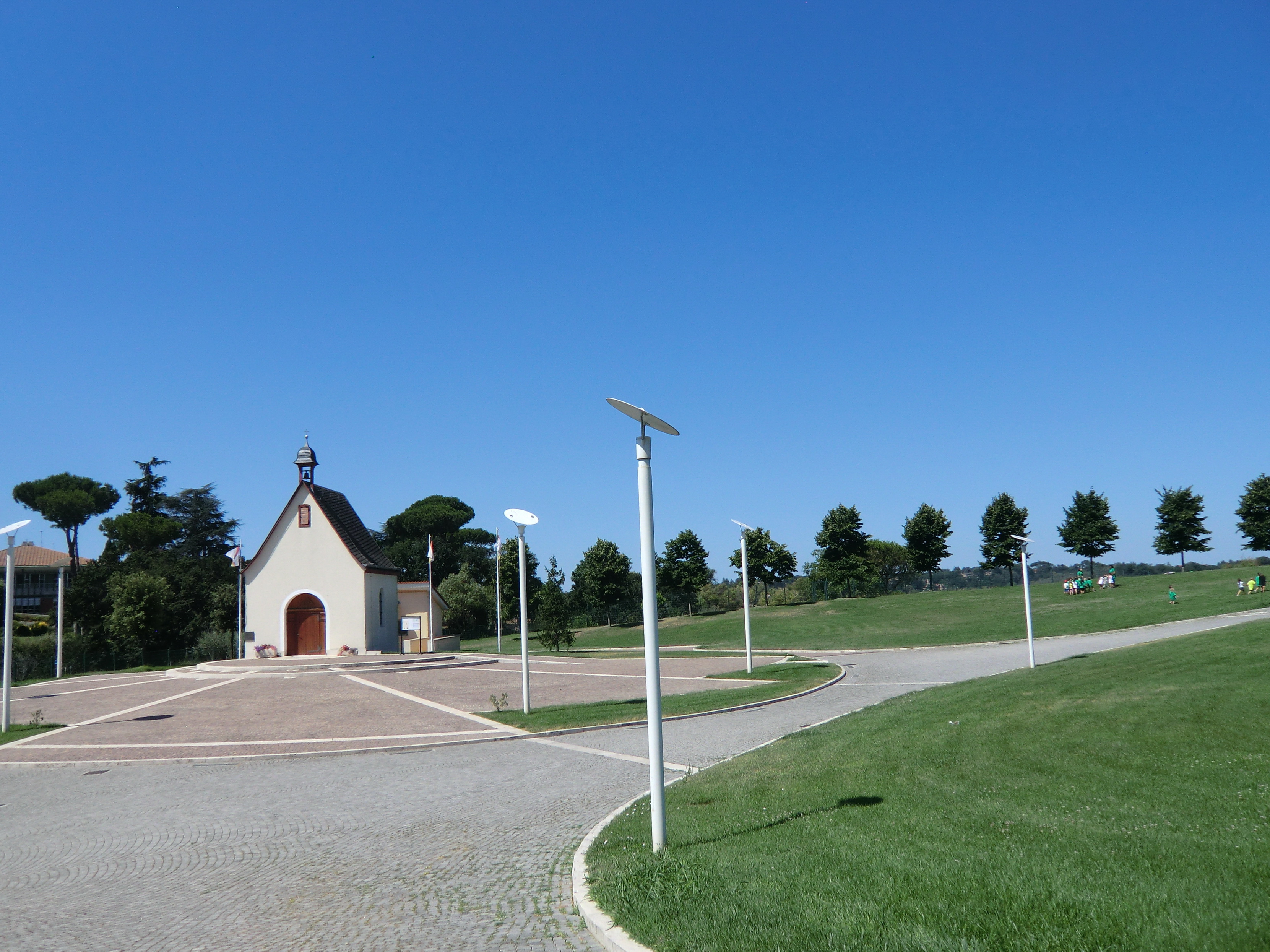 She welcomes us, in her smallness

However you can see something small in the center and in front of the construction: the Mother Thrice Admirable’s Wayside Shrine. She is the first one, who in her smallness welcomes us to Belmonte.

With my limited Italian, I asked a worker for the person who could guide me to get to know the place and fundamentally, to reach the “Shrine of all of us.” The street and its noise began to fade as I walked toward the grounds’ interior; I began to enjoy the silence of nature in Belmonte’s park.

Father Kentenich’s House attracts attention because of its semi-circular shape and unsymmetrical construction. It does not have a traditional house shape that I had seen in Florencio Varela or in Germany. Its design seemed innovative to me.

When I walked toward the Shrine, I tried to recall the video I had seen in Buenos Aires of the day that Fr. Joseph Kentenich visited in 1965. There was nothing here on that day! However, the presence of the Father and Founder with that small group that accompanied him was a milestone in Schoenstatt’s attachment to the Church. 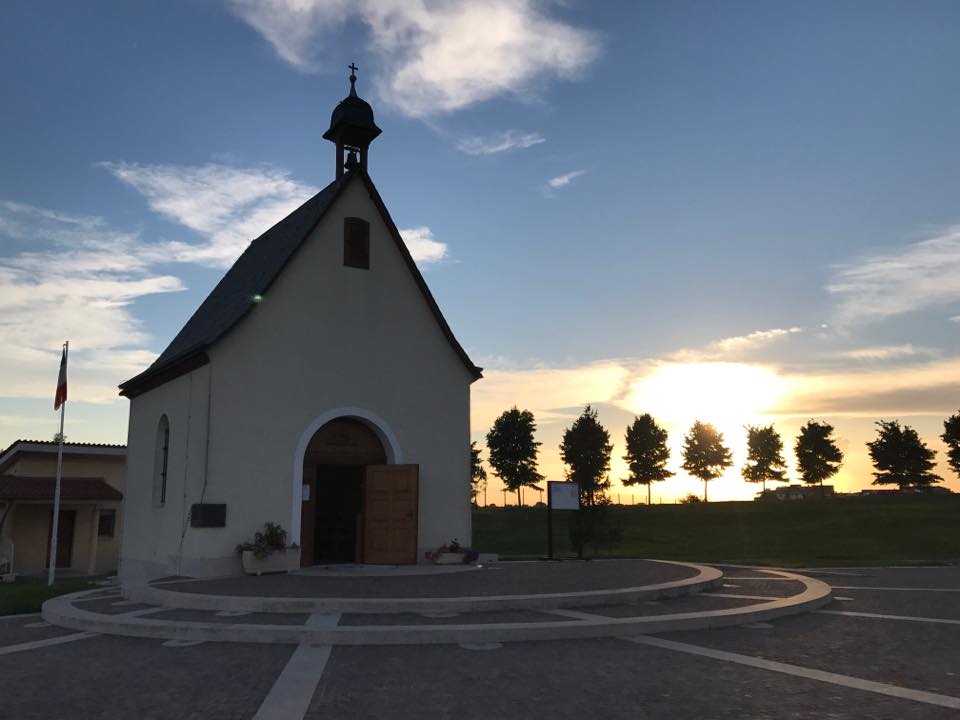 This Shrine’s own symbols

Upon entering the Shrine, the gaze first goes to the picture of the Blessed Mother and her Son. We always arrive seeking her embrace, which shelters us and reminds us: “This is my homeland, it is my Schoenstatt land!” Then looking around, they begin to discover each one of the objects and symbols that are there: the Ave Maria picture, the St. Michael statue, the Father Eye and the symbols that are there in addition to the comparisons about characteristics of the symbols with those of other Shrines that one frequents or has visited. The color of the wood, the metal, the stained glass windows, the cross… Things that are proper to Belmonte are the picture of the Holy Family on the left, and the jars that every country presented for blessing in 2004.

I was at the Belmonte Rome Center for several hours on that day, and two days later, I returned to Argentina. Since then, I have seen the Center and the Father Kentenich House grow through articles I read on schoenstatt.org and upon receiving the Belmonte Rome Bulletin.

How I followed the Belmonte construction

A few months after my visit, the youths who began the Fackellauf (the Torch Race) passed through there toward Schoenstatt. Three weeks later, the pilgrims from allover the world came to celebrate Schoenstatt’s 100 years’ Jubilee in Germany, and they passed through the Belmonte Shrine before meeting with Pope Francis in Rome. The House was especially prepared to welcome them. They organized places for the encounter and for everything that corresponds to a pilgrimage: refreshments, coffee, book and souvenir shopping.

Then I found out about the projects to help so that the Belmonte Rome Center would really belong to “all of us.” That is how I learned about the initiatives “A room for every country”, sponsoring doors and windows, and the Wayside Shrine Current.

Belmonte belongs to all of us!

In 2015, I followed Belmonte’s activities and growth more closely since Fr. Daniel Lozano was the Rector; he is an Argentinean priest, who I knew from Schoenstatt events in my country.  The day he assumed that post, he said a phrase that was very telling for me: “Belmonte is not German, it is not Italian, it is not Argentinean, rather, it belongs to all of us!”

By then, it was no longer necessary to rent tents since the Masses were celebrated in the House hall. Objects for decorating the rooms began to arrive, and every visitor wanted to see how the room for their country was coming along, and what could be seen from its window.

Later the names for the halls were also defined: “Gertraud” Hall (for Gertraud von Bullion, the first Schoenstatt woman), “Reinisch” Hall (for Fr. Franz Reinisch), and the João Luiz Pozzobon Hall, where the large picture of the Schoenstatt Pilgrim Mother is being made with photos from wayside shrines from allover the world. 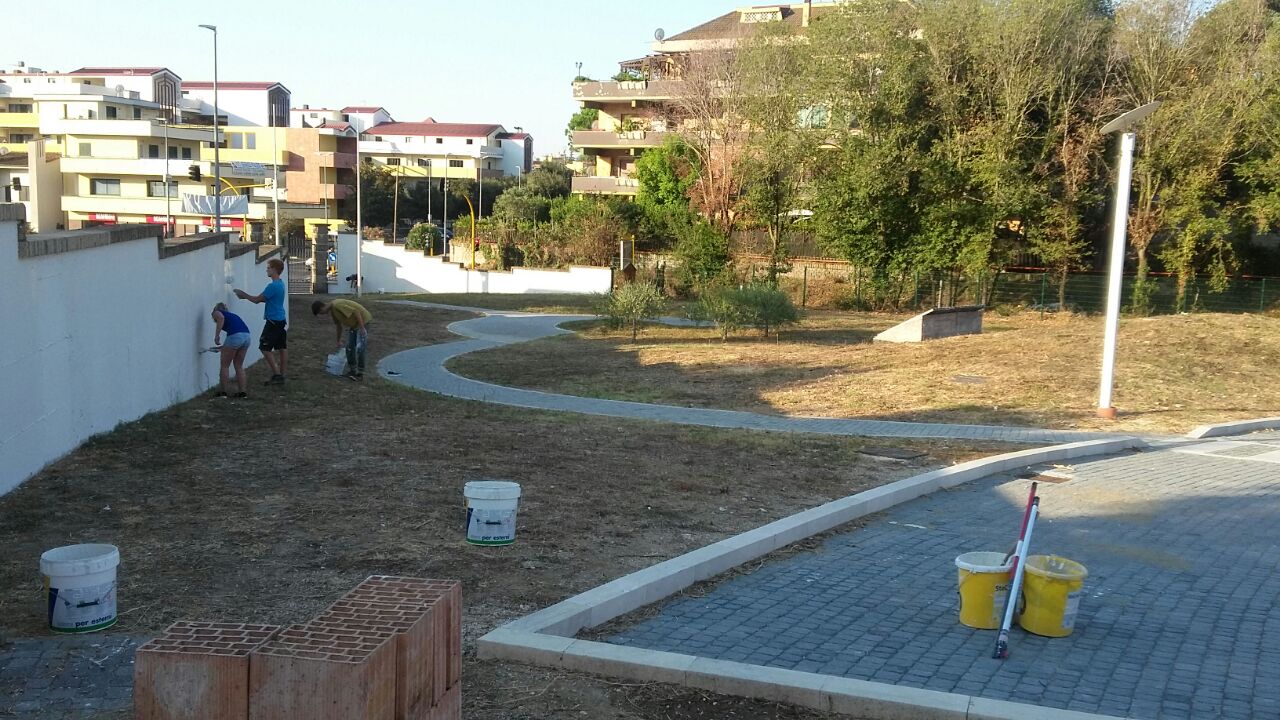 Youth working at Belmonte during their summer vacation

A brief news item that went unnoticed by many, but caught my attention was one about the dozen of youths, a priest, and a couple who donated their vacation time in 2016 to go to work at Belmonte, to sort, carry and place stone pavers, and to hammer them strongly in place to transform the sandy and uneven ground into a level space that would be used for a car and bus parking lot.

We also learned about other reports such as “Belmonte’s tomatoes,” the creative gatherings in Germany to make Belmonte known or Gianni and Elena’s stories, who with their  work contribute to the construction of this Schoenstatt center in Rome. We can all contribute. Every person, every prayer, every minute, every donation, all of it adds up for the construction of the International Belmonte Rome Center. 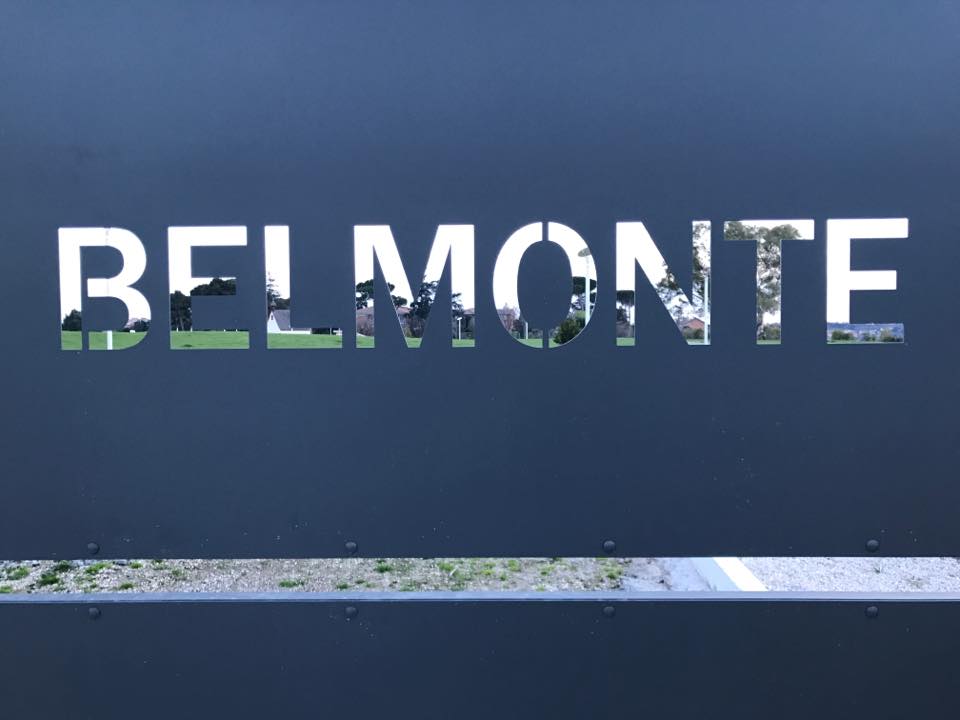 View through the upper entrance door

In 2017, Fr. Marcelo Cervi became Rector, and several videos emerged as a way of communicating Belmonte’s news. During Lent, a picture of Pope Francis was placed in the Shrine to show that “Here, we pray for Holy Father Francis every day.”

The pastoral program continues to add activities to open Belmonte to the universal Church, and it has already set its calendar until August 2018.

The last bulletin, announced the news: Domus Pater Kentenich will open its doors on 16 November 2017!

The letter sent on the 4 July by the Rector General Dr. Christian Löhr and Fr. Marcelo Cervi, Belmonte’s Rector, joyfully expressed that:

“Finally the time has come! The gift that the General Presidency of the Schoenstatt work had promised Fr. Kentenich can now be completely fulfilled. More than fifty years have passed for the construction of what our Father and Founder received for his 80th birthday on 16 November 1965, which was shown in a model. It is a joy and an honor to personally invite you through this letter to the inauguration of the International Pilgrim House Domus Pater Kentenich in Belmonte. On that day, we want to celebrate the completion of the work at the Schoenstatt International Center in Rome, along with the many friends who have sponsored and contributed to Belmonte, among them the youths who have helped with the construction.”

For now, it is my desire to step in the Belmonte Rome Center once again.  I do not know when I will. But I am convinced that every time I place a little paper with my contribution to the Capital of Grace in my Home Shrine, in the Covenant of Love with Mary, I am also placing it in the Belmonte Shrine jar. 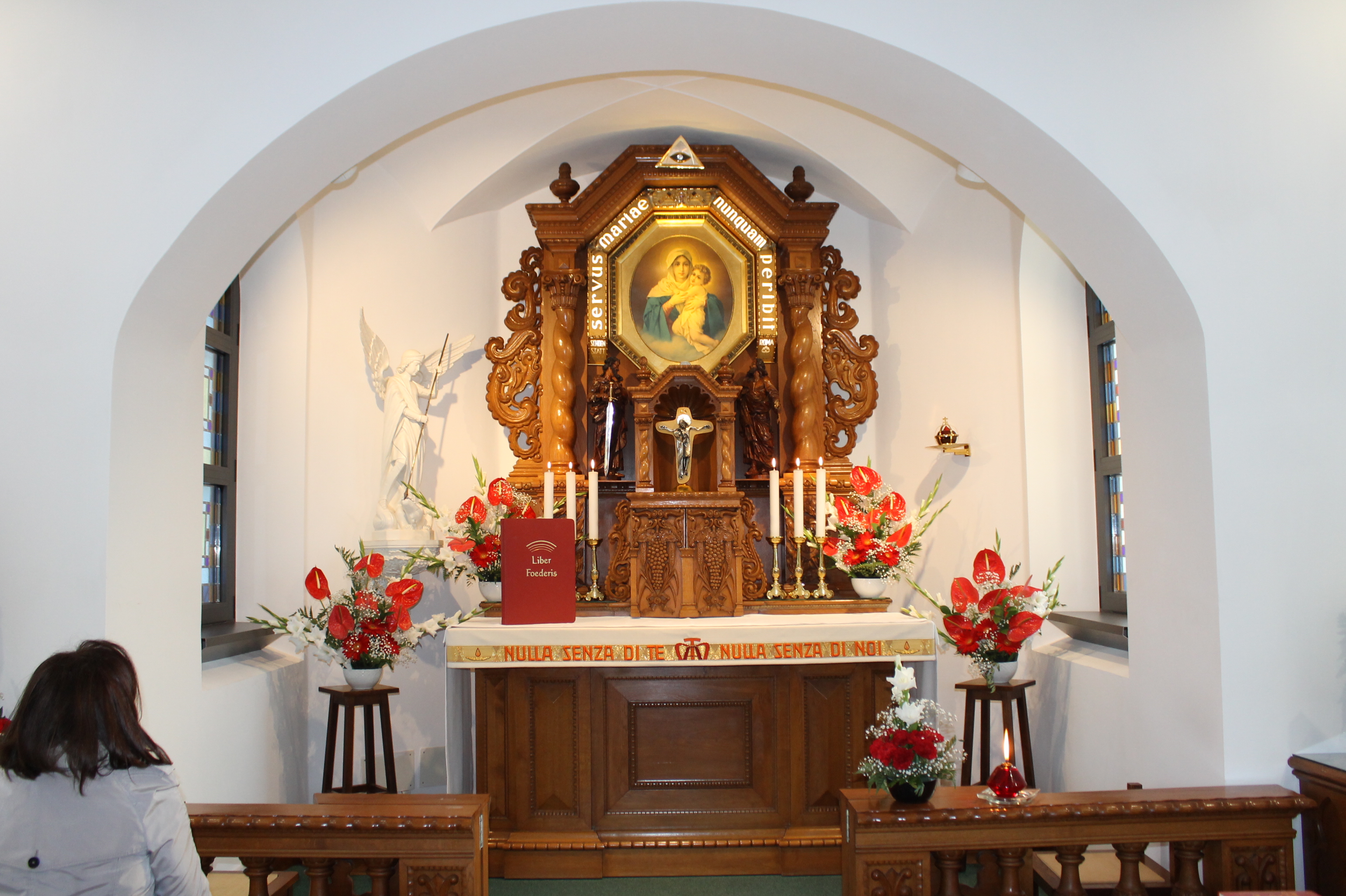 Read the Newsletter from August here