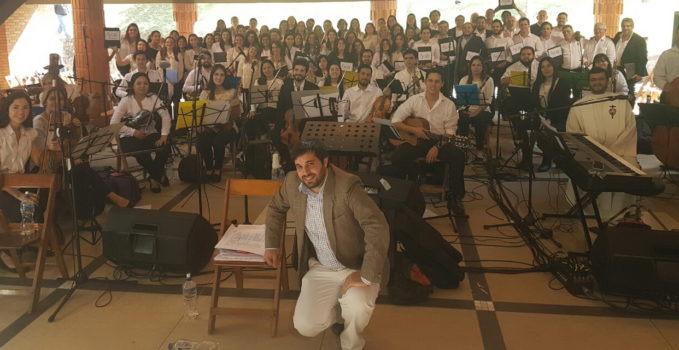 This was not easy, but it was a source of joy

The decision and the total commitment to a personal vocation is also expressed as a manifestation from the basis that beauty emanates: God, who is the foundation stone of life. Music is the basis of my vocation, my vocation as a child, father, my vocation as educator, my Schoenstatt vocation, my Christian vocation. I find God in music, but in it, God found me first because He sang to me first. In this immense gift of hearing God’s voice in music, I feel called to serve through it as an echo of that song with which God came to the door of my heart, with Mary.

Coming together as one

From this encounter as a crucial experience and within this context, I was able to lead the magnificent Choir Alegria (Joy) for the “Reception of the Sion Alb.” When we assumed the task, we put our shoulders to the challenge of preparing for 8 July, by giving the beauty of music as a way to unite the people’s hearts to God and Mary, and especially in the hearts of the twenty-one novices who had decided on a priestly vocation. It was not an easy task at all, even more so since I was not a professional. Therefore not having all the tools to make this service better, it was not easy standing and directing a choir of about seventy choir members and twenty-eight professional musicians in an orchestra. During several rehearsals, I felt surpassed by something that I was not technically prepared to lead. However I was not alone, being given the clarity that I could not exist as a director without a choir, without voices, and a choir cannot exist without a magnificent team working together so that it could be accomplished, much as light could not exist without darkness.

We all worked from different fronts having worked spiritually, musically, and also in raising funds. We were greatly united in all of this, and the choir became a family. This was God’s most generous experience, to realize that this choir was not only the sum of its parts, the sum total of voices creating sound, but rather it was a total union forming a whole. It was unanimity, one soul, the same spirit manifesting itself and providing a religious culture, re-uniting hearts to which he sang to first and whose beauty we sing of, as a service and expression of God’s love for us and for others. Joy consists of this.

8 July was one of those days that constituted a mystery of glory and joy for the novices, for the Community of Sion, for the Schoenstatt Family, for the Church of the world, and the choir that wanted to be a part of this generous contribution that had been accomplished with the help of many people. It was not easy, but it was extremely beautiful and comforting, because there is more joy in giving than in receiving, especially when it is about music, we made that way of coming and going with Jesus and Mary who first sung to us first with generous love.