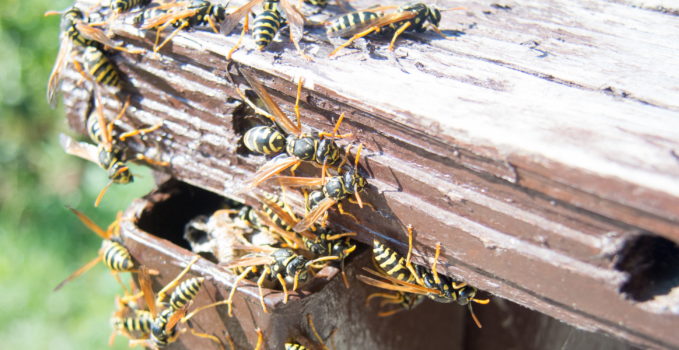 About wasps’ nests, street children and the Kingdom of God

A wasps’ nest on a balcony in Siegburg, Germany, is annoying, but certainly not a subject for an article in schoenstatt.org. However, when the wasps’ nest ends with an encounter with Fr Josef Neuenhofer and his project, Arco Iris, for street children in La Paz, it is. Yet that wasn’t the end of it. …

The head of the pest control firm nearby arrived on Saturday afternoon shortly before midday. He was dressed in protective clothing and brought with him whatever you need to remove a wasps’ nest, including documentation. Before he started, I thanked him for coming so quickly at the weekend. I was allergic to wasp stings, I added rather sheepishly, otherwise I wouldn’t have been so hysterical; not even the mosquitos in Paraguay could frighten me like this. “Yes, they really are dangerous, they can give you Dengue Fever or Zika …” He’s a professional, I thought, and before I could think it through properly he asked: Were you there? Professionally?

I was on holiday, but actively; and then he reacted like so many others who can’t get away quickly enough when I start to tell him about the Hundred Houses, the Youth Prison in Itagua and the house Madre de Tuparenda. … “That’s how I like to take a holiday”, he told me. “It is much more interesting than lying on the beach …” He then turned to deal with my wasps, but when he got to the documentation he said, “I am really impressed by what you told me about Paraguay.” Then, “I was in Bolivia a few years ago, and I also had a wonderful experience. My daughter spent a volunteer social year in La Paz, that’s why I visited her. She was working in a project for street children. There was a priest there, a German …” “Arco Iris?” I asked in amazement. “Yes, Arco Iris, Rainbow”, he replied. “Was the priest Josef Neuenhofer?” … “Jose, Jose Neuenhofer, was his name”, he said. The Federation Priest Josef Neuenhofer.

“He was the one who did things for the street children, really impressive”, he said. “He is completely in line with Pope Francis, a poor Church for the poor!” “I left the Church years ago”, he told me. “And I had every reason to do so. The social commitment of the Church is the only good thing about it, I must say. What Jose Neuenhofer does, is good, it’s very good, and I admire it wholeheartedly.” “So do I!” I said. “Social commitment counts.” It was so simple then to tell him I am a practicing Catholic. It didn’t worry him in the least. We talked about Arco Iris and the Hundred Houses and the Youth Prison, and what his daughter was doing at that moment in Benin in Africa. We spoke about where the world was going up in flames, and where, thanks to people like Josef Neuenhofer, it is becoming a little bit more whole.

“I send a monthly donation to La Paz”, he said. And while we shook hands warmly on that 8 July, the anniversary of Fr Kentenich’s ordination to the priesthood, I thanked for a Movement in the heart of the Kingdom of God where two people met (even though they didn’t know about each other), and he was in their midst.

If in our ramshackle world only one child less is weeping, the world is a better place. I can’t change the world, but I can make it more human.
Josef Neuenhofer