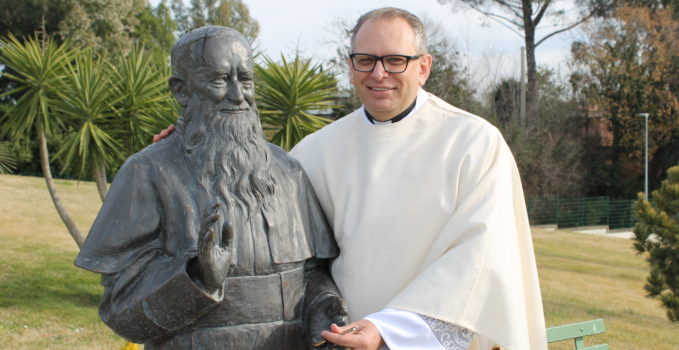 Schoenstatt’s Mission for the Church can only be carried out together, with all, in the covenant

22 January 2017. The 2017 Family Misiones is starting in Ranchos, in the province of Buenos Aires, supported by prayer and accompanied by Schoenstatters on various continents. Seventy-five young people from a number of countries in South America and Austria have met in Villa Cura Brochero at the end of their pilgrimage on foot to the grave of the first Argentinian saint, and handed over to him the prayer intentions of people from even more countries. In Rome and around the world the Pallottine Fathers are celebrating the feast of St Vincent Pallotti, the Apostle of the World Apostolate, whose mission so fascinated Fr Kentenich. Worldwide, international. “The tendency to be worldwide, the striving to be international, the longing for a world apostolate, simply runs in the Family’s blood”, he said in 1948.

It is a saying that is highly topical in these days of “America first” taking office, the ascendency of a nationalism many had thought overcome, the populism and protectionism of France first, then Holland and Hungary first, and prosperity first and me first … On the same 20 January that filled many with concern as the new President assumed office in Washington, the new Rector General of the Institute of Schoenstatt Diocesan Priests, Dr Christian Loehr, was inaugurated into his office along with his Council composed of priests from Germany, Burundi and the Dominican Republic. His first official act took place on 22 January to introduce the new Rector of the International Schoenstatt Shrine in Rome, Fr Marcelo Cervi. He is a Brazilian priest whose first words as Rector showed which way the wind was blowing, and will blow, at this place in the Pope’s city: “Belmonte, that is to say, Schoenstatt’s mission for the Church can only be carried out together in the covenant. All together – the diocesan priests, the Schoenstatt Fathers, Sisters of Mary, the Institute of our Lady of Schoenstatt, pilgrims, families, Federations, missionaries of the Pilgrim Mother, Brazilians, Italians, Argentinians, Germans, youth, adults, pensioners, everyone.”

On 22 January, 2.23 p.m., a few minutes after the “family” lunch had ended, he said to me, “Maria, have you got your camera with you? We have to go to the shrine quickly and record a video message for the Schoenstatt Family in Costa Rica, for the dedication of their shrine.” 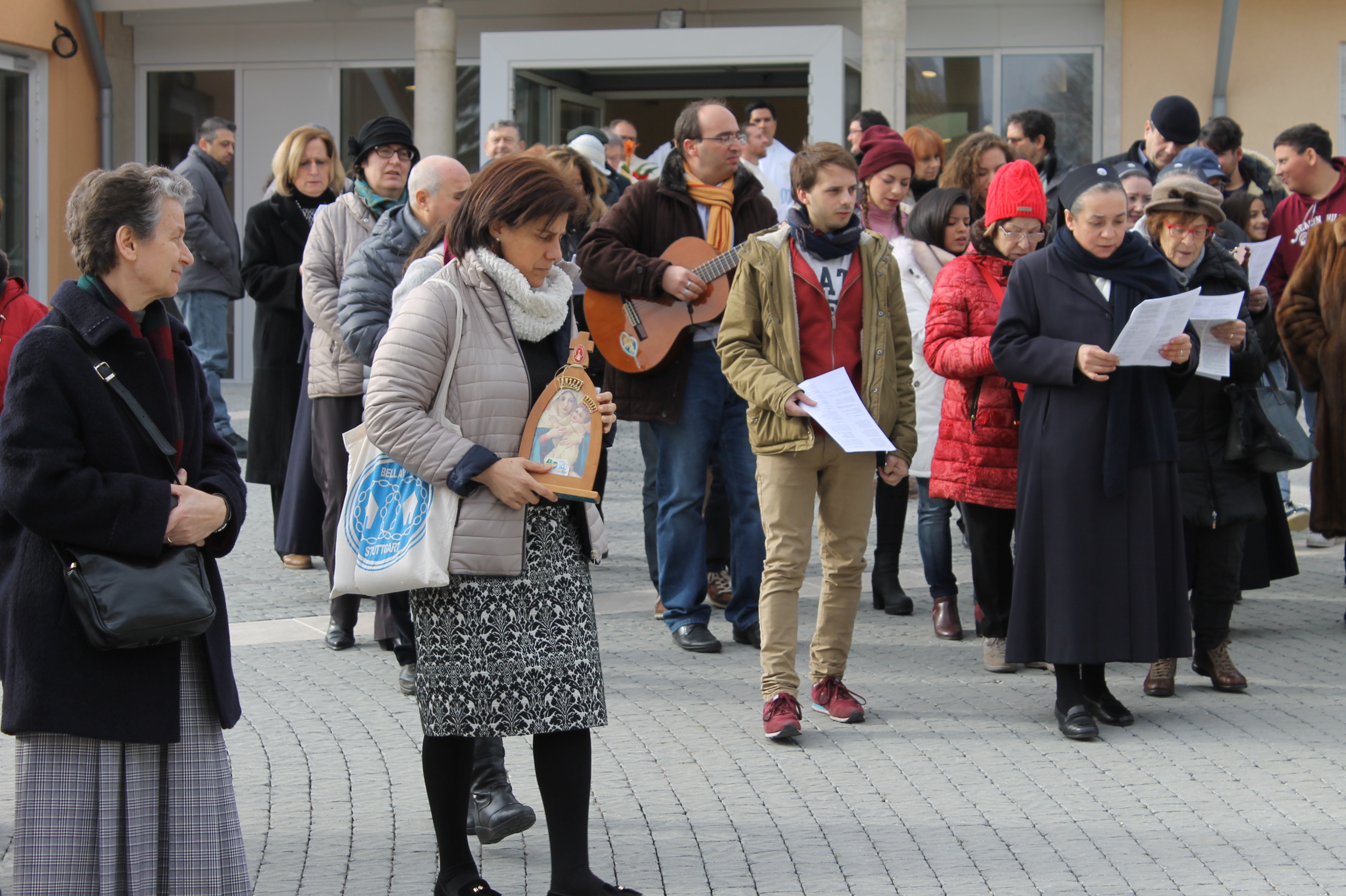 From the small wayside shrine …

The celebration began on this increasingly sunny Sunday morning in Belmonte at the wayside shrine at the lowest point of the property, a witness of the simple and courageous start of what we today call the International Schoenstatt Centre in Rome. It witnessed the blessing and vision of Fr Kentenich for this place, which he connected with his concept of a new Church, the Church of the Second Vatican Council, which Schoenstatt had been graced to anticipate. It is now Schoenstatt’s task to carry out this vision with the Church and in her service.

Dr Christian Loehr introduced the members of the new General Council of the Institute of Schoenstatt Diocesan Priests and greeted all present in Italian, and then briefly also in German. The Schoenstatt Fathers from Argentina and Paraguay, who work in the parish of St Patroni in Rome, which increasingly becomes the point of reference for Schoenstatters in Rome, especially the youth, were also there, as were a number of Sisters of Mary from the Cor Ecclesiae Shrine – Brazilians, Argentineans and Paraguayans; members of the Institute of Our Lady of Schoenstatt from Chile and Italy; Brazilian priests belonging to the Institute and the diocese of Fr Marcelo Cervi, who are studying in Rome; as well as Aloisia and Albert Busch from Germany, members of the Institute of Schoenstatt Families, and many Schoenstatters from Italy and Rome, along with many Romans who had not been born there, as Dr Loehr jokingly remarked. Even though many “Roman” Schoenstatters weren’t there, the few minutes when the various nationalities indicated their presence by raising their hands showed clearly that Schoenstatt in Rome is international, because Rome is international; hundreds of priests and laity from all over the world study and work in the heart of the universal Church. 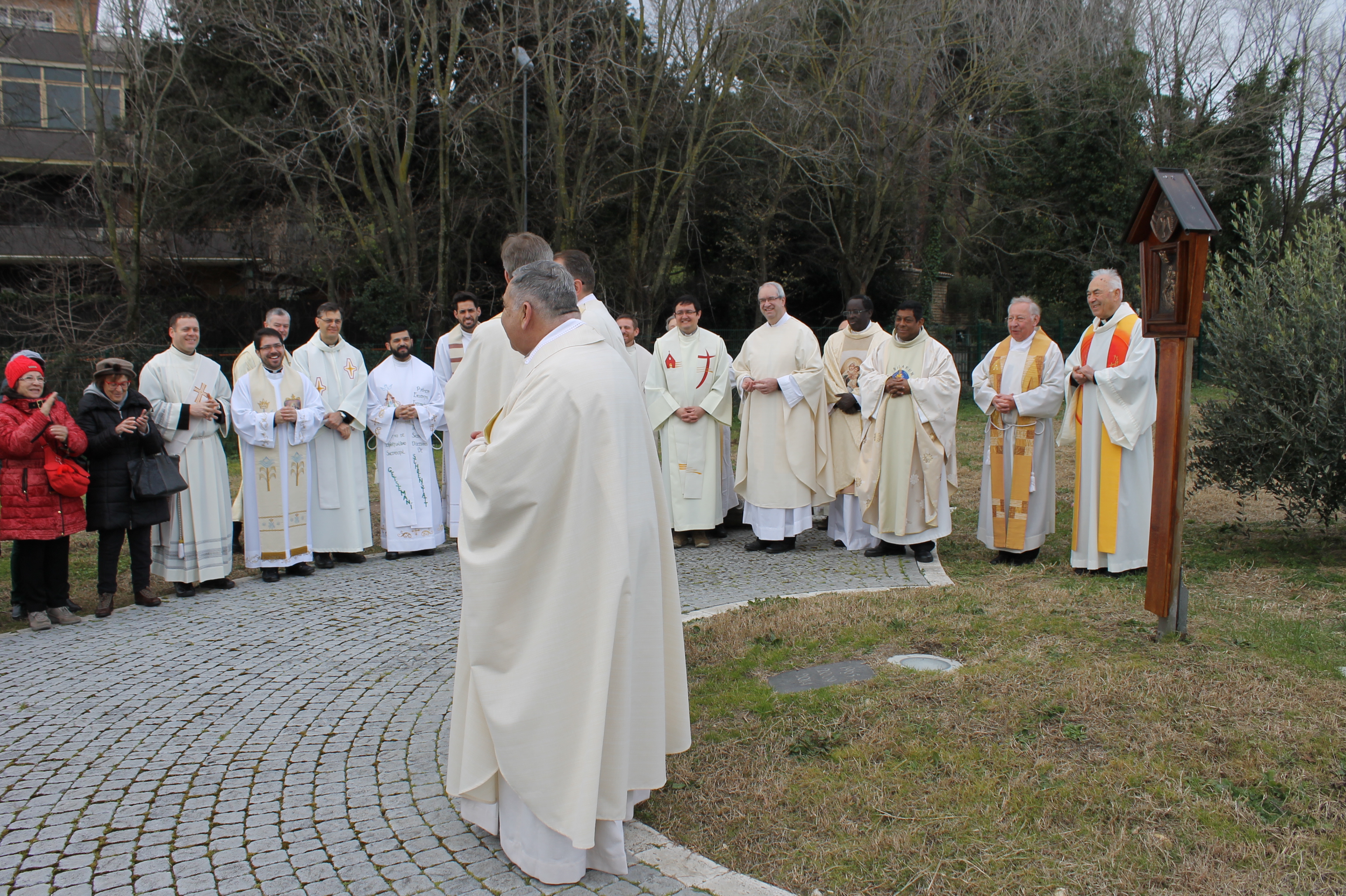 … via the Domus Pater Kentenich …

To the accompaniment of guitars and singing the procession formed and made for the entrance to the Domus Pater Kentenich, where important events had already been celebrated on many occasions. From its conditions you can see how the building operations are progressing, as Sr Yvonne remarked tongue-in-cheek. The new Rector and the festive gathering were welcomed in the entrance hall not only by flower arrangements prepared the previous evening and a professional public address system, but also by electricity and light and a selection of the jars from the various countries presented at the dedication of the shrine on 8 September 2004.

In this way Bolivia and Brazil, Argentina and Burundi were present in their jars. The choir and orchestra of the Roman Schoenstatt Family, led by Sr Giulia, accompanied Holy Mass with joyful and festive songs that told of farewell, transition and a new start.

Fr Daniel Lozano was thanked for the two years he had served at Belmonte, and he thanked his community and the Schoenstatt Family for their support. He will return to Argentina on 10 February. Msgr Peter Wolf was also thanked for the twenty-four years he had spent in office as the Rector General of his community. His words of gratitude and farewell – he spoke in German and Dr Christian Loehr translated into Italian – touched on what he admitted was the darkest and most difficult moment in his term of office, when in the Spring of 2014 the first Rector of Belmonte, Fr Stefan Mueller, had resigned from office on health grounds.

He expressed his hope that now, after all the difficulties, Belmonte would be able to carry out its mission in the service of Schoenstatt as a whole and the Church. Dr Christian Loehr then officially presented Fr Marcelo Cervi with the keys of the shrine and the decree of appointment. Children presented flowers to all present as a sign of gratitude and a promise of co-operation. Mr & Mrs Busch expressed the welcome of the Rome Board of Trustees and all applauded those who were taking leave, those who were making a new beginning, and those who would remain … 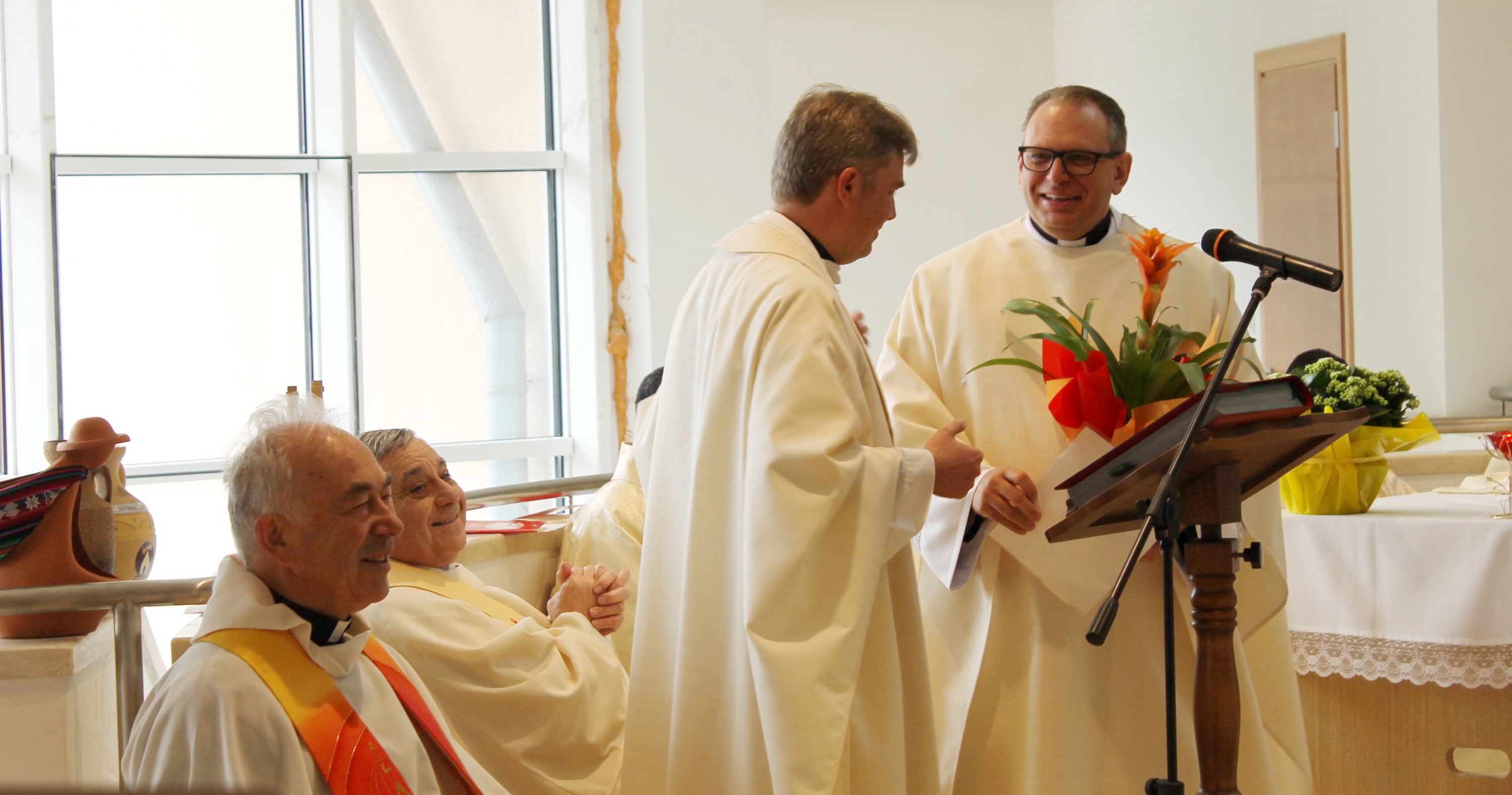 There can only be connection if the door is open

Collaboration, togetherness: that was the golden thread through Fr Marcelo Cervi’s sermon. At first he spoke in Italian, but when he knew that the live transmission was working, he addressed the Brazilians who were present and his fellow countrymen in Portuguese.

“Belmonte, that is, we can only carry out Schoenstatt’s mission for the Church if we work together; all of us, in the covenant of love. All of us together – the diocesan priests, the Schoenstatt Fathers, the Sisters of Mary, the members of the Institute of Our Lady of Schoenstatt, pilgrims, families, Federations, Pilgrim Mother missionaries, Brazilians, Italians, Argentineans, Germans, youth, adults, pensioners, all of us.”

With a pinch of dry humour he recalled his holiday in Rio de Janeiro with its sunshine and summer temperatures, followed by his arrival in wintery Rome, not to mention the minus 10 degrees in Germany! All could feel his Brazilian warmth and cordiality, ready to “warm up” Europe’s cold weather. “Then we can leave the entrance door open”, Davide Russo whispered. He is responsible for the video and livestream transmission. “Door closed – connection gone. Door open – everything works marvellously.”

He’s right – there can only be connection if the door is open. That applies not only to livestream transmission of this morning, but to Belmonte, Schoenstatt, the Church and world.

Open door and “Hope of Belmonte”

Fr Marcelo Cervi again related the story he had passed on in the last Belmonte Newsletter and schoenstatt.org about the discovery of the statue of Our Lady in Aparecida with the title “Our Lady of Hope of Belmonte”. Of all things at Aparecida with its message that is so important for Pope Francis!

A breath of a new era, of Advent for Belmonte. 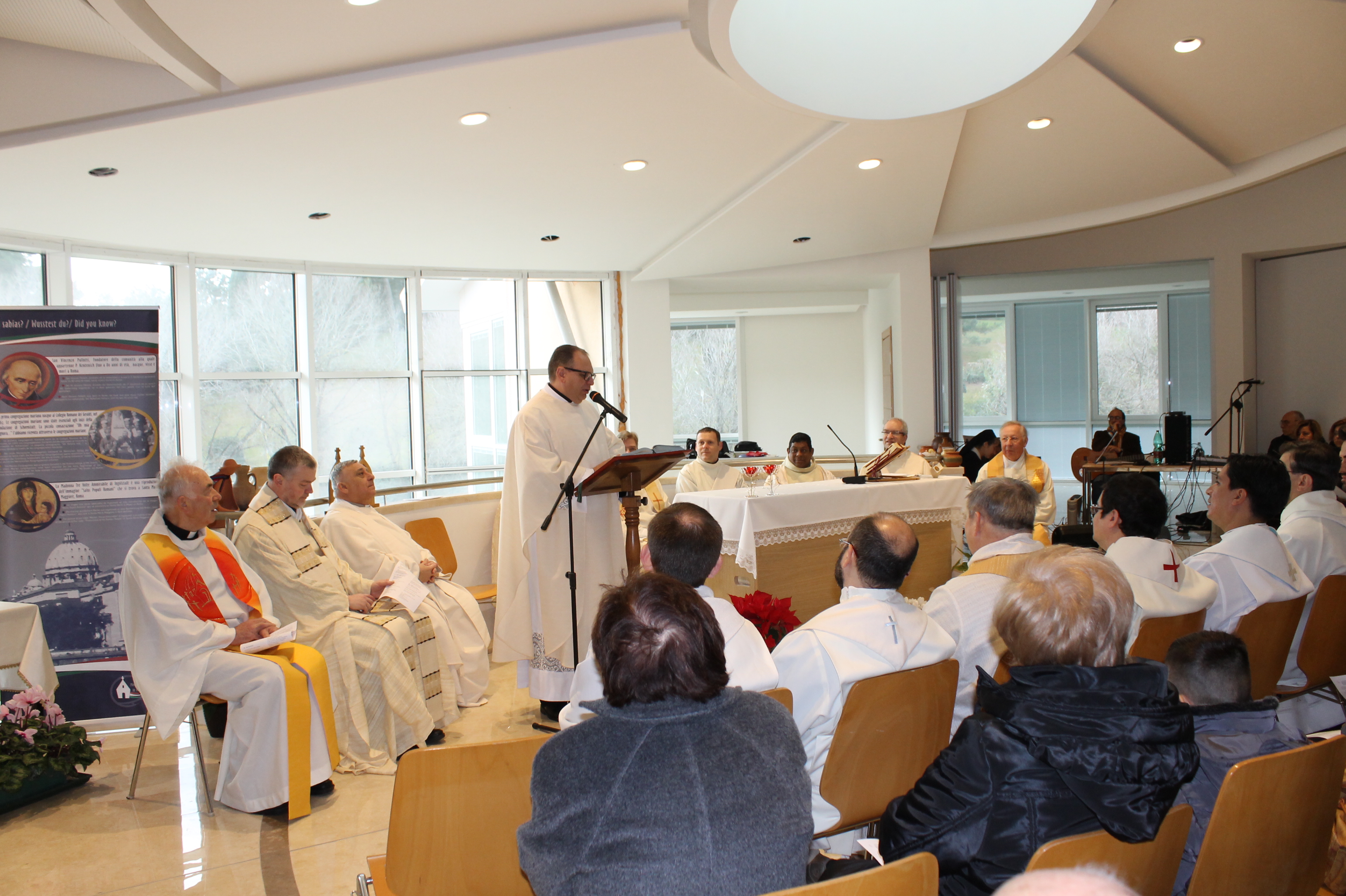 … up to the shrine of all of us

We have to move, to go out. The procession up to the shrine is like a sign. In the shrine, and around it, all again consecrate themselves to Mary, the Mother Thrice Admirable of Schoenstatt. All who are in any way connected with this shrine are present. “I would like to send a letter of thanksgiving to all the wayside shrines that already have their photo in Belmonte, along with a sort of certificate they can put up somewhere”, Fr Marcelo said. He is well aware of the spiritual current of the wayside shrines for the Pozzobon Room in Belmonte. He was holding the present he had just received: A framed picture of “Joao Pozzobon of Belmonte”.

Afterwards all were invited to lunch and a family gathering during which Italian, German, Portuguese and Spanish communicated with much laughter and many gestures.

As they all returned to Belmonte, and the guests made their way home, Fr Marcelo went to the shrine, took the little jar from Costa Rica and its ribbon with the national colours, and sent a greeting to the Schoenstatt Family in Costa Rica for 18 March and the dedication of their shrine. He closed with the words: You are always present here.

That applies not only to Costa Rica. 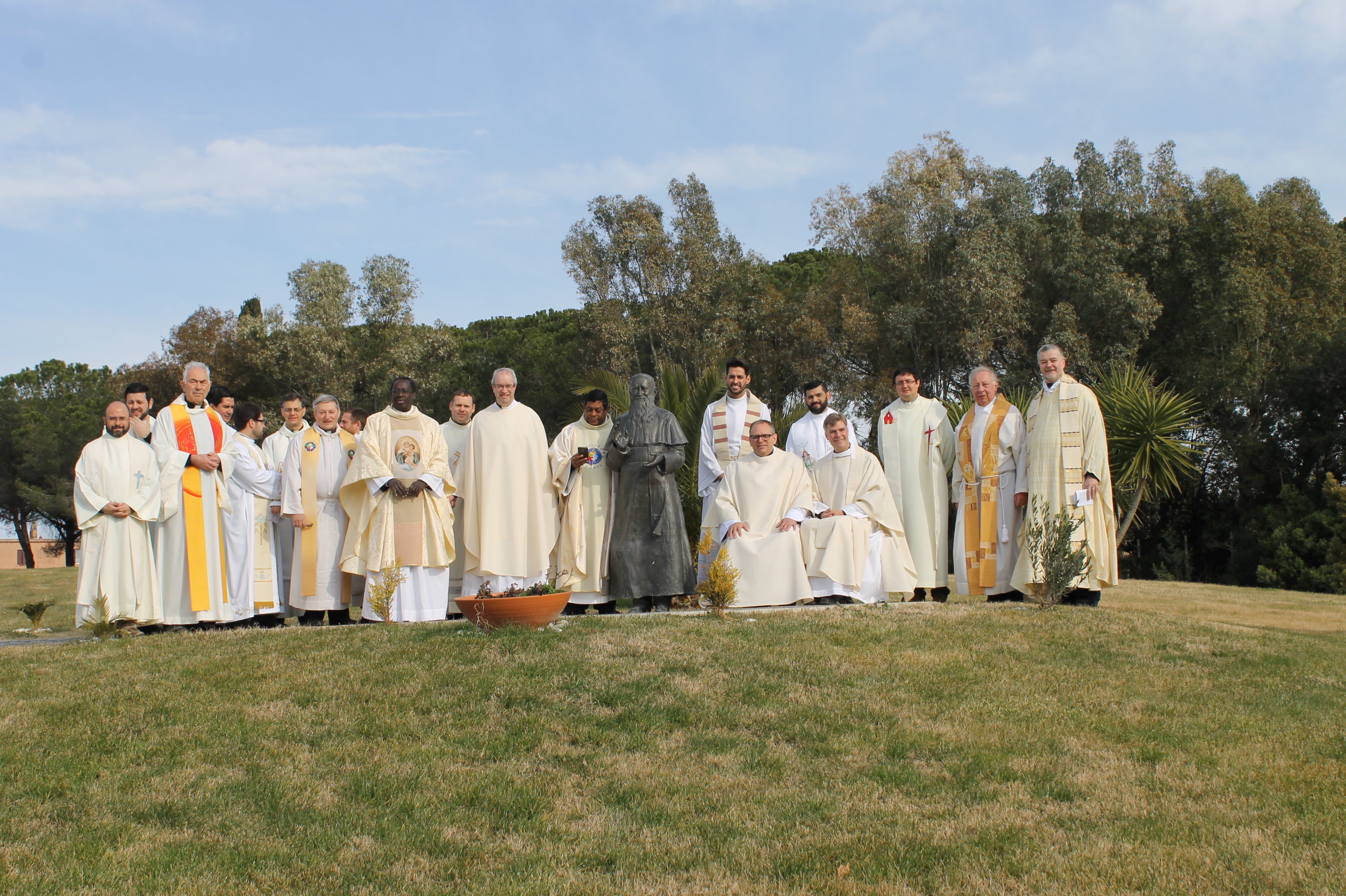 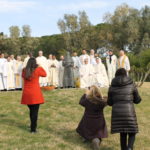 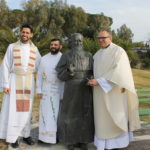 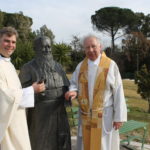 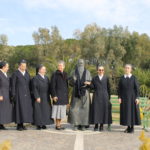 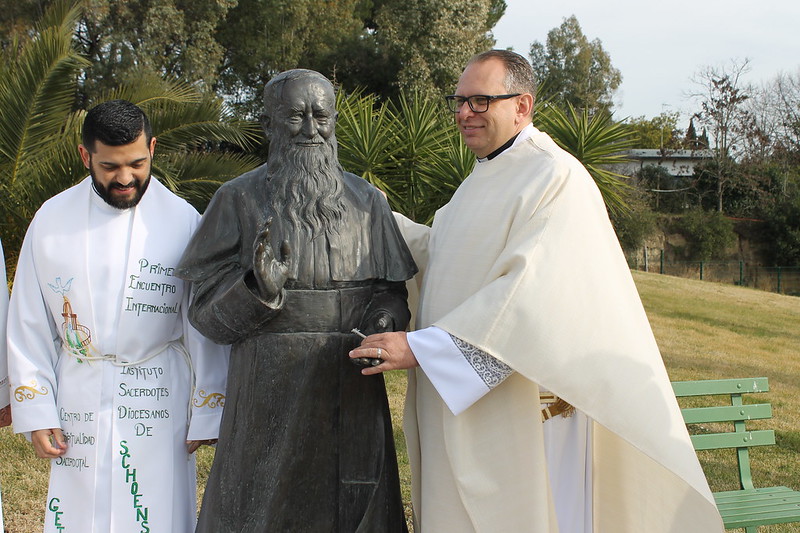 Suscribe to the newsletter