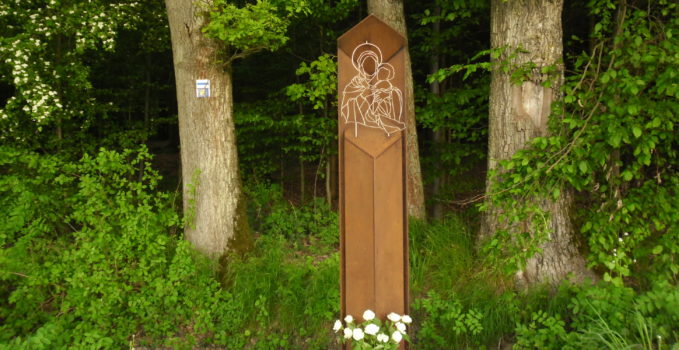 Mary’s invisible threads, made visible: In touch with Mary 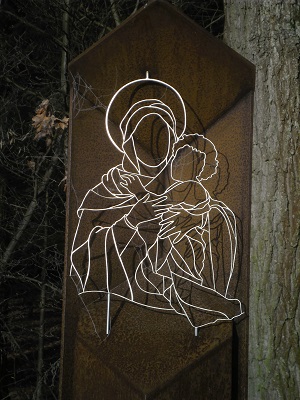 I want to learn from you,

and that his ways

that his will, which is often inconceivable,

ultimately is good for me.
I want to learn from you,

that there is no life without sacrifice

and this does not make me bitter

rather it makes me more mature,

and the purpose and blessing lies in this.

Extracted from the book in German: The Woman who Takes Me to Christ Vol. 1, p.160

Lead, guide, accompany and bless everyone you have entrusted to me.

Dear Blessed Mother, you called me early this morning, eagerly, I joyfully followed your call.

I joyfully allow you to call me.

The road took me through a dense fog toward a radiant sun. What a great joy that you welcome me into the light! Guide me the 365 days of 2017. I joyfully allow you to guide me.

I find myself in front of you radiant with happiness! I do not tire of contemplating you. You are “one” with your Son. I can perceive the birth. You invite me to take this place that is also for me. I joyfully allow you to touch the most profound of my being.

You look at me, I look at you – and suddenly I discover the threads of the cobwebs that become visible that are so random, so disorganized, not only on the edge, but also within relief of your image. You lead me with delicate, invisible threads, nonetheless you give me the freedom to choose the road. All the threads lead us from you to your Son. I joyfully allow you to lead me.

In my heart, I perceive the red threads that you gave me on the day of my Covenant of Love. The most important and guiding thread of my life, which unbreakably, connects me with your love. So much gratitude and so many petitions emerge from me. You listen to me attentively. In conclusion, I can only pray the Consecration Prayer. My Queen, My Mother…

At dawn on the Solemnity of Holy Mary Mother of God, 1 January 2017, Renate Siebenkäs felt attracted to this particular wayside shrine of the Blessed Mother’s. This wayside shrine is located on the edge of a forest. This prayer we just read emerged that night.

The wayside shrine on the edge of a forest 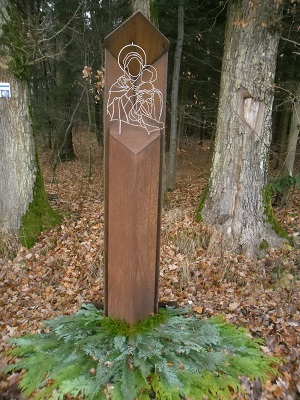 Most likely some are already familiar with this wayside shrine of the Blessed Mother’s with its delicate relief. It is Germany’s first wayside shrine contributed, within the framework of the “Pozzobon Hall in Belmonte” initiative, to be part of the digital mosaic in which hundreds of wayside shrines from all parts of the world will form the picture of the Original Pilgrim Mother.

Stefan Bergmann, a diocesan architect, baptized the wayside that he designed with the name: In touch with Mary.

Allowing Mr. Bergmann to tell us about his first work, “In touch with Mary” he describes the site where it is located: “The Schoenstatt image is made of fine metal, in such a manner, that the contours are only visible in direct view – waiting to be discovered – so to speak. The location in front of three trees seems very appropriate to me, the group of trees calls to mind the crucifixion scene.  Thus the image unites itself to the representation of Christ/Mary in the birth of Christ, where even the cross often appears, as a reference to Christ’s death. Conversely, Mary is also a part of the crucifixion scene. All the rest is a task for theological interpretation, or rather one for everyone who visits the image…”

For the promoters of the  “Pozzobon – Belmonte Initiative”,  Ana Echevarría, Mercedes Bonorino, Mercedes MacDonough, Cristina White and Monina Crivelli – the list reads like the who’s who that has made the Schoenstatt Rosary Campaign international – the Igensdorf-Stöckach wayside shrine is something very special. After all, Joao Pozzobon learned about wayside shrines and crosses in streets during his visit to southern Germany, and he immediately understood their evangelizing power. A Wayside Shrine is a site in the middle of a city, in the middle of streets, to enter into contact with Mary. To be in touch.

Immediately after his return from Germany and Rome, Joao Pozzobon encouraged and built wayside shrines. Now, these are returning to Europe, going to Belmonte. There are already more than 100, the majority from Argentina, where the initiative had a strong response, but also from Brazil, Bolivia, Chile, Uruguay and Paraguay. Several days ago the first photo arrived from the United States; it is a wayside shrine on Allen Street in Falfurrias, Texas. In between, the Stöckach Wayside Shrine picture arrived. In touch with Mary.  In reality, it is simply about this.