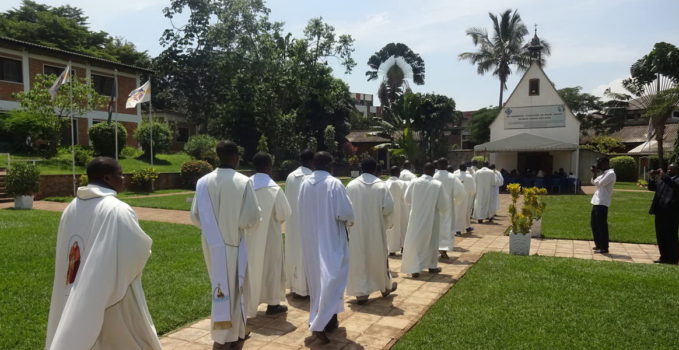 On Saturday, 21 January 2017, Mont Sion Gikungu Schoenstatt Shrine welcomed ten new candidates to the novitiate with the presentation of the Sion vestment. This event marked one step of a phase on the road toward priesthood in the Schoenstatt Fathers’ Community of Mont Sion Gikungu. Fr. Jean Bernard Mazuru, Superior of the Schoenstatt Fathers’ Community of Mont Sion Gikungu, emphasized that these young men wanted to follow the Lord and not a priest from this community, whoever he may be. He informed the Mass participants that he chose the Mass of the Virgin Mary, mother and educator, so that she would take care of these young novices. The young novices’ parents, some collaborators, and friends of Mont Sion Gikungu Shrine participated in the ceremony.

In his homily, the novice master, Fr. Herménégilde Coyitungiye, expressed joy in welcoming the ten novices for the first time in the Mont Sion Gikungu novitiate, two of the novices are residents from the capital, Bujumbura, one is from the Diocese of Ngozi, and the other seven are from the Democratic Republic of Congo. 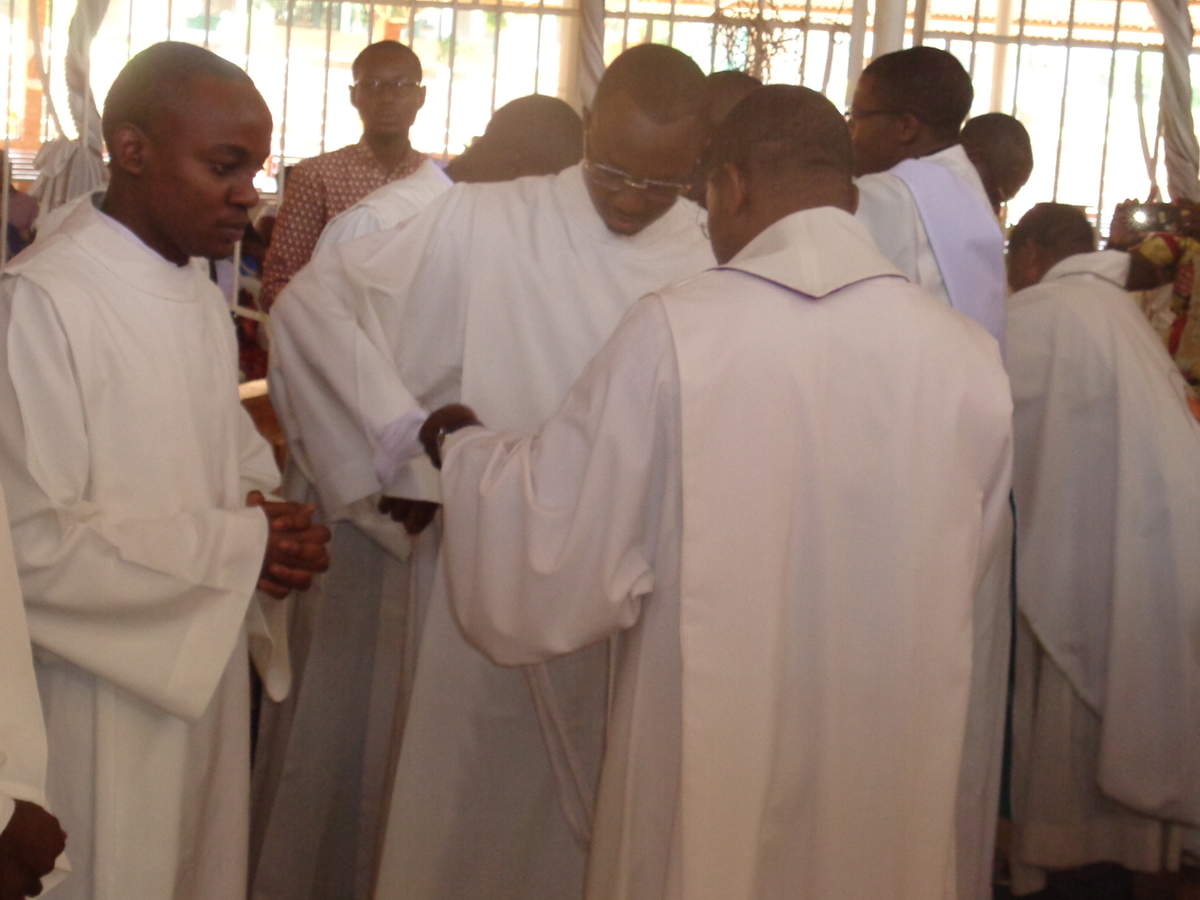 After the homily, the novice master proceeded to call each one of them by name for the presentation of the vestment. After a few, brief words with the Father Superior, he gave each one his vestment and cincture. Then he invited the con-celebrants to vest the young novices. Afterwards the Eucharistic celebration resumed with the novices reading the petitions in their native languages.

After the Mass, the young novices, accompanied by the Schoenstatt Fathers, their parents and friends, went in procession to the Mother Thrice Admirable’s Shrine, where they addressed a prayer to the Blessed Mother. Following this, guests were served refreshments in Vicente Pallotti Hall.

In his speech, the novice representative expressed his gratitude to the Lord for having chosen them with their weaknesses and for having led them up the road that took them to his mountain, “Mont Sion,” the Schoenstatt Fathers’ home, and to send them on his mission. Novice Iragi Nalubishi Gustave, Prefect of Novices, said that in this shrine he experienced the Blessed Mother as a mother who loves her children,. “She is the one who takes care of us, in her covenant of love; she wants to make us responsible men for God the Father’s kingdom, because we are her favorite sons,” he stated. He expressed gratitude to the Community of Schoenstatt Fathers, who, since December 2016, placed their trust in them, when they were accepted as novices, a trust that was realized on 17 January 2017, with a “pleasant event, the ceremony of the presentation of the Sion vestment.” He reassured their parents, telling them that he and his co-disciples are in good hands, that the Community of Schoenstatt Fathers takes care of them and educates them for their spiritual, moral and intellectual growth.

On his part, the parents’ representative desired that their sons follow God’s path, to follow the Ten Commandments, in order to receive God’s blessing. He invited the other parents to stand to give their sons a blessing. “The mission that you have been assigned is difficult, but with God’s grace, the Blessed Mother, the MTA’s support, you will obtain it,” he assured them. He concluded with Christ’s words: “No one has greater love than this, to lay down one’s life for one’s friends.” (Jn. 15:13). The representative of the guests, the ambassador Albert Mbonerane, also encouraged the young novices by asking for the moral support of the participants in this ceremony.

On his behalf and that of the Community of Schoenstatt Fathers of Mont Sion Gikungu, the Father Superior, Fr. Jean Bernard Mazuru, promised total support for the ten novices. This support also comes from the Provincial Father, who was unable to participate in the ceremony, and the support of the priests who are far away, but who share in the joy of welcoming them to their community. He took this opportunity to assure the young novices’ parents, telling them that they are in good hands. He asked for each of them to pray for their sons so the Lord will bless these sons of God.

Before the closing ceremony, Fr. Herménégilde Coyitungiye expressed his deepest gratitude to the parents and to all the assistants highlighting that each one has their role and their place in the training of these novices, and he added: “We are all John the Baptist” showing Christ, the Lamb of God, to these young novices. 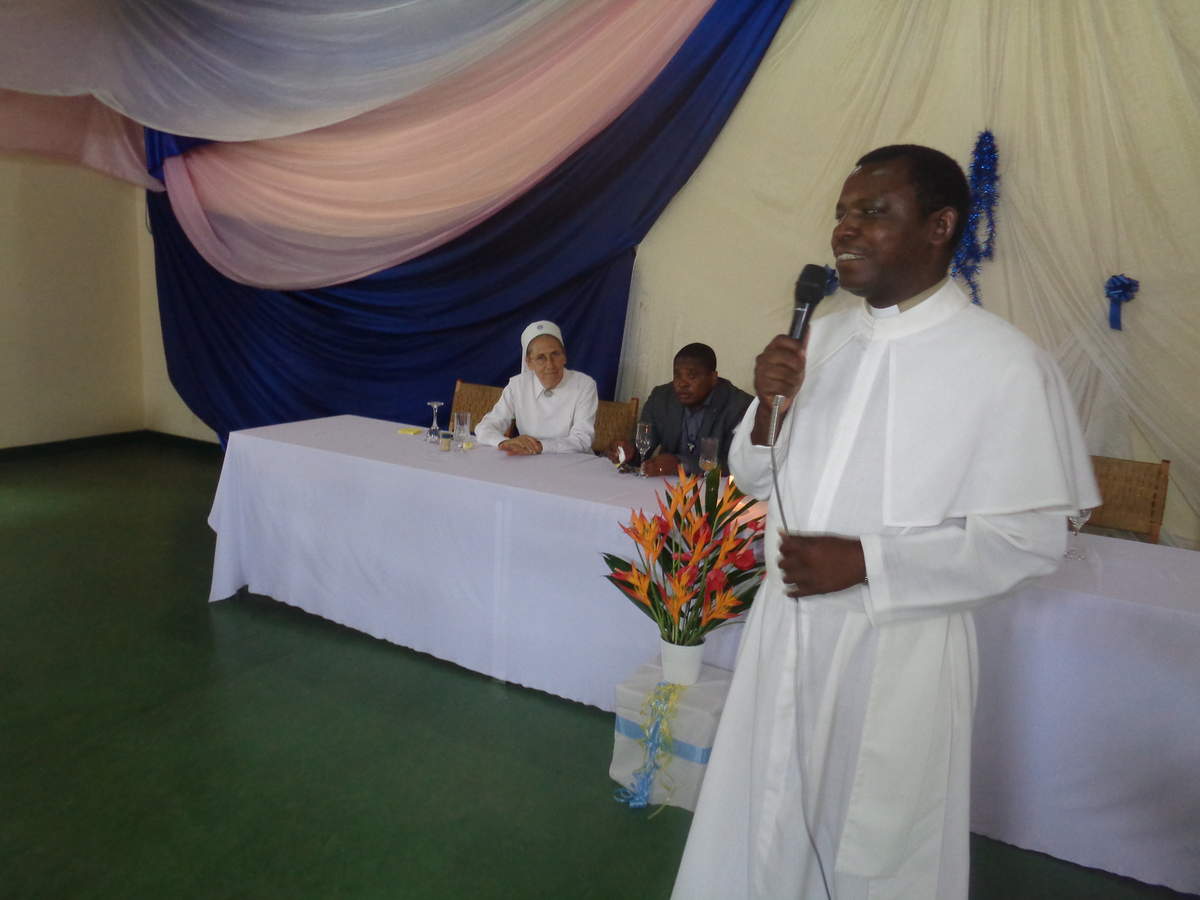 Two years without a cell phone!

Their teacher told the novices not to worry, he has the double role of father and mother just like Fr. Kentenich wanted every Schoenstatt Father to have. He also proposed that the parents visit the place where their sons would be, the surroundings where they would spend two years of enclosure. He also requested that they ask their sons to give them their cell phones, because they will not need them here. They will only be connected to God in order to open themselves to the world. He made it clear to the parents that he is the means of access between the novices and themselves.  Finally he promised the parents who want news about their sons will receive it through the mediation of the Novice Master in real time.

Fr. Herménégilde imparted the final blessing, and he invited to the novices to take their parents on a tour of the Noviate, so they would know the surroundings where they would be for the next two years.