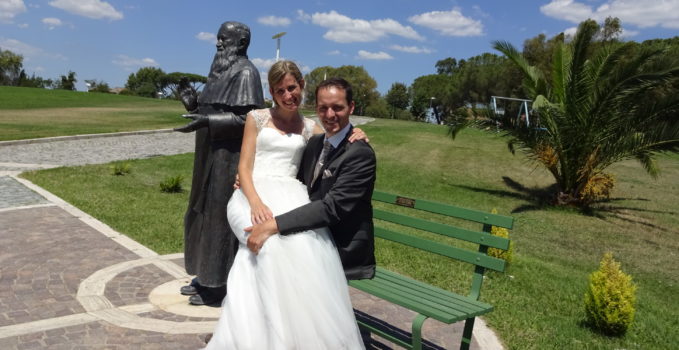 Visiting the Pope, honeymooning at home in Rome: “It was very beautiful at Belmonte!”

Pope Francis’ joy was palpable as he spoke about World Youth Day during the first general audience after summer vacation:

“Let us begin precisely with the young people, who were the primary reason for the Journey. Once again they have answered the call: they came from all over the world – some of them are even here! [indicating pilgrims in the Hall]. A celebration of colors, of different faces, of languages, of diverse histories. I don’t know how they do it: they speak different languages, but they manage to understand one another! Why? Because they have this willingness to go together, to build bridges, of fraternity…”

Katharina and Christoph Schleifer, a young German newlywed couple from Munich, who belong to the Schoenstatt Movement, were with the rest of the pilgrims in Paul VI Hall (the audience was held here because of the heat). The bride was once again wearing her wedding dress, and both of them were very excited about this wonderful prelude to their honeymoon, which would take them from Rome to Sardinia. “Everything worked out wonderfully and exceptionally, we had a wonderful day with the Pope,” they happily wrote weeks later. 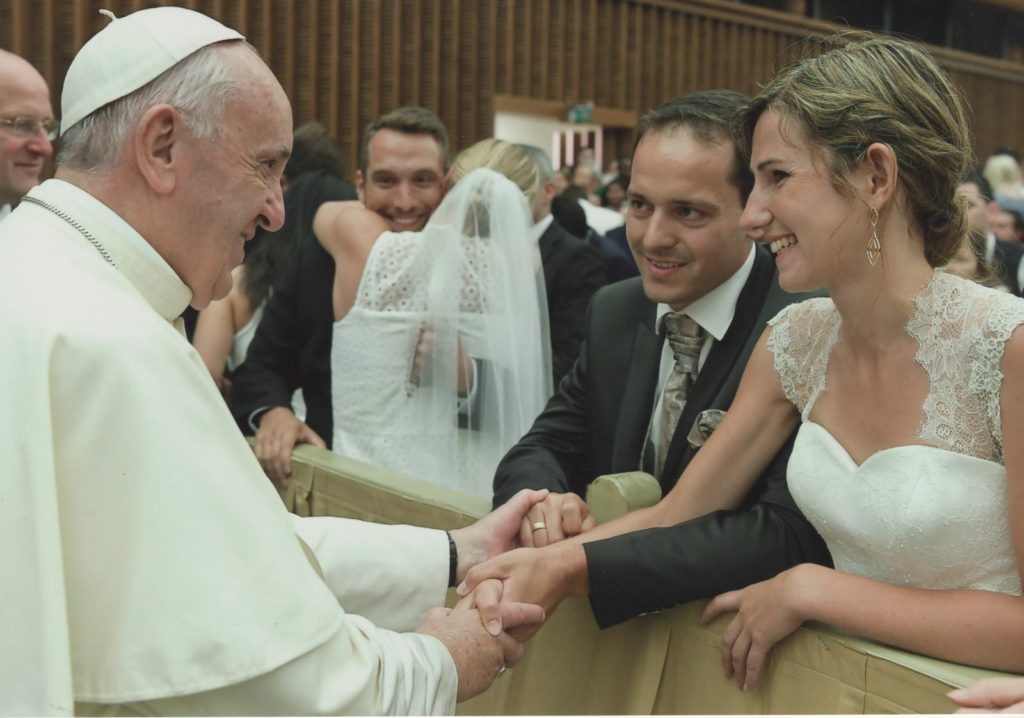 Take the wedding dress to Sardinia or? Wait! We have our home in Rome…

There was only one problem: they would go to meet the Pope with her wearing the wedding dress, but then, would they take it to Sardinia? They had no friends or acquaintances in Rome. Better yet however, they had a home! “Our home in Rome,” is what many call the Schoenstatt International Center at Belmonte. The couple visited the Belmonte website, and they explained their unusual petition – after the audience with the Pope, they planned to go on pilgrimage to Belmonte to change clothes and leave the wedding dress; then they would pick it up at the end of August on their return to Germany. 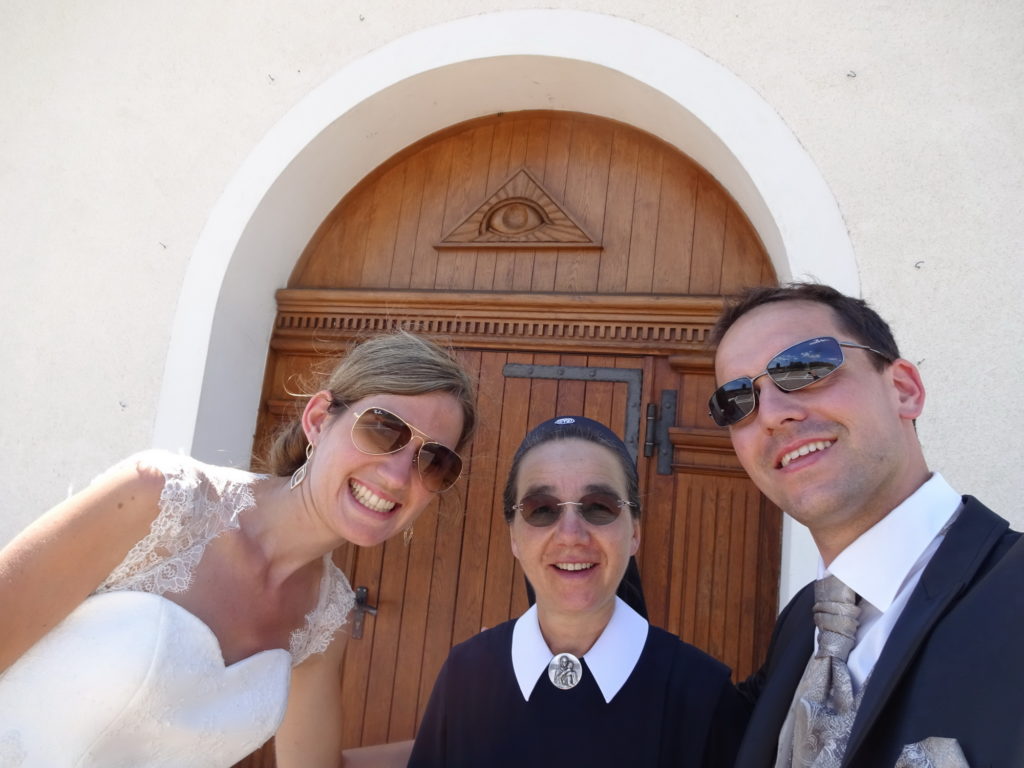 Rector Daniel Lozano was in Schoenstatt almost the entire month of August, he greeted the couple, but how would they collect their things upon their return? Sr. Yvone was at Belmonte, so this solved everything quickly and without complications.

The newlyweds spent a beautiful time at Belmonte. They sent a series of photos, and they wrote: “If you want, you can use the photos for publication, if we can multiply the joy with this! (They also left a donation at Belmonte.) Thank you for so much joy on such a very special day in Rome!” 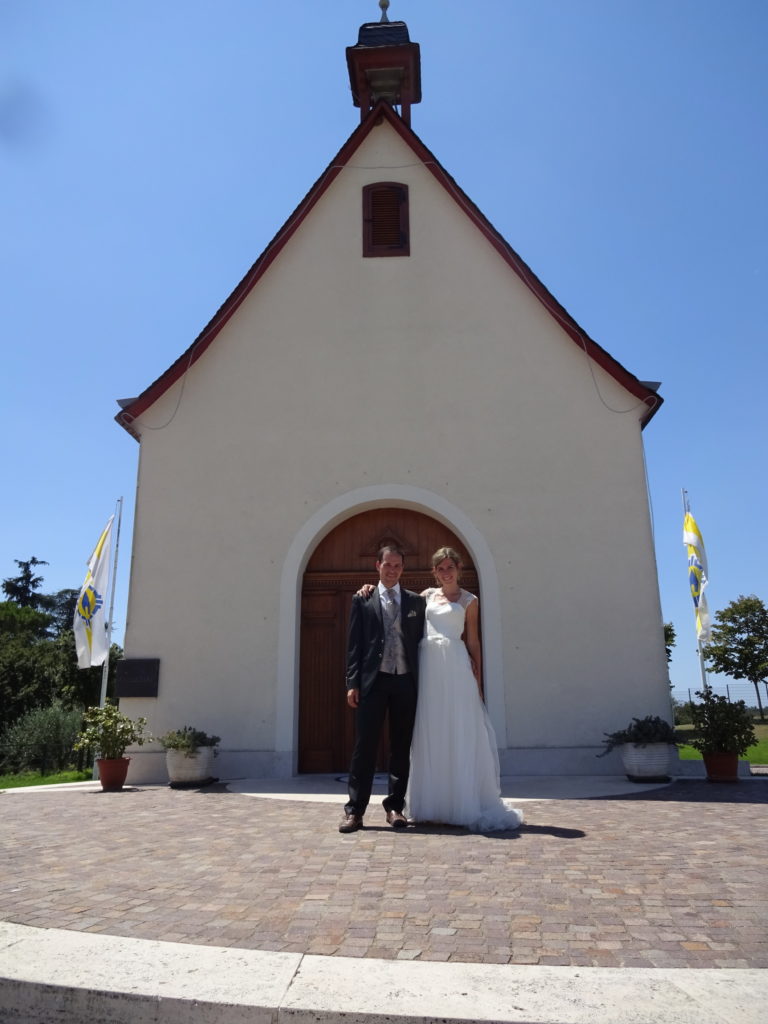