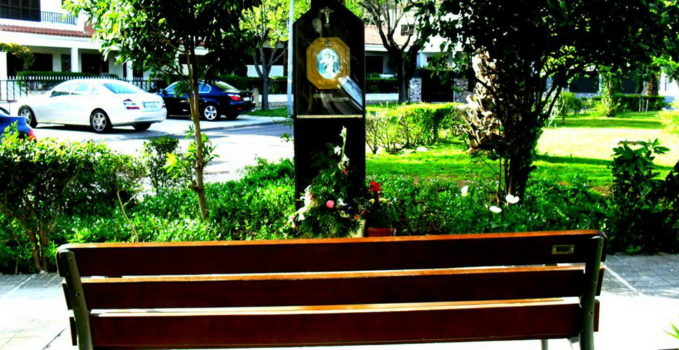 In Portugal and beyond, the Schoenstatt Shrine “goes out” embodying the image of the Church that Belmonte incarnates

In Portugal, a small country but not small of heart, a myriad of wayside shrines have sprung up in honour of our Mother and Thrice Admirable Queen, transporting the shrine with its three graces and message beyond its walls, on a pilgrimage that goes out to encounter hearts.  And in keeping with Portugal’s role in the history of mankind, when it spread the faith to the four corners of the earth at the time of the voyages of discovery, similarly, Portuguese hearts and souls took the shrine, in the form of a wayside shrine to Guinea-Bissau in Africa – a former Portuguese colony. 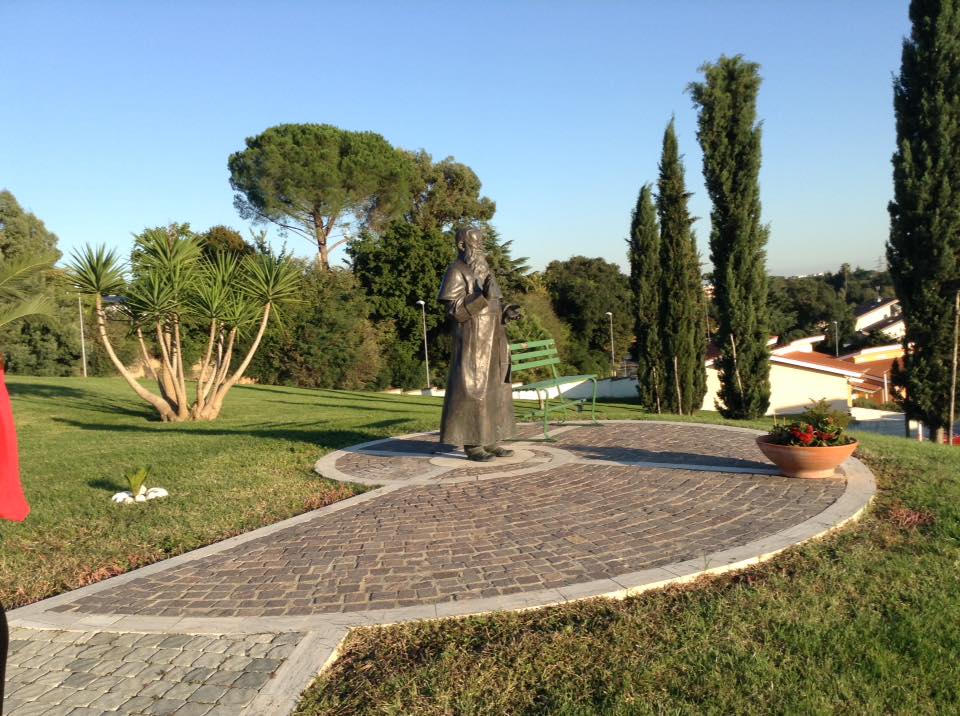 Pope Francis, right at the start of his pontificate, in November 2013 announced “his” image of the Church – which comes from Vatican II — “a Church that goes out”: To Jeremiah God says: “To all whom I send you, you shall go” (Jer 1:7) In our day Jesus’ command to “go and make disciples” echoes in the changing scenarios and ever new challenges to the Church’s mission of evangelization, and all of us are called to take part in this new missionary “going forth”. Each Christian and every community must discern the path that the Lord points out, but all of us are asked to obey his call to go forth from our own comfort zone in order to reach all the “peripheries” in need of the light of the Gospel.” — (Evangeli Gaudum, No.20)

The Pilgrim Mother Campaign was started by João Pozzobon on 10 September 1950, when he received the image of our Mother and Queen of Schoenstatt, embodying this missionary reach of a Church that goes out, of a “Schoenstatt that goes out.” Guided by the Holy Spirit, “in that moment I understood that the goodness and mercy of God and the Mother and Queen had given me a great mission of evangelisation: the Rosary Campaign (João Pozzobon).”  This man, in his originality and simplicity made himself available to be an instrument, to serve the “Schoenstatt that goes out,” taking him to the Church, thus helping to build this pilgrim character that the men and women of our time need so badly.

Belmonte, a lighthouse for Schoenstatt at the service of the Universal Church

“Belmonte, as Father Kentenich’s pulpit in Rome, aspires to be a place of encounter with his person and his charism, with his being, his ideas, his message and his understanding of the Church” (Fr. Marcelo Cervi, future rector of the Belmonte shrine).

Belmonte, in addition to being the gift that the International Schoenstatt Family — those have been to Belmonte, who are there now, and those who will come, as the Founder always used to say — gave Fr. Kentenich on his 80th birthday, is also his insistent plea to the entire Schoenstatt Family to take up the commitment to build the shrine and international centre in this space.  Belmonte, is therefore, the commitment taken up by the sons and daughters of Fr. Kentenich to make him the “visible face of Schoenstatt in the Church,” thus building the House of the Father and his children (physically and spiritually) in Rome.

Belmonte is the “shrine that belongs to all of us,” an international shrine where we can all be represented, personally, at Institute, Union, League level…Belmonte is the “duty of all of us” to contribute to making this “lighthouse” of our Founder possible and making it a “Schoenstatt that goes out” to enrich the Church.

This is the essential connection to the Pilgrim Mother Campaign.  At that time, the ground where Belmonte stands today, had only a wayside shrine dedicated to the Mother Thrice Admirable, which João Pozzobon and the Original Pilgrim Mother visited in 1979.  He wanted to present the fruitfulness of the Campaign to the Church and, in Rome, stood on the same spot that our Father and Founder had stepped on 14 years earlier, he who considered himself to be the “little student.” Faithful to the origin, he validated the founder’s wish in relation to Belmonte and his International Schoenstatt Family with the presence of the Pilgrim Mother and all aspects of this apostolate.

This visit to Europe inspired him to build wayside shrines in honour of the Blessed Mother, so that she could be present near her children and encourage them to pray and live according to the faith.

This is why there is a room in Father Kentenich House with his name, where an image of the Pilgrim Mother of Schoenstatt will be installed, composed of photographs of the wayside shrines across the world that were sent to Belmonte.

In Portugal, the Mother and Queen multiplies her physical presence throughout the Blessed Mother’s Land In Portugal, there are two kinds of wayside shrines: those that were put up on the properties belonging to the different Institutes and Unions (Ladies of Schoenstatt, Sisters of Mary, Union groups) to mark the future presence of the shrine, bringing to life the desire to build the shrine, and those that are the “fruits” of the Pilgrim Mother’s visit to families, the Family and Youth Missions and Missão Pais [national missions].

Under the first category, there is the example of the wayside shrine of Gafanha de Nazaré, installed in 1977, the Lisbon wayside shrine installed on the 31st of May 1973 and blessed by Fr. Jaime Ochagavia from Chile who had recently arrived in Lisbon.  In this ceremony, the Family in Lisbon prayed for the transformation of this place into a holy place: “This is the place we found with your help for the construction of our first shrine in Portugal…we ask you to make it a holy place for all future generations….” There is also the wayside shrine of the Portuguese Family of the Father in Fatima, installed on 13 May 1978 and where the Blessed Mother was crowned as the Queen of Unity in the Portuguese Family of the Father on 20 June 2009.  This wayside shrine symbolises more than Unity in the Portuguese Family and the Unity of the Portuguese Family around Fr. Kentenich, but is also an intimate parallel between Fatima and Portugal.  Fr. António Maria Borges had the idea for the wayside shrine when he was working in the Gafanha de Nazaré parish, helping Fr. Miguel Lancastre who was the prior.  The triangular Father Symbol gives unity to the other elements: the image of Mother Thrice Admirable, the Schoenstatt Shrine and the Fatima Shrine. The inscription “in Fatima, Family of the Father” is also engraved on it.

Under the second category are the wayside shrines built in gratitude to the Blessed Mother as an expression of the love for the Shrine and its message.  There are so many wayside shrines that some areas are real “open air” shrines.

This is how in 1990 a youth wayside shrine was installed in the Nova Oeiras Parish on 2 December, where later on 12 September 2002, the Blessed Mother was crowned Queen Thrice Admirable of St. Anthony’s Parish in Nova Oeiras, in the presence of the then prior, Fr. Ferreira de Melo and three Schoenstatt Fathers — Fr. Miguel Lencastre, Fr. Antóno Lobo and Fr. António Maria Borges. 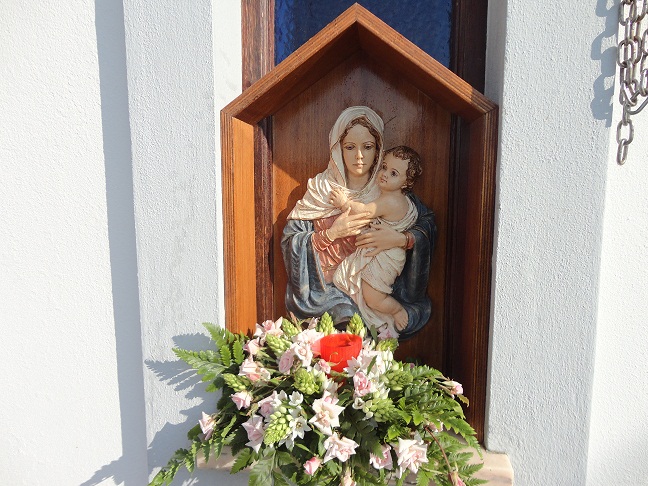 In June 2012, Our Lady of Schoenstatt was enthroned in 14 wayside shrines in the Moita Parish.  These wayside shrines are fruit of the Pilgrim Mother Campaign which was started there in 2007 by the youth of Aveiro during their traditional Easter Missions that have continued over the years. The number of wayside shrines in such a small place is like being inside a huge Schoenstatt Shrine which has God’s sky as its roof.

On 1 December 2013, the Mater Wayside Shrine in Grada, Vila Nova de Monsarros, was blessed in a ceremony presided by the Aveiro Bishop, António Francisco.  The wayside shrine is located at the entrance to a road, making it visible and easy to access.

On 26 October 2014 the Monsarros wayside shrine, built in the shape of a shrine which fits five people, was blessed. According to parish priest, Fr. Vitor Espadilha, the “wayside shrine in Monsarros/Portugal – in the Vila Nova de Monsarros parish, in the diocese of Aveiro – came about during a pilgrimage to that place that started 11 years earlier. Four women discovered the Schoenstatt Shrine in Gafanha de Nazaré, 37km away, and took Schoenstatt into their lives.  It quickly spread. Over the years two chapels attached to the parish churches have been dedicated to the MTA; dozens of Pilgrim Mother images circulate in the four parishes of the diocese; a wayside shrine in Grada/Portugal was blessed during the opening of the Jubilee celebrations of the Covenant of Love in October 2013 by the local bishop.  Now, to crown the jubilee they will bless the wayside shrine that looks like a shrine.”  Many people attended this blessing, among them members of the Institute of the Schoenstatt Sisters of Mary, members of the Schoenstatt Family in Aveiro, many residents of the area and the municipal president, who is also a Schoenstatt member.

In 2011, two members of the Girls Youth in Lisbon went on mission with a woman from the Institute of Our Lady of Schoenstatt (the director for the Girls’ Youth) to the Bafatá Parish in Guinea-Bissau. Since then, the Boys and Girls Youth of the Lisbon Shrine go annually to Guinea-Bissau in July, as envoys of the MTA.  Although the Schoenstatt Youth (Girls Youth in Lisbon) are responsible for organizing this mission, it is open to other youth who want to participate.  The population was amazed with this experience of “door-to-door” mission, because they said they had never been visited by missionaries, even though they had asked the bishop for a visit.  Even the Muslims joined in with their own prayers.  But the July 2014 mission had an important climax.  On the 18th the wayside shrine dedicated to the MTA was blessed in a ceremony presided by the Bishop Pedro Zilli.  It was a joyful day in the Bafatá Catholic Mission.  But the MTA has many more plans and awoke the desire in many hearts to become Pilgrim Mother missionaries.  Subsequently seven groups were formed to take the MTA who “goes out” to the families.

These are the wayside shrines we know about in Portugal, the photos of which have already been sent to Belmonte, creating a bond of love, responsibility, and commitment between the mission of our Lady Thrice Admirable of Schoenstatt in Portugal, and the mission of Belmonte for the whole Church, which has as its common denominator and indestructible tie, the work of João Pozzobon, the Pilgrim Mother Campaign. 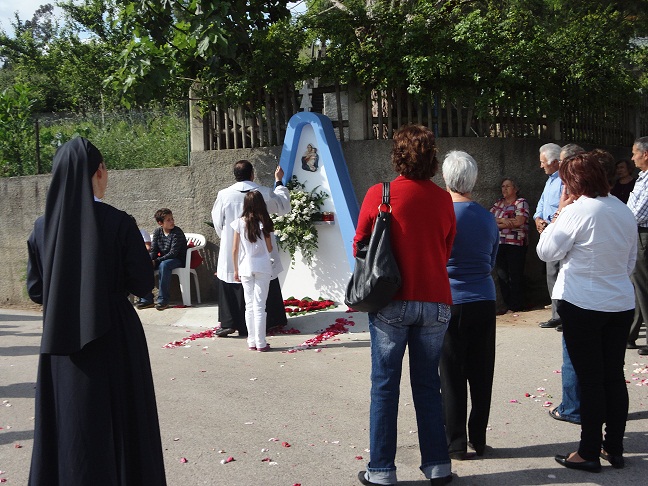