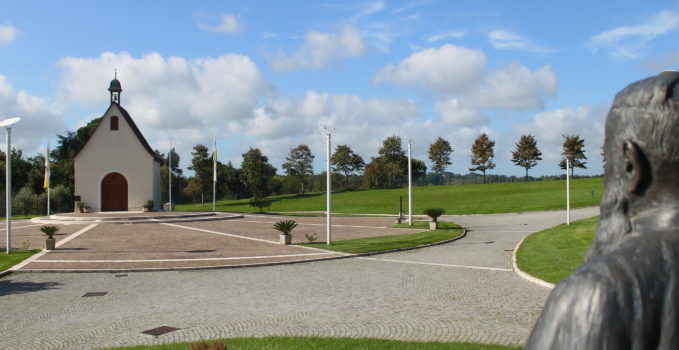 Belmonte: The Center of Our Enthusiasm for Schoenstatt and Its Mission

You posed the topic of Belmonte during one of your meetings of the Schoenstatt Family Institute.  In what context?

Albert Busch:  Yes, during the annual meeting of the German-speaking region in August of 2016, the topic was the missionary task we have to support in the Church and in the world  – we as the responsible and enlivening nucleus within the Schoenstatt Family Work.  Our meeting took on the character of a re-orientation in agreement with the memorandum, which the General Presidium of the International Schoenstatt Movement formulated after the great 2014 Jubilee.  In this context, the leaders of our region entrusted us to center attention on the importance of Belmonte with our new missionary re-orientation.

What is Belmonte’s role?  For you personally and for your community?

Aloisia Busch:  If you talk to us personally about Belmonte, then you touch the center of our enthusiasm for Schoenstatt and its mission.  In the past, we often replaced the family caring for Belmonte and in this way, living there, we were able to experience how the mission of the International Center in Rome developed.  Since the Matri Ecclesiae Shrine blessing in 2004, we have experienced a growing Italian Schoenstatt Family that is taking on more responsibilities for the shrine and is maintaining good contact with the local parish.  Furthermore, many pilgrims from all over the world come to this “beautiful mountain.”  For us, Belmonte is the International Schoenstatt Center in the heart of the Church with a familiar touch:  what we have liked very much about this place is the people living there maintain open doors to all who want to come there like the Institute’s priests, the Sisters, the Italian Schoenstatt Family, the Fathers or the volunteers from the different Schoenstatt communities:  they try to fulfill their tasks in a family atmosphere.  There is an inviting atmosphere in Belmonte that is open and welcoming.  Belmonte is a place where we like to be, where we feel good, and where we like to offer our services.

Albert Busch:  Belmonte is not only an interaction in what is small and everyday, but also in what is great.  It is a place of solidarity with the rest of the Schoenstatt Family.  We, as members of the Institute of Families, feel attached to the gift which the General Presidium made to our Father and Founder for his 80th birthday in Rome, in 1965.  Together with all the other Schoenstatt communities, we are the generation that has fulfilled this gift.  In Belmonte, we can always re-celebrate the birthday of our Father, that is, to have his mission present for the Church and world and for us to decide to fulfill this mission according to our present time.

Schoenstatt has 200 shrines throughout the world.  Why does it need the Shrine in Rome?

Albert Busch:  Each of the world’s Schoenstatt shrines has its particular history, and consequently, its particular mission.  We believe that the Matri Ecclesiae Shrine, along with the Original Shrine, and the other international shrines, plays a prominent role in the context of all the shrines.  It concentrates and reflects the image of the Church of our Father, just as he defined it in his talk on December 8, 1965.  All Schoenstatt shrines, with their original mission, are guarantors of our Father’s mission.  The Original Shrine is and will remain as the foundation and source of our missionary task for the Church and world.  And Belmonte seems to us like a crown radiating this mission in the Church and in the world, especially near the Holy Father in Rome. 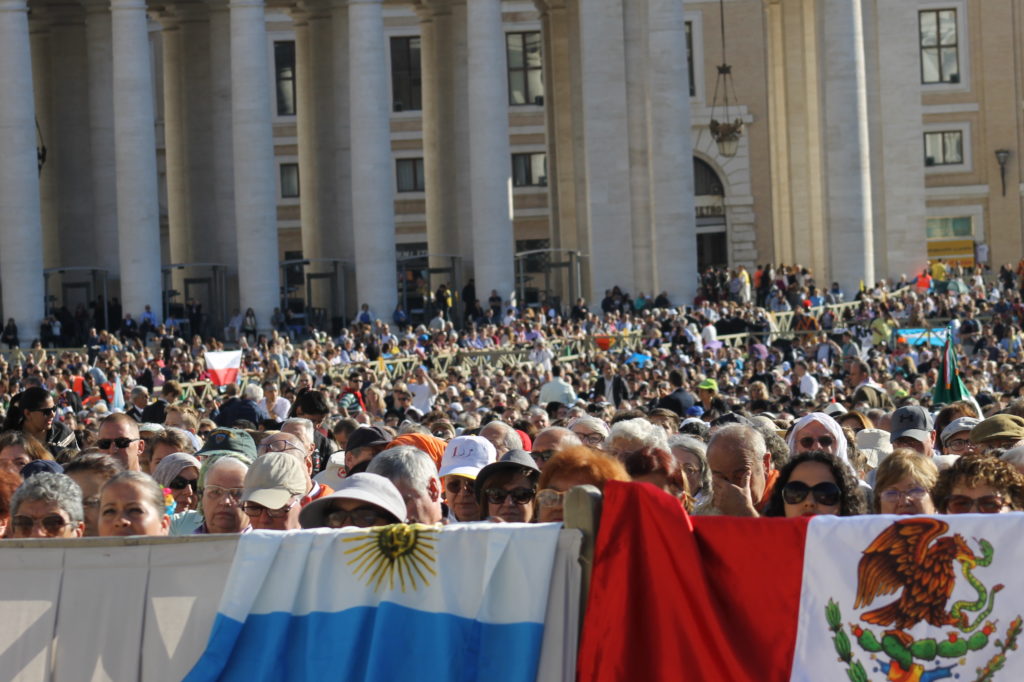 Father Kentenich often speaks of a renewed Church, a new Church.  In this sense, does the Schoenstatt Center in Rome have a special mission?  And if this is so, where do you see the contribution of the families, and concretely of your institute?

Aloisia Busch:  We are impressed… how this new Church of which our Father speaks is now found alive if we take into consideration the pilgrimage of the “people of the world” to the Matri Ecclesiae Shrine during the 2014 Jubilee Year.  Everything was colorful and varied, dancing or singing, meditating and praying, thousands arrived at the Shrine of the Mother of the Church in Belmonte.  They brought their offerings and placed them at the disposition of the Blessed Mother in the shrine.  Also the results of the covenant culture tents at the Jubilee in Schoenstatt found their place in the documents’ coffer located under a glass plaque in the floor of the Matri Ecclesiae Shrine:  it is an expression of the diversity of tasks and the life of our International Schoenstatt Movement, a realization of the lived Covenant of Love.  And it was beautiful to experience the response to the life of the moment:  how the Eucharist was celebrated over and over by groups in different languages, although many times it was not planned.  The new Church, the pilgrim Church wants to serve life in its dignity and beauty as well as in its limitations, weaknesses and errors, and wants to love her maternally in a broader and more profound union with God and the Blessed Mother.  Concrete experiences of pilgrims and communities in and with Belmonte Shrine serve to arrive at this way, and also great international congresses that center the present topics in an integral and prompt manner according to the house’s possibilities.  These will be able to be planned and take place in the House Domus Pater Kentenich.

Albert Busch:  The image of Father Kentenich’s Church: “Mary, Mother of the Church.  The Church: mother” should develop not only in the world’s Schoenstatt Centers or in parishes and in ecclesial communities, but also should come forth in the domestic churches – the families.  The family is and continues being the privileged school of life and faith for the Church’s future.  The families who have sealed the Covenant of Love with the Mother Thrice Admirable, Queen and Victress of Schoenstatt, conscientiously place themselves at the this task’s disposal through their Home Shrines.  In covenant with God, we, the families, engender in and through the sacrament of matrimony natural and supernatural life.  We are a faithful reflection of the living God.  In the Home Shrine as a pilgrim church, we accompany new life on a daily level, which is given to us in our children, and in, with, and through our family, we protect, support and stimulate this life that God has given to us in such a way that it can reach its full development.  Our missionary task is directed, first of all, to our own marriage and family.  And we are happy and grateful knowing that in the Original Shrine, in the Shrine of the Families on Mount Nazareth and in Belmonte Rome, in the great community of our Church, we feel supported, carried, held and sent on our innate mission.  For us, Belmonte means that our mission for marriage and family is not only something personal as spouses and within Schoenstatt, but something that wants to be fruitful for the entire Church and world.

What is your vision of Belmonte?  Concretely: What do you expect to become a reality beginning January 1, 2018?

What do we want for Belmonte in 2018?  That families from throughout the entire world would make an international pilgrimage to Rome, and in Matri Ecclesiae Shrine they would seal the Covenant of Love with Pope Francis.  And if the Holy Father himself would be present in the Shrine:  undoubtedly, that would be a crowning moment! 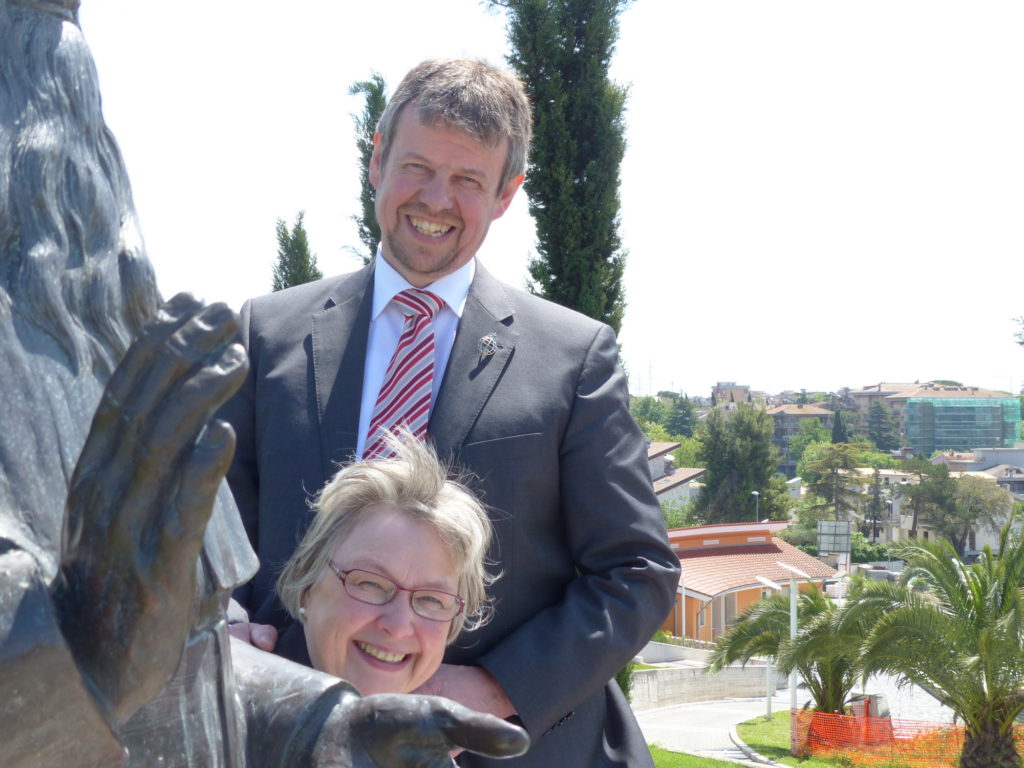