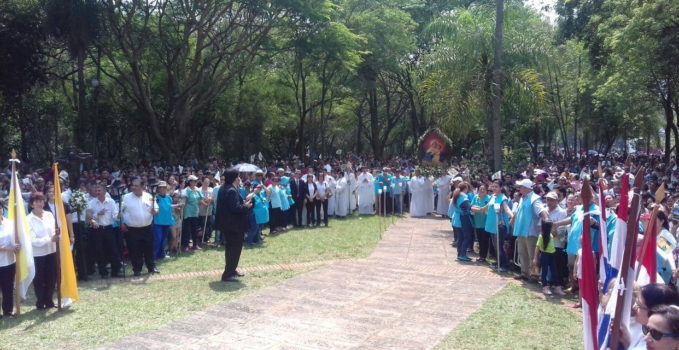 Tuesday, the 18th was a day different from others. I was not leaving hurriedly to get to the office, but rather, I was eager to arrive at Tupãrenda on time to greet the Blessed Mother, who makes and breaks my life.

At dawn on this day, it already felt hot; undoubtedly we would have a very hot gathering as usual in Paraguay. However this morning there was a breeze, unlike others, because although the sun was hot, the breeze was cool, because a mother always takes care of her children.

I arrived thirty minutes before the day’s first Mass began. The paths that lead from the parking lot to the Shrine were still quiet and upon arriving on the grounds, one could see the grass like an immense green carpet illuminated by the sun that shone in all its splendor over Tupãrenda.

I went to the Shrine to greet the Queen of the house, and I got in the line, which was still short, to enter. I knew that this was a privilege, because in a few hours, this line would be enormous.  Upon entering, I encountered some pilgrims who were kneeling to greet the Blessed Mother. Surely, just like me, they were giving her the joys, desires and everything that concerns their heart. 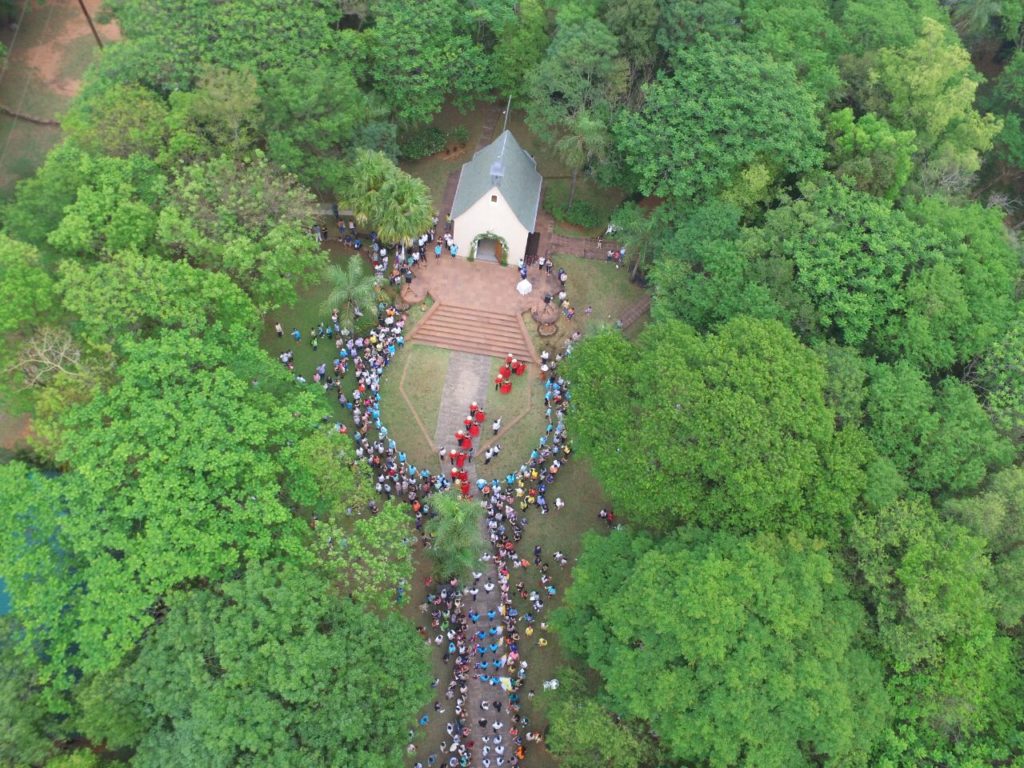 Mary is the bridge that leads us to the Merciful Father

Upon leaving the Shrine, I encountered the procession of celebrants on the way to the altar to celebrate Holy Mass. I walked behind them, and I positioned myself in the center, on the grass that made a carpet for the Blessed Mother beneath the burning sun.

Bishop Joaquín Robledo, from the Diocese of San Lorenzo, celebrated the Mass. In his homily, he spoke about the Father’s mercy and how Mary leads us to him.

“Every time we arrive at Tupãrenda, we experience that double merciful embrace where we receive Mary’s first grace, an embrace that shelters, that gives us a home. She transforms us; we do not leave the same as when we arrived. We leave Tupãrenda with a transformed heart.”

He said the same happens to us when we receive the Pilgrim Mother’s visit in our home; she makes us feel sheltered, transformed.

Bishop Robledo concluded his homily saying that Mary has truly brought us to the Father– to that Father who loves us extraordinarily and who constantly offers us his mercy and forgiveness. 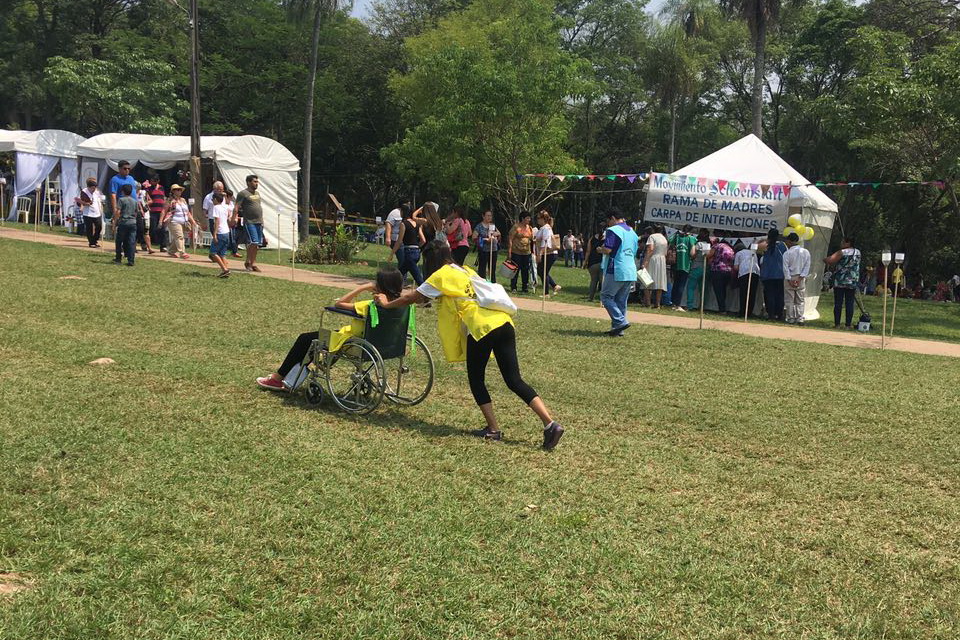 A family at the service of pilgrims

As every year, one could observe the entire Schoenstatt Family from Paraguay working at the service of pilgrims who come to Tupãrenda to greet the Blessed Mother.

A feeling of pride and the need to make a small contribution overcomes all Schoenstatters on this day so that everyone feels welcome in our Shrine.

One could observe servants of all ages, everyone carrying out their work with a big smile. They directed traffic, served water to pilgrims, transported the ill. Some were in charge of the liturgy, others helped those in wheel chairs; there were people who registered the Pilgrim Mother. There were different tents on the path leading to the Shrine providing information.  There was, time for prayer and so many other tasks and details were carried out on this day. The Blessed Mother’s servants were everywhere. 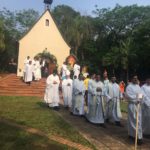 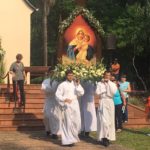 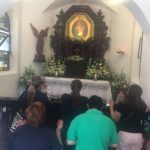 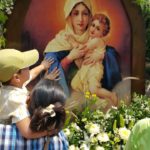 That morning when the Mass ended, I was happy to be in Tupãrenda and of beginning the day greeting the Blessed Mother, but my happiness was not complete because I could not go to confession. So I prayed to the Blessed Mother so that I could receive the sacrament of reconciliation. I went where the confessions were being held; there were several priests listening to confessions under the trees, in the open. There were servants who organized the order; they offered an examination of conscience that you could carry out while you were in line. My turn only took thirty minutes, and when the priest gave me absolution, he told me something that touched my heart:  God is happy with you because you reconciled with him, and he gives you the opportunity to start anew. These words made my eyes gleam and it filled my soul. The Blessed Mother’s gift led me to the arms of the merciful Father just as the bishop said in his homily.

Before returning home, it was already afternoon, and I had to return to work, I went to the bookstore to buy a picture of the Blessed Mother. Soon I will move to an apartment, and I thought there was no better time or place to obtain the (picture) of the Blessed Mother who will occupy the center of my Home Shrine.  I found what I was looking for, and I was happy to conquer the picture. It was close to noon and I did not have much time; that green carpet was now obscured, because it was covered with pilgrims who came from everywhere to greet the Blessed Mother. I decided that it was better to bless the picture some other time at the Santuario Joven (Youth Shrine) where I always go. However, the Blessed Mother had a last gift this day, and as I went toward the parking lot, I encountered a long table and behind it, there was a priest with a receptacle of water and a little branch with green leaves, which he used to bless holy objects pilgrims brought. I also approached and that is how the Blessed Mother for my Home Shrine was blessed on 18 October in Tupãrenda. 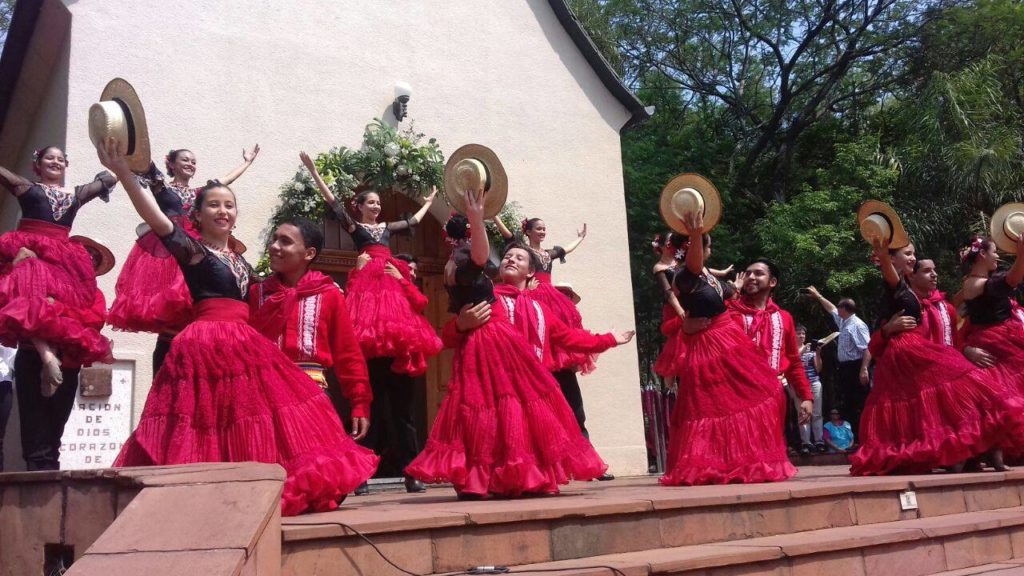