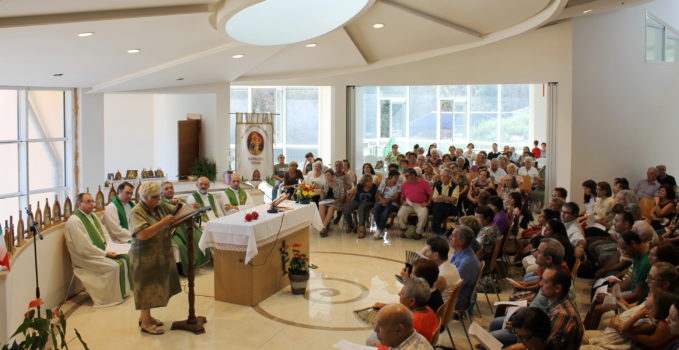 With Mary, a new, dynamic Church: annual meeting of the Italian Schoenstatt Family in Belmonte

“We should really have postponed and all of us should have been in St. Peter’s Square. The organizers realized too late that this year the first Sunday in September, traditionally the date for the annual meeting for the Italian Schoenstatt Family, would coincide with the canonization of Mother Teresa of Calcutta. An element of sadness among many of the participants and fewer participants than usual, particularly among the customary invited international clergy in Rome, were the visible signs of the date clash on 4 September. “In the future, I’ll remember that here in Belmonte, we shall accompany and celebrate these events more vividly,” said the future rector, Fr. Marcelo Adriano Cervi, “feel, celebrate, suffer with the Church: That is also part of the mission of Belmonte!” 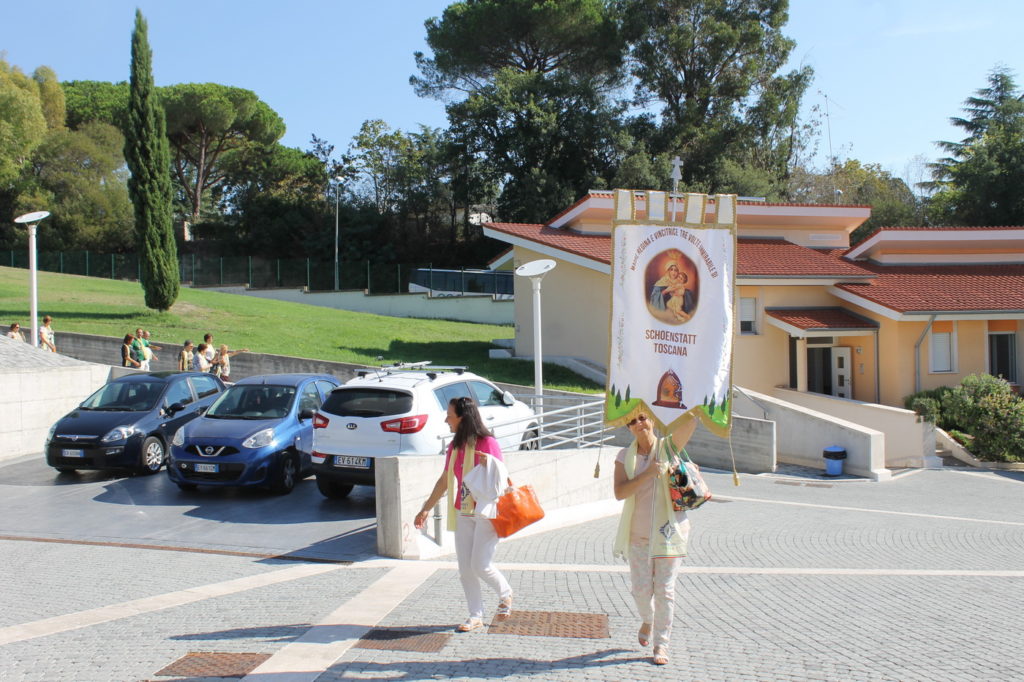 Tuscany arrived with their flag

The meeting, which kicks off the Schoenstatt activities after the summer break, included several special moments this year: the presence of the Pilgrim Mother Auxiliary for Europe, which is visiting Italy again; the future rector of Belmonte, Fr. Marcelo Adriano Cervi, gave a talk; for the first time there were people form northern Italy from Trento; Terezinha and Nivaldo Abram, the first “Custodian Family” to have stayed in Belmonte, were present, and Davide Russo streamed the whole event live via Facebook Livestream.

And then there were the participants who came from many different parts of Italy. The delegation from Tuscany stuck out because they brought a beautiful flag with the image of the Blessed Mother. Many came from Rome and its surrounds, as well as a big group from Puglia. More than a dozen Pilgrim Mothers were placed along the balustrade in the entrance hall of the Domus Pater Kentenich and formed a beautiful backdrop for the talks and testimonials over the weekend.

International and many stories

Rome is the centre of the universal Church and meetings of the Italian Schoenstatt Family are always characterised by their internationality. Gisela Ciola and her husband Paolo participated for the first time. She is Argentinian and emigrated many years ago, bringing with her Schoenstatt and the Pilgrim Mother from her home country. Now, Schoenstatt is starting up in Trento, and Gisela found people during this meeting who will help her prepare others to make their Covenant of Love. Fr. Valentino from Uruguay, who is currently studying in Rome, made is Covenant of Love in the Nueva Helvecia shrine. He got to know Schoenstatt when he started working in a parish that had a very vibrant Schoenstatt youth. “They invited me to celebrate covenant Mass with  them when they made their Covenant of Love, they give me books on Schoenstatt…and they convinced me and won me for Schoenstatt!” There was also a lady from Ecuador who has lived in Venezuela for many years and asked for prayers for her country that is suffering so much. Among them were also Fr. Rolando Montes, a Cuban priest from the Federation of Diocesan Schoenstatt Priests, who attended in the afternoon and was immediately asked to hear confession from the moment he walked in the door! “It’s the first time I hear confession in Italian,” he said, a little uncertainly. It had only been two weeks since he arrived in Rome. “Don’t worry,” the person who wanted to confess told him. “I only speak Italian and I really want to go to confession.” Fr. Rolando had barely come out of the improvised confessional when the word spread about the opportunity for confession that day! 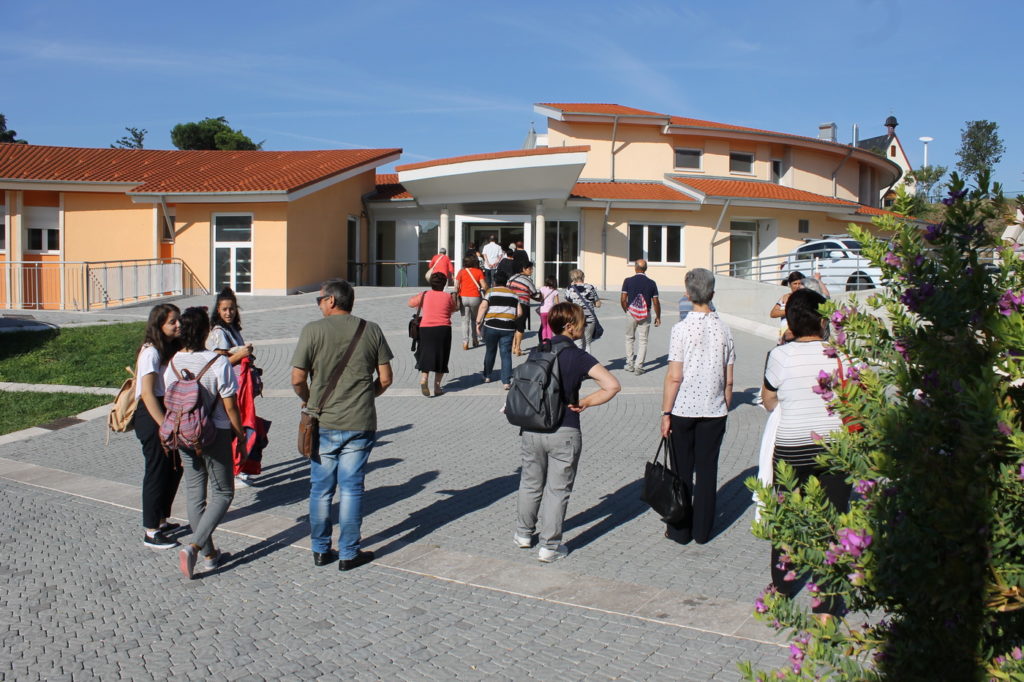 Fr. Marcelo Adriano Cervi, the future rector of Belmonte, spoke about the Holy Father’s invitation to be a Church that goes out, goes out to people, and that Belmonte also sees this as its mission. And it has to do with Fr. Kentenich, Belmonte, and the Church.

Is this idea too much for us? No, Fr. Marcelo said emphatically, and referred to Mother Teresa of Calcutta and her greatness in the dark night of faith, and Don João Pozzobon, “the little donkey” who received the “grace to understand the origin.” 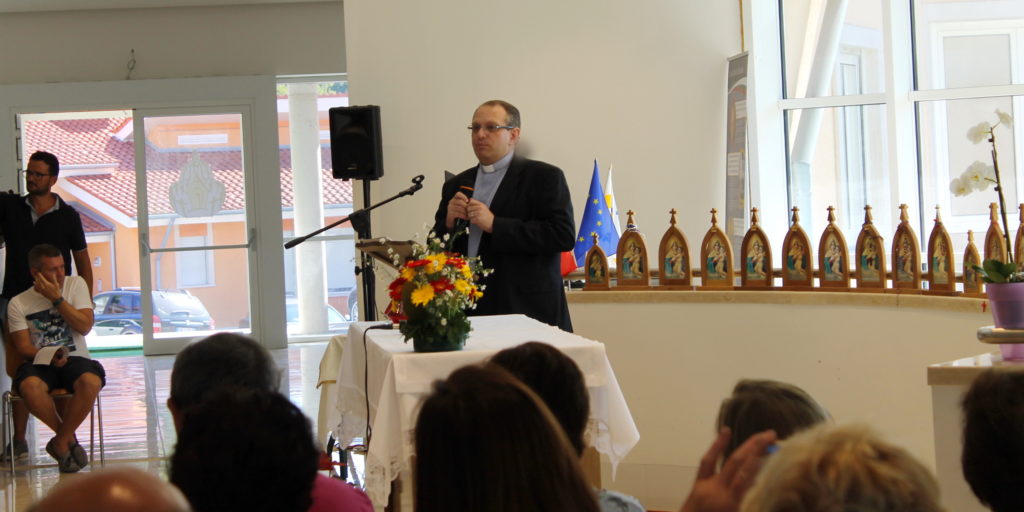 Even more people arrived after lunch, during the prayer of the Rosary, which took place inside the house as a result of the suffocating heat. Many of them had been at the canonization in the morning and they shared something about this radiant event, one of the main highlights of this Holy Year of Mercy. The brief testimonial from the Abram couple and small film in Italian about João Pozzobon formed part of the other programme.

“We are instruments that the Lord uses ans he needs them, especially with our human weakness,” explained Fr. Daniel Lozano in the homily, recalling that Our Queen of Belmonte will help us in the shrine to be the Lord’s disciples and apostles.

The meeting ended in the shrine with a blessing and the renewal of the Covenant of Love.  Even though they didn’t finish everything, because something important was about to happen: the prolonged and relaxed time to chat and share, what we call the “goodbyes.” 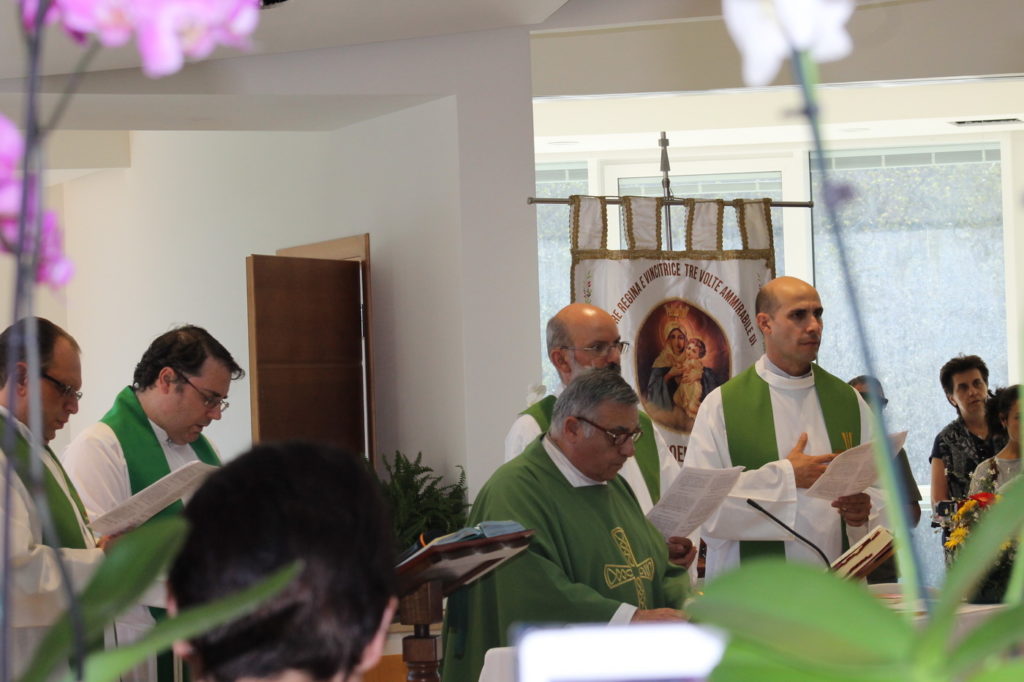 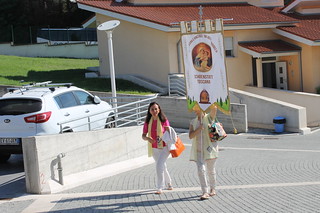