A spring breeze, a beacon that guides many

“One seldom sees a 15 year-old, who is already so mature and rich in every aspect. I still recall the first baby steps that we took as a community…” This is how Fr. Antonio Cosp remembers the beginnings of the Schoenstatt Family in the Diocese of San Lorenzo (DSL), which now joyfully and proudly celebrated its 15 years of life, where the National Shrine of Tupãrendá is located.

On 4 January 2001, a group of people met to found the Schoenstatt Movement in the Diocese of San Lorenzo, recently established by St. John Paul II, among them, was Fr. Antonio Cosp along with Ingrid and Elio Acosta, who belong to the Apostolic Federation of Families.  It was a little seed planted in the San Lorenzo field. A very young seed sprouted, developed, and desired to continue growing to serve the Kingdom of God.  Currently there is a fruitful and growing Schoenstatt presence in seven cities:  San Lorenzo, Itauguá, Capiatá, Ypacaraí, San Antonio, Ñemby, Itá, with more than forty couples’ groups in the Family Branch and hundreds of people in other branches.

On Sunday, 18 September, the Schoenstatt Family from San Lorenzo celebrated their traditional Covenant Day with the Blessed Mother. Around 1,800 people came very early to the Mass at 9:00 a.m. Fr. Antonio Cosp celebrated, and gave the families a clear message for the Movement’s 15 years and the organic growth of the diocesan family.

Everyone emotionally demonstrated the San Lorenzo charisms: joy and enthusiasm. They live a young faith; at the same time, it is a firm one in the everyday apostolic works for a society that poses so many problems and conflicts.

One of the milestones was the parade of couples that showed their apostolate, their social work, and proudly stressed every group’s best. The best presentation received a prize, and it was a beautiful thing to see the diversity and wholesome competition with a great prevailing unity as they participated in the challenge.

After the blessing of the food, people of all ages from little children to grandparents sat at each table, sharing the food and also smiles, love and affection.

Artistic presentations, songs and drawing enlivened the afternoon, interrupted only when the Diocesan Branch Leaders, Joryi and Pablo Enciso, launched the San Lorenzo MTA Magazine within the framework of the 15 years.  In its pages, there were writings, history, anecdotes, experiences that related to the beginnings, the development of this large Family that has an intense life, life in abundance and many dreams and desires. As Fr. Antonio said: It is a spring breeze and a light that guides many.

San Lorenzo’s Schoenstatt road is young, daring, and full of love. It is a luminous beacon that guides with the light of love and understanding. 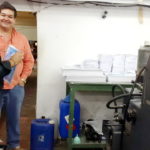 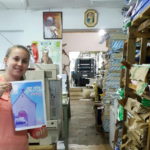