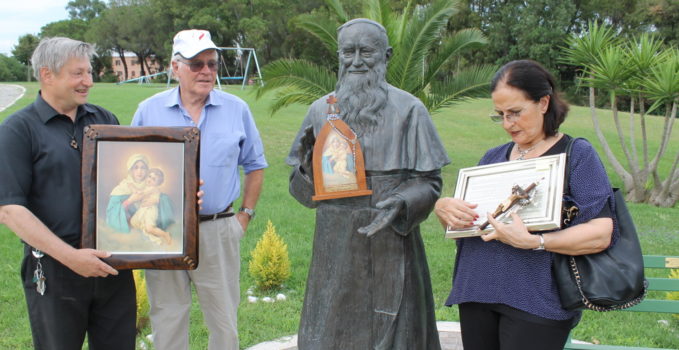 Beginning on Pentecost: a pilgrimage to Belmonte to present the “Gaucho Blessed Mother” and the Lord of Miracles

On Pentecost Sunday, 15 May 2016, the “Belmonte Meeting,” near Buenos Aires was unplanned, but it was very fruitful. The plan was to discuss the Schoenstatt Rosary Campaign, but when meeting on Pentecost…one should be prepared for any surprise!

After a conversation about the historic experiences during the blessing of the Shrine of All of Us in Rome in 2004, such as when the accident with the MTA picture for the shrine occurred or when hundreds of Pilgrim Mothers were raised, and lastly when the International Auxiliary MTA along with several missionaries with their Pilgrim Mothers, led the procession through the Vatican Gardens, the decision was made. We will begin to develop and design symbols for Argentina’s room at the Fr. Kentenich Domus, and we committed to convey enthusiasm for Belmonte to Argentina’s entire movement! Moreover, they made a half- crazy decision: A small delegation would travel to Rome in July to present a picture of the MTA and a cross for Argentina’s room.

However, they did not wait! The small delegation advanced their plans, and it took place in June. The Belmonte’s Queen was in a hurry. 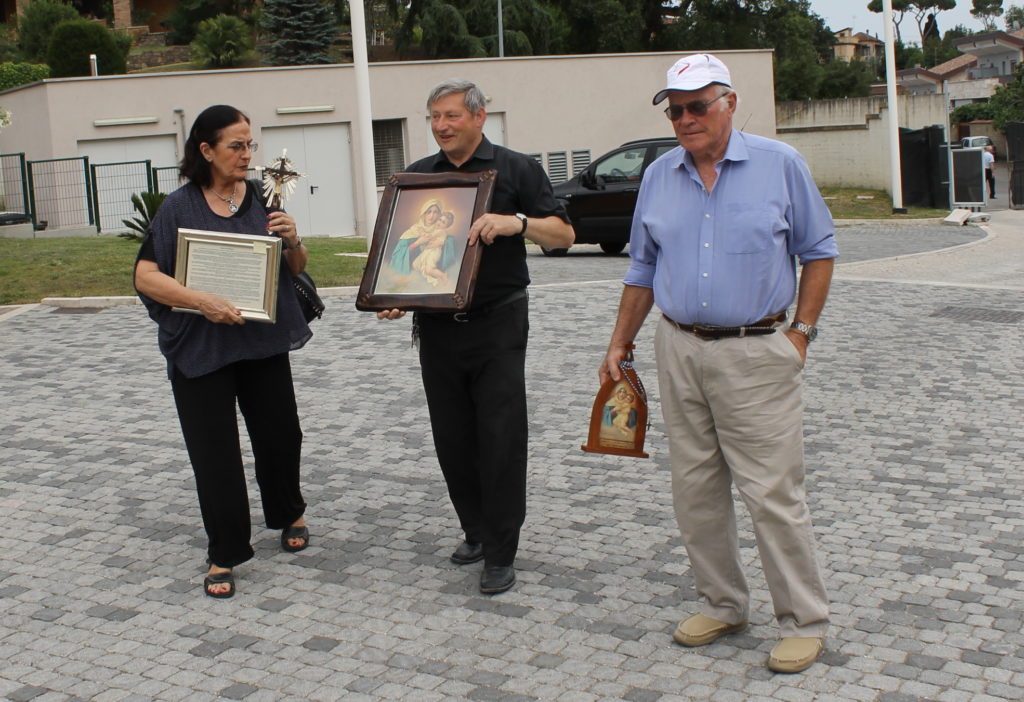 The small delegation from Argentina arrived at Belmonte after a festive Mass with Pope Francis in St. Peter’s, on the afternoon of 29 June. Fr. Frantisek Jirasek, from the Czech Republic, who replaced Fr. Daniel as Rector during vacation time, cordially welcomed them, and he instantly fell in love with the “gaucho” picture of the Blessed Mother, made from carob wood and joined with leather cords. He offered to take the picture, and he did not let go of it until it found its temporary place in the cabinet with the jars at Casa dell’alleanza [Covenant House], waiting for the inauguration day of the “Domus Pater Kentenich” House.

Fr. Frantisek explained the idea that motivated the house’s design. The house is like a shell, and the entire ground has a spiral motif with a whirlpool emerging from the fountain – of the Shrine – and opens to infinity. “At the beginning, it was simply the architect’s idea to adapt the building to the land,” Fr. Georg Egle added. The spiritual foundation came later, this message is attached to Fr. Kentenich’s dream for the Rome Shrine: presenting all of Schoenstatt to the service of the Church. “This is the Schoenstatt Shrine reaching out,” Mercedes MacDonough summarized. “It is the Schoenstatt Shrine that places itself at the everyone’s service, it belongs to the Campaign.”

During the Mass at the Shrine, with all the symbols on the altar, they prayed for Belmonte’s fruitfulness, and for everyone who will someday stay in room 101, in “Argentina’s” room, and will feel the graces of Schoenstatt Argentina’s national mission: “With Mary, Family of the Father.” In conclusion, Fr. Frantisek, explained to the Italians who were present, that they were living a historic moment. After Mass, many of them wanted to kiss the picture, the cross, and the Pilgrim Mother.

Then, they went to Fr. Kentenich’s statue to present the symbols to him, and finally they took them to the house. 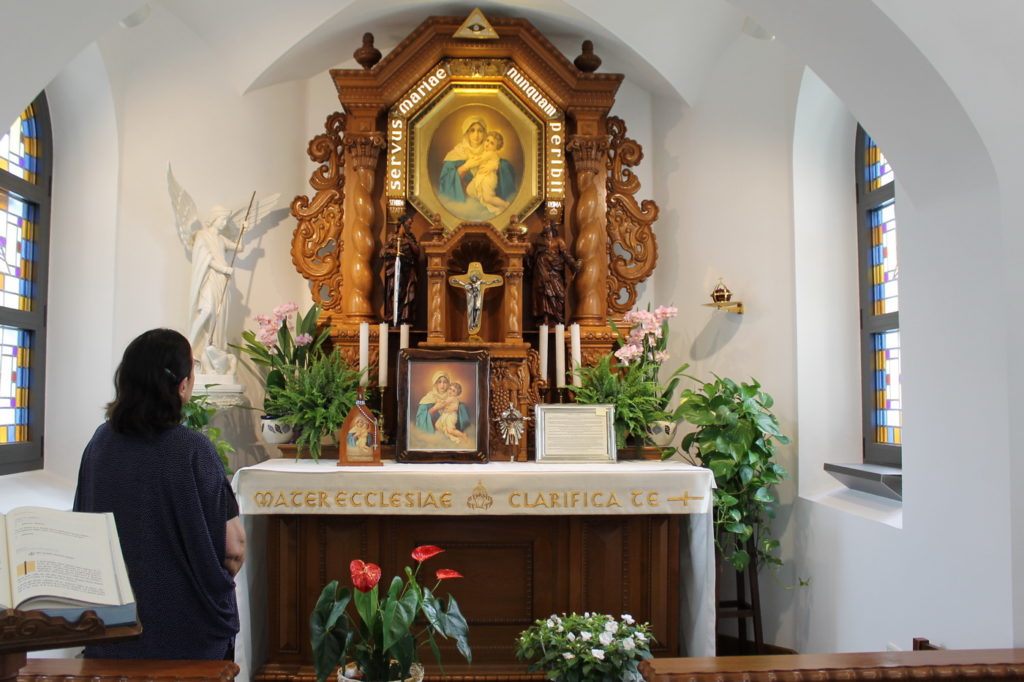 The delegation is truly small, but they think and dream “big!” They not only took the symbols for Argentina’s room, but they also took a Pilgrim Mother and a little novena booklet to João Pozzobon, to “raise the flag” in the João Pozzobon Hall, one of the three meeting halls in the House. The halls are dedicated to outstanding Schoenstatt personalities: Fr. Franz Reinisch, Gertraud von Buillion and João Pozzobon.

Ana Echevarría and Mercedes Bonorino, of the Vice- postulation and co-founders of the Campaign not only in Argentina, but also internationally, along with other pioneer missionaries, recently assumed the responsibility of making the effort to attach the world’s entire Rosary Campaign with Pozzobon Hall in the heart of Belmonte and the Church. There is already an idea: to invite everyone to send photos of wayside shrines and places, where the Campaign exists, so that these thousands of photos can be transformed into a picture of the Original Pilgrim Mother for this hall.

As an expression of this desire, Mercedes MacDonough took the Pilgrim Mother to this hall – still under construction, and as a sign of belonging (motivated by Gertraud von Bullion’s photo at the Hall dedicated to her), she left the novena hanging on one of the hall’s large windows that overlooks the Shrine and the wayside shrine. 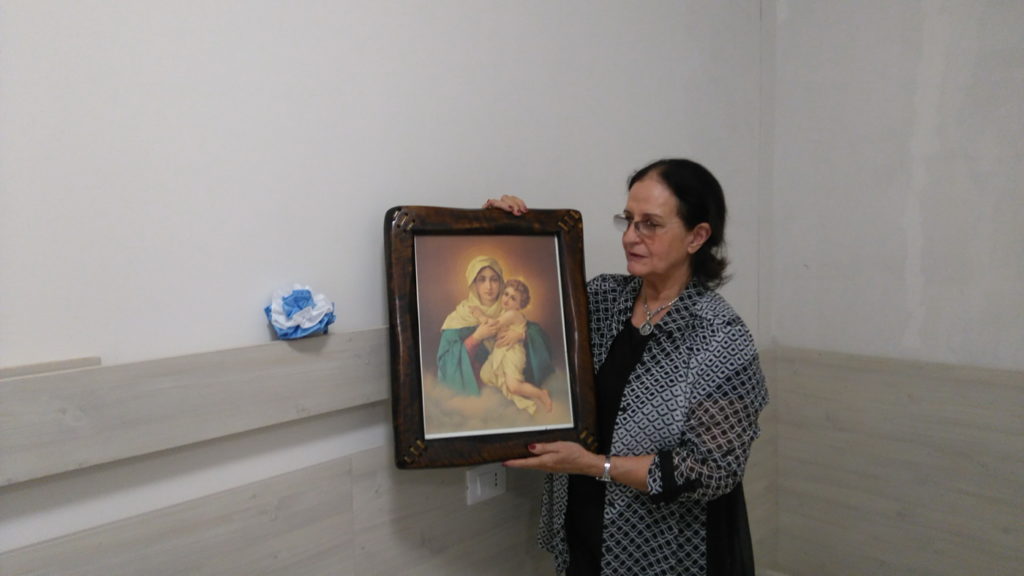 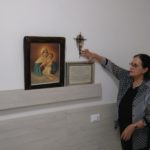 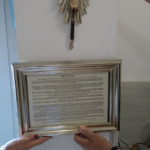 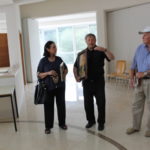 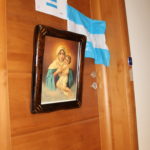 The following day, the room was open; they symbolically placed the picture of the Blessed Mother and the Cross of the Lord of Miracles, and anticipating the bi-centennial of Argentina’s independence (9 July 2016), they placed Argentina’s blue and white flag on the wall.

They listened with great interest and amazement to Fr. Frantisek’s stories about how the Schoenstatt Family from the Czech Republic has been strongly attached to Belmonte since 1989, and how they also economically conquered their room. Once they had paid for it, they moved on conquering and paying for fourteen “doors and windows.” They did all of this with small donations from many people… with great commitment and with the conviction of the mission of this shrine in Rome.

Fr. Frantisek had the idea of leaving the symbols, well labeled, in the cabinet where the jars are kept. It is an idea implemented for the other countries as well like Australia and the Philippines, that have already presented their symbols, and perhaps it will be an inspiration for others who have not yet decorated their rooms.

The Argentineans and everyone who visits Belmonte during this year are invited to ask and to look for the cabinet with the jars and the symbols from every country! Here the jars presented during the blessing, material with information about Belmonte, and several souvenirs are available. It is worthwhile!

Upon leaving Belmonte, ideas already were emerging: wouldn’t it be good to have an explanation about the symbols and about the history of the Lord of Miracles in the rooms or in the house? What about a book with a page for each room? Perhaps an extra page for each country on the Belmonte website? Or, something still more creative? 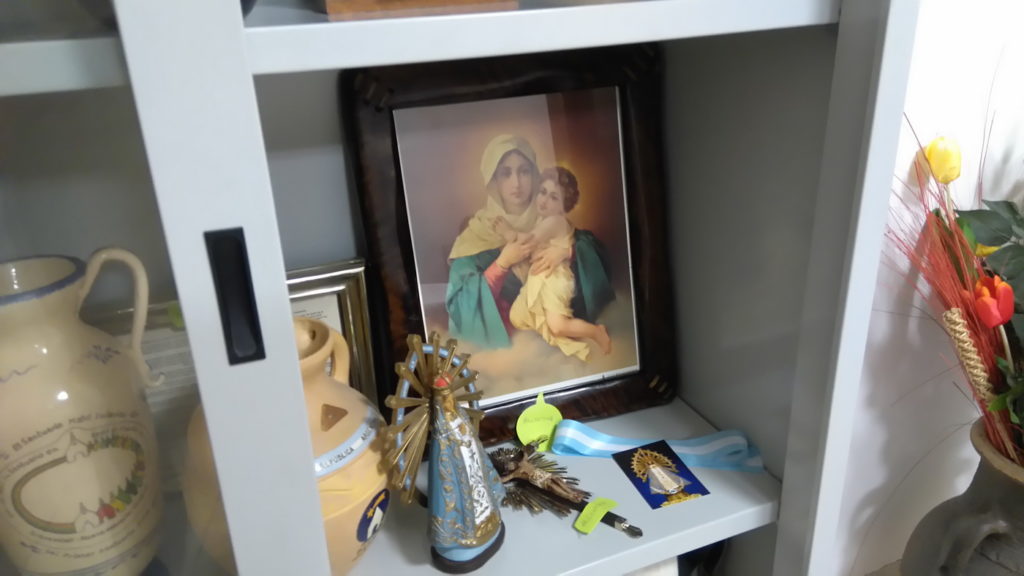 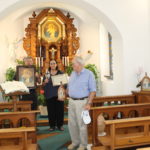 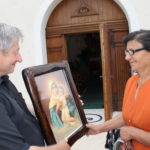 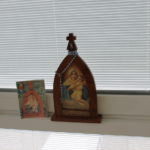 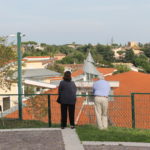 More on the “Country Rooms” at Belmonte

I want to contribute to the Room of Argentina

I want to contribute to the Pozzobon Room 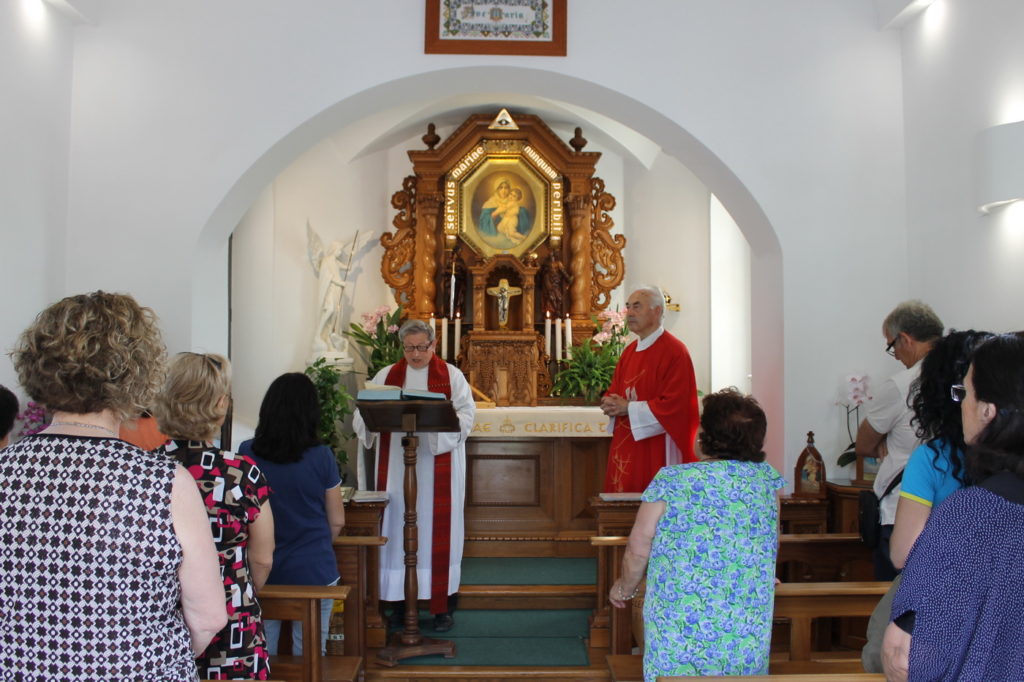