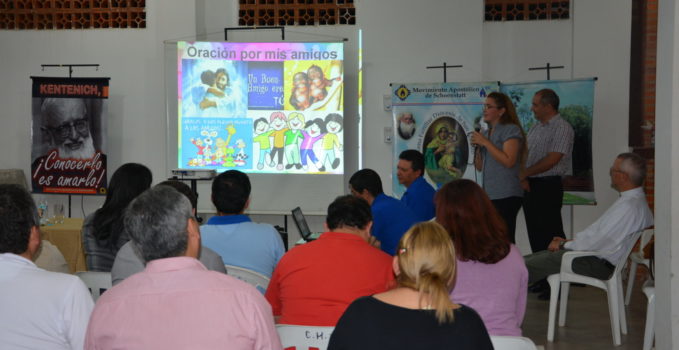 On Monday, 4 July, the Schoenstatt Movement’s group leaders from the San Lorenzo Diocese met at the María Auxiliadora [Mary Help of Christians] Chapel. Fr. Pedro Kϋhlcke spoke to them about Fr. Kentenich and his fatherliness, which made it possible for all of them to be present in that place as members of a large family, and of a large movement with a father and founder, who is the most faithful reflection of God the Father. The participants had several discussions and exchanges with Fr. Kϋhlcke about Fr. Kentenich’s life and his humility in visiting Latin American cities like Santa María, for example. The message he gave was that of accepting the father and founder as a true father figure, especially for those spiritual orphans, so that they can go on mission in this world promoting God’s kingdom.

At the talk’s conclusion, the Diocese of San Lorenzo’s Family Branch presented Fr. Kϋhlcke and the Branch Leaders, Joryi and Pablo Enciso with a gift; they expressed gratitude to those who promoted San Juan de Tupãrenda, which they described as a success for the diocesan families. At the same time, Tupãrenda ministry representatives expressed words of gratitude and encouragement for the future growth of this celebration that gathers the faithful and families.

A video capped the gathering as a summary of Pope Francis’ visit to Paraguay and the Children’s Pediatric Hospital of Acosta Ñu, in which the Schoenstatt Apostolic Movement played an organizational role.