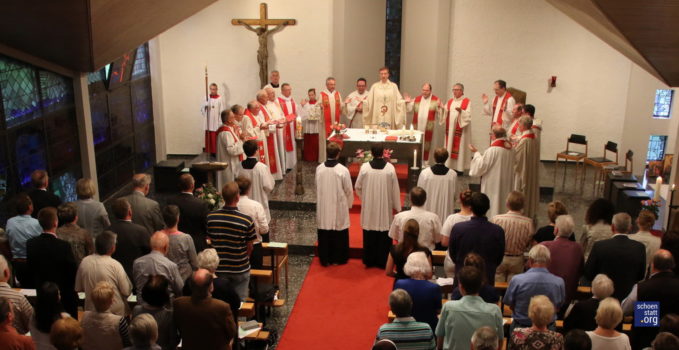 A surprise encounter with two witnesses of unity

The last Eucharistic celebration in a chapel that will no longer be a chapel is a sad occasion.  However, this celebration had a totally unexpected angle…

For more than sixty years, St. Pirmin’s Seminary in Sasbach, near Achern, Germany, served as a place where youths obtained their baccalaureates.  Approximately 160 of them were ordained as priests.  Schoenstatt Fathers Heinrich Walter, Franz Widmaier and many others were among them.  Inspired by Fr. Tillmann Beller who was in charge of the Schoenstatt Boys’ Youth during those years, they arrived at St. Pirmin’s, and they deepened their relationship with the Schoenstatt world.  Thus Schoenstatt Fathers or Schoenstatt Diocesan priests made important decisions in the seminary chapel.  It was a valuable place for vocations and also for the Schoenstatt Movement.  On the eve of the Solemnity of St. Peter and St. Paul, a Eucharistic celebration was held for the last time in this chapel.  Over the years, the number of seminarians of this “minor seminary” has greatly decreased so that those responsible at the diocesan level decreed its closing.  For many people attached to this place, it was a cause for sadness.  In any case, Sasbach Catholic School will remain active as an important place.  The “Heimchule Lender” school, which has existed for several decades and which is attached to St. Pirmin’s has approximately 1,000 students.  Among them, some belong to the Schoenstatt youth.

Where did the St. Vincent Pallotti reliquary come from?

As a sign that the experience of the Church will remain alive in other places and because of concern for new vocations, after the Eucharist, important elements were given to those responsible for those places.  Upon taking inventory, a reliquary of St. Vincent Pallotti was found.  No one knew exactly how this reliquary arrived at Sasbach. Before the closing of the chapel and because of the importance that St. Vincent Pallotti has for Schoenstatt, it was natural to entrust this reliquary to the Oberkirch Schoenstatt Center, which is located a few kilometers from Sasbach.

Shortly before the presentation of reliquary, the mystery of its origin was resolved.  It was accompanied by a note explaining that according to Roman custom, Cardinal Bea had received the reliquary for his service toward the canonization of St. Vincent Pallotti.  Augustin Bea, a native of the Baden Riedböhringen region, had also been a student at Sasbach and as cardinal, he visited his school in 1961.  During this visit, he gave this reliquary to the seminary that had just been founded.

“Together for Europe” in the spotlight

For the Schoenstatters, who were present at the closing ceremony of the seminary, the celebration was also an encounter with St. Vincent Pallotti and with the person of Cardinal Agustin Bea. Among other things, the Schoenstatt Movement inherited the charge of the Universal Apostolic Confederation from St. Vincent Pallotti.  Cardinal Bea, as a pioneer of ecumenism, also has great meaning for us because he participated in the process of the Schoenstatt Movement’s recognition within the Church, and thus the responsibility for Schoenstatt on the Church’s path after Vatican Council II.  It was as if these two great figures of Church history wanted to be present shortly before the meeting of the “Together for Europe” Congress in Munich (www.together4europe.org ) in the recent process. 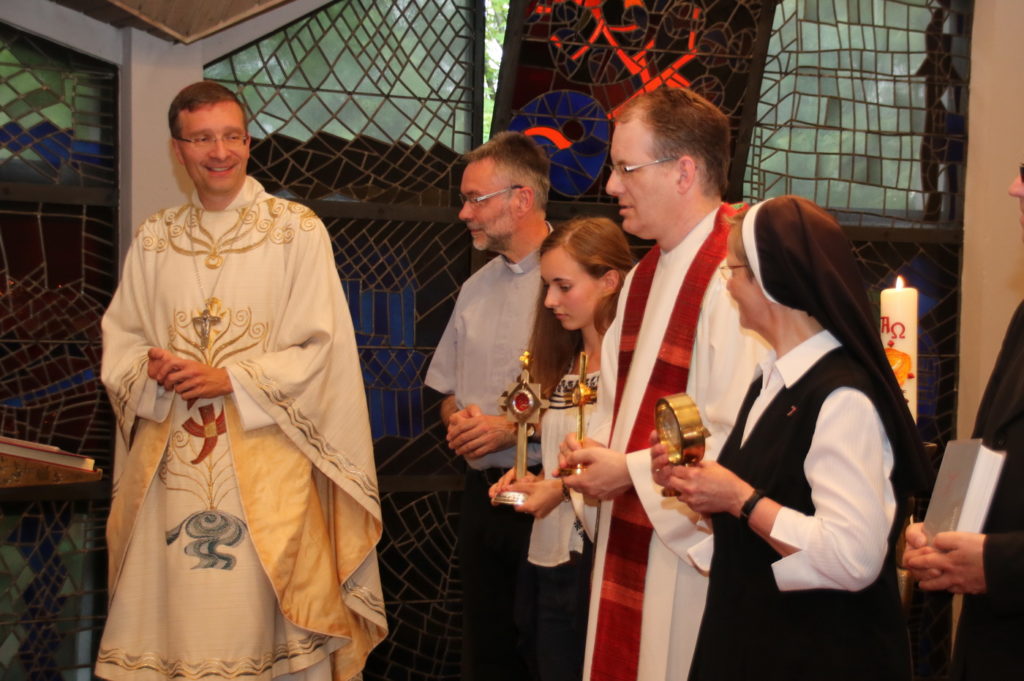