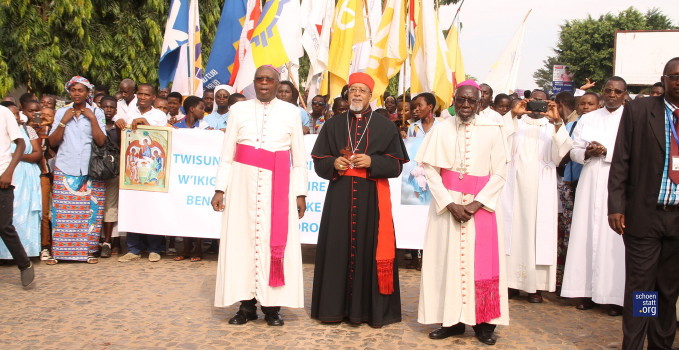 Three other “Desmond Tutus” at the Mont Sion Gikungu shrine

Three other “Desmond Tutus” met at the Mont Sion Gikungu shrine on Sunday 22 May 2016. This was no ordinary Sunday: it was the universal Church’s celebration of the Solemnity of the Holy Trinity. At the Marian shrine it was a three-fold celebration: Trinity Sunday, the 14th anniversary of the blessing of the big church dedicated to the Holy Trinity, and the closing of the month of Mary that brought together all the Catholic action movements in Bujumbura who arrived on pilgrimage carrying their banners to the sounds of a brass band and cymbals. They were accompanied by the ecclesial authorities. Bujumbura Archbishop Evariste Ngoyagoye accompanied the pilgrims with two visitors — the archbishop of Addis Ababa from Ethiopia and the bishop of South Sudan: envoys of the North African Bishops Conference who are in Burundi during this time of social and political crisis. The Holy Mass at 09:30 that celebrated all three events began on time and was packed. Even the steps were filled with pilgrims. 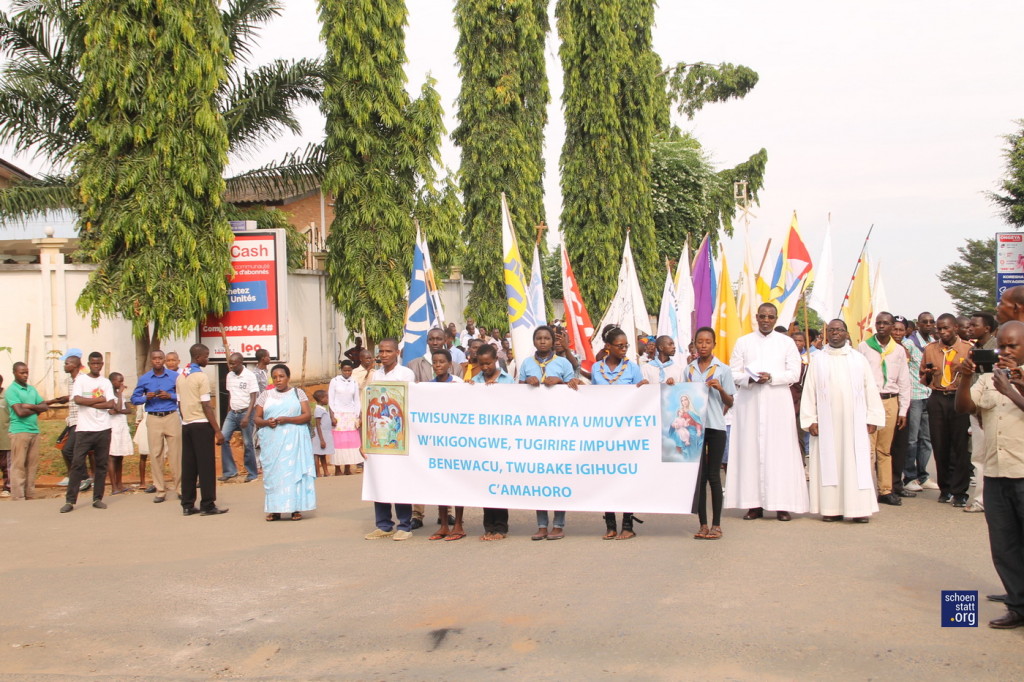 In his opening address, the rector of the shrine, Fr. Félicien Nimbona, welcomed the pilgrims in English, particularly the visitors who came from the other side of Africa: Cardinal Berhaneyesus Demerew Souraphiel, the archbishop of Addis Ababa in Ethiopia, and Monsignor Paride Taban Abraham Kenyi, the bishop emeritus and founder of The Holy Trinity Peace Village in South Sudan. The two prelates dedicated their lives to building a world of peace and reconciliation, giving them the name of “Desmond Tutu” in their countries. The prelates and people in South Sudan and Ethiopia also see Archbishop Evariste Ngoyagoye as the Desmond Tutu of Burundi, according to Monsignor Paride Taban Abraham Kenyi. This is why we say that the “three Desmond Tutus” met at this church dedicated to the Blessed Trinity in a Eucharistic celebration that also commemorates the day of its dedication.

Fr. Félicien also greeted the members of the Catholic Actions Movements who came on pilgrimage and recalled the triple celebration: the solemnity of the Holy Trinity, the 14th anniversary of the dedication of the Holy Trinity Church, in which the celebrations took place, and the closing of the month of Mary, the reason why the Catholic Action Movements were gathered. 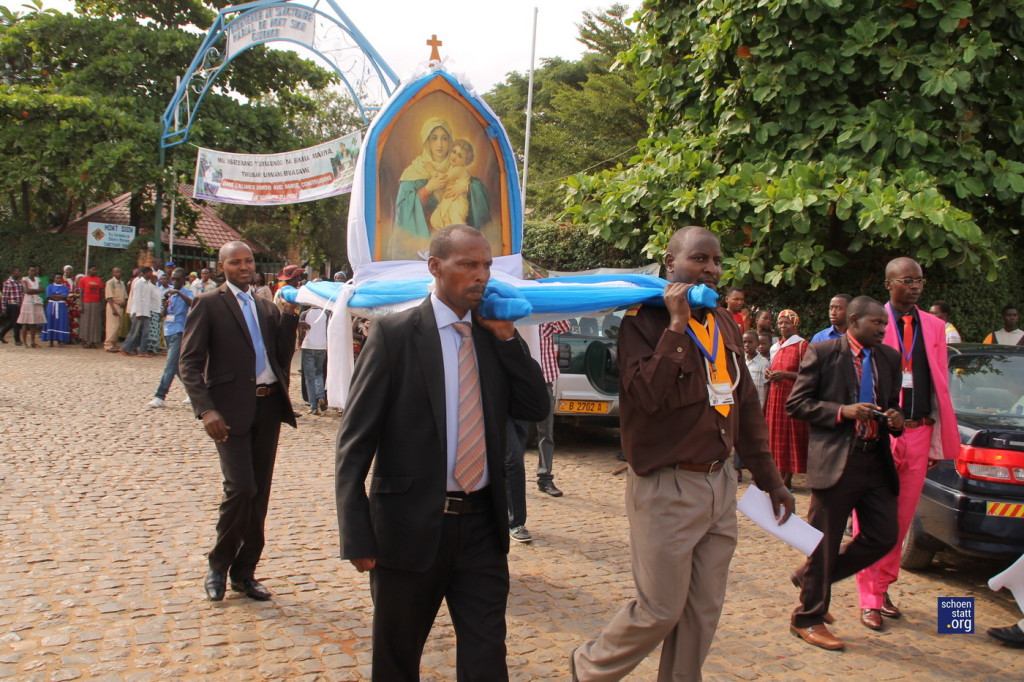 Building unity modelled on the example of God the Father, God the Son and God the Holy Spirit

In his homily, Archbishop Evariste Ngoyagoye, who presided over the Mass, began by welcoming the pilgrims from Mont Sion Gikungu for the 14th anniversary of the Holy Trinity Church that coincided with the early conclusion to the month of Mary (because the Feast of Corpus Christi would fall on 29 May). He also told the congregation a little bit about the mission of the two distinguished guests, saying that they had been sent by the North African Bishops Conference to assess the security situation in Burundi.

The archbishop said that the month of Mary is an opportunity to recharge our batteries in the presence of Our Lady, the Mother of Wisdom. Commenting on the gospel, Archbishop Ngoyagoye, emphasized the importance of a strong faith in the Holy Trinity, a Catholic dogma that is difficult to understand. He invited the faithful to build unity modelled on the example of God the Father, God the Son, and God the Holy Spirit. 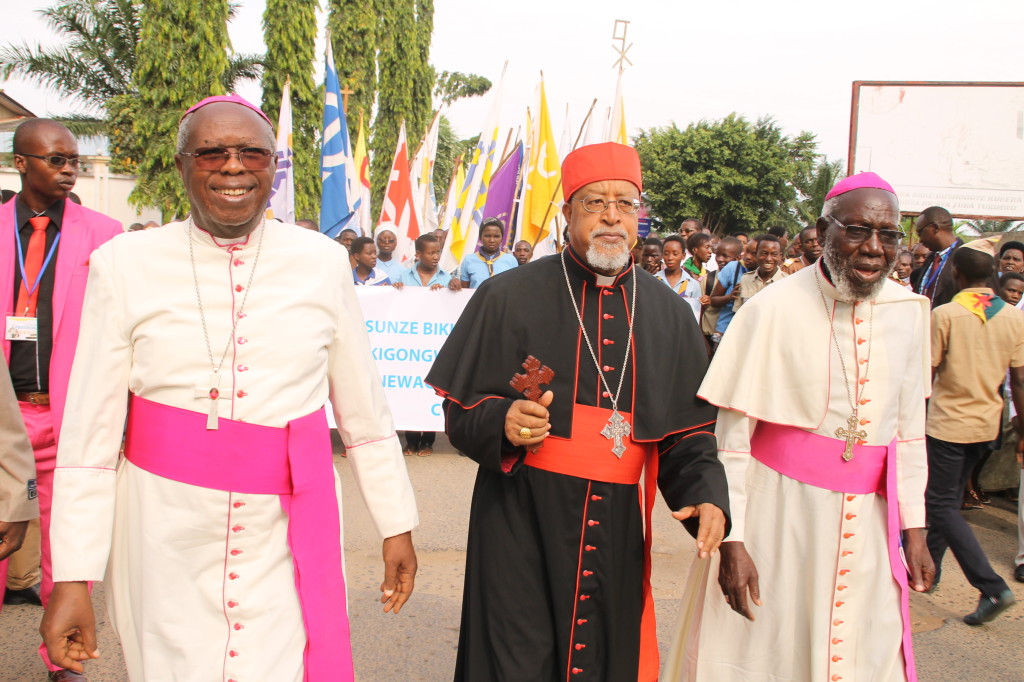 Pray for the Arusha negotiations…

Just before the end of his homily, the Bujumbura archbishop invited the faithful to pray for the Arusha negotiations so that the Holy Spirit would “visit” the representatives of the population of Burundi, guide the discussion so that that they could return home with a positive solution for peace and security in Burundi.

The offertory included the procession of the symbols offered by the Catholic Action Movements: a candle symbolising the light each of us should take to others, a bouquet of multi-coloured flowers symbolising the fruits we’re called to produce in our lives and a globe of the world offering up all of humanity to the Holy Trinity. Finally, 14 candles were brought up as a symbol of the 14 years of the dedication of the Holy Trinity Church.

Three speeches followed the Mass: the representative of the Apostolate of the Laity and the two visiting prelates. A procession to the shrine closed the festivities and the final blessing was given in Latin by Archbishop Evariste Ngoyagoye and his two guests. The drums sounded, adding beauty to the celebrations, together with a traditional presentation by members of the Catholic Action Movement.

Source: Closing of the month of Mary at Mont Sion Gikungu Shrine