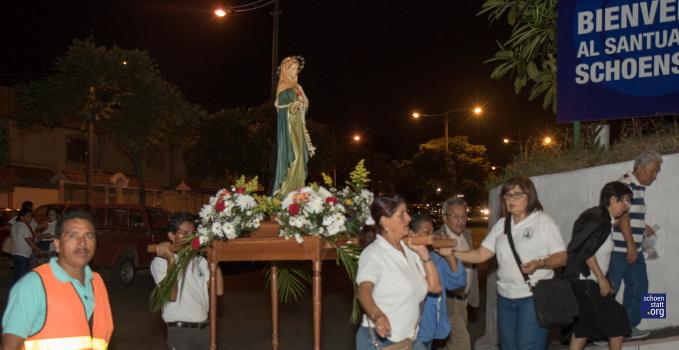 A record 15,000 join in Pilgrimage for earthquake victims and thousands affected

Saturday, 7 May 2016, during the Year of Mercy, the pilgrimage, which has occurred annually since 1978, to the Guayaquil Schoenstatt Shrine, a Holy Door of Mercy, had an unprecedented number of participants in the history of this pilgrimage: approximately 15,000 faithful attended. 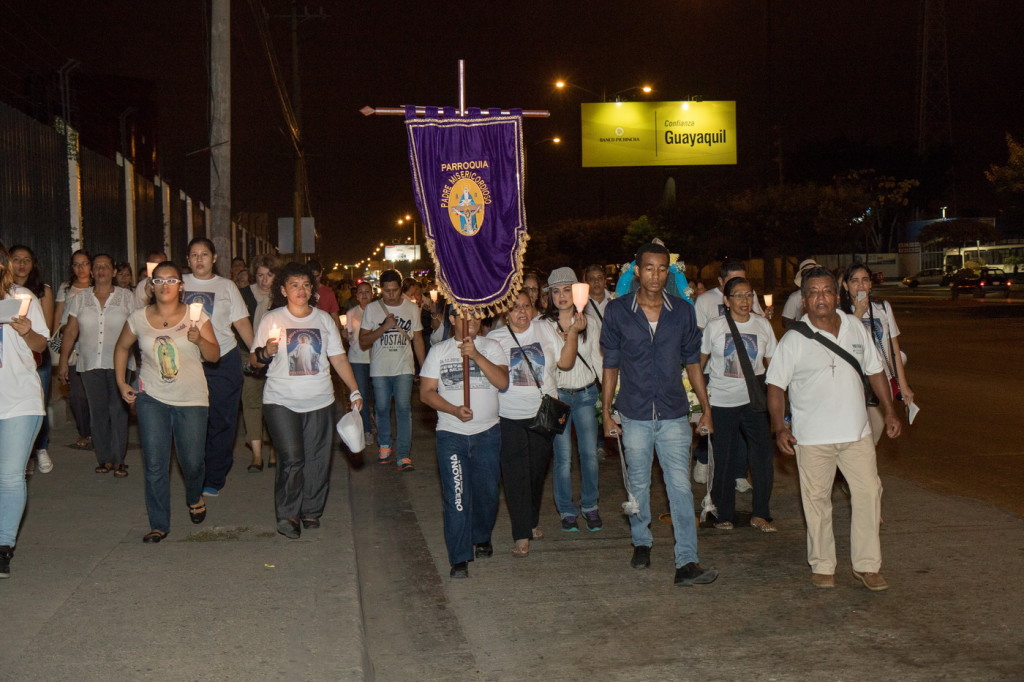 The Archbishop of Guayaquil, Luis Gerardo Cabrera, designated the Shrine as a Holy Door of Mercy. The faithful of different ages, ethnicities, physical and economic conditions participated with enormous fervor and devotion to the Blessed Mother and the Lord Jesus Christ. They went on pilgrimage from several and distant points in the city on foot: some walked up to twenty-five kilometers over several hours. There were also those who arrived by bus from the farthest parishes and from other provinces.

The points of departure for the pilgrimage route were announced in the media and on social networks that led to pilgrims setting out at dawn from the Guayaquil Cathedral and different parishes and places of the city.

Everyone joyfully felt like brothers/sisters, and they answered the Heavenly Mother’s call by singing songs, praying, and offering the pilgrimage effort not only for their personal intentions but also for the victims of the recent earthquake and for the thousands of affected people from Ecuador.

The first pilgrims began to arrive at the Shrine area around 4:00 a.m.; some walking and those from the farthest neighborhoods and provinces came by bus. It is important to emphasize that some of the first pilgrims, who arrived in several vehicles from Chone and other areas of Manabí, were strongly affected by the recent earthquake on 16 April 2016.

Among the varied groups that attended there were: associations, volunteers, the faithful, and friends. Decorated pictures of different devotions were seen, and they were placed close to the beautifully decorated altar with roses, close to the Queen’s throne. 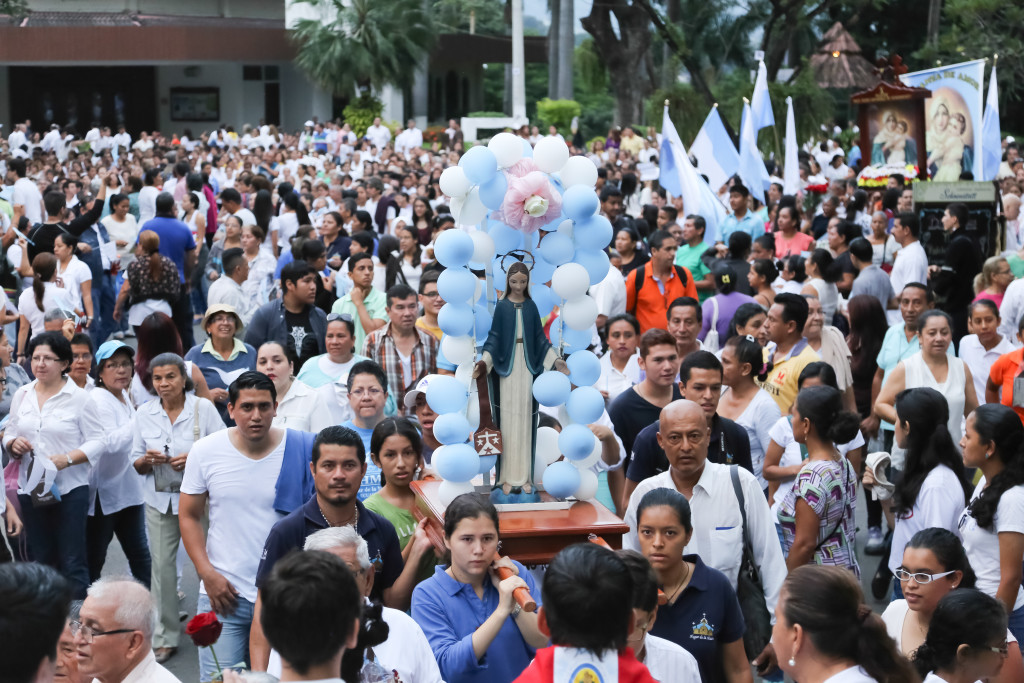 Plenary indulgence for those affected by the earthquake

Seventy-three priests also responded to the Blessed Mother’s call, offering the opportunity for confession. Thus thousands of the faithful could obtain a plenary indulgence. The Schoenstatt Girls’ Youth invited the pilgrims to offer this plenary indulgence for the 660 who died in the recent earthquake with the hope that they can reach heaven quickly. They presented the names of the deceased to the pilgrims, who arrived at the Shrine, for this purpose. 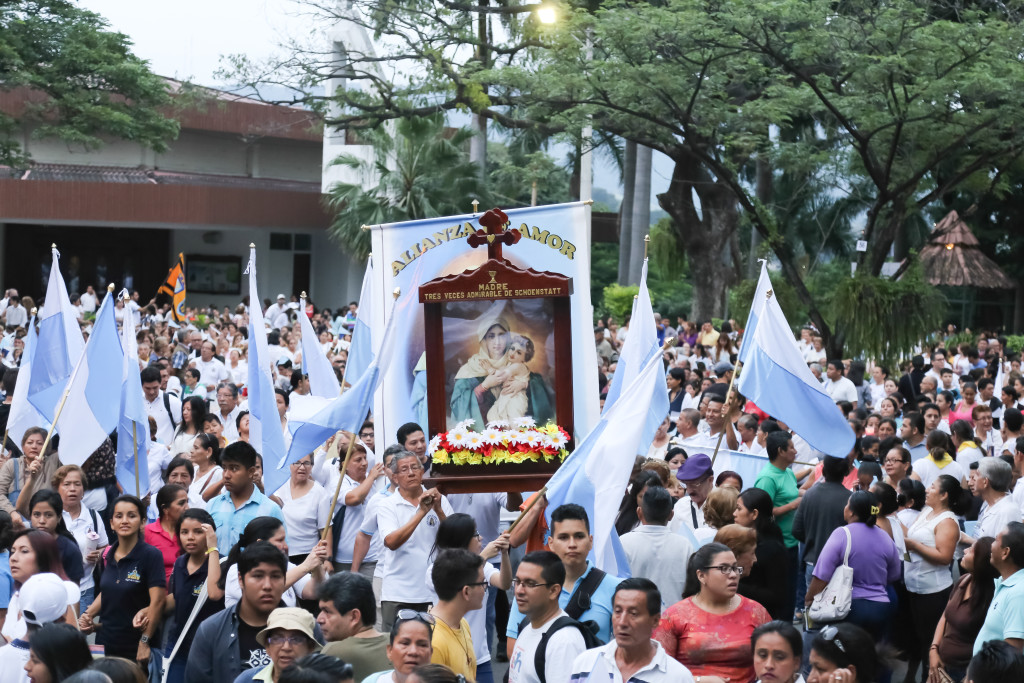 The indispensable volunteers: behind the scenes

The Rosary was prayed at 6:00 a.m. and at 7:00 a.m., the Archbishop of Guayaquil, Luis Gerardo Cabrera, who was joyfully welcomed by the faithful, celebrated Holy Mass. The Auxiliary Bishop, Iván Minda Chalá, the parish priest, Fr. Juan Pedro Vicente Herrero and the Schoenstatt Fathers Eduardo Auza, José Luis Nieto and Pablo Gajardo con-celebrated.

The faithful waving 13,000 little blue and white flags welcomed the monumental picture of the Mother Thrice Admirable that was carried in on a platform, and she was taken to her throne beautifully decorated with roses. 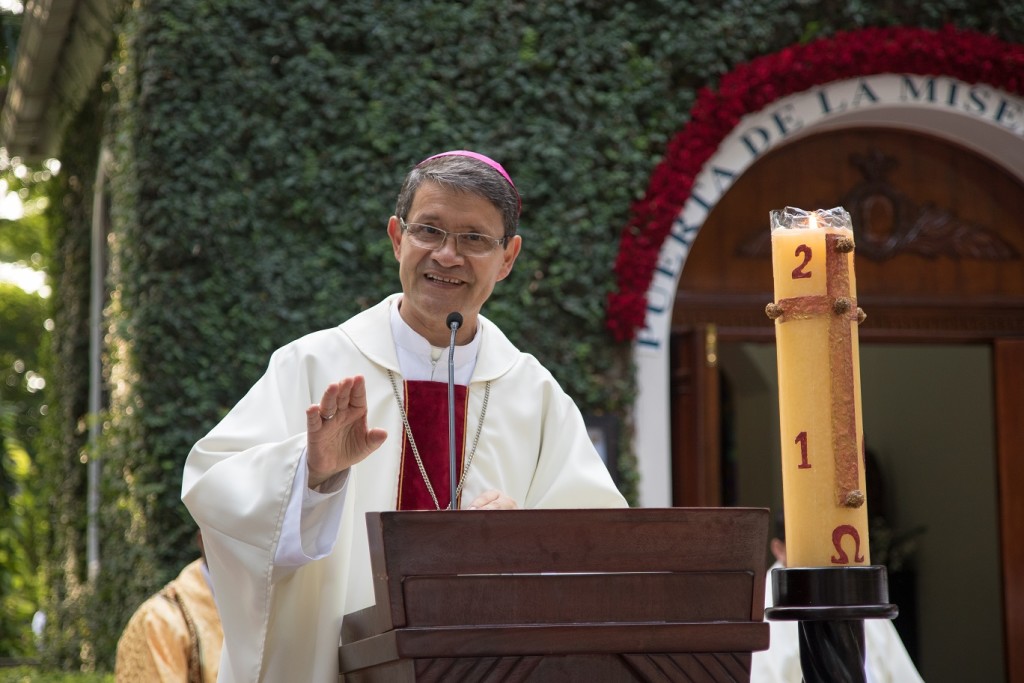 Heavenly moments inside the Holy Door

After Holy Mass accompanied by the Schoenstatt choir, the participants had the opportunity to enter the Shrine through the Door of Mercy with the youth choir, Kairos, providing background music. The pilgrims prayed fervently in the Shrine, making petitions and giving thanks for answered prayers. Profound moments of conversion were experienced within the Shrine.

In summary, they were heavenly moments! The Blessed Mother’s presence was felt, and God the Father’s infinite mercy was experienced. 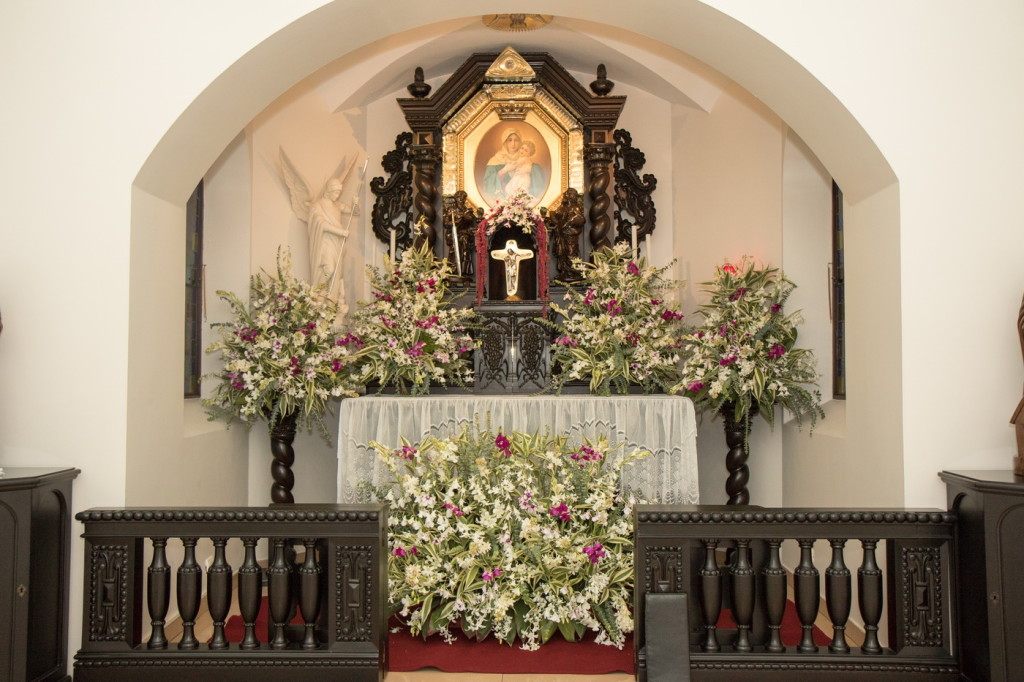