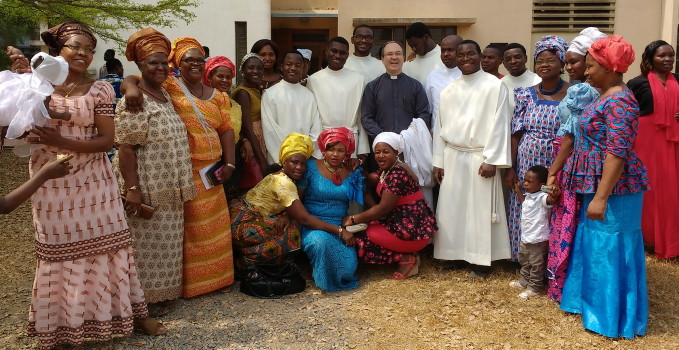 Recently Fr. Javier Arteaga and Fr. Pablo Pol (Regio del Padre) visited the Schoenstatt Fathers in Nigeria. Upon returning to Argentina, Fr. Pablo Pol asked Mercedes MacDonough for one hundred MTA pictures and for Pilgrim MTAs with the texts in English on the back…

A real story that was published in December 2002 on schoenstatt.org comes to mind:

“Nigeria is one of the “young” countries of the Campaign: it began in 1999 when Fr. Pablo Pol from Argentina – who was still a seminarian at that time – took a picture of the Pilgrim Mother from the Original Shrine in Germany. On 1 October, one of the novices of the Schoenstatt Fathers community from Nigeria manifested his willingness to begin the Campaign. “Often it said that charity begins at home,” this novice commented. “Thus, on 3 October, this image began to travel here, traveling to the rooms of all the brothers, who were interested. The support and encouragement of my brothers made me think that this day would be recorded forever in the Schoenstatt history of Schoenstatt in Nigeria. On 7 November, the Pilgrim Mother finished her travels in Fr. Fred Kistler’s room. The same day four novices were commissioned as missionaries. The Campaign began in Nigeria with the first picture – Fr. Pablo’s and Fr. Roman’s from Poland – that were sent to two families in Ibadan… Upon receiving the picture, the families were very happy and they immediately asked that she remain for more than three days, which is usual. When the Pilgrim Mother was taken from their home, one of the families wanted the Blessed Mother enthroned in their home.

Furthermore, the mother exclaimed: it is if the entire Church was brought to our home, wherever the Blessed Mother is present, it is like a woman who leads her children to that Church.

More families showed interest, more novices wanted to spread the Schoenstatt Rosary Campaign in their towns during vacation. It was like an adventure to obtain these holy MTA pictures, and it was truly an event when the one hundred holy pictures finally arrived in November 1999. A carpenter was taught the art of making the frames and the first Pilgrim Mother “made in Nigeria” was ready on 13 November. Since then, the Pilgrim Mother has not stopped visiting her own in Nigeria.” 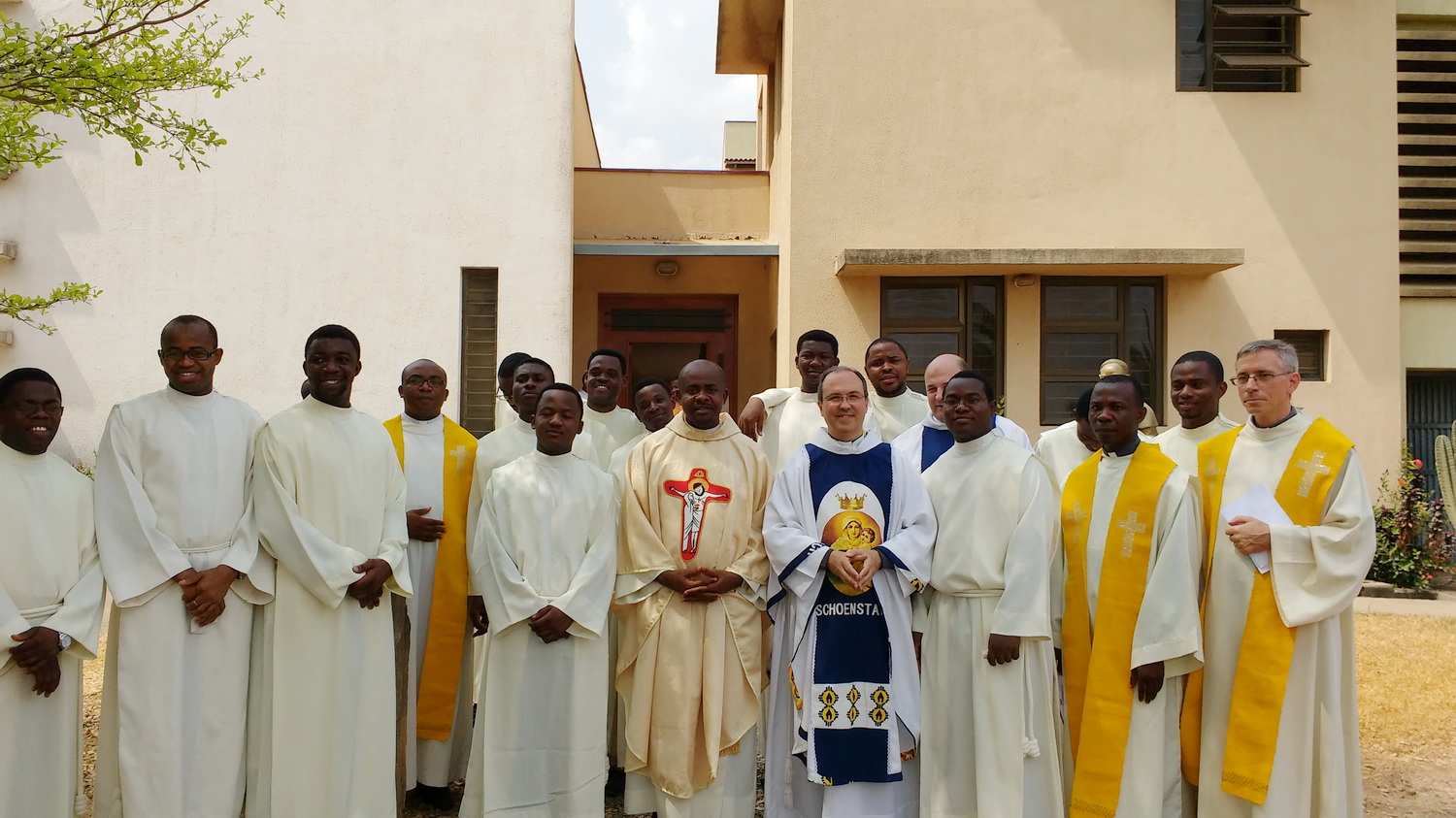 Twenty Nigerian Schoenstatt Fathers at the service of the MTA

Today there are twenty Nigerian priests; eleven of them are working in Nigeria, six in Germany, one in England and two in Italy. There are also forty-six seminarians and six novices who are studying in Nigeria.

The priests have different tasks, and they are in several places. Four of them carry out internal tasks in education or within the Movement, nine study and/or do pastoral work in Europe (Germany, Rome, Manchester), the other seven are in different places in Nigeria working on their parish practicum, two are already pastors, simultaneously, some are taking a post-graduate course.

There is much to do in the Nigerian Movement; it is a recent foundation.

“Every kind of support would be very helpful for the priests’ education and to expand Schoenstatt,” Fr. Javier Arteaga explained. Support in the form of one hundred pictures for the Pilgrim Mothers, prayers, by taking an interest in them, and with Mass intentions or donations… 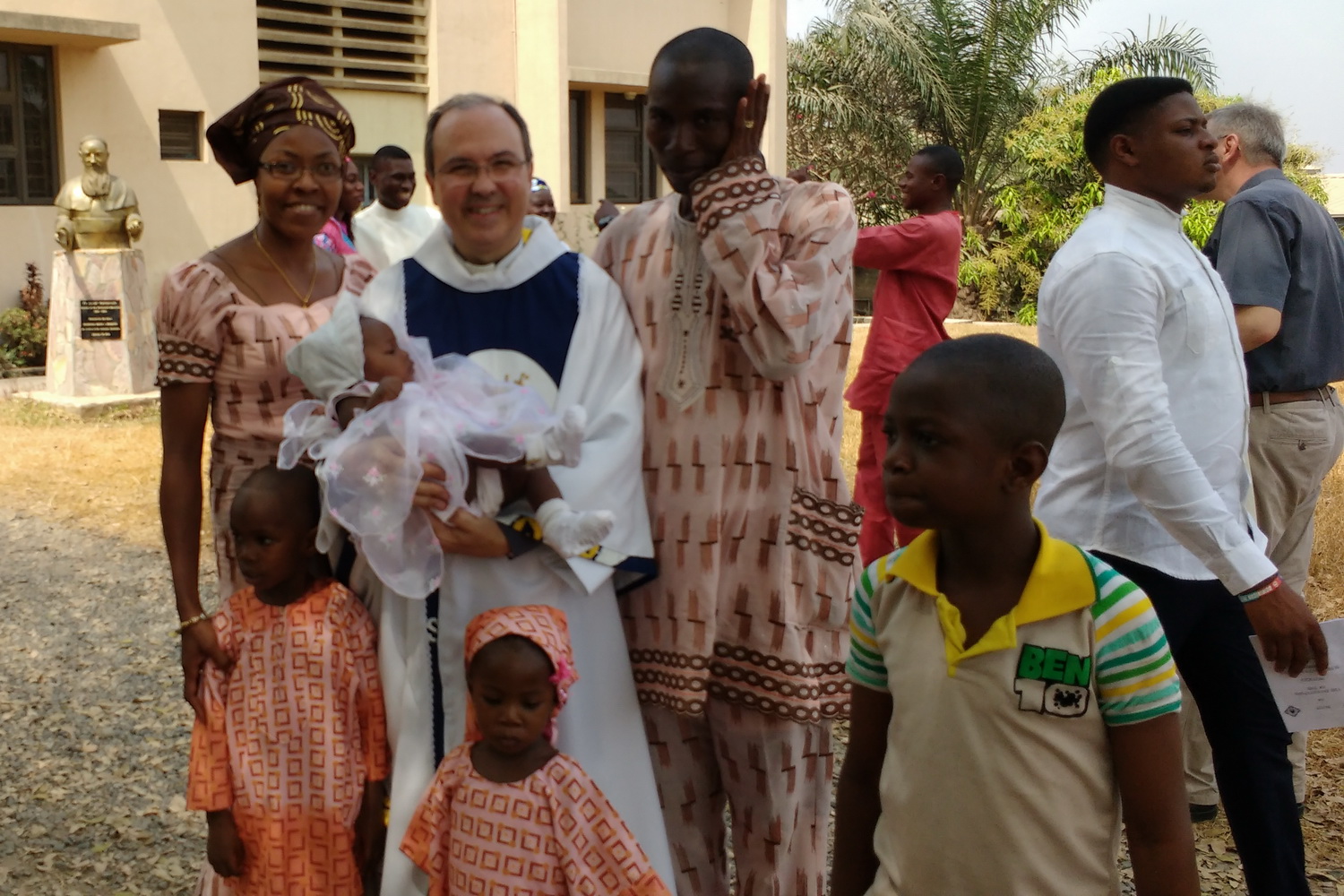 The first group interested in the Schoenstatt Fathers’ community, the first contacts, goes back to the years 1992-1993. The first group of candidates during those years studied philosophy with the Claretians in Nekede, Owerri.

In September 1997, the pioneers arrived: Fr. Alfred Kistler (Switzerland), Fr. Klaus Desch (Germany), and a year later, Fr. Román Haronska (Poland). The first years they were in eastern Nigeria: the studies of philosophy in Nekede, Owerri (until 2000), and sometime later, the novitiate in Umuahia (until 2004). Fr. Kistler was the superior and rector of the students, Fr. Klaus was the novice master of the first course, and then Fr. Roman for the following four courses until 2008. In 1999, the community moved to Ibadan, to the western part of the country, where they now have a center: a novitiate, seminary, Fathers’ house and the “Victory Shrine” were blessed in 2004. In 2005, Fr. Peter Chukwuma, the first Schoenstatt Father from Nigeria, was ordained. In 2006, the Regio del Padre (Argentina, Paraguay, Italy) accepted the request to assume responsibility for the Nigerian community, a process that led to the complete integration and unity with the Regio del Padre in 2011.

The Schoenstatt Fathers at Nigeria will accept intentions for Masses, and they will celebrate a Holy Mass specifically for the people, their needs, and those of their loved ones. And of course, they will do it with great commitment.

For Mass stipends for Nigeria:

Or send your Mass intention to [email protected] mention that is for Nigeria.