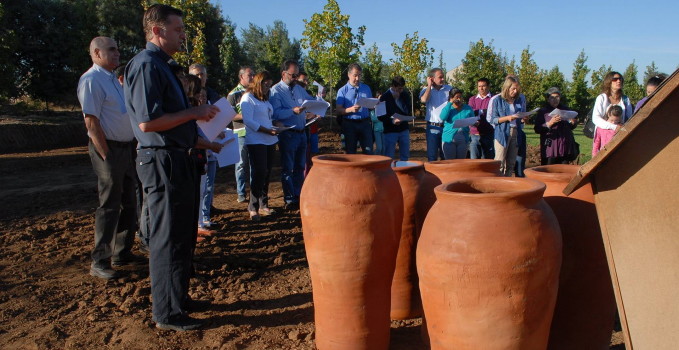 After twenty-four years, Talca’s Schoenstatt Family will have our Mother and Queen’s Shrine.She will establish herself in this “Tierra Escogida.”

This shrine will be consecrated on Saturday, 19 March 2016, and Diocesan Bishop, the Most Reverend Horacio Valenzuela Abarca’s will be present.

Tierra Escogida Schoenstatt Shrine is located in Talca, capital of the Maule Region in central Chile, a place eminently suited for agriculture and forestry; it is famous for its excellent fruit production, vineyards and wines.

The blessing of the cornerstone for the future Shrine was held one year ago, March 2015, in a beautifully touching ceremony with our Family’s presence as well as a large number of Covenant brothers/sisters from different parts of Chile. This sign unites us to our Father and Founder, Joseph Kentenich, and it calls us to make his words a reality: “We not only want to educate ourselves and to educate others; we also want to give the Blessed Mother the opportunity and the possibility to form and educate as many people as possible from here.”

During this year of spiritual conquest, the Talca Family offered to fill six-clay jars, holding 100 liters each, with water. They were filled with the personal effort of many spiritual gifts offered to the Blessed Mother represented by small, individual jars of water that will be poured into the larger jars. The goal was ambitious, but with the support of the large Chilean Family, they were able to make it a reality, filling all the jars to the brim.

The intention was to relate this to what occurred at the Wedding of Cana by imploring Mary to intercede with Jesus, so that he would work of the miracle of converting our water into the best wine and our “Tierra Escogida” into a Schoenstatt Shrine. The Talca area’s wine producers, members of the Schoenstatt Family, replaced the 600 liters of water with 600 liters of Mass wine that will be blessed during the same ceremony on 19 March, and then they will be distributed to the city’s parishes.

A shrine touching all of Chile

We are overcome by feelings of joy, excitement and gratitude to see our desire fulfilled.

Joy because our Mother and Queen will be among us to help us to be more children and brothers/sisters, taking us to the heart of Christ the Lord, and feelings for having struggled with perseverance and rigor so that she will establish herself in this place. Grateful to our Talca Family, the members of the Church and the residents of this city, who collaborated spiritually and materially in many ways to make the Shrine a reality.   We are especially grateful to our Chilean Schoenstatt Family from Arica to Magallanes and north to south that offered abundant contributions to the Capital of Grace to fill the jars.

We are grateful to the Fathers and the Sisters’ Institute for their constant accompaniment on the road of spiritual and material conquest, and especially to our Adviser, Fr. Miguel Kast, who has been a fundamental pillar to overcome all obstacles on the road with his paternity, strength and unconditional support.

For a more just society and one of solidarity

With this same joy and feeling, we offer our Shrine and ourselves as Mary’s instruments at the service of everyone, especially the Talca Church and its citizens. May they find a place for reflection, prayer and of encounter with God and among the people to be more fraternal and children of one Mother, embodying the Mission of the 31st of Mary, contributing to building a more just and united society.

At this moment, we find two “future Shrines” on the Schoenstatt Shrines map, Talca’s and one in San Juan, Argentina. On 19 March, Talca will be the present… We welcome you to the world of shrines, beloved, youngest Shrine, beloved Talca Shrine!

The Shrine of Talca on the map

Something will change on the map on 19 March… There will be a new Shrine.