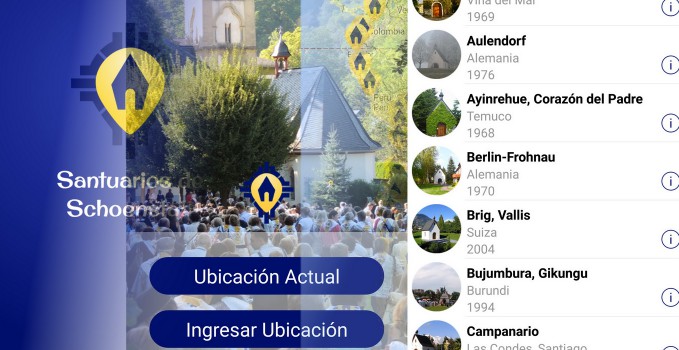 You’ve reached your destination…your shrine. An App that will take us to the 200 shrines of the world

“You’ve reached your destination,” the voice on the GPS says confidently. But I see nothing of my destination. I know that the Schoenstatt shrines are not that big and they can sometimes be somewhat hidden. But here, in the main square of a city, the shrine I’m looking for is definitely not here…and my GPS is not to blame for being lost. The reason is that I trusted the GPS coordinates from what appears to be a database of shrine addresses – in the service section of shrines.schoenstatt.de – but most of the data points lead to the centre of the city where the respective shrines are found, and not the shrines themselves. Bad luck.

“Where is the shrine in Costa Rica?” asks a tourist, a Schoenstatt pilgrim, in a message to schoenstatt.org. “There isn’t one yet,” is the response we’ve given many times, and it’s the same for those who want the address of the shrine in San Francisco or Kenya. There are still no shrines in these places. But how can people know? “I’m in the north of France in a car, how can I find the shrine in Cambrai?” A question asked in French that arrived in the middle of the night in Europe. Which member of the team speaks French, is online, and knows how to explain how to reach the Cambrai shrine which is actually located in Thun Saint Martin?

“How many shrines are there in the world?” “I am a student at the college in Londrina, where can I find photographs of all the shrines for a school project?” – “We are on holiday in Viña del Mar, which shrine is closest to our hotel?” – “I want to tour India and visit as many shrines as possible. How can I find them?” … It is no coincidence that the most visited page of the International Schoenstatt Centre in Belmonte website is the “how to get there” page.

Rainy holidays and a world map of shrines

Pedro Lázaro from Iquique, Chile towards the end of the last century (yes, in 1999) began to collect the first list of shrines of the world on his website, the product of meticulous research in collaboration with the schoenstatt.org team. But in those days, it wasn’t easy to find the shrines on Google Earth, which had just been launched, made even worse by the snail-paced internet connections. Later, Heinrich Brehm, from the Press Office (then international) in Schoenstatt made a page that was far easier to navigate and the already mentioned “shrines.schoenstatt.de” with the details of almost all of the shrines and the GPS coordinates for many of them, but not all of them were correct for lack of information and verification.

Until 2014, when something new appeared – a world map of shrines (and some wayside shrines) made by Matías Fortuño from Chile — and on a rainy holiday Norbert and Gertrud Jehle from Germany helped too: Gertrud put together a book of photographs, while Norbert searched for the shrines. With patience and commitment he found one shrine after another on Google Earth based on data on the world map, to verify the data and correct it as necessary. “I put the cursor in front of the door of the shrine,” he commented “because I didn’t want that a point in the roof could hide the shrine.”

“The information is wonderful, thank you very much. I’ll upload them during the week,” said Matías Fortuño, who had collaborated with the United Nations on geo-spatial information.

“The map I set up in Google is sometimes opened for editing, but then the shrines are moved to places that don’t match (the ocean, for example). I had to close it for editing, and left rather my contact details,” he commented.

Through the Vínculo [attachments] magazine on Facebook, they began to send corrections and information for wayside shrines that became a part of the map.

They worked as a team in Chile and Germany, looking together or with help from the schoenstatt.org collaborators for the shrines hidden under trees, such as the one in Jaraguá (Cassio Leal had to go to the shrine to test the information, because it can’t be seen from above) or in the middle of nowhere, such as the one in Paso Mayor, without any data (this shrine was not part of the original list, but was incorporated because it was on a list of shrines for Argentina, even though it does not look like a shrine and is not a daughter shrine) or without addresses, in the case of various shrines in India.

Step by step, Norbert Jehle developed the information to upload the location of the shrines as POI (Point of Interest) to the car’s navigation system…those who have it can drive along the roads of the world and between service stations, hotels and tourist destinations and will find the Schoenstatt shrines on the screen of their GPS. 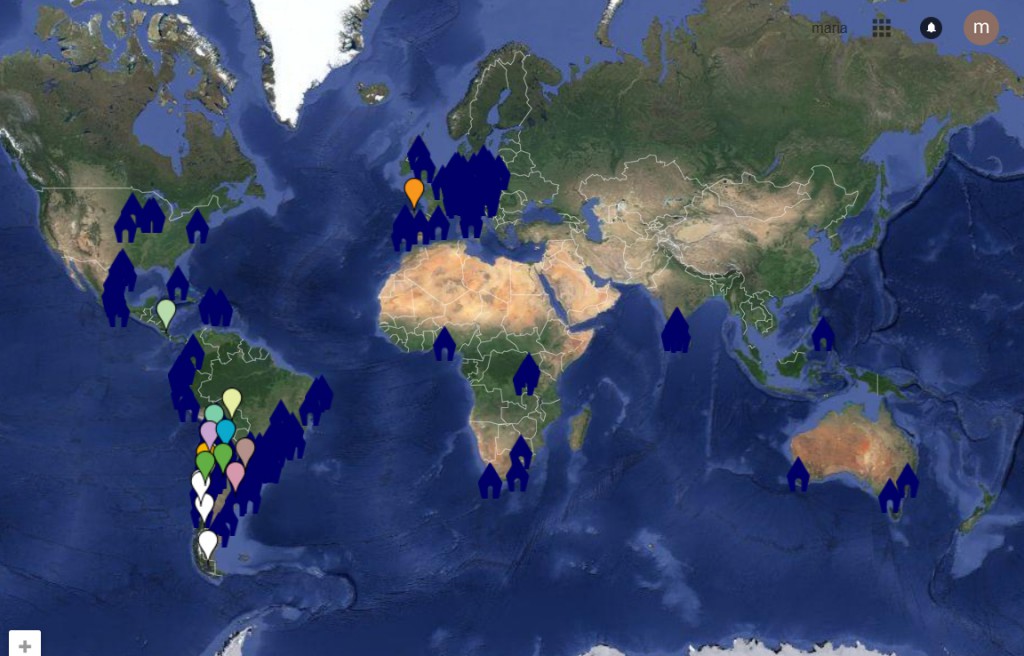 My shrine: the app 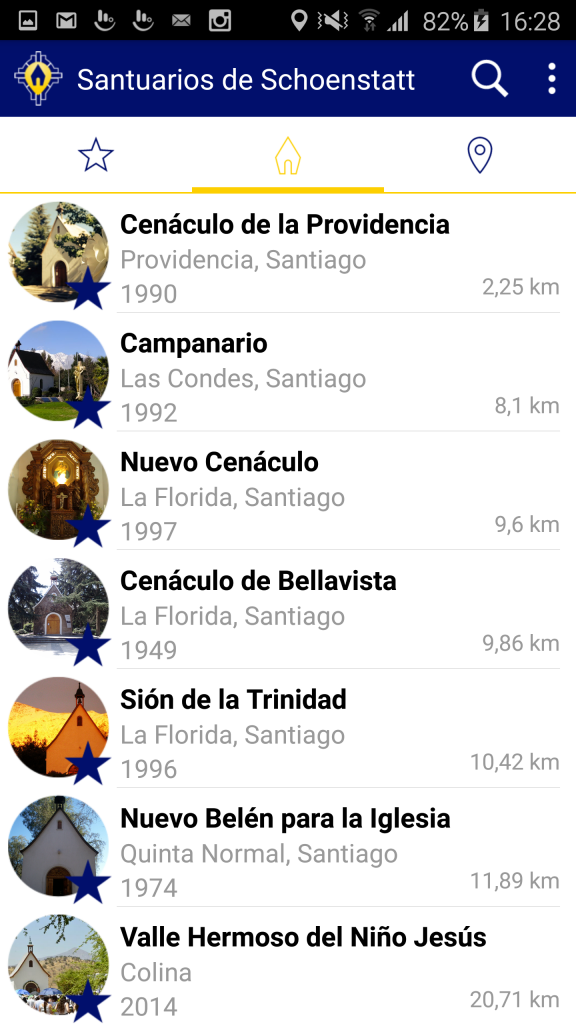 In December and thanks to Carmon Rogers, Alberto León — a university student at the Providencia Shrine in Chile and the founder of the of the Boys’ Youth in that city — contacted schoenstatt.org to communicate his new project: an app for the Schoenstatt shrines.

Before that, he had created an app called “Tu Misa” (your Mass) that takes the user to the closest parish and gives the Mass times, or the next Mass at a parish that is more or less the same distance. He thought that we needed something similar for Schoenstatt..and he got to work using the data verified by Matias Fortuño and Norbert Jehle.

Shall we put it into other languages? Of course!! Then we need translations…. “We will do it” and in a few hours, Alberto had the translations in Portuguese, English and German. We still need the Italian.

Shall we add photos of the shrines? A test with the photos of a few shrines and the decision was clear, of course, with photos! And they asked everyone to send the best photographs of their shrines.

Should we add the physical address or just the GPS coordinates? Yes, where we have these, we should also add the physical details for the shrines….which set off another call for collaboration, to the Dreamteam, the collaborators and friends of schoenstatt.org and the contacts of the two Chileans, Alberto and Matías. 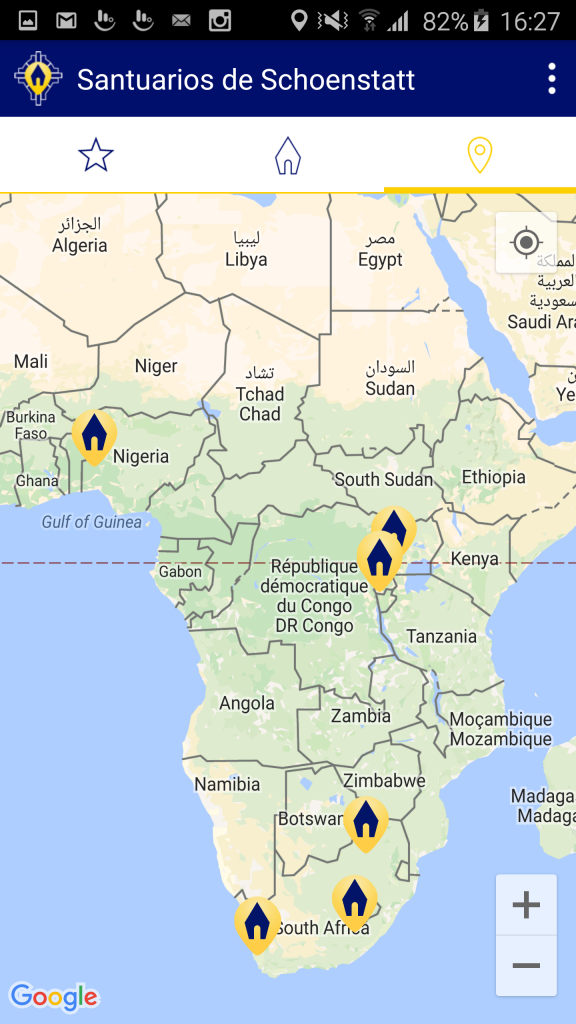 Of the 200 shrines, the GPS coordinates are still missing for the following:

For those who can help with the physical address (street, city) for the shrines in your country or others, please contact the same address to receive the information via Dropbox to fill out the form. The shrines from Chile, Germany, Switzerland, Austria, Spain and Italy are finished.

We are looking for photos

We already have many photos. Nevertheless, it is worth sending the newest photos of your shrines. Please send the best one of your shrine!

How will the App work? 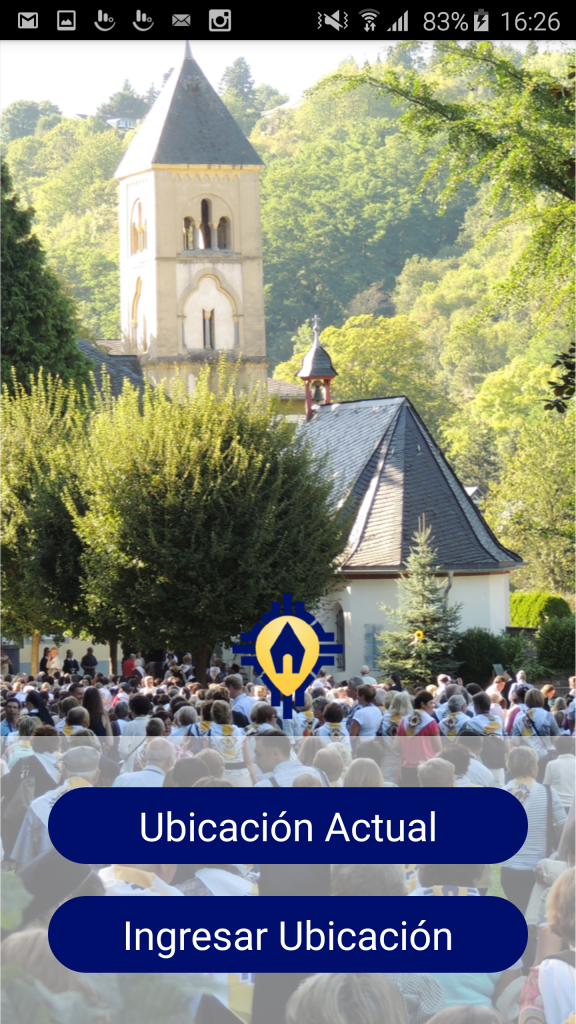 “The best part is that you can search for the shrine closest to your current location, together with the distance, photograph, address and everything,” explains Alberto.

This way one can easily find out how to arrive by car or walking, just like the “Mi Misa” App.

“In addition to this, one can explore the world of shrines in a country, a continent or one can literally go on pilgrimage from shrine to shrine from your cell phone,” he said.

Of course, we won’t stop getting questions about the shrines that still don’t exist, directions and photos, but the App will make the frustrating searches and being stranded in the main square of an unknown city a thing of the past…

Alberto is also thinking about putting together a website with the most important information….for times when you don’t have a cell phone handy.

And now the request, which is really an invitation:

Search for shrines that still haven’t been found!

Wait for the Shrine App and be part of its development!

The next idea has already sprung up…

To see if in the future we can geo-reference Fr. Kentenich’s life! What would this look like on a map?