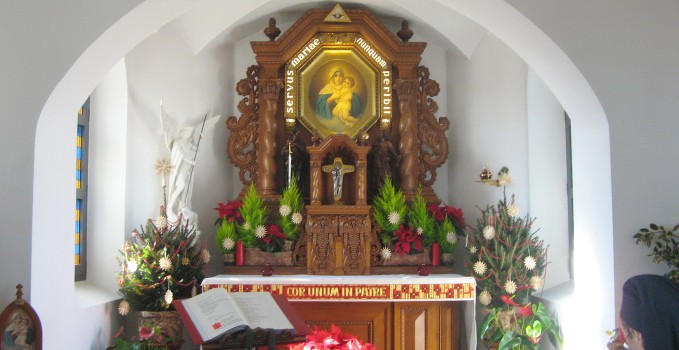 You Always Encourage Us, Give Good Ideas, Help us to Feel United Internationally and Give us Enthusiasm to Collaborate

“You always encourage us, give good ideas, help us to feel more united internationally and give us enthusiasm to collaborate!” A comment about the newsletter from Belmonte from Bellavista, Chile. “Not only the newsletter, but also Belmonte must do that”, remarked Martin Emge. Encourage, give good ideas, help Schoenstatters to feel united internationally, and give enthusiasm to collaborate. If the newsletter does us good, the conclusion must also be that many more Schoenstatters should come to enjoy it.

We have had this monthly newsletter from Belmonte since February 2015. It comes out in five languages (German, Spanish, English, Portuguese and Italian), and at the moment reaches 403 in German, 37 in English, 29 in Italian, 86 in Portuguese and 261 in Spanish. It is an exclusive and handpicked circle of readers. “An infinitesimally small group”, Fr Kentenich would say. More about that later.

Reports on life around “the shrine of all of us” in Rome, as well as successful initiatives and projects could motivate us to make Fr Kentenich’s dream of an international Schoenstatt Centre in the heart of the Church our own. At the same time, via the newsletter initiatives are channelled and emphases targeted.

If you don’t yet get the newsletter, you are warmly invited to subscribe to it, pass it on and gain new subscribers. If Belmonte had a few thousand subscribers to its newsletter, it would have a completely different presence and impact on Schoenstatt and beyond.

Samples from the first newsletter of 2016 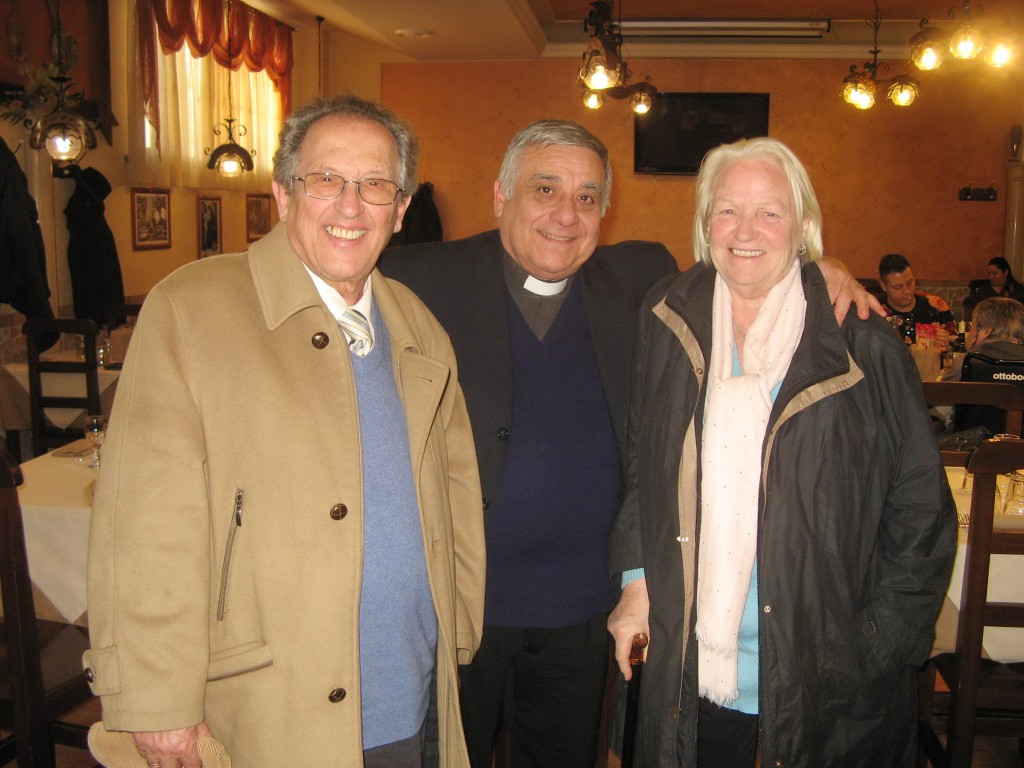 For three years, from 2006-2009, Anneliese and Francisco Nuño, Madrid, who are members of the Institute of Schoenstatt Families, worked here for Belmonte. Much of the furniture to be found today in the Casa del’Alleanza comes from them. Also the “Notes from Rome”, which Francisco Nuño published regularly on schoenstatt.org have exerted a permanent influence. During the Christmas period they again visited Belmonte. “We are greatly interested in Belmonte”, Francisco Nuño said. “We are under the impression that our Schoenstatt Family is still far from seeing Belmonte as our common concern and how essential it is to us all.”

Australia: A door and a window

Julie D and her husband visited Belmonte in 2000 while they were on pilgrimage from Australia to Rome and Schoenstatt. “There was nothing there except a wilderness and a wayside shrine.” Now Julie has donated a door and window close to the Australian room in remembrance of her husband who died in 2010. “He was a man with vision, so something in Belmonte should remind us of him, because Belmonte is a great vision.”

Next edition of Belmonte pasta

They’re gone! Sold and eaten: the “Pasta di Belmonte”, the colourful noodles shaped like St Peter’s with the shrine, which make such a good present. They have been re-ordered, but the company can only deliver them at the end of February. Advance orders will be taken. However, if you would prefer to start with the Belmonte tomatoes, there are still some left. Besides, you can buy coupons (for 10 packets or more) for the Belmonte pasta to make certain you will get some before they are sold out again!

Warm thanks from Bellavista for the newsletters! You always encourage us, offer good ideas, help us to feel more united internationally, and give us the enthusiasm to co-operate!

Have they deserved that?

You always encourage us, offer good ideas, help us to feel more united internationally, and give us the enthusiasm to co-operate! Have some priests I know deserved that? Yes, Martin Emge of the Bamberg Diocese in Germany, remarked, and began to advertise the newsletter. Have the Federation Families in our course deserved that? Yes, replied Mr & Mrs Rubio from Madrid, and invited …

That was learned from no one else than Fr Kentenich – and his idea will soon be a hundred years old!

“You agree with me in this, also because you accept and are convinced that the spirituality we are aiming at in our Sodality is the right one to reconcile our ancient faith with the modern soul – without making feeble concessions – and re-cast the life and cultural values of our holy religion. You will also admit that as instruments in the hand of our heavenly Mother, all of us Sodalists together – admittedly a microscopic little group when compared with the apostles of disbelief and immorality – can nevertheless do something, if each of us does all in his power wherever he is, and, through organized striving for a common goal, sees to it that despite all difficulties the good will continue to generate good.”[1]

“A microscopic little group” for a gigantic task. Most of us know how the letter continued. Fr Kentenich developed a plan, …” an idea that is too comprehensive for us to consider carrying out immediately … Dreams! Of course! But if they become a reality one day, it will need a lifetime to carry them out prudently, purposefully and organizationally. “ It meant the incorporation of the idea of the Apostolic World Confederation into Schoenstatt’s configuration and goal. “Dreams! Of course!” Of course, the microscopic little group, some of whom were still in danger of dying on the battlefields, were to gather the educated youth of the world around themselves – a distant, unattainable future? Dreams?

A microscopic little group for a gigantic task. Yet they were not to resign themselves, but to draw the conclusion: Each has to do what he can. That is a little Pentecost: the gigantic task does not discourage, but must become an incentive: the tiny group has simply to grow, we have to attract many.

The microscopic little group has to grow. Otherwise the vision can never become a reality! Fr Kentenich showed the way it can quite simply begin.

He wrote to Josef Fischer:

“… through the way things are developing our Mother requires us for the moment to advertise our publications quietly and prudently. If we …”

that is, each of us – at that time the fifty or so Sodalists in the army – “until Autumn” – a definite time span!

“I will be satisfied if we have won over one or the other (subscriber) by autumn.”

That is what he wrote to Josef Fischer on 22 May, and on 16 August he was able to inform him, “Hafeneth has personally found ten or twelve subscribers.”

If until autumn we have won over one or the other, we will be satisfied! Martin Emge (Hafeneth 2016?) has personally found four subscribers. The Rubio in Madrid five. Who will be Hafeneth 2016?

“Hafeneth 2016” will be given a Belmonte voucher for three nights plus a surprise! 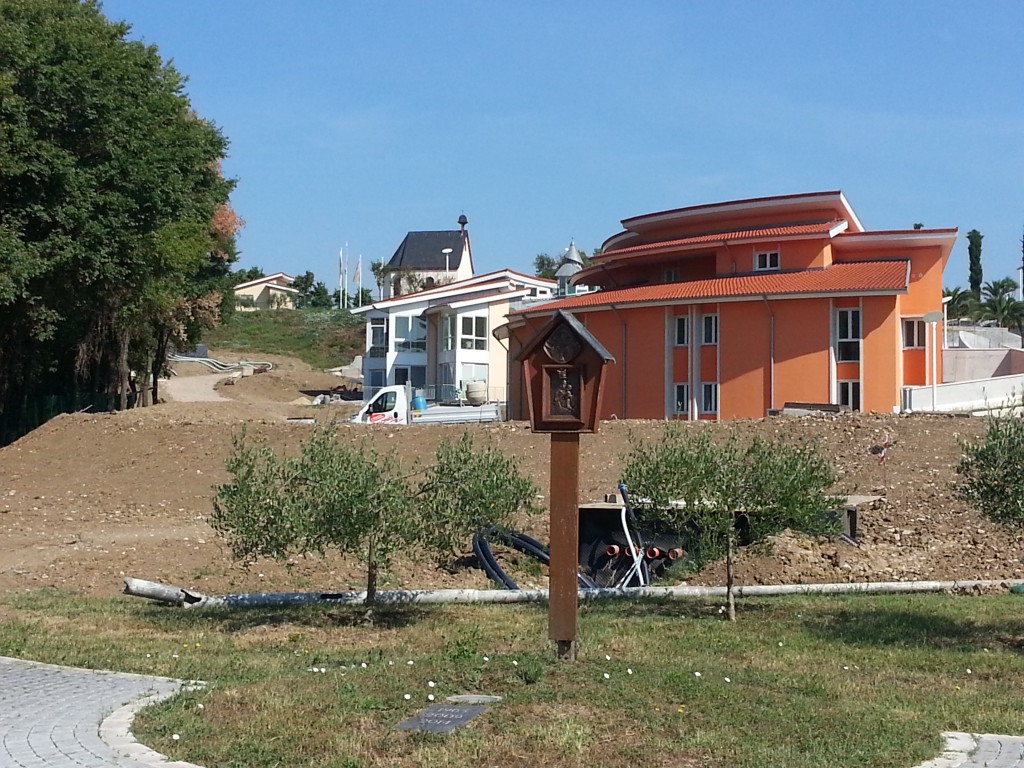