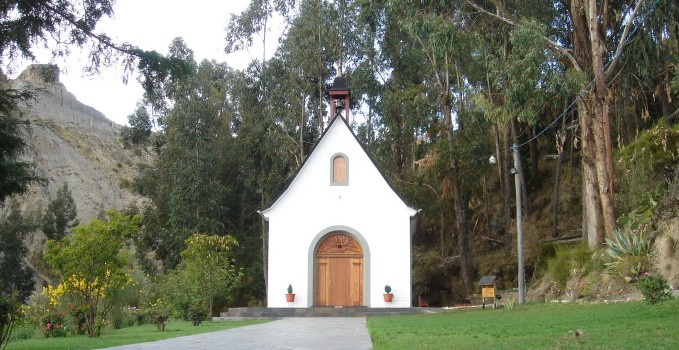 On the eve of the opening of the Holy Door

La Paz, Achumani, 21 November 2015. Today, twenty-three years ago or more precisely 8,400 days ago, our Achumani Shrine was blessed during a solemn celebration.

On the afternoon of another anniversary of the blessing of the Shrine, sixteen couples sealed their Covenant of Love with the Mother Thrice Admirable, Queen and Victress of Schoenstatt in a grace-filled ceremony.

I recall a funny story in which St. Peter is very concerned upon noticing the presence of some souls, who he did not remember allowing into heaven. He began to investigate and he finds a rosary hanging from a small hole in one of the clouds, and he sees many people entering through this hole. The rosary served as a ladder to heaven! He goes to tell the Lord. Jesus listens attentively to St. Peter and he smiles saying: Don’t worry Peter…that’s Mother’s doing.

And again sometime ago, there was a cartoon depicting St. Peter conversing with Jesus; a rosary behind them was extended like a rope towards the earth and a long-line of faithful climbed to heaven through this rosary, and in the caption Jesus is saying to St. Peter: “Look at that, that’s one of Mother’s doings.”

During this year that the Holy Spirit inspired Pope Francis to proclaim as an Extraordinary Year of Mercy, beginning on 8 December, the Solemnity of the Immaculate Conception, the Holy Door of St. Peter’s was opened. Then on the third Sunday of Advent, the Holy Door at St. John Lateran, the Cathedral of Rome will be opened. Henceforth, the Holy Doors of other Papal Basilicas and of every Cathedral including that of Our Lady of Peace and of Irpavi will be opened. It is very probable that the Achumani Shrine will also be a jubilee shrine, and its door will be a Door of Mercy.

Let us pray God’s will be done in these sixteen couples.