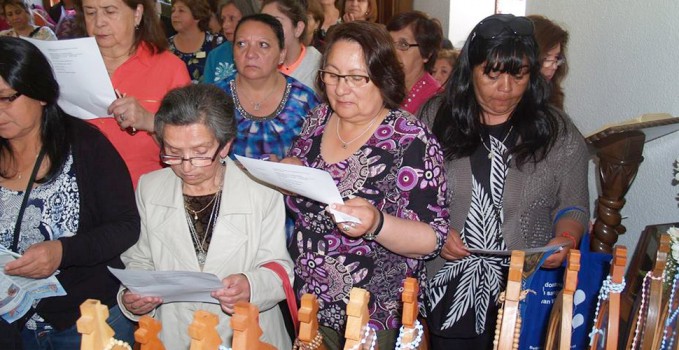 Gathering of pilgrims at Montahue

Every year, pilgrims’ day at Montahue is truly a celebration of love, faith and joy. It is a year after a year homecoming to encounter the Mother and Queen who waits at the Shrine for the return of all those who welcome her in their homes and who were blessed by her visit. 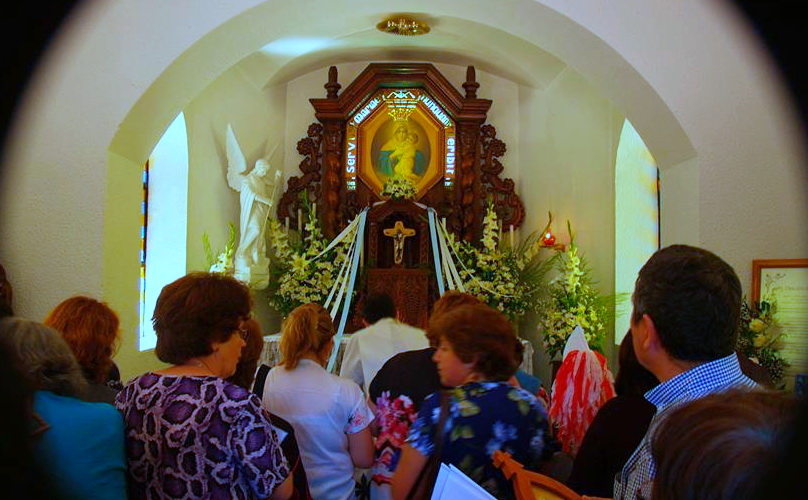 On Saturday, 28 November at 10:30 a.m., the first groups began to arrive. I have to greet them one by one, or they would not forgive me if I only waved my hand and tried to walk on, they would catch up with me anyway to give me a kiss. Six hundred, seven hundred, a thousand, or however many, no one would forgive me.

– “I have not greeted you, Sister,” even if I had waved and said a few words from a distance. No. Each person, men and women, believes they are the only one, and if I say their name, that person truly feels that they have come home. Here they know me, accept me, and they wait for me. And the buses came from Tomé, Cabrero, Coronel, Talcahuano, Concepción, Los Álamos, Antihuala, Coelemu, etc. A man followed me as I moved through the crowd greeting each one, until at last, I saw him and asked him if there was something he needed, so that I could take care of him.

– “No, Sister, I am impressed by your capacity. Do you really know all these people?”

“Of course, sir. You, for example, this is the first time that you have come, I have not seen you before, and I immediately greeted Jeannette de Coelemu by name, Noelia de Cañet and so forth.” The man was impressed. He was from Coelemu and in effect, he had come for the first time. When he approached to bid me farewell I told him:

“Mr. Sergio, I hope that this has been a beautiful experience for you.”

“Sister, you remembered my name with so many people during the day?”

“Of course, you see I help the Blessed Mother here, and she knows the names of all her children”…and to my surprise, the man was visibly touched. 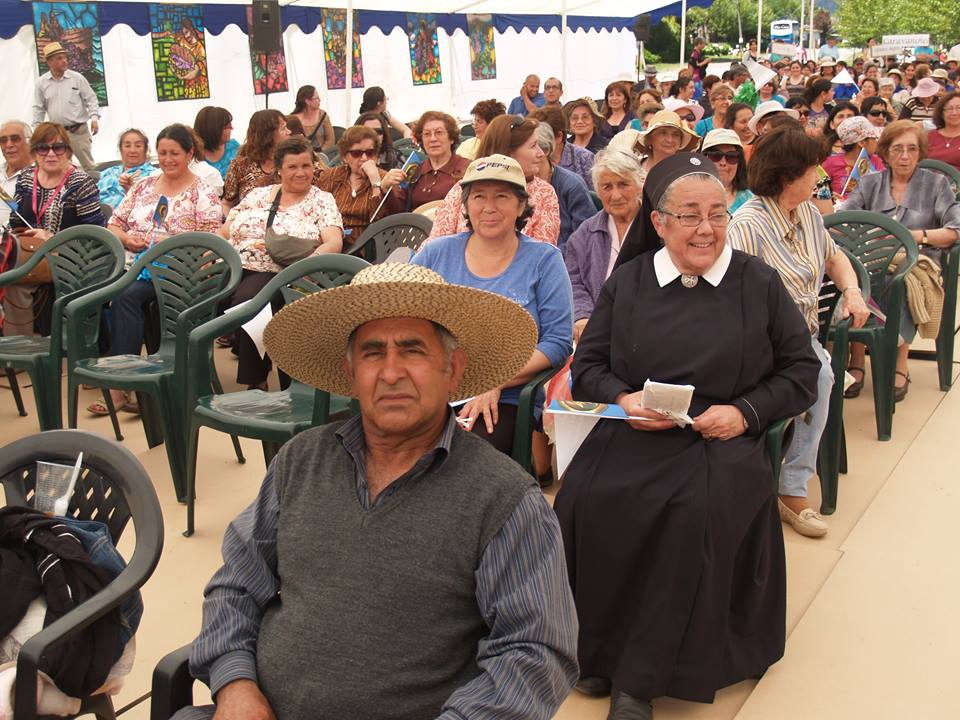 There were no less than six buses from Coelemu. They are an extraordinary people. There were 200 people and I received 200 messages from each one who said the same thing, as if he/she was the only one responsible to tell me– that “the pastor sent his greetings.” He sent them forth before they departed, and he told them to give me a special greeting, because I was his friend. So, when they departed, I told them that they had to tell him 200 times that I also send my greetings. In addition, I sent him a gift of a small advent wreath.

The Blessed Mother received thirty covenants of love and fifteen missionary commissions. At the end of the Eucharist, they were introduced before the large assembly as a testimony so that others would become enthused. In some places, there are already candidates for March.

But, what touched me the most was to see many elderly people participating in the procession, which lasted a little more than half an hour, walking through El Recodo, the highway and entering through the alley until they reached the tent once again. Some had one or two crutches, and many were very elderly beneath the strong sun while others barely were walking, and yet, they did not pause a single moment; some were even pushing their relatives wheelchairs. I especially obtained a wheelchair for this gathering so that a missionary from Cañete, who no longer leaves her home, could come. On my last trip, I encouraged her and I promised her the wheelchair when they arrived in Montahue. She was so happy that she said she would arrange with the pastor so that she could work again like before.

On this occasion, there were a little more than 900 pilgrims. Attendance had declined because there were many parallel activities in the diocese and in the province in general. However entire towns were missing: Lebu, Arauco, Lota, Santa Juana, Curanilahue, mainly because of the lack of time and of collaborators for the ministry during the year. However, those who came were very happy, especially those who came for the first time. 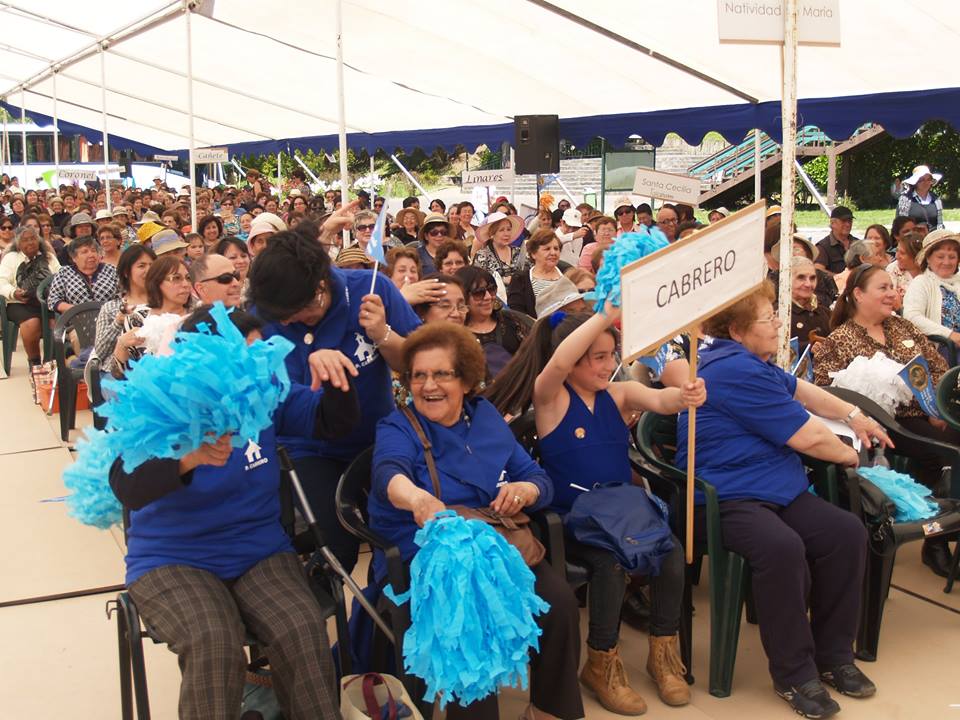 They continue to go on pilgrimage

“The Blessed Mother remains loyal…She is the Virgo fidelis. She always loves us. She remains loyal and loyalty only ends when she knows we are in heaven…” (J.K.)

Sometimes I imagine myself on the last day, sorting out the Father’s mercy at the entrance of heaven, camouflaged in the midst of all those simple people who will enter paradise like an avalanche because of their childlike faith and their abandonment. It is impressive how these people live under the protection of divine providence; invalids who are convinced that their sacrifice to walk will please the Mother and she will look at her children, who have left the faith, at others, the terminally ill in body or soul. Moreover they, like true lightning rods, go on pilgrimage unceasingly, year after year, to the Blessed Mother’s place of grace. More and more are elderly, lame, visually impaired, but aware that they have no other treasure to offer than their own misery that they do not even hide from the eyes of the others, because we are all the same at this holy place. It is truly touching.

Mary is the Great Missionary, who, from her throne of graces, extends her mantle to cover us with her mercy while we go on pilgrimage through this valley of tears towards eternal happiness.

First of all, I want to express my sincere gratitude to God and the Blessed Mother for giving us a beautiful, sunny day, and to the many volunteers of the Schoenstatt Family from Montahue, who served joyfully and with great willingness at every point of the gathering living Schoenstatt’s reaching out in their own home. 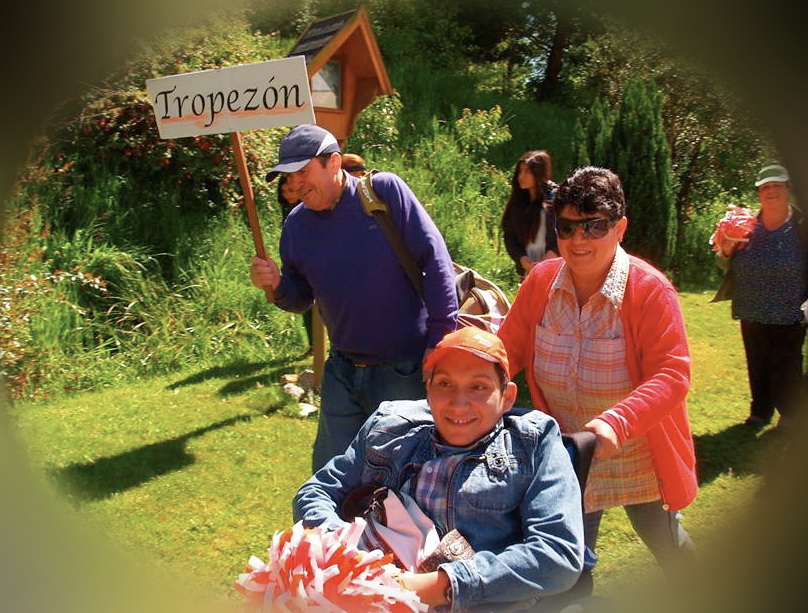