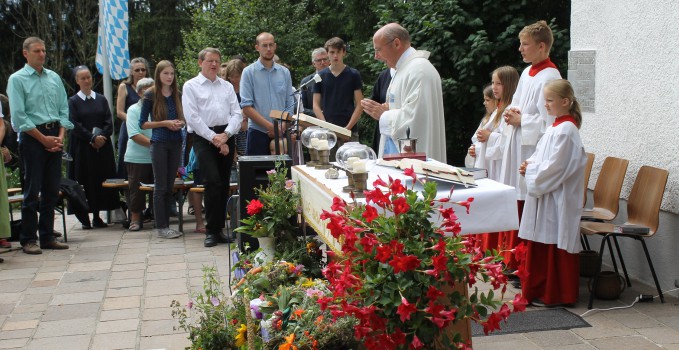 Sister Ingrid-Maria did not stop looking at the weather forecast until the beginning of the celebration. Very heavy rains were forecast for that Sunday morning. With confidence and ignoring this gloomy prediction of rainy grey clouds, she allowed the benches to be set up in front of the Shrine for Holy Mass.

The Solemnity of the Assumption of Mary into heaven: a celebration in Schoenstatt on the Mount in Memhölz that is traditionally attended by the church choir and many visitors from surrounding areas, who enhance this celebration with their typical costumes and the large and colorful bouquets of wild herbs. In Bavaria, it is a holiday during the midst of vacation and so in the middle of August, people joyfully celebrate this feast of the Blessed Mother. On this 15 August, there were not only participants from the surrounding areas at Holy Mass, but there were also families from Austria who were the “vanguard” of the retreat of Schoenstatt families from Austria. In addition, there were members of the Schoenstatt Movement from the diocese and beyond, and there were also assistants and volunteers from Spain and Argentina. María Quiroga from Argentina, who has worked together in Memhölz for a month, was perhaps to blame for the clouds, since it never rains in San Juan where she lives, and she celebrated each drop of rain that had fallen on the previous days…

A special visitor was expected for this festive Mass– Pastor, Rev. Dr. Ulrich Lindl, from Biberbach, in charge of the Department for Religious Life in the Episcopate of Augsburg, who has always advocated for the Memhölz Schoenstatt Center, was now going visit it for the first time. At the end of the Mass, he stressed this was not his first direct contact with the Blessed Mother of Schoenstatt, since the Pilgrim MTA has also visited him since he has been pastor in Biberbach. 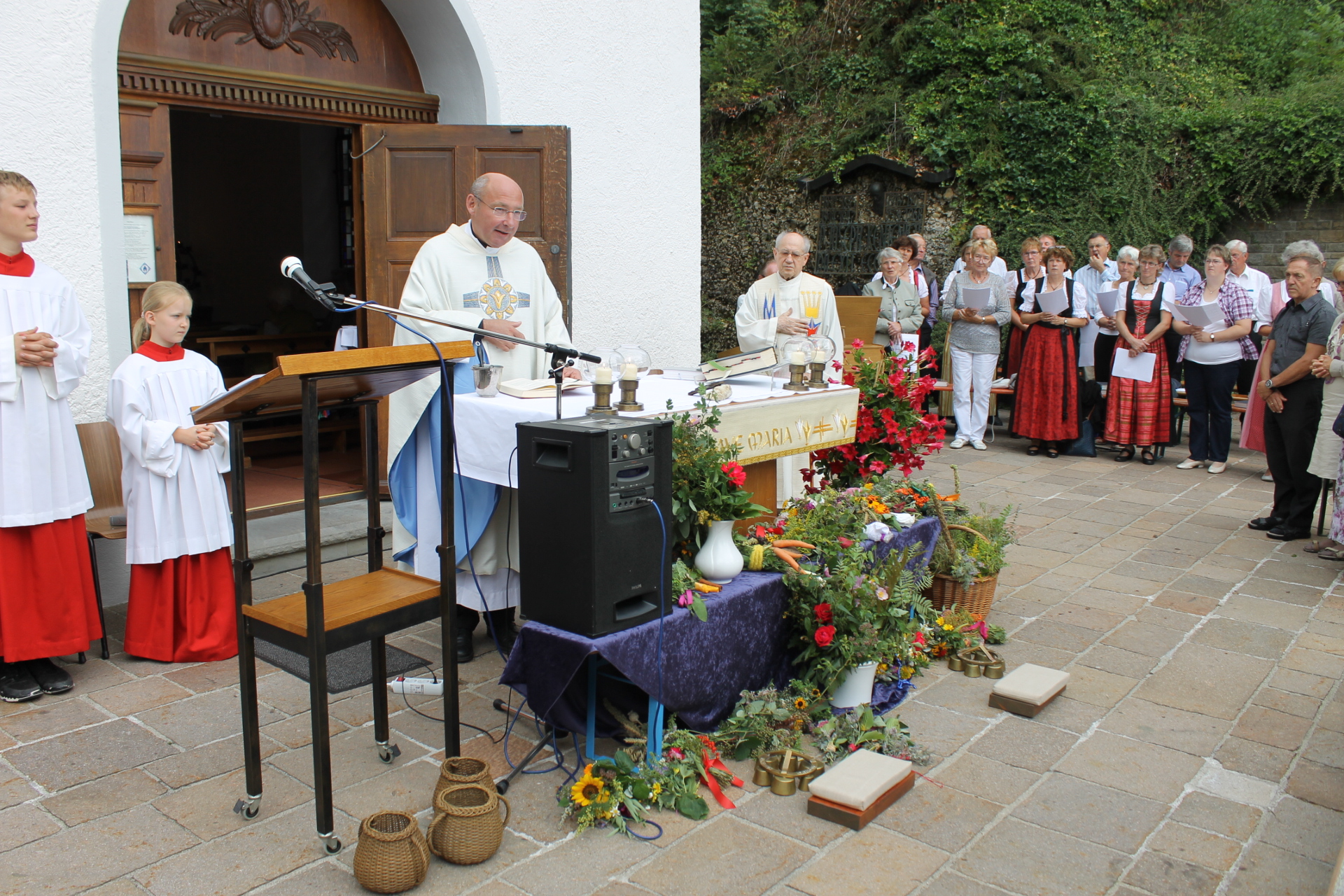 “A summit with God”

In his greeting at the beginning of Holy Mass, he said that he was very happy to be present at Schoenstatt on the Mount, in this “summit” with God, celebrating Holy Mass. Giving the example of a “last minute trip” to Australia without knowing English or the country, he asked how we planned our one and true trip around the world, the trip to heaven? Was it like a last minute trip or one that was well prepared with the question: Where am I going, what do I take with me, and what – or better yet –who waits for me there? Fr. Lindl said that the question about heaven is easy for children: Up there! And for many children it is not difficult to imagine heaven. And if one asked them, who is in heaven, they will quickly respond: God.

And that is correct, God is in heaven. Thus, it is valid to say: Heaven is where God is. Heaven is not only a place; it is an encounter with God. “Heaven as a culture of encounter with God,” one the participants whispered. “And that is Covenant Culture,” was the response. How appropriate that Fr. Lindl would receive the gift of the book about the audience of the Schoenstatt Movement with Pope Francis at the end of the Mass that bears this exact title!

In his homily, Fr. Lindl said that heaven is an encounter; it is an experience. And time and again, God gives us heavenly moments, moments of justice, peace and joy as a sign of God’s active presence and as an anticipation of heaven. God gives us these moments to make us enthusiastic about heaven, to make us enthusiastic for peace, joy and justice.

Mary lived her heavenly moment at the moment of the Annunciation, when she received the call to bring God to the world. This celebration of Mary’s “return from the world” to heaven shows us that God takes the body and soul seriously, and that at the end, in the consummation, he wants to see us redeemed, redeemed in body and soul: “He wants us complete once again.” 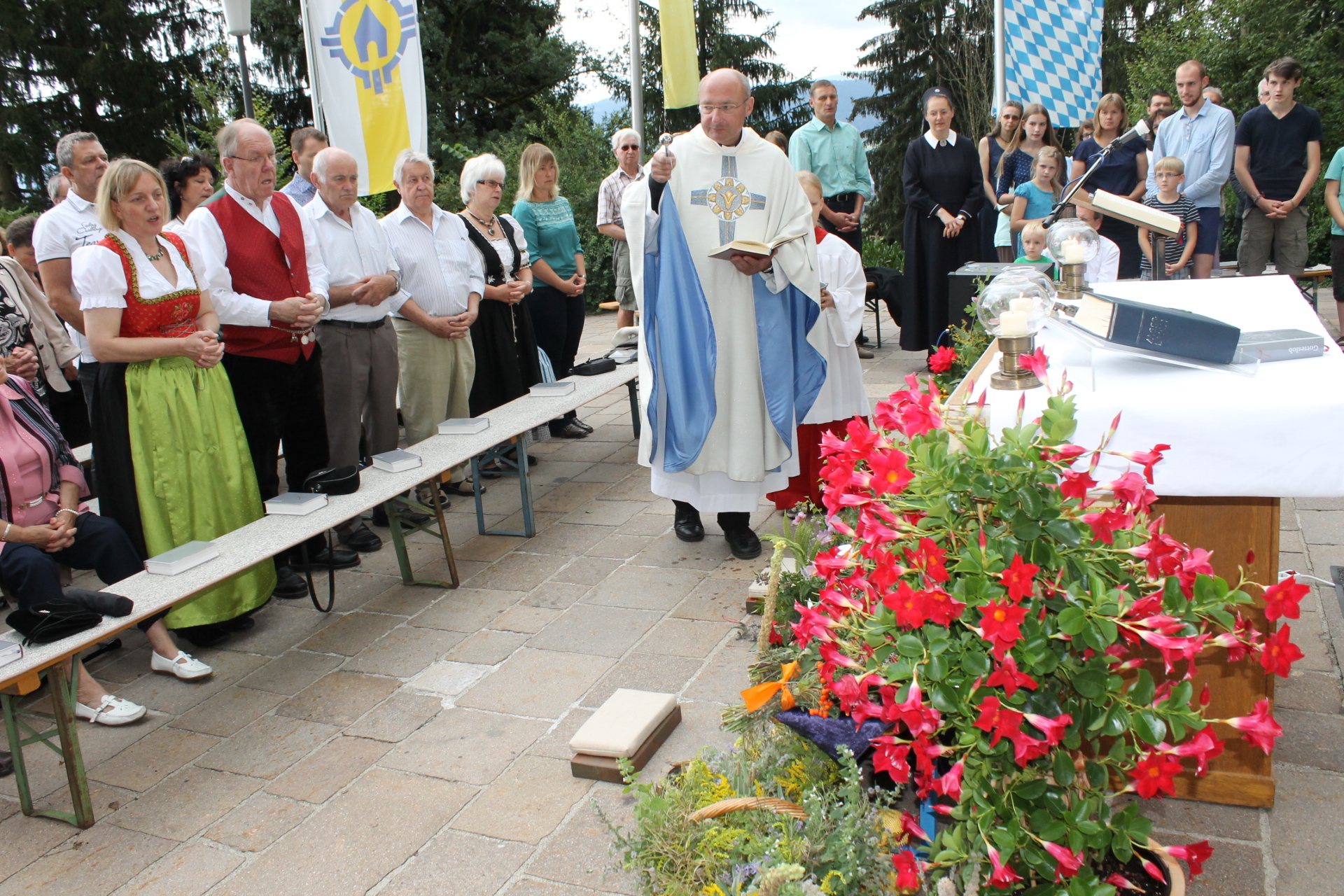 Blessing of the herbs

At the end of the Mass, the bouquets of colorful herbs that were in front of the altar were blessed with great devotion. And these were the only drops of water that fell on the faithful, despite the black clouds. Furthermore this was despite what happened the previous Saturday in some parts of southern Germany, when more rain fell than normally falls throughout the entire month of August…

Immediately after Holy Mass, Fr. Lindl had to depart for his next appointment. After a cordial farewell, the rest of the visitors were not in a hurry to leave: some remained in the shrine, others visited, others remained for a long time close to Father Kentenich’s statue, or they stopped to look at the new religious store. 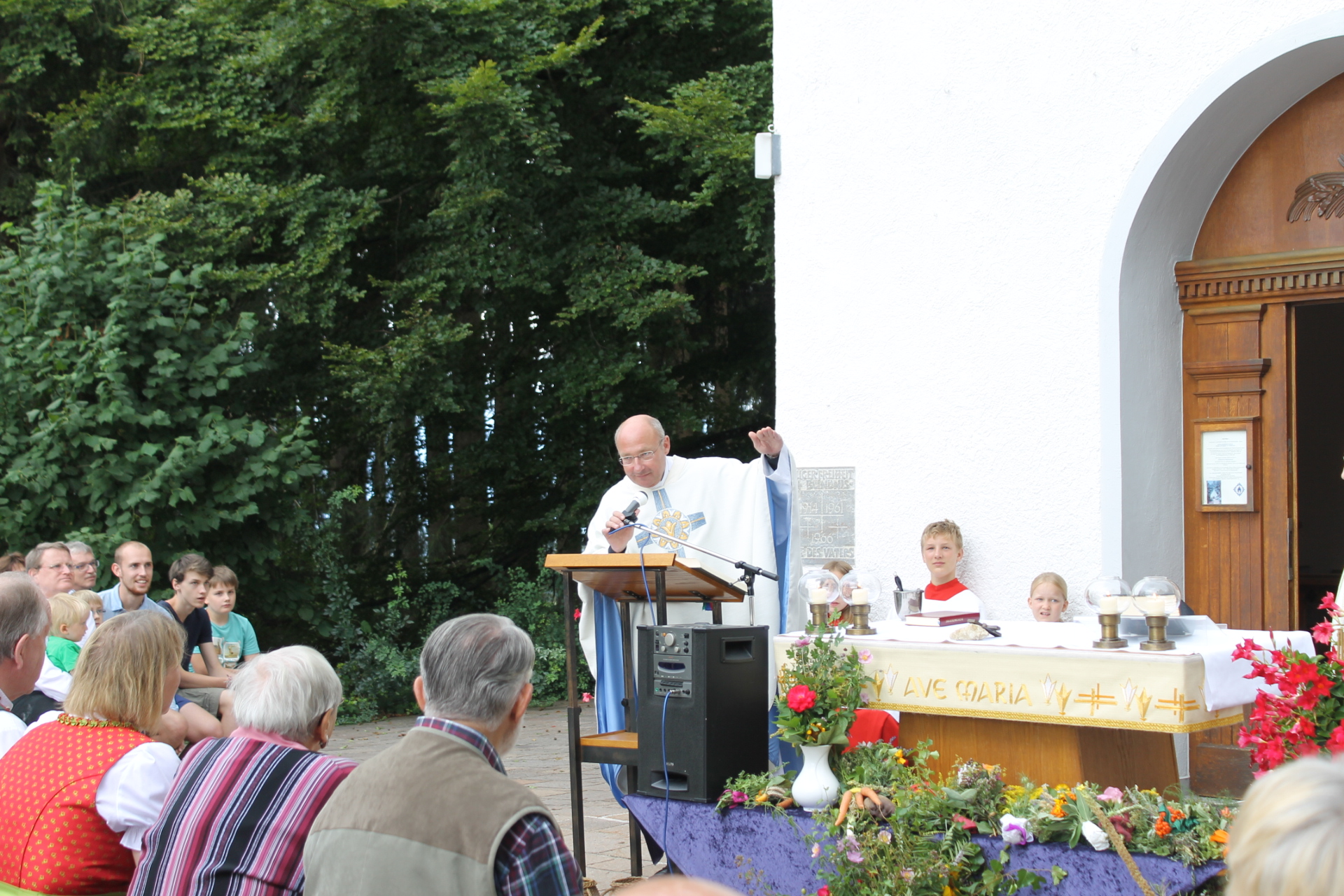