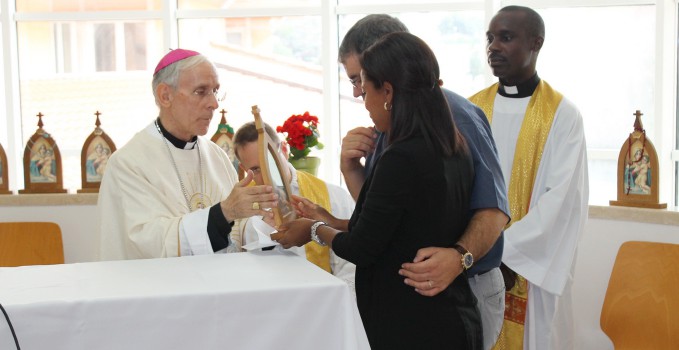 “It is not ‘Belmonte’; it is ‘Bellisimo Monte!`” National Encounter of the Schoenstatt Movement in Italy

“It is not ‘Belmonte’, it is ‘Bellissimo Monte'”, Fr. João José from Angola said smiling. He learned about Schoenstatt when he studied German at the Kreuzberg Institute in Bonn and when he returned to Rome – where he studied Church history at the request of his bishop – he contacted Belmonte to offer his priestly service and become more attached with Schoenstatt in Rome. On September 6, he participated in the national encounter of the Schoenstatt Movement in Italy at Belmonte. Like every year, the Italian Movement that grew from the blessing of the Matri Ecclesiae Shrine gathered on the first Sunday of September to celebrate another anniversary of the Shrine, which received its name from a Pilgrim Mother missionary from Argentina on the day of its blessing: The shrine of all of us and which has resounded throughout the world since then. “I felt like a pilgrim the whole day”, added the young priest from Angola, “like a pilgrim among the pilgrims of the entire world.”

There were priests from Argentina, Germany, South Africa, Italy and Angola, Sisters of Mary from Argentina, Brazil, Spain and Germany, pilgrims from Rome, Lazio, Puglia, Tuscany and other areas of Italy, and people from Uruguay and Brazil in Belmonte, ‘Bellisimo Monte’,  the “most Beautiful Mountain” on the day that marked the beginning of the Movement’s activities after the summer vacation. “I returned to Belmonte today after many years”, commented Fr. Simon Donnelly from South Africa, who has been working in the Vatican Secretariat of State for two years. “It was a very gratifying day. Belmonte has developed very much, I still remember the day of the blessing of this Shrine, there was nothing, just the Shrine!” He added, it was also “a surprise to see so many ‘colleagues’ from the Vatican”: He knows Sr. Mary Thomasine Treese and Sr. M. Elizabet Parodi (who both work in the Congregation for the Cause of the Saints) and Dr. Pamela Fabiano, who is also at the service of the Holy Father. “It is a place of encounter at the center of the Church”. Truly at the center of the Church, she commented: “I was impressed how Archbishop Ignazio Sanna and Fr. Daniel Lozano transmitted the fundamental subjects of the Holy Year of Mercy to the people in their conferences and the homily”. 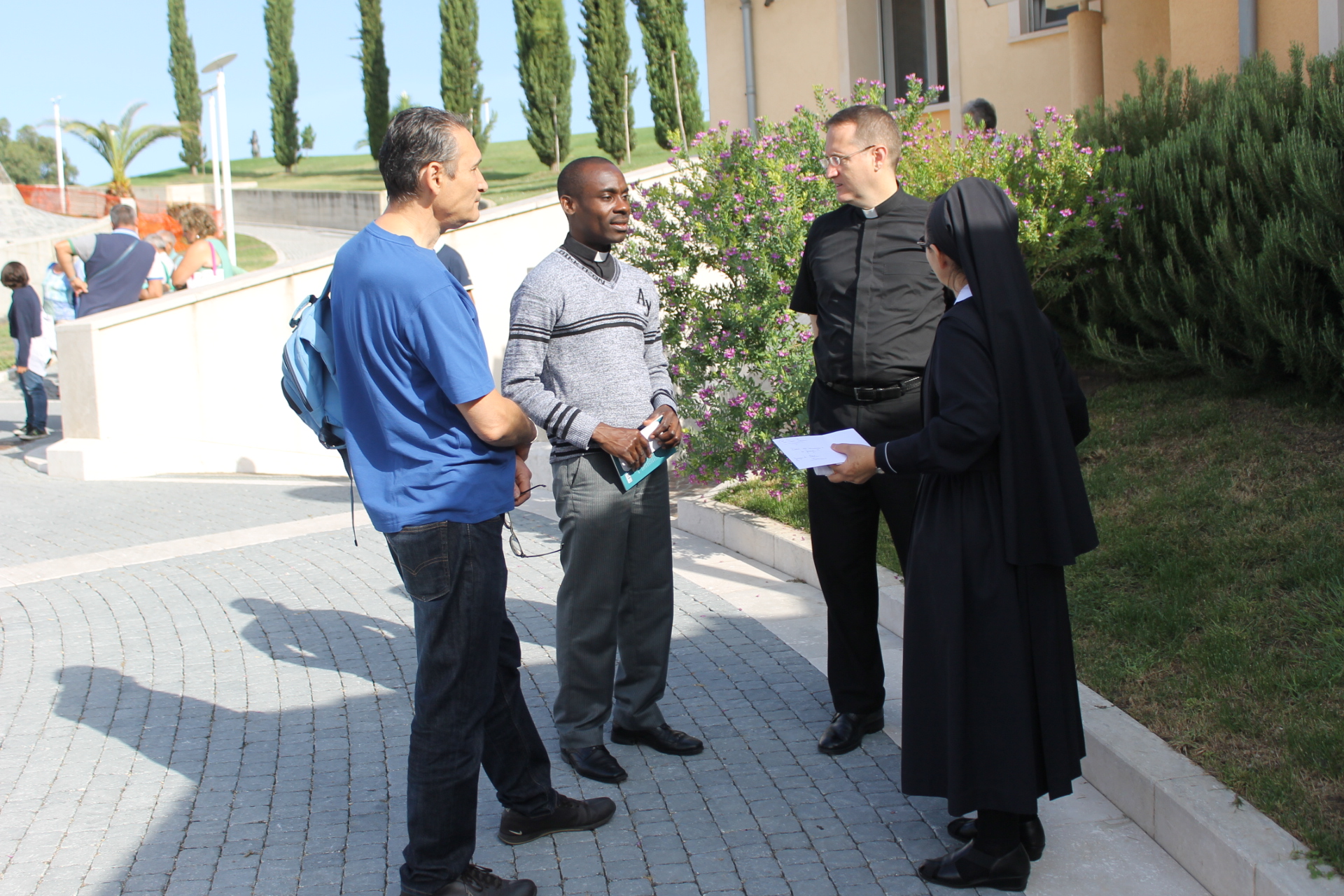 It was the first meeting after the long summer vacation; it was noticeable how they joyfully greeted each other, exchanged news. They were happy to see the Brazilian Sisters of Mary and the rector, Fr. Daniel Lozano, after they returned from their vacations in their countries of origin: Brazil and Argentina respectively. Fr. Juan José Riba, Director of the Movement did not return and some other Schoenstatt Fathers were not able to attend, so it fell to the moderator Davide Russo to Fr. Juan José’s greeting, in which he sent his best wishes to the Movement and he explained that he had to remain in Argentina because of health reasons.

A repository was set up in a corner of the lobby to the Father Kentenich House, in another corner, Benedicta Schwering offered books in Italian: Fr. Carlos Padilla’s “One Hundred Years Journey, A View of Schoenstatt”, “In the Footsteps of Father Kentenich in Rome” by Monsignor Peter Wolf, …and the book containing Pope Francis’ message to the Schoenstatt Apostolic Movement was already sold out. It’s too bad, because a lot of people want it! Perhaps more books will arrive soon “for the 25th anniversary of the Sisters’ Shrine”. Moreover, Benedicta offers several brochures about Belmonte, and at the end of the day she presented the rector with the first donation for the Italian room (or better still: rooms): almost 200 Euros. A great accomplishment! 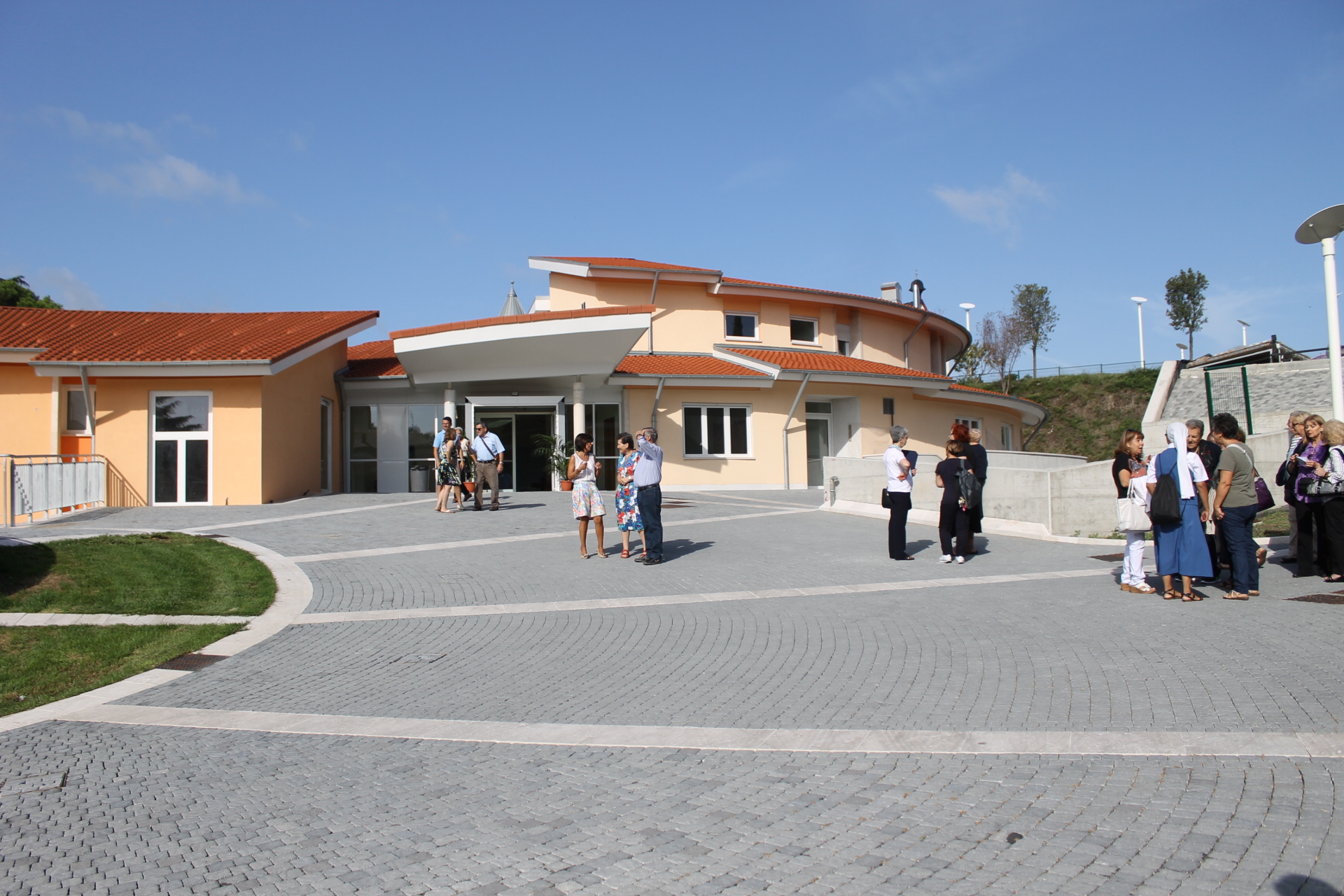 How to live mercy?

In his conference, the Archbishop of Oristano, Ignazio Sanna, a member of the Schoenstatt Institute of Diocesan Priests, spoke about how to live mercy, always referring to Pope Francis’ Bull of Indiction of the Extraordinary Jubilee of Mercy. It is necessary to feel forgiven, to practice mercy and justice. According to Bishop Sanna, the best places to experience and to give mercy are in one’s own heart, the family (which is the place where one learns to reconcile, to forgive and to walk with Jesus), the Church community and the shrines. He recalled that Pope Francis has said that all the chapels of the jails will be shrines during this Holy Year, and that the cell doors could be “Holy Doors” where forgiveness and God’s infinite mercy are found. Later, the many examples he presented in his conference became topics for discussion together with Fr. Daniel Lozano’s conference, in which he showed that the three graces of the Schoenstatt Shrine are central to mercy. 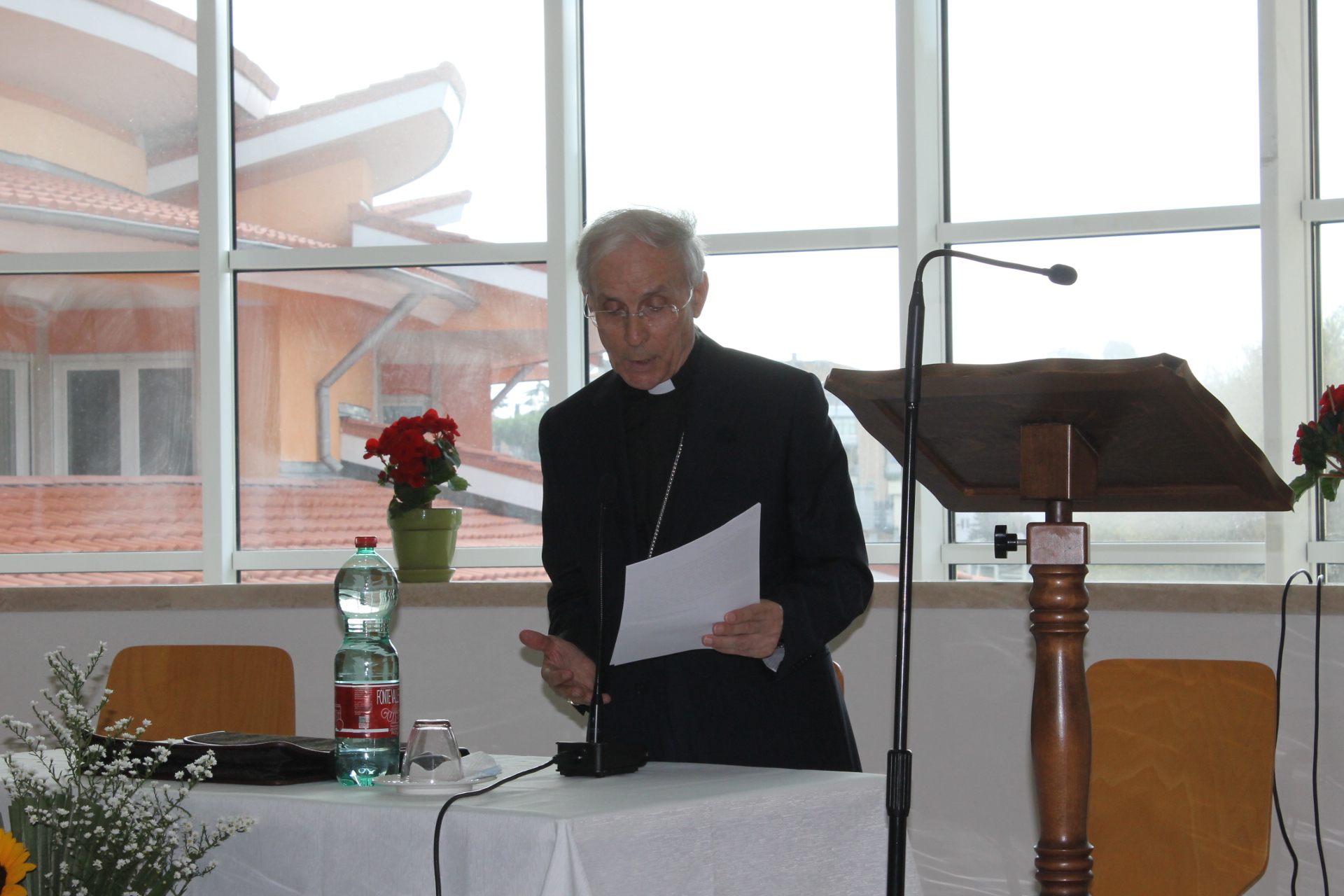 A meditated Rosary on pilgrimage through the grounds of Belmonte

After lunch at a nearby restaurant, the rosary was prayed by making a pilgrimage through the grounds. The Auxiliary Pilgrim Mother from Italy headed the procession and was carried from station to station by two men.

The procession ended in front of Fr. Kentenich’s statue, and from there with the Auxiliary always in front, they marched to the hall of the Father Kentenich House. The elderly and those, who could not participate in the pilgrimage because of the heat, accompanied the prayers from there. 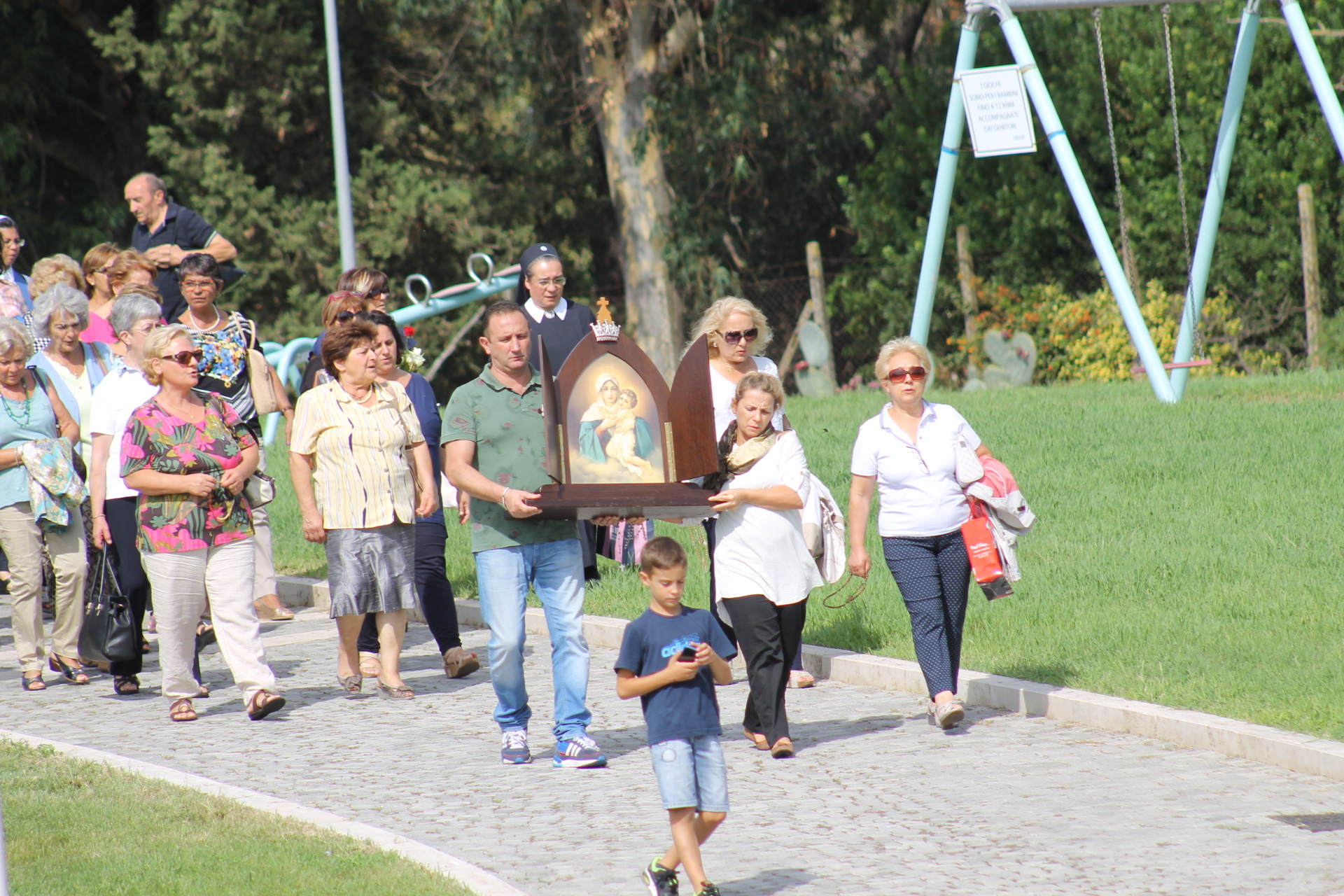 The day ended with Holy Mass, celebrated by Bishop Sanna. “Although it was a little sad to hold the first national meeting without a single Schoenstatt Father” – they are committed to the tasks in their parish – “it was beautiful to celebrate the Eucharist with so many priests”, a participant from Tuscany commented. Five priests con-celebrated: two from Africa, two from Europe and one from South America. It was truly a Schoenstatt international center in Rome! 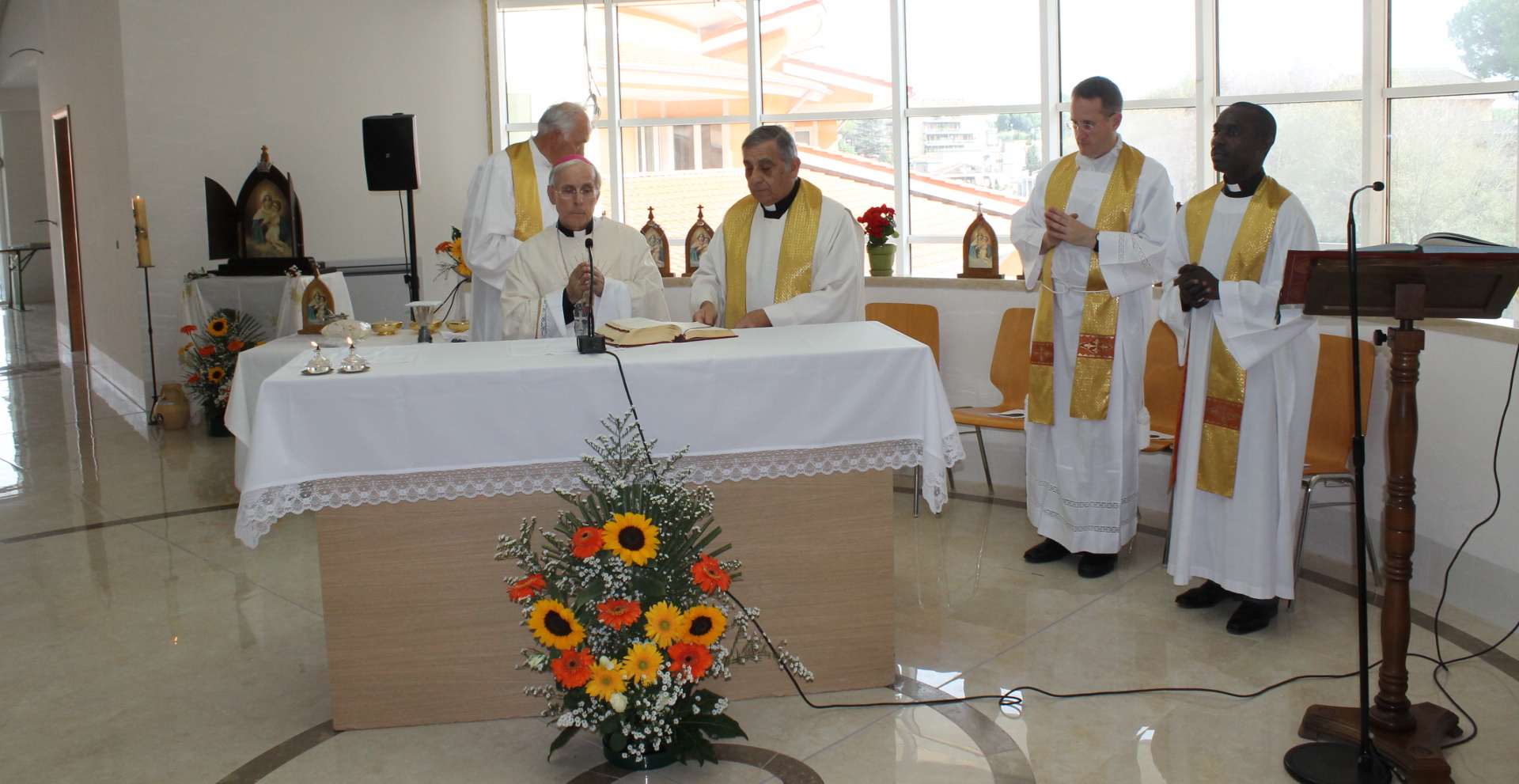 Before the final blessing and the sending out, there was a very special moment. A young couple was commissioned as missionaries for the Pilgrim Mother Campaign. They both prayed the prayer of missionary commitment, offering to be the Pilgrim Mother’s hands and feet to take her where she wants to go, along with Jesus, Her Son. The words: “She is the great missionary, She will work miracles,” which are expressed by missionaries throughout the world, resounded. They received the Pilgrim Mother; they embraced and kissed her…

“Angola needs missionaries like them”, Fr. João José said. Angola, Italy, the entire world needs them, to announce mercy from the Shrine. 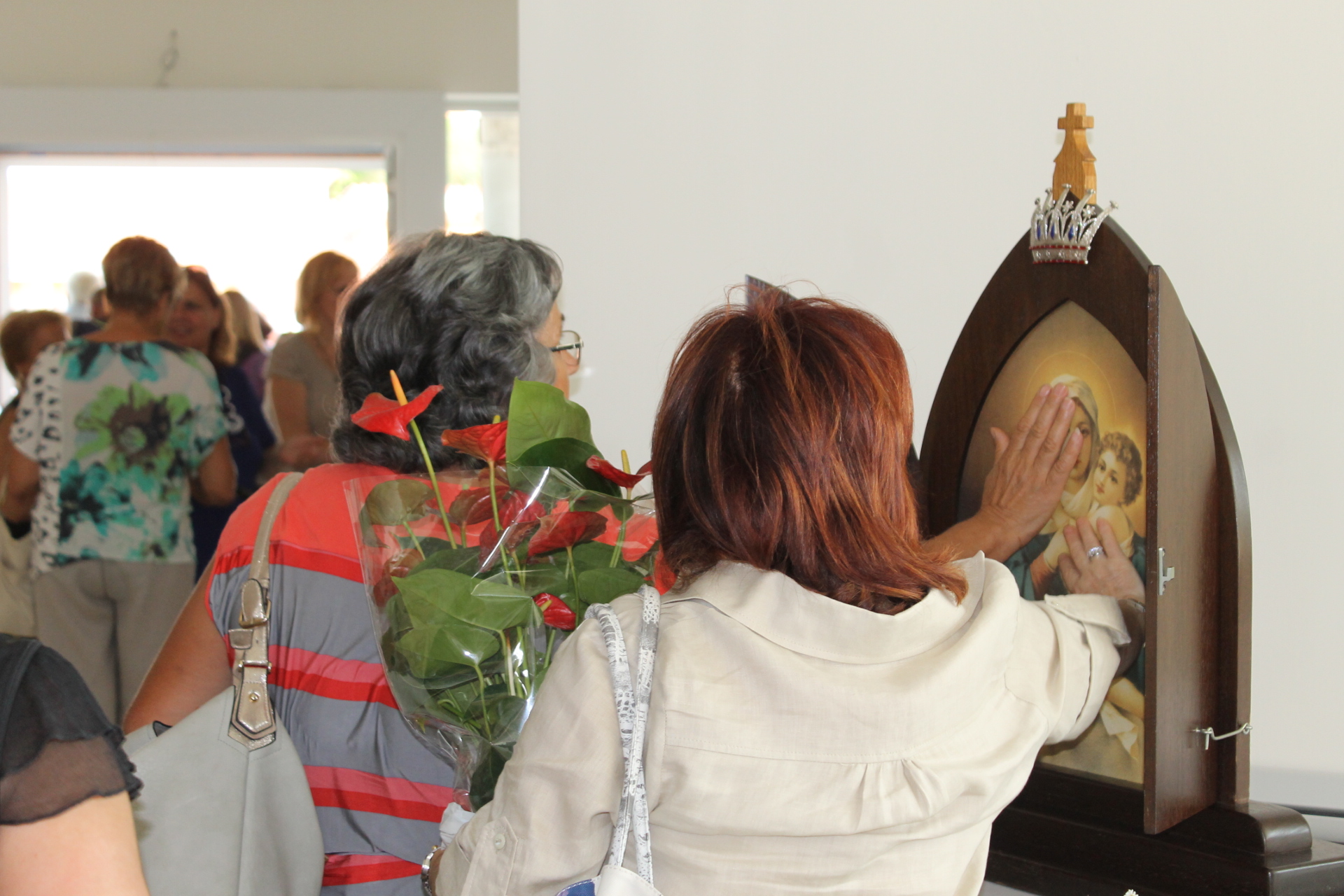