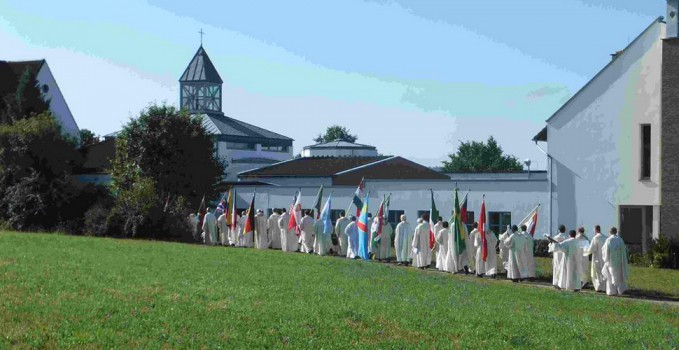 General Chapter of the Schoenstatt Fathers: An Invitation to Thank and Pray

On 18 July 2015 fifty years had passed since the foundation of the Secular Institute of Schoenstatt Fathers, a community of priests that lives the same spirituality as all the other communities and members of the worldwide Schoenstatt Movement, but at the same time serves the entire Schoenstatt Movement as its pars motrix et centralis (its central and moving part), and is hence the focus of interest for everyone.

Even before the Chapter they have been reporting on their website about the subjects to be discussed during the Chapter:

Eighty-seven applications have been made to the General Chapter by the regional chapters, and some groups or members of the community. The two fields for which the most applications have been made are the self-understanding of the community and the training and formation of its members. On one occasion Fr Kentenich said, “After fifty years each community has to re-found itself”. This is precisely what we are facing this year. How are the Schoenstatt Fathers to be trained for their work in the Movement in the time to come? What are the challenges posed by the huge international spread for the self-understanding and the unity of the community? In addition to these applications, others have been submitted with regard to the fields of government, the free communities and the Schoenstatt Movement, we are told with trusting openness in the website.

Here in Schoenstatt, and also worldwide, we have experienced for a long time that everything has aimed at preparing for the Chapter, and that this work has absorbed their energies considerably. We feel their commitment and that the Chapter is the great objective that has mobilised many forces; we also feel their concern.

It’s not that it doesn’t concern me

“If I am attached to Schoenstatt”, our founder said, “I will identify with everything that concerns Schoenstatt, and with what is happening in Schoenstatt” (1933).

After matriculation I began my path through life with the community of the Schoenstatt Fathers, and owe it not only what was perhaps the best theological education in the 1960s at the Universities of Munich and Munster, as well as the outstanding formation in the community and the possibility to influence its beginning, but also the possibility to meet our Father on a number of occasions. The wayside shrine on the outskirts the forest on Mount Sion was a gift of my course at that time, and was blessed by Fr Kentenich on 8 July 1967. It was the occasion on which he held one of his Sion talks on the path to the Sion Shrine, which was 45 years old on 30 August.

Schoenstatt owes the Fathers a great deal, as does each community and each country, as I do personally. I hope that what I have written will inspire everyone to think about it.

For what am I praying?

The place of the Schoenstatt Fathers is irreplaceable. A week before the start of their General Chapter I ask myself: What do we expect of them? What do we expect of there work here in Schoenstatt, in the various communities, in the different countries, in the General Presidium, in collaboration with everyone, and in particular with the other communities of priests, and also the many projects that can be traced to their initiative or inspiration, through which Schoenstatt offers an answer to the voices of the times?

I am sure that I will pray for vocations, many, good vocations; I will be praying – in the spirit of Fr Kentenich in Heavenwards – for “work” for them and “a rich blessing”, and for the courage to “found anew to the origin true” …

I am sure I will be praying for each of the 42 Fathers who has been called or chosen to take part in the Chapter. Their names and faces will appear from the beginning of the week on their website. I can recall stories about many of them …

I thank the Schoenstatt Fathers, the community and the many individual Fathers. I also thank for the idea and the possibility to express my thanks through this article, and to invite you to pray.

Participants of the General Chapter

News on the website of the Schoenstatt Fathers
Tweets by @2015_fathers