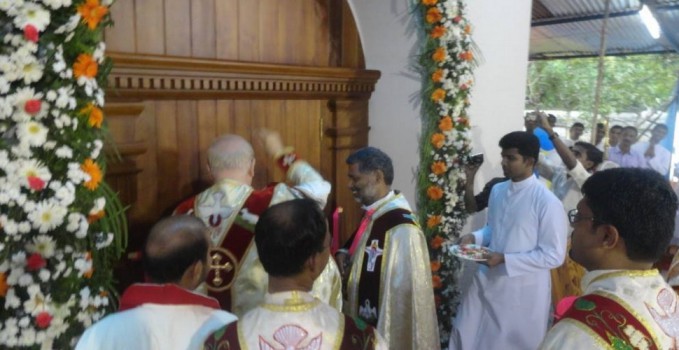 Did you know there was a Schoenstatt Shrine in Kuttur, India?

Did you know there was a Schoenstatt Shrine in Kuttur, India? The editors of Schoenstatt.org admit that they didn’t. That is why almost one year after it`s blessing on August 31, 2014, this shrine is appearing for the first time on Schoenstatt.org – proving once again that Schoenstatt.org, which serves the whole of Schoenstatt, is “nothing” without the motivated volunteer correspondents who feel urged to communicate – via Schoenstatt.org – to all Schoenstatt about what God and his instruments bring about in their their region, their community.

Back to the Shrine in Kuttur, which was discovered while checking the international website of the Schoenstatt Fathers for news about their General Chapter. 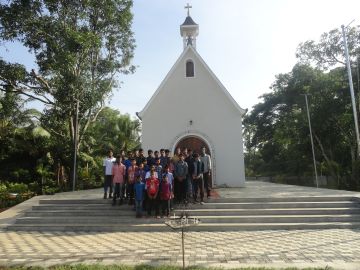 The Sion Centre at Kuttur is a Movement House of the Schoenstatt Fathers in India, home of SALTT (Schoenstatt Academy for Life Transformation and Transmission).The Schoenstatt Academy for Life Transmission and Transformation (SALTT) was publicly launched at the Sion Centre on 29 December 2012. The 600 participants of the program include eminent personalities like Bishop Pastor Neelankavil, his Vicar Fr Davis Chiramel, Vicar of Kuttur Fr Augestine Mangalan, filmstar Miss Malavika Vailes, the singer Miss Sreelakshmi, etc…SALTT was originally conceived as a means of reaching out to youth and families in order to build a platform for a wide Schoenstatt Movement.

With SALTT we hope to build-up a centre oriented to the Schoenstatt Movement. Saltt presents various programs and activities as means of transmitting values aimed at uplifting people and enabling them to face the challenges of today’s’ world.

OUR VISION is to promote a society of integrated personalities based on healthy psycho-social and spiritual foundations. It includes the cultivation of a covenant of love culture based on pedagogical principles of formation.

OUR MISSION is to form free, firm and spiritual personalities, who aim at the realization of the God-given purposes of their lives, and thus create a culture of love and life by forming children, youth and families.(source: http://www.salttlifeschool.com)

A Home for Children and Youth 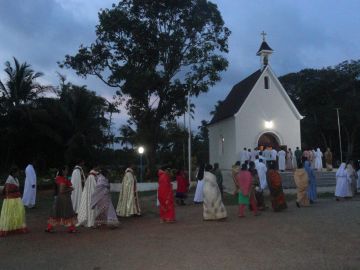 There is also a Shrine! The Schoenstatt Fathers of the Sion Centre in the diocese of Kuttur, Kerala, share the following:

“It is almost one year since the shrine was blessed. We are happy to share with you that our shrine has become a home for many, especially the children and youth. Every day some young people from our area come here to play near the shrine. They mainly enjoy playing football. Some months ago we started to hold a daily hour of adoration and rosary in the shrine. May a spiritual fountain flow from the shrine to youthful hearts! Last week we had Holy Mass in the shrine with the boys for whom we care in our Jeevalaya, a home for the needy. On another day we celebrated Holy Mass with the children whom we help with their studies. We wish you many blessings from the shrine; may our MTA win youthful hearts to herself. We remember all our friends in our prayers in the shrine.” (Source: Schoenstatt-fathers.org)

Remembering the blessing of the Shrine one year ago 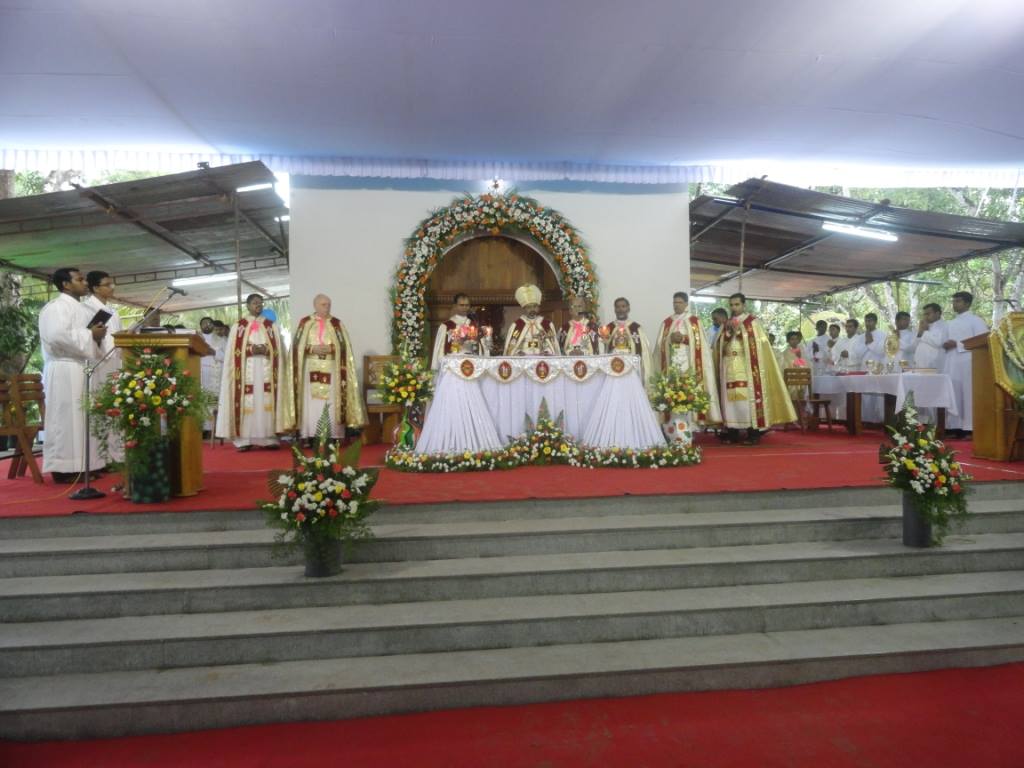 Under the heading “Finding the Shrine in Kuttur” we even discovered, this time on Facebook, a short account by Fr. Fr. Paul Panamkulam on the blessing of the shrine on August 31, 2014.

“That was a great and unforgettable day in the history of our Sion Community! A dream to build a shrine for our MTA in Kuttur was fulfilled. It rained heavily as the shrine was blessed. We Fathers, along with Brothers and Sisters from different religious communities, many diocesan priests and more than one thousand five hundred people, witnessed the blessing of this shrine. Fr. Francis Bruegger, the delegate of the Superior General to India, opened the shrine by cutting the ribbon and proclaimed that the shrine was the abode of the Blessed Mother of Schoenstatt. The shrine was beautifully decorated by the Schoenstatt Sisters of Mary. Bishop Pauly Kannookadan mentioned in his sermon that Schoenstatt has a role to strengthen the church through the renewal of the family and of youth, and through devotion to the Blessed Mother. After the blessing ceremony we renewed the covenant of love with the Blessed Mother. How wonderful it is to be in the house of Blessed Mother! All the people visited the shrine after the Mass and all enjoyed a delicious simple dinner. Deo Gratias! We proved that we love the Blessed Mother. May our dear Mother intercede for us by abiding in this shrine.

I would like to extend my heartfelt thanks to all of you for your prayers and sacrifices to build this beautiful shrine for our MTA. May a covenant culture grow deeply during these centenary celebrations; we shall show our love to our Blessed Mother through our actions and be filled with fire for the mission entrusted to us by our Father and Founder. Thank you all once again for all your contributions and wishes. May our world become Schoenstatt!” 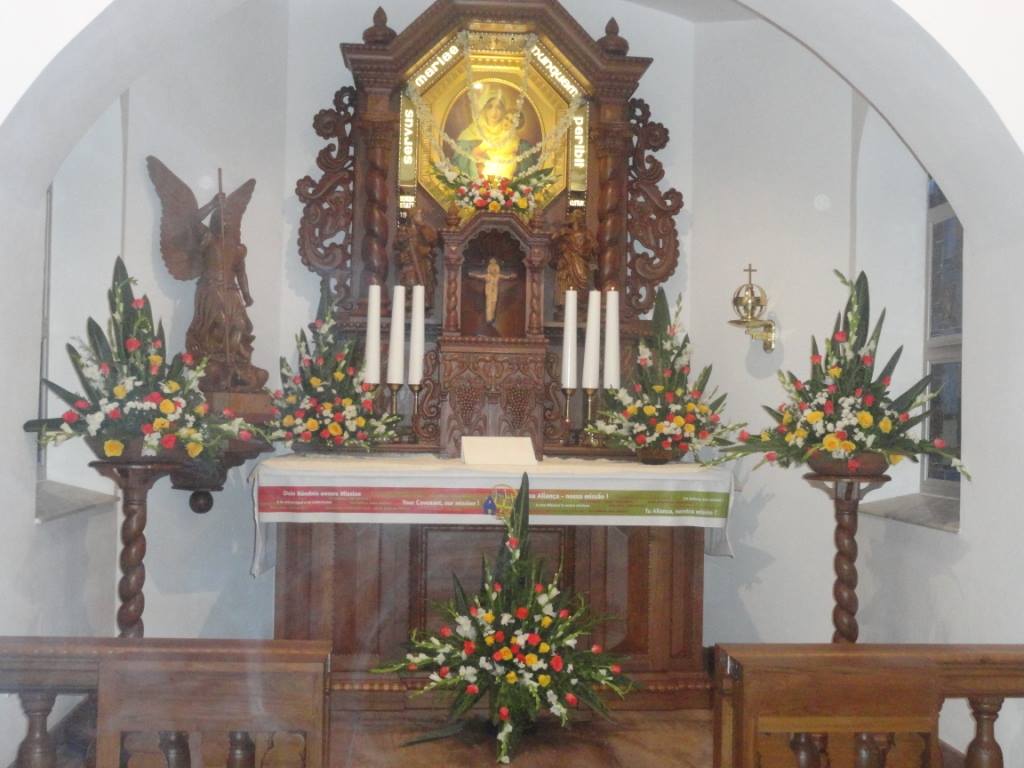 The first Indian Schoenstatt Father to be ordained was Fr Roy Vennookaran in 1994. Since then the Indian Region has been the fastest growing community of the Schoenstatt Fathers with 56 Fathers and 45 students and novices (February 2015).

News from the Schoenstatt Fathers` General Chapter at: http://schoenstatt-fathers.org/en/news/5th-general-chapter

!The team of Vinculo, Chile, answered the question: Did you know… wiht a clear: Yes. The tean created a world map of the shrines, based in part on the data from former services (they provide gps data, but not all are checked): https://www.google.com/maps/d/u/0/viewer?mid=zcMYDhZYq9Vc.khkQFDTMrQ9I