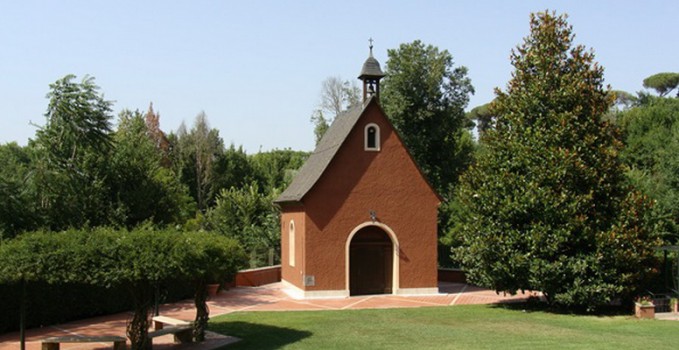 On 25 October many years ago, Divine Providence chose a small place in the shadow of St. Peters’ Basilica in Rome, where Mary Most Blessed elected to dwell, and lives as the Heart of the Church, at the service of the Church, and as a solicitous Mother always ready to welcome her children.

This small place is the Shrine Cor Ecclesiae situated on Old Aurelia Road, 112-Rome, and is administered and cared for by the Institute of the Sisters of Mary of Schoenstatt, who are at the service of the Church and of the Schoenstatt Movement in Rome and the rest of Italy.

The 25th anniversary of the Cor Ecclesiae Shrine

This year, 2015, the first after the Centenary of the Covenant of Love, the Roman and Italian Schoenstatt community has just reason to prolong the solemn celebrations because of the 25th Anniversary of the Cor Ecclesiae Shrine. A Shrine that over years has seen the presence of Sisters who with dedication and passion have sown the seeds of the Movement in Italy first through the formation of small groups of Covenant formation, and secondly in accompanying the family and youths thereafter.

It is not easy to tell a story of a quarter of a century without mentioning names that are dear to the Roman Family and those who have passed through the Cor Ecclesiae Shrine: Sr. Erika, Sr. Annetraudis, Sr. Lisianne, Sr.Neida, Sr. Asuncion, and Sr. Marie-Johanne, which is just to mention the Superiors who have followed one another throughout the years, and dear Sr. Fatima, the current Superior, who together with the Sisters currently present, is actively preparing for the October celebrations.

Every name carries with it a story, an ideal faithfully pursued, a talent offered, and if the Roman Family is what it is today, much is due to them. Their care of the center is manifested also in the restoration just concluded that shines out from the Shrine with its simple beauty.

The Cor Ecclesiae Shrine has borne witness to important and pivotal events in the history of the entire Schoenstatt Movement:

Camillo Cardinal Ruini did the Crowning of the Mother and Queen Thrice Admirable done by on 15 September 1994. Beside a large number from the Institute of the Sisters of Mary, numerous representatives of Church and the International Movement took part.

Pope John Paul II, now canonized, visited on 29 December 2000 at the conclusion of the Great Jubilee for a private visit to which members of the Movement in Rome were witnesses.

The erection of the plaque—Mission of the Sisters of Mary. The then Prefect the Congregation for the Doctrine of the Faith, Cardinal Joseph Ratzinger, presided at the ceremony. While a Cardinal, he enjoyed visiting the Shrine every once in a while to pray and to visit the Sisters’ community.

Cardinal Eduardo Martinez Somato, great friend and benefactor of the Movement, presided at the ceremony of the Father Symbol installation on 16 November 2008.

With the wish that Pope Francis too will one day pay a visit to our Mother, we see how the close proximity and concrete presence of the popes and of the whole Church represented here in Rome by the Holy See, compels us to be, in the shadow of this Shrine, an ever more true and authentic witnesses of Christ. The world, without wanting to, watches us! Every Schoenstatt pilgrim who comes to Rome, in fact, visits the Shrine and finds a Roman family. Well then, what do we wish him or her to see? We wish to be an outgoing Church, a Church that becomes a family for those who are weakest, the marginalized, a Church that becomes a beating heart vivifying the peripheries and capable of participating in a Marian culture that educates by paying particular attention to the culture in locations pertaining to each (University, politics, society, means of communication).

It is from this little place that the Blessed Mother has distributed her gifts and graces in abundance, and it is up to those who daily live the reality of being instruments for the future generations.