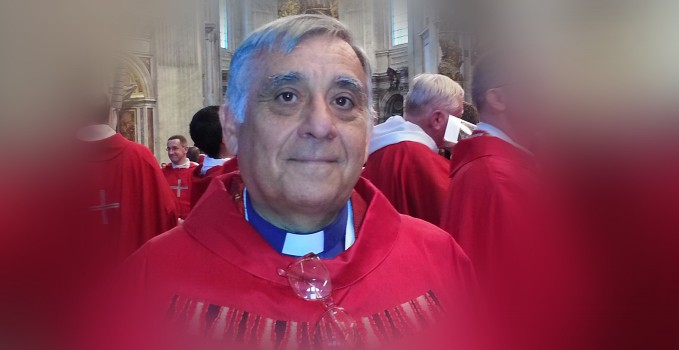 The Shrine of all of us

“Dear friends, brothers and sisters, June was a month with many visitors from Germany, Argentina, Uruguay, USA, Chile, Brazil and a pilgrimage of 80 people from Rome who had made a pilgrimage from the Cor Ecclesiae Shrine to Belmonte. They had Mass, lunch and a relaxed meeting here. At least 50 of them were visiting a Schoenstatt shrine for the first time, and most had never heard of our Family.

During Mass St Joseph was the first guest in the form of a statue that had been brought into the Domus Pater Kentenich [Father Kentenich House] on 1 May. On that day I entrusted the workers and the continuation of the building to him.” This is what Fr. Daniel Lozano, the rector of Belmonte, wrote in his monthly letter from Belmonte. This is how Fr. Daniel Lozano keeps the Schoenstatt Family informed about the events around the “Shrine of all of us”, the name the people gave to the Matri Ecclesiae Shrine at its blessing in September 2004. 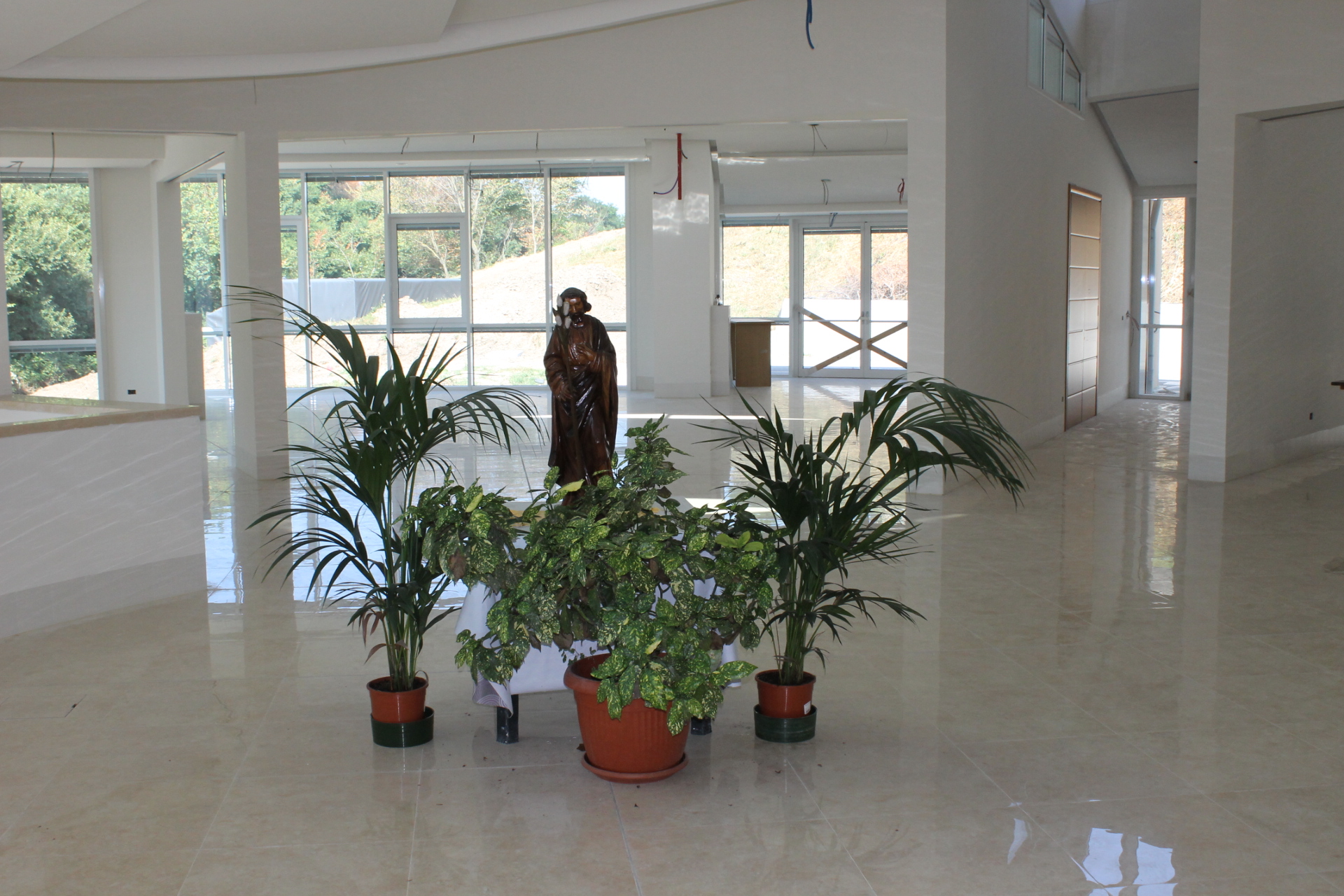 Many are surprised to find a statue of Saint Joseph in the hall of the Father Kentenich House. Gianni, the foreman and the person in charge of the maintenance of the grounds, explained to everyone who wanted to know and even to those who were not interested, that every time that he passes in front of the statue, he kneels and prays. Fr. Daniel’s letter continues: “Since that day, the work has taken on an interesting rhythm. St. Joseph has accepted the task I entrusted to him. We have to support him, and in this way give new life to the “Nothing without you, nothing without us.”

It is lovely to experience continuing a work in which nature and the supernatural, mankind and God, earth and heaven are one. It doesn’t mean that everything seems easier; it is in fact easier, more bearable.

My heart is filled with joy when I see how the whole Family is cooperating so that Belmonte can become “the Shrine of all of us.” I invite you all not to lose heart, but to continue to pray that our Father’s dream can become a reality. From Belmonte I pray for you, and with all my heart, (I) give you my priestly blessing of the Triune God,” 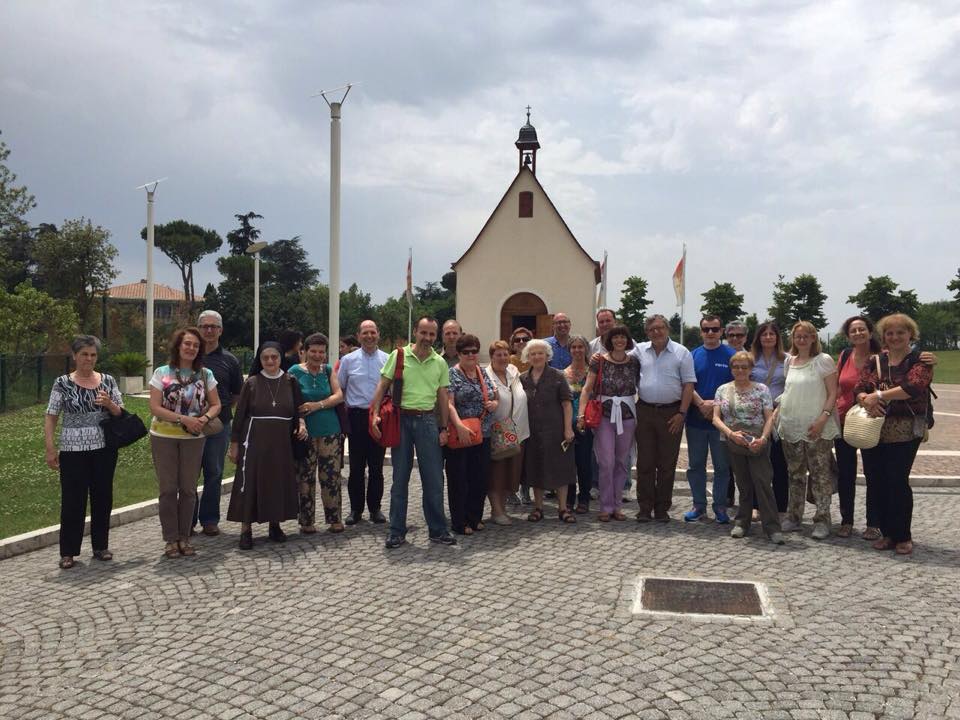 Where can I get pictures of our Lady of Schoenstatt with an Italian text? This was the question of a young woman from Trent in northern Italy who has been a missionary of the Pilgrim Mother for the last few months. Then her parents-in-law announced a visit; they wanted to stop over in Rome in their way to Trent. Gisela C gave them a tip: In Rome there is a Marian shrine they absolutely had to visit on pilgrimage. She could guarantee that they didn’t know it. And when they were there they should please bring along a pile of pictures. A few days ago Gisela C wrote, “My parents-in-law were in Belmonte and were most enthusiastic. I now have enough pictures with Schoenstatt prayers for everyone in Trent who is visited by the Pilgrim Mother. I hope to be able to join the meeting of the Italian Schoenstatt Family on 6 September, and to get to know Belmonte for myself.” 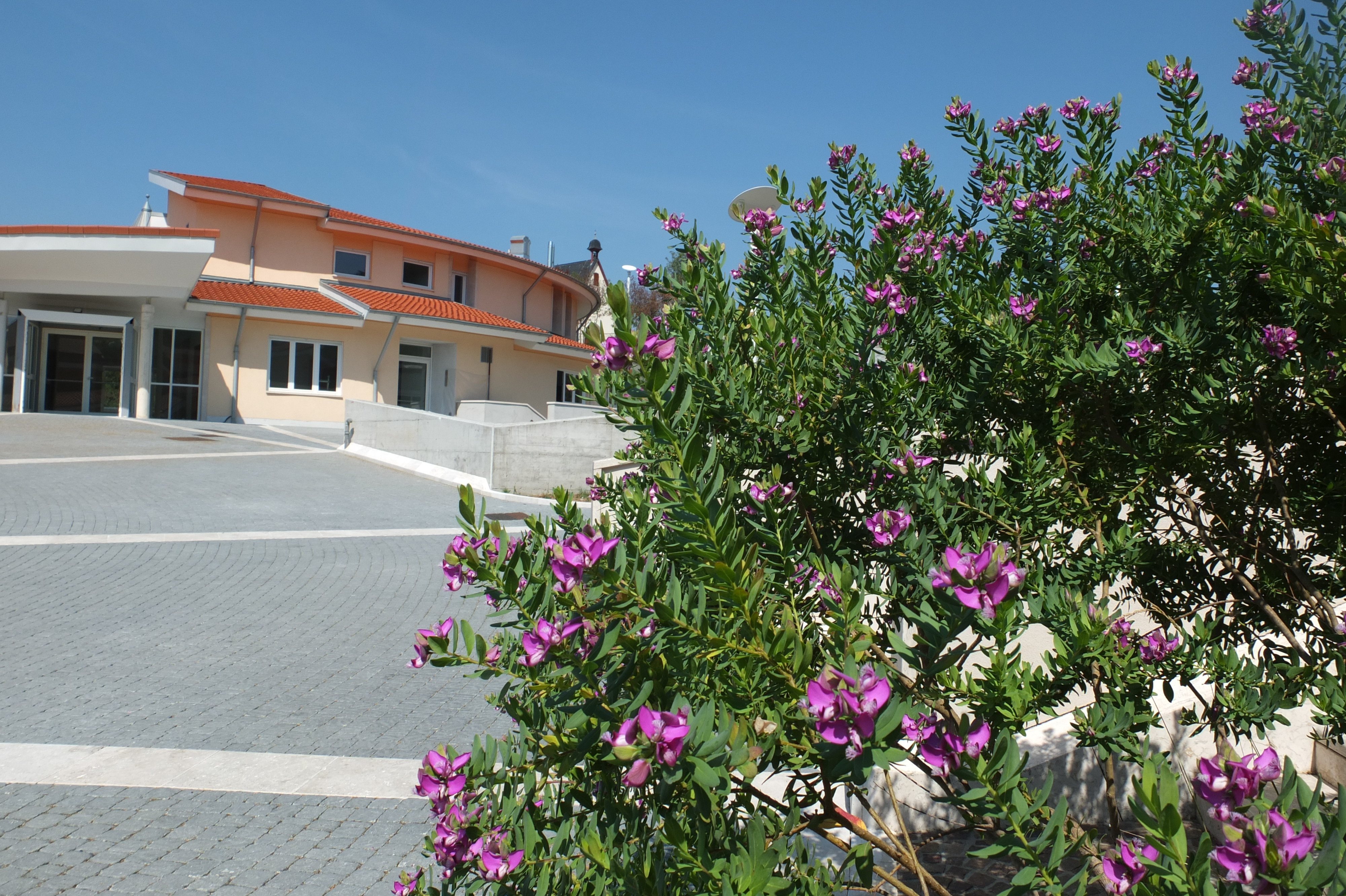 July and August are vacation months in Rome. Real vacations. Whoever can get away does so, because the heat is unbearable. Therefore, the last Mass in the Shrine will be celebrated on 16 July before resuming activities on 6 September with an Italian Schoenstatt Family gathering including Archbishop Ignazio Sanna of Oristano’s, a member of the Schoenstatt Institute of Diocesan Priests, presence. However the Shrine will also remain open during vacation. Throughout this time, the grounds can be accessed through the lower entrance at Via di Santa Gemma in the area of the Father Kentenich House. 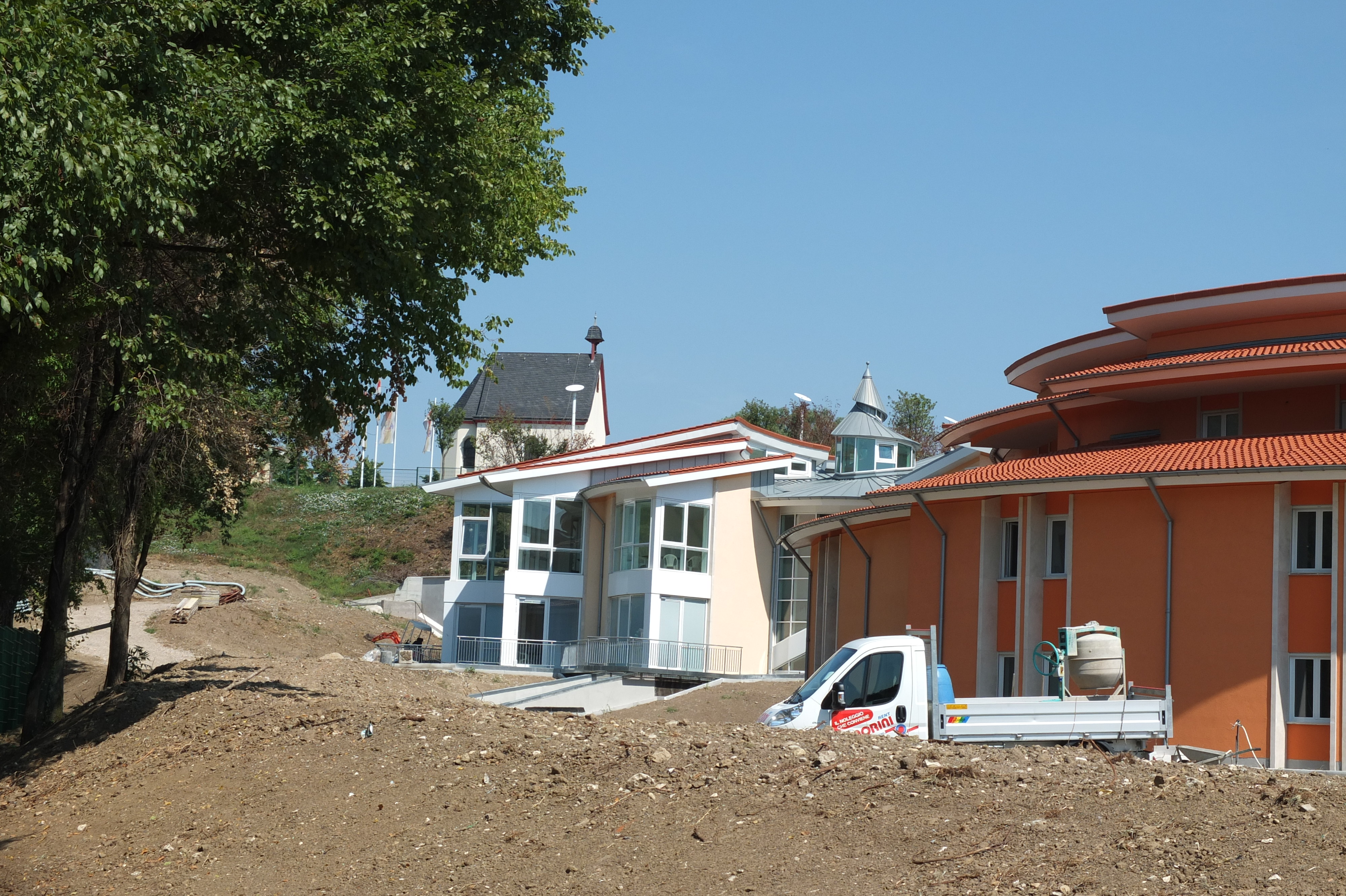 We will have the house soon

“When will the house be ready?” we asked Fr. Daniel. “We hope that it will be ready for use in December,” he answered happily. Funds are still necessary to finish the work, but what a gift it would be to be able to open the house precisely on the fifty years anniversary since the Second Vatican Council’s closing, the symbolic blessing of the cornerstone of the Shrine of all of us, and thus make a contribution, a gift from Schoenstatt to the Jubilee Year of Mercy that will begin on December 8th!

As it is already known, there will be something unique at the Father Kentenich House: the thirty-one rooms for pilgrims will have the names of countries where there is at least one Schoenstatt Shrine. Other halls will be dedicated to Schoenstatt personalities for now: Gertraud von Bullion, the first woman in Schoenstatt, Fr. Franz Reinisch, the martyr of being “loyal to the voice of his conscience.”

Schoenstatters are invited to contribute financially to their own country’s rooms or to countries that have a great spiritual richness to give, but perhaps they cannot afford to make a donation. The most important thing however is the invitation to “fill” these rooms, these halls, with the spiritual heritage of each country, the graces of their Shrines, the richness of their culture, marking what exhibits the Schoenstatt identity in this country that this country wants to place Belmonte at the disposal of great service to the Church.

This contribution will be expressed in a cross, a picture of the MTA, and a symbol that is proper for each country that will donate to the room that will have its name. The time has come!

Lost and found: Our Lady’s picture for the Philippines room 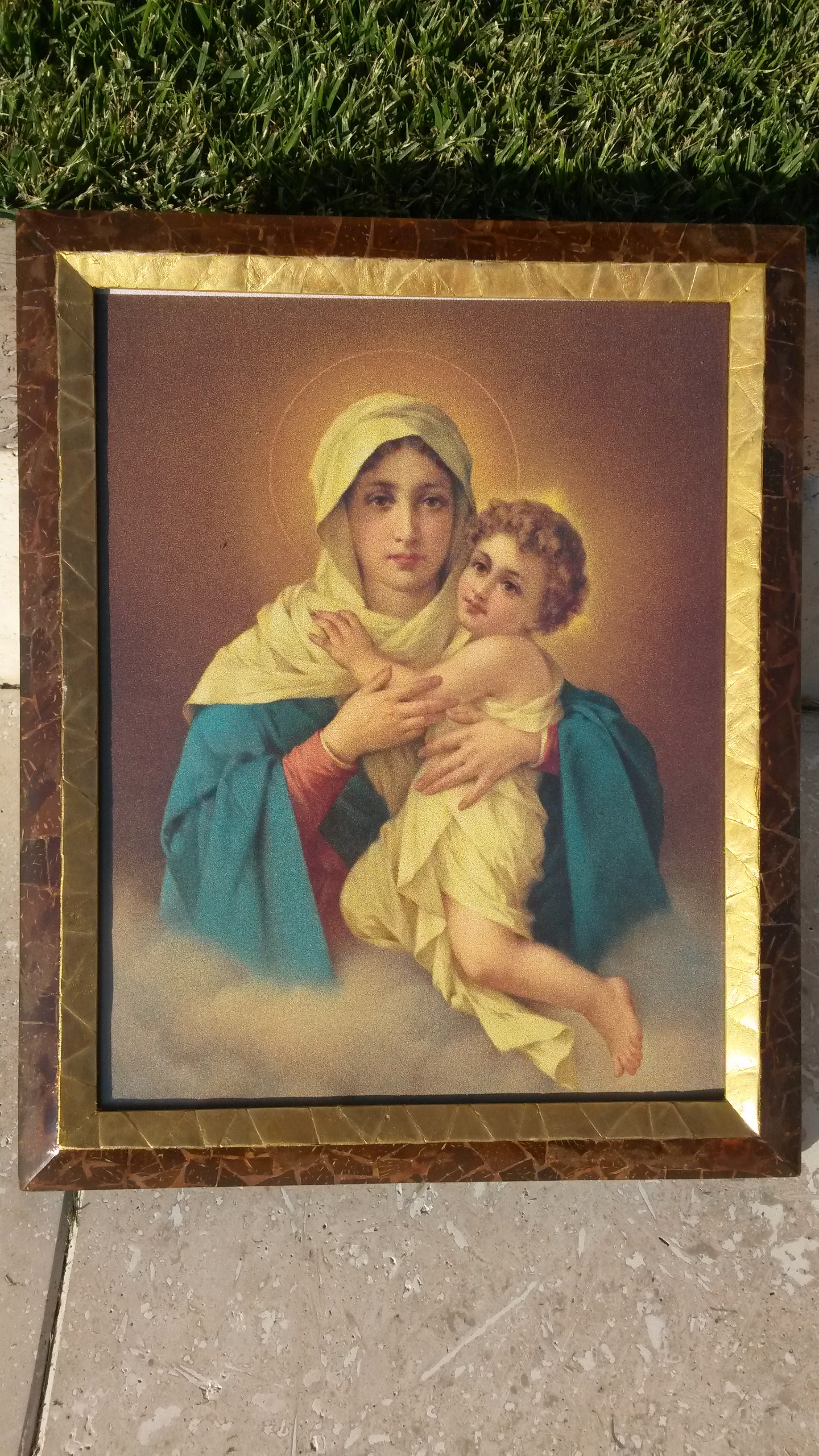 The first picture of our Lady of Schoenstatt for a room in Belmonte arrived already in October 2014. It was brought along by the Jubilee pilgrims from the Philippines so that it could immediately be put up when the house, and hence the “Philippine room”, is opened.

Brief panic in June: Where was it? The joy and relief were great when it was discovered in the Rector’s flat – he had had no idea what a treasure he was sheltering there.
In November the cross designed by the Philippine Schoenstatt Family will join it.

Good news for Chile: Fr Erich H. celebrated his Golden Jubilee of priesthood on 27 June. He donated 3.000€ for the Chile room in Belmonte from the gifts of money he received.

We will keep you informed…

“I received the Newsletter today, and I shared it with the Family from the Shrine of San Isidro and with other Shrines from Buenos Aires and Argentina. I belong to the Father Joseph Kentenich Secretariat of the Family of San Isidro, and I appreciate your offer of materials. I will keep this in mind. Thank you,” Silvina Ravarini wrote. “I know the Belmonte Shrine, I went twice in 2006 with the Schoenstatt Family from Florencio Varela, and for Schoenstatt’s 100 Years’ Jubilee, and I was impressed by how much the Belmonte Shrine has grown. It is very beautiful; I have some beautiful photos that I took during Schoenstatt’s 100 Years…”

Fr Daniel Lozano, the Rector, and the Belmonte Communication Team, would like to tell you in this monthly newsletter about life around “the shrine of all of us” in Rome, and about successful initiatives and projects, in order to enkindle your enthusiasm for Fr Kentenich’s dream of an international Schoenstatt Centre in the heart of the Church, and make it your own. If Belmonte didn’t exist already, it would have to be built. A shrine built on the foundations of love for the Church proven in suffering. A shrine for now. For the Church, and within it Schoenstatt as part of the current of renewal initiated by Pope Francis as we prepare for the Jubilee Year of Mercy. 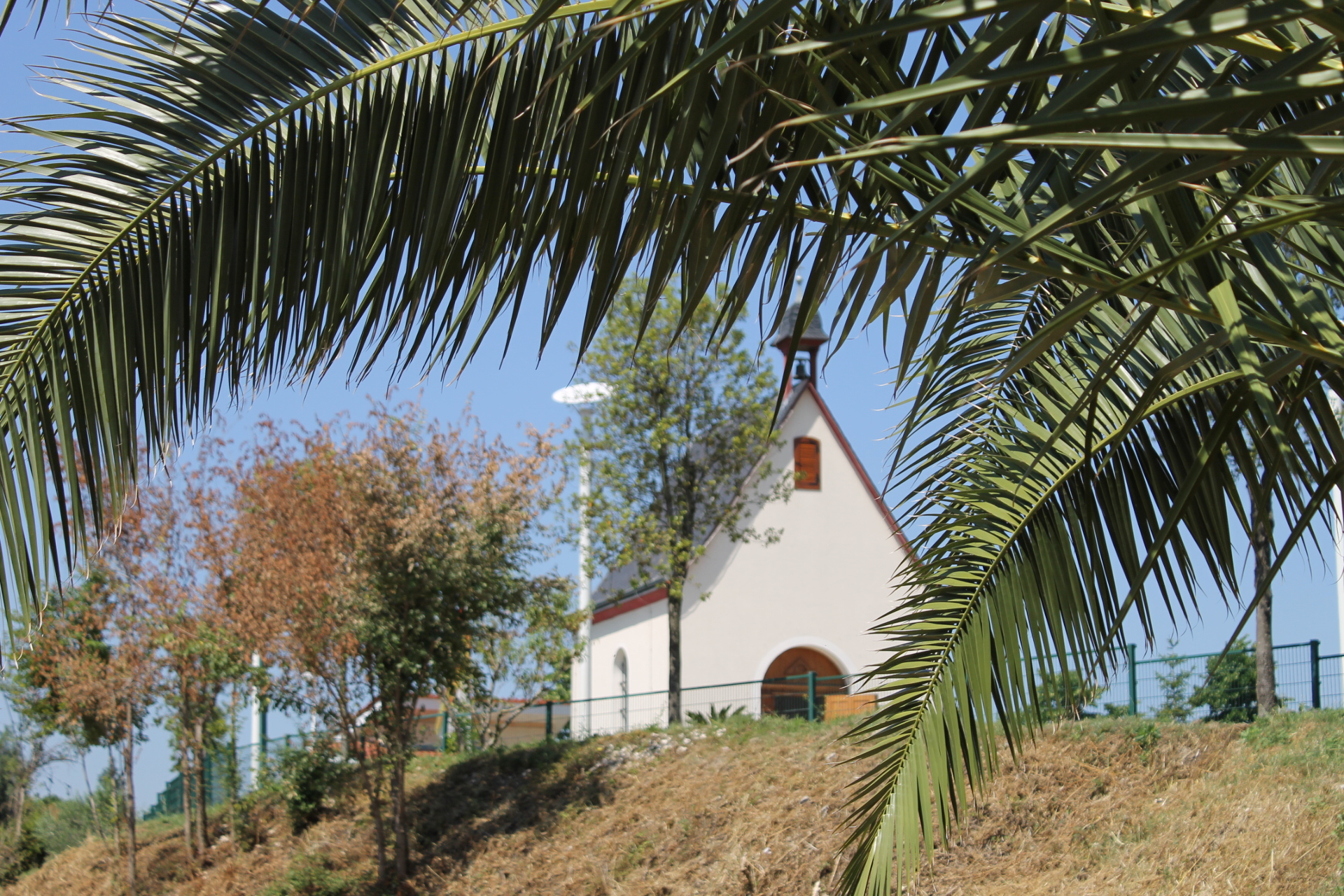 If you want to be informed regularly, please subscribe here