Posted On 2015-06-02 In Covenant Life, Covenant solidarity with Francis

Paraguay will welcome Pope Francis with the visit’s official hymn, “Thank you, Holy Father,’ that sounds like the Covenant of Love

“Thank you, Holy Father” is the song that has been chosen as the official hymn for Pope Francis’ visit to Paraguay on July 10-12. The hymn was chosen on May 9, during the celebration organized by the Paraguayan Episcopal Conference. The song competed along with eighty that were proposed. The Sub-commission of Sacred Music of the Episcopal Conference was in charge of selecting the subject.

The video shows the moment it was selected:

Shepherd with the smell of sheep…

“Shepherd with the smell of sheep
who goes to the peripheries
In search of the neediest ones.
You show us with simplicity of life
that to announce Christ is to love others…”

It is a simple, personal lyric; it is a lyric that sounds like the Covenant of Love and to the covenant of solidarity with the Holy Father. Among the faces of the interpreters in this video that began to appear on the social networks on the same day of the selection, one of them seems familiar…and at the same time “Some of them are Schoenstatters” appeared on Facebook.

Before sharing the joy, there was a search for reliable information, and a few days later, the response came from no less than Néstor Benítez:

“Yes! We were talking on the night of Holy Saturday at the Retreat House of Tuparenda.

Everything that we are experiencing is a great gift, and as such, we receive it with gratitude to God and the Blessed Mother! Let me tell you that the Nazarenos are comprised of nine friends who have sung to the Lord for twenty years. Of the nine members, four belong to the Schoenstatt Apostolic Movement in Paraguay, so the Blessed Mother had a lot to do with this gift.

A big hug from Paraguay united in the Covenant in Covenant with the MTA!”

Néstor Benítez belongs to the Apostolic League of Families, Fabián Meza and Jorge Núñez are collaborators of the Apostolic League of Families, Emilio Garceta also joined as a collaborator of the League in 2012, he could not continue for reasons of work. He continues to sing in Holy Mass, and he is a very close collaborator of Father Martín, an “active pilgrim.” The Nazarenos are from Luque (a city that borders Asunción); there was also a celebration in Luque.

The news that the Nazrenos won was celebrated in a big way during the Sunday Masses in Tuparenda as well as in the Youth Shrine.

Francis’ presence is already felt. The days of his visit were declared holidays from work, and the preparations are underway. A large poster that says, “Blessed Mother, bless the Holy Father” has been in Saint Mary of the Holy Trinity Church in Tuparenda for a long time.

Something that is worthy to stress is the altarpiece being prepared by an artist from Misiones, who prepares something similar every year during Holy Week; his name is Koki Ruiz, and he will make it with the collaboration of the residents of San Ignacio (Misiones). He began with the task of collecting corn spikes, coconut and squash that will be used for the altarpiece decoration that will be installed in the Ñu Guazú Park for the main Mass.

In the beginning, the explicit participation of the Movements was not requested for the coming of the Pope. Just the same the Schoenstatters made themselves available, and many of those who are team leaders are Schoenstatters, and the youths are organizing many things. It is about a selfless service to Pope Francis, the Paraguayan Church, and the people. It is the post-Jubilee step; a step that the Schoenstatt Movement from Paraguay has already taken long ago. Labels are not necessary. What is important is the Covenant of Love within Schoenstatt and giving the fruits of this Covenant of Love. Schoenstatt was founded for this.

It is a love that generates creativity. Like that owner of “La Sanlorenzana” bus line who placed a large photo of Pope Francis and a quote referring to him: “Let us go with Francis!” instead of an advertisement.

Thank you Holy Father
Messenger of joy and peace
Thank you, Holy Father
For blessing Paraguay.

Live during the presentation 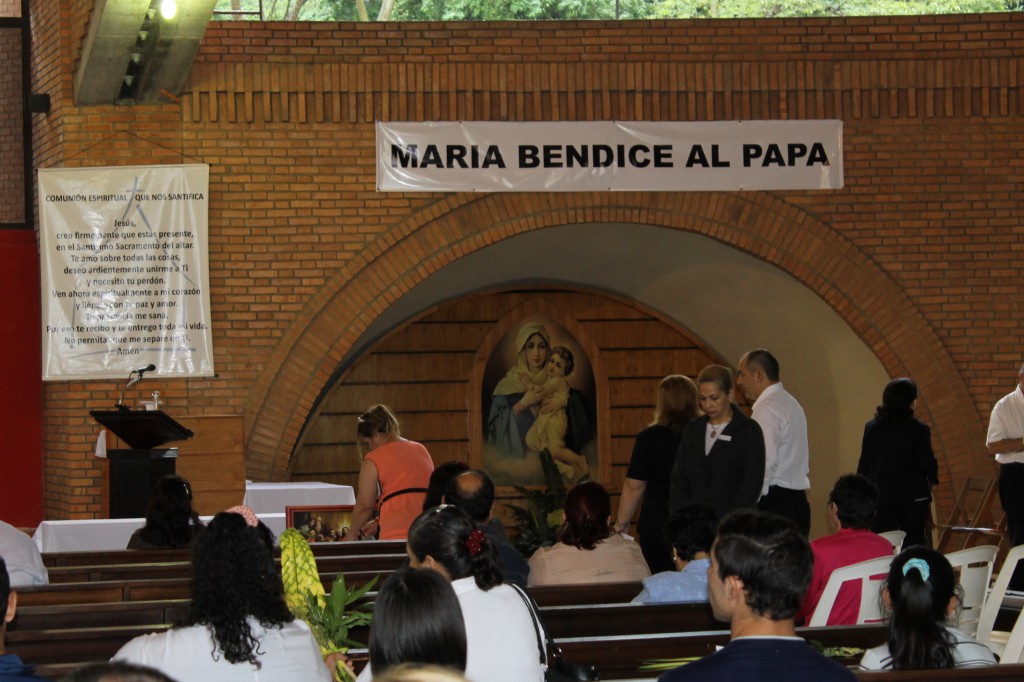