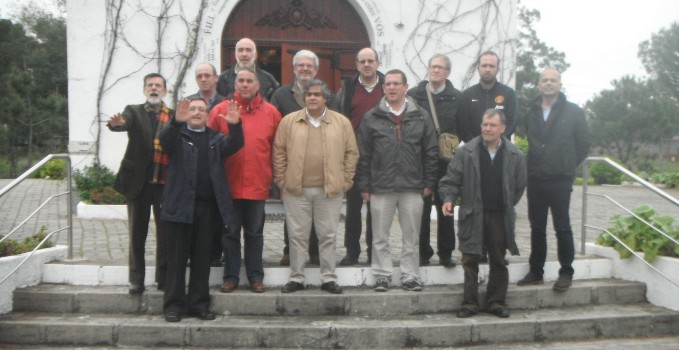 A dream – The first Worldwide Encounter of Men’s Leagues

With the great leader of the Rosario de Hombres in Brasil [Men’s Rosary in Brazil], Father Michael Lancaster’s encouragement, on June 18, 2001, the day on which 35 years of the Father and Founder’s conference about the re-founding (or the new founding) of the Men’s Branch was commemorated, an idea emerged to found the Men’s League in Portugal in the shadow of the Restelo Shrine (Cenacle of Father’s Family) in Lisbon.

Just as with all of God’s projects, we had to let things take their course. Consequently on July 8, 2005, the same day as our Father and Founder’s ordination in 1910, a group of four founders: Anthony Ruivo, Hélder Castro Valente, José Perestrelo and Luis Silva Carvalho (who already departed to the Father’s house) participated in a Mass, close to Father Joseph Kentenich’s tomb in Schoenstatt, which Father Herbert King celebrated, the bylaws that would govern the Men’s League in Portugal were left there.

Belmonte in 2004, a fundamental framework

Of course, one of the missions revealed to this League (a desire that emerged at Belmonte during the Consecration of the Shrine “of all of us” in 2004), was to gather the other men of Father’s family. Then on the November 26 – 27, 2005, the 1st Iberian Conference of Men’s Leagues in Madrid was promoted under Father José Manuel López Herrero’s direction. Three other conferences followed: 2008 in Lisbon, 2010 in Madrid, and 2012 in Gijón (Asturias), this last one, a living example of everyday sanctity, Jesús Cedeira organized.

From this gathering, the motivation emerged to create a Men’s League in Aveiro, Portugal, in the shadow of the Gafanha of Nazareth Shrine (Tabor of the Mother of the Church).

This dream became a reality in 2013, so in 2014, the two Portuguese Leagues met in Aveiro in what has been designated as the First National Conference.

The dream to go further

Recently, on May 16, 2015, the 2nd National Conference was held in Lisbon, and just as happened at the previous meetings, several projects emerged.

One of these projects and the reason for this message is to delve into the possibility of organizing a Worldwide Men’s League Conference in 2017 during the commemoration of Apparitions of the Virgin Mary in Fatima to be celebrated by Pope Francis.

Without any prejudice, Germany, Argentina, Brazil, Chile, Spain and Paraguay are the first countries that come to mind, and obviously others, where Men’s Leagues exist.

Therefore we would like to know if the Leagues from those countries are willing to participate in the meeting before we launch into carrying it out.