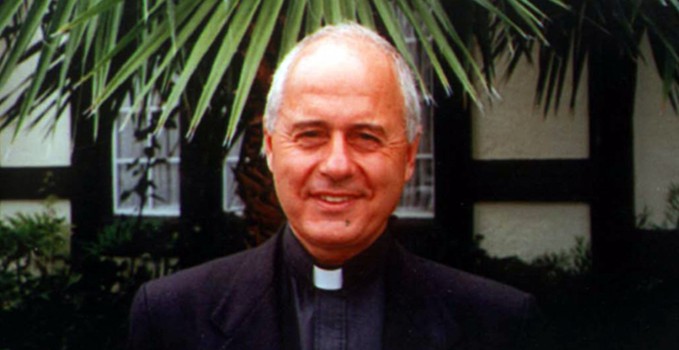 “His death left a seed that those of us who were at his side have to make germinate,” Ricardo Lanusse expressed. On Saturday, May 9 – on the 78th anniversary of his birth – one hundred people attended the “Encounter with Father Esteban Uriburu” close to the Sion Shrine in Florencio Varela. It was more than a tribute. The proposal consisted in deepening in his ideal of life to enkindle oneself in his fire.

To gather where he rests touches one, because it was there – where years ago there was only an immense landfill surrounded by poverty – Father Esteban dreamed about a wayside shrine, a sports and social center for the neighborhood people, the Shrine, and the house to shelter children while their parents worked, the workshops to teach trades, and the cemetery. Today they are an amazing reality for which he struggled and was able to make concrete. “Alberto, they do not understand me,” he would tell his friend and confidant, Father Alberto Eronti. Where others saw a vacant lot, he saw the 5,000 very beautiful trees that he obtained later and that he invited us to plant in another memorable workshop. 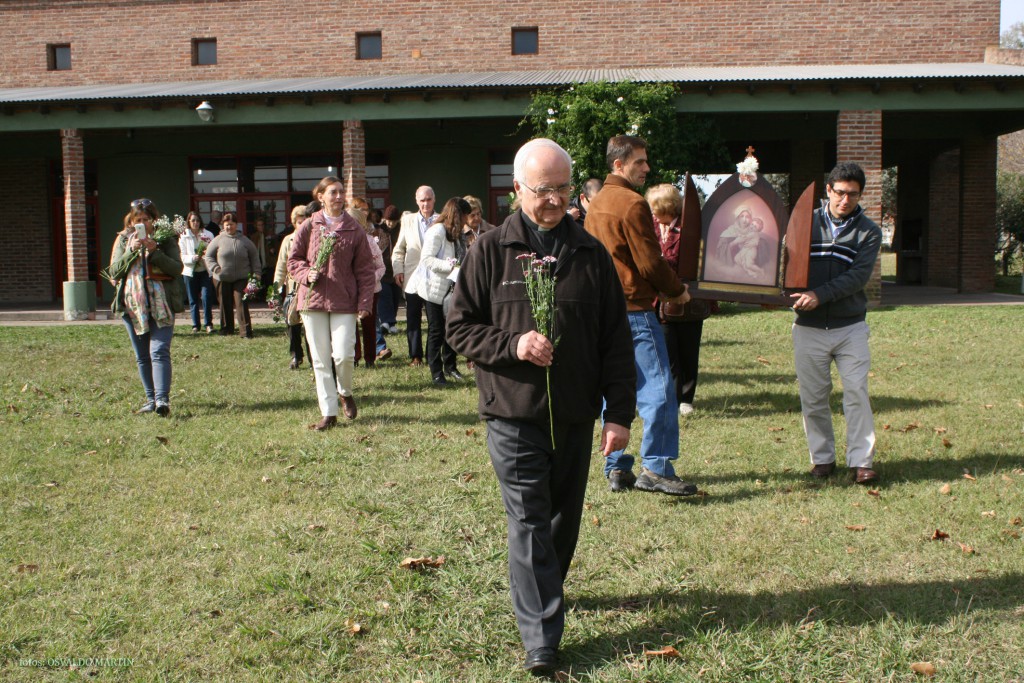 A holy life that passed through our lives

Techi Pretel opened the workshop on a sunny autumn day, she expressed gratitude to the organizers, and she pointed out the posters with phrases and photos of Father Esteban that decorated the walls of the Joseph Engling Hall at Tierra de Sión [Land of Zion]. Then she introduced the Bombiens, who shared their memories of Father Uriburu.

“I had the honor and the privilege of being a very good friend of a Schoenstatt great,” Ricardo Bombien said. We shared Esteban’s beginnings in the Schoenstatt Movement during the 50’s: the first youth group to which he belonged until he became a lawyer and entered the seminary. And he accompanied him to tell his father about his decision to become a priest. “I shared unforgettable moments of great interior depth. I am a witness of Esteban’s drive, the courage and unconditional commitment since his youth and throughout all of his priestly life,” he related.

Bibiana Bombien, who knew him since she was Ricardo’s girlfriend recalls: “We grew up together, he as a priest, and we as a young couple. He loved the Blessed Mother greatly. His gaze was testimony of God’s love that was in his heart, especially an enthusiasm that did not let us rest. And all of us had to embark in his projects, which at times seemed madness. He was a contemplative. He was always praying. His rosary, the celebration of his Mass, those Eucharists that one cannot forget…He made us experience the Eucharistic mystery greatly.

Bibiana continued before everyone’s emotional gaze: “His way of speaking captivated. We realized that he lived what he proposed. He did not say anything that he was not willing to carry out, or that he was not capable of doing. He questioned us: ‘How much time do you spend on your knees before the Blessed Sacrament as a couple?’ And we realized that we had to grow in adoration in order to grow in faith. These are everyday things, but they are very profound: it is about a holy life that passed through our lives.” 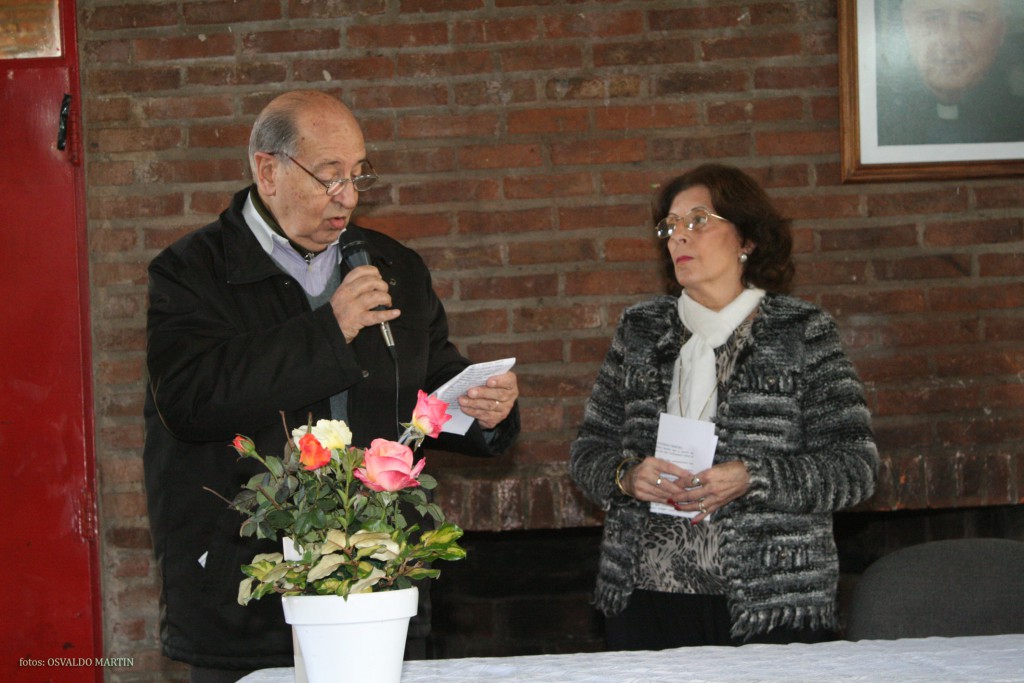 A fascinating personality at the service of a great mission

Father Alberto Eronti began his reflection with a prayer of gratitude to Father Esteban “for the inheritance that you left us, especially your profound and intense love of Christ, Mary, the Church Schoenstatt and the world.” Then he recalled an experience during a time at the Seminary in Münster, when Esteban said: ‘Alberto, do you realize that the saints decide the life of the world, the future of the Church. We have to be saints and to pray to the Blessed Mother for the grace of holiness’.”

Father Alberto referred to Father Kentenich’s phrase: “You cannot be a priest today if you do not experience an intense passion for God, for man and for the world.” And he affirmed: Esteban was passionate about these three things. He was a fascinating personality at the service of a great mission. He was an aristocrat, a gentleman, a dreamer, he was noble, an idealist…and above all humble, which truly made him great. Esteban made his priesthood the great adventure of his life. A holy adventure.”

Recalling his delicate religiosity that he received from his grandmothers and especially from his mother, Father Alberto stated: “There was a great spiritual depth in Esteban that he himself could not entirely measure. Schoenstatt came to his life at the right moment, and it gave him a clear spiritual road – the Covenant of Love with Mary – and a place of belonging: the Shrine. There he experienced Mary, the Mother and Educator. In Father Joseph Kentenich, he found a model to look up to and admire. His intuition became a conviction: this is my place in the world.”

He was ordained as a priest in 1971; Father Esteban began his priestly work in Chile in a very humble parish. This allowed him to learn about the reality of poverty, social injustices and family problems. Upon returning to Buenos Aires, he began to work within the Movement. He quickly warned that structures are good if they are dynamic and serve life, but if they harden, they extinguish and kill life.

His Personal Ideal was “Marian light of Father’s mercy and victory.” Father Eronti emphasized that “Mary’s light illuminated his life and developed the desire of being, like Christ, a source of mercy in Esteban. Father Kentenich’s person and charism helped him enormously on this road .In his eagerness for broadness and universalism, he also found understanding in Father Kentenich’s priestly and paternal heart, who baptized him as ‘the new Christopher Columbus’ and he sent him forth to all corners, to the peripheries.”

He continued: “With him, they shared the daring of a passionate temperament with the helplessness of a child. The two parts were important so that God could use him as an instrument of love in his hands. The crisis of depression made him a profound child before God. He understood that the fruitfulness of his enthusiasm depended on accepting his helplessness. And this allowed God to do his work. Esteban was such a child because God wanted him as such a Father. His passionate character led him many times to visualize possibilities, projects, dreams that not everyone else could see. When he felt that others did not see what was clear to him, he experienced the loneliness that misunderstanding involves.” 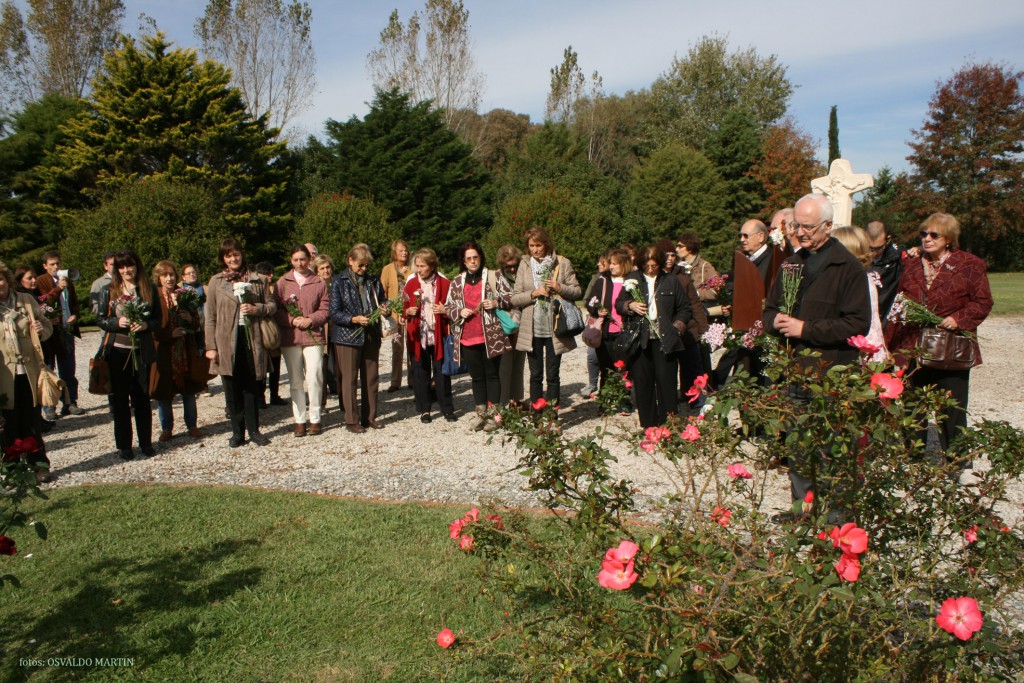 Trust and heroic giving of self to the Blessed Mother

Around noon, everyone went on pilgrimage to the Cementerio “Hacia el Padre” [“Heavenwards” Cemetery] to place flowers on Father Esteban’s tomb. There, Ricardo Lanusse, his good friend since their youth, gave his testimony: “I had a very strong relationship with him. We studied together. Both of us played rugby. I was once kidnapped. I am here because he offered his life for me.”

Ricardo recalled that “Esteban had a profound mission consciousness that God had entrusted to him: he opened all roads possible to Schoenstatt. Two attitudes that always accompanied him allowed him to find and to open those roads: his trust and heroic giving of self to the Blessed Mother. He was a man of God who we admire and who we follow, impelled by his charism and commitment. And he did it. Now it is our turn.”

A champion of Practical Faith in Divine Providence

During the afternoon, Father Eronti presented his second reflection about the main subject of Schoenstatt spirituality that Father Esteban lived profoundly: Practical Faith in Divine Providence. He said: “To discover the work of God and to decide to collaborate with him fascinated Father Esteban. It was a reality that defined his life. He lived in the present, but he did not stop viewing the horizon, discovering the next play ‘with the hand on the pulse of times and ear on the heart of God.’ (Fr.K)”

He recalled that “Esteban had his way of ‘checking’ if what he saw was in God’s plan: he presented his projects to others and he listened to their opinion. This led him to seek allies for his projects, in heaven and on earth, and to develop a special way of praying. He prayed for a long time on his knees, he sat and took his diary. There he wrote what he was conversing with God. For him, to pray was to write about the God of life, of his life, that of Schoenstatt, the Church, the country, the world. He did this ‘supernaturally naturally.’ His Practical Faith in Divine Providence made him see everything as from God and God in everything. For him, God was a God in action. A God who acted loving and loving to act.” And speaking to his course brother, Father Alberto concluded: “Esteban, I believe that you have walked a road of holiness. You have been a great one.” 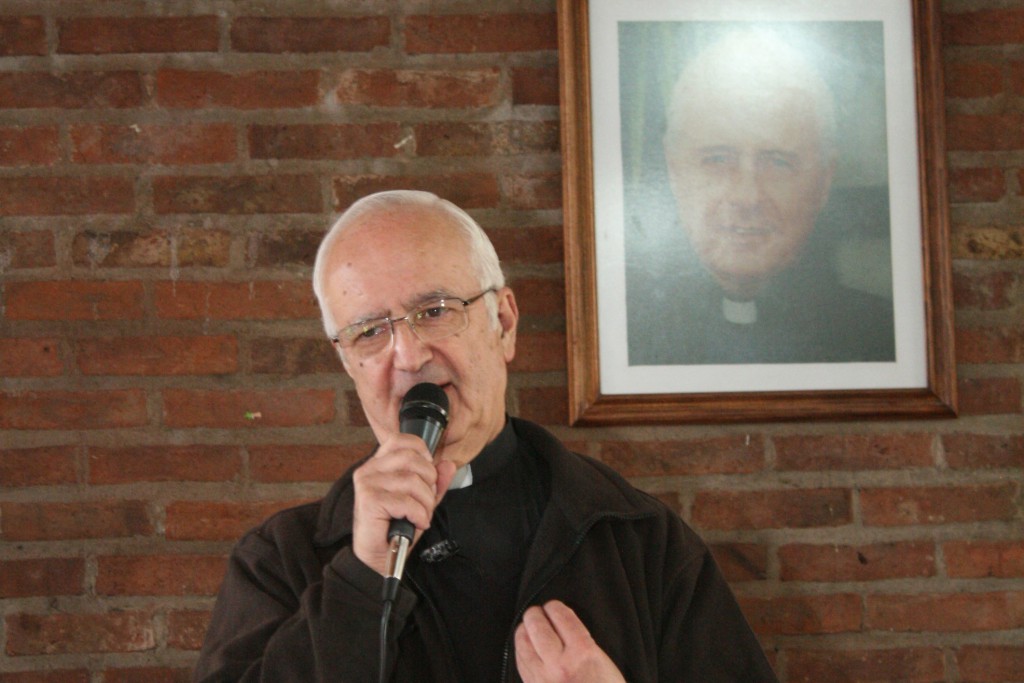 Invade everything with the fire of the Lord

The task of discovering Jõao Luiz Pozzobon’s greatness and importance and of spreading his work internationally was Father Uriburu’s mission – along with close friends and collaborators. He was the Saint Paul of the Campaign, and he loved it profoundly. Filled with missionary zeal, Father Esteban prophetically said in 1984: “I am convinced that the fire that was enkindled in Santa María and that kept Joao Pozzobon afire is going to start a large fire in the world. I believe that the Virgin is preparing a great invasion. We must invade hearts, families, the media, and structures. Invade everything with the fire of the Lord. Day by day, in the prayer of the rosary, we want to enkindle ourselves, re-enkindle ourselves in this flame of love that is the heart of Christ, the heart of Mary. May the rosary help us to always keep this fire ablaze.

In this spirit and toward the end of the Eucharist celebrated in the Shrine, they lit the small candles –including those of many from afar that wanted to join us –and everyone renewed the Covenant of Love. They prayed to the Blessed Mother that Father Esteban’s torch will continue to spread the fire of Christ who lived in him and that many will continue in the footsteps of this loyal son of Father Joseph Kentenich.