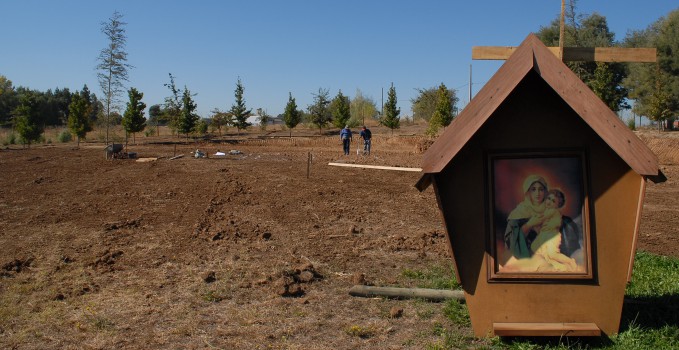 Construction of the Tierra Escogida Shrine has begun in Talca

In the year 1992, in Tacla, a group of couples gathered for the first time in the home of Fernando Bobenrieth and Martita Kulkis to begin their road to Schoenstatt. Father Horacio Rivas arrived very soon to these lands; the following year, the first Covenants of Love were sealed, and two years later the Wayside Shrine was blessed.

This is how the Schoenstatt in Talca was born, which has grown in Covenant life throughout twenty-three years with abundant contributions to the Capital of Grace constantly offered in an authentic attachment to the place of grace.

In 2001, the spiritual and material conquest of the place was begun, and at the beginning of 2002, the Blessed Mother was enthroned. In 2007, the bishop authorized having the Most Blessed Sacrament in a permanent way. Since then, Jesus, along with his Mother, shelters, transforms, and sends us forth from this Tierra Escogida [Chosen Land]. 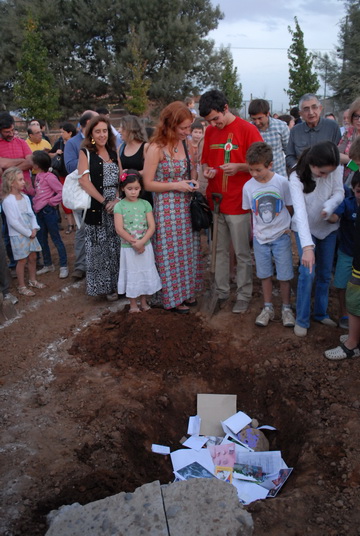 Blessing of the cornerstone

Presently the place has a chapel with a capacity for 200 people, meeting rooms for the Youths, Women’s and Couples Branches, and beautiful gardens, at the service of the Church and the city.

It was time to build Mary’s ultimate house, her Shrine of Tierra Escogida of Talca! The task already began.

The cornerstone of the future Shrine was blessed on 21 March, during a beautiful and touching ceremony with an abundance of youths, women, and families from San Fernando, Curicó, Talca, Linares and Santiago.

The cornerstone was brought from Santa Cruz [Holy Cross], a sign that unites us to the Father and Founder and calls us to become the reality of his words: “We not only want to educate ourselves and educate others; we also want to give the Most Holy Virgin the opportunity and the possibility to form and educate the largest number of people possible, from here.” 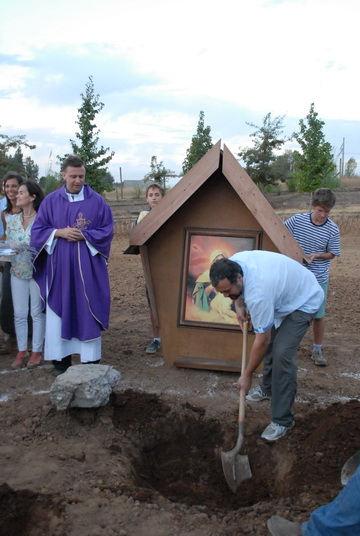 An invitation to the entire Schoenstatt Family

It was a heavenly day; Father Miguel Kast began with a motivation about the meaning of building a house for Mary. Then there was a very entertaining, clear and concrete testimony by Alfonso Campos, who told us from the Colina family: “You have a precious task before you that begins today without stopping.” The Capital of Grace and the Commissions were presented by those in charge, who worked arduously, until the blessing of the Shrine on March 19, 2016, the estimated date. The day ended with the Mass and the blessing. Those who attended placed their ideals, offerings, petitions, gifts of love and their desires for holiness into the cornerstone.

During the time of spiritual and material conquering, the Family from Talca offered to fill six clay jars of 100 liters each as Capital of Grace, imploring Mary to intercede before Jesus to work the miracle of transforming our water into the best wine– our Tierra Escogida into a Schoenstatt Shrine.

As of now, we invite the entire Schoenstatt Family to join the Family from Talca in this beautiful stream of life.