Palm Sunday in Tupãrenda: definitely worth the trip

By Maria Fischer, from Tupãrenda, Paraguay •

“We are minutes away from what the reason for this trip was about,” said Father Antonio Cosp, Director of the Schoenstatt Movement in Paraguay, as we walked toward the Pilgrims’ Church in Tupãrenda; it was a trip of more than ten kilometers. Several months ago, he invited me to visit Paraguay, saying:   “I would be very happy if you could come for Palm Sunday, on 29 March. It is one the days with the most pilgrims (it is always this way when they can take something home: a blessed palm…).” To be there at this point in time because the moment had arrived in Tupãrenda on Palm Sunday when the palms are woven and artistically decorated with flowers of every color… 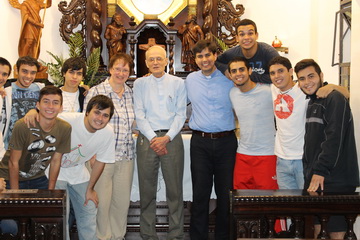 The Leaders’ School of the Boys’ Youth from the Diocese of San Lorenzo had been there since Friday so we were not the first to arrive, and the Holy Week celebration began with a Holy Mass in the Shrine of Tupãrenda, where adviser, Father Oscar Saldivar and Father Antonio Cosp concelebrated. At the retreat house, a large group of couples from the same diocese were meeting for the first retreat of initiation, “a retreat that gives them so much for their marriage,” Father Antonio Cosp explained. “Road to the Shrine” and to the Mass of the Boys’ Youth, on that Saturday night, couples were found seated in every corner, some walking together ignoring the soft drizzle. They looked at each other, they spoke, and the gleam in their eyes was noticeable, like couples in love… Afterwards, they celebrated a vigil. It was a “night of love” with songs and dances. There was abundant life around the Shrine of Tupãrenda, , and in the background, selfless service was done with love and enthusiasm even moving all the rented chairs to Holy Mary of the Trinity Church even though it continued raining, and all the grounds were somewhat wet. Groups could be seen in all parts of the church preparing something for the large feast of Palm Sunday, the first one celebrated in the recently blessed church, on the 28th of December 2014.

Early on the morning of 29 March, Father Antonio Cosp went to the church, pausing at the bookstore and the snack bar to bless the teams that were going serve the pilgrims, and to consecrate them close to the Mother of Tupãrenda, the Virgin of Schoenstatt. In the church, the ministers of communion and the entire large liturgy team were blessed and consecrated; they were all festively dressed. The Brave Men of the Rosary choir was preparing to enliven the Mass with their songs, the palms were arranged around the altar, and the priests began with confession, while the church filled with pilgrims of all ages. The leaders of the Shrine Pastoral estimated that there were from 2,500 to 3,000 people…

The great moment of the blessing of the palms

Despite the rain, at a given moment, a large throng went outside toward the large Unity Cross. The liturgy team encouraged the great moment of the blessing of the palms; it is the great moment of accompanying Jesus in his entrance to Jerusalem, mounted on a donkey, like a humble king, a servant king, a king, who was a friend, who came to give his life for his people. They raised their palms, while the priests and lay people traveled among the multitude, blessing the palms. Ramón and Marité Marini, the leaders of the International Federation of Families, with their characteristic solidarity, gave me one of their palms, so that I would not be left without a palm (which I had forgotten to get because I was caught up in watching everything …). Every pilgrim made sure at least one drop of holy water fell on the palm they bore. There was joy on every face, and in the songs, and applause…

With a large palm in his hands and blessing the people, who were beside the road waving their palms, Father Oscar Saldivar mounted the little donkey that had been waiting for a while to go to the church. Once, the donkey stopped and did not want to continue, until a little boy named Jesús, who accompanied him, said something to him to get him moving again. 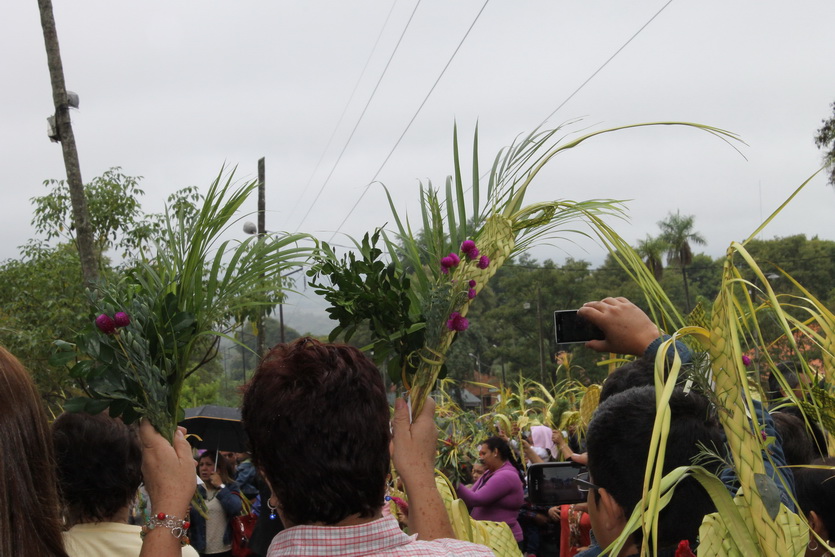 A walk with the Church setting out 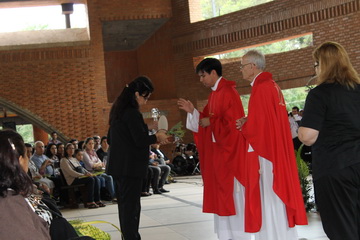 The solemn liturgy was carried out between readings and songs, between the joy of the Lord’s entrance to Jerusalem and the seriousness of his passion with the lively accompaniment of The Brave Men of the Rosary choir with songs in Spanish and in Guaraní: it was a liturgy that led to the heart of redemption, to the passion and the death of Jesus and that now breathed the resurrection of Easter.

“We not only walk with Jesus during these Holy Days. All our Christian life is a walk with and behind Jesus, a walk with his disciples, a walk with the “Church” setting out. [1] And to walk with Jesus and his disciples is not only a walk of conversion; but also, it is one of hope and of profound joy; because to walk on the path of conversion enlivens hope in our hearts and it gives birth to joy. And so that is what those who follow Jesus expressed at his entrance to Jerusalem by joyfully and hopefully cheering: “Hosanna! Blessed is he who comes in the name of the Lord!” (Mark 11:9).

On pilgrimage to the Shrine 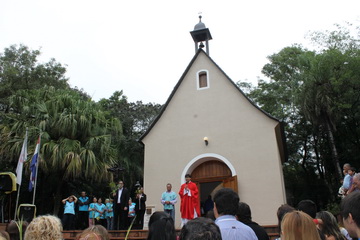 The Holy Mass ended with the invitation for everyone to go on pilgrimage to the Shrine, while the new missionaries received their Pilgrim MTAs in the presence of the Father Pilgrim MTA, that Pilgrim MTA, which Don João Pozzobon gave Father Kentenich on 19 March 1968, a pilgrim picture that was in the hands of two saints, and that went out of its cabinet in House Marienau in Schoenstatt to go to meet its missionaries in Tupãrenda. “I thought about its visit, and would like for the Blessed Mother to help us so that our hands will be the third holy hands that carry Her,” wrote José Aníbal Argüello from the Youth Campaign upon asking for the presence of the Father Pilgrim MTA at that time. How could such a desire be resisted?

All the pilgrims went on pilgrimage to the Shrine, where they renewed their Covenant of Love, and many remained there to pray. Others gathered to participate in the open talk of the Tupãrenda Family Pastoral on the topic “From the Shrine, be living shrines,” and in every corner of the beautiful grounds groups could be seen talking, greeting each other, and exchanging experiences…to go out from the Shrine to return, and to return only to go out again…just as Father Oscar said at the end of his homily:

I traveled more than 10,000 Km. to experience this Palm Sunday in Tupãrenda. And it was worthwhile. Thank you, Tupãrenda

[1] Cf. POPE FRANCIS, Apostolic Exhortation the Joy of the Gospel