Shine your light – the Torch in the Shrine 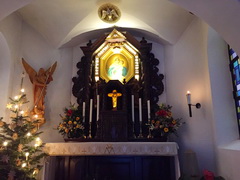 GERMANY, Felix Geyer. Every year the Schoenstatt Boys Youth (SMJ) of Germany meets for its annual conference between Christmas and New Year’s Eve. 2014 was a very special year for us all and our conference reflects this. 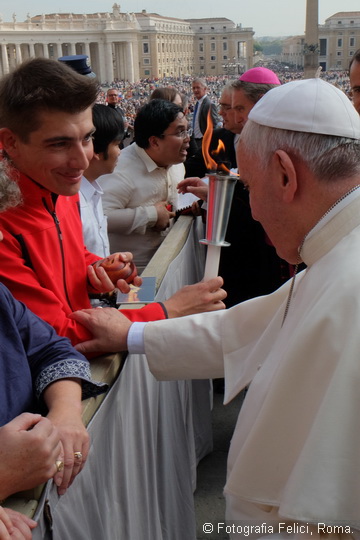 One of the main elements of the Jubilee was the arrival of the Fackellauf in the arena in Schoenstatt. The torch was blessed by Pope Francis and the light that was carried with it into the centenary celebrations in Schoenstatt was lit in Pompeii by the local archbishop and started its journey to Schoenstatt from there.

Symbol for a new beginning

Pompeji, because Fr. Kentenich read an article about the place that inspired him to found the pilgrim place of Schoenstatt. By fetching the light from the place of the original inspiration, we marked the turn of the 2nd Schoenstatt-Century as the time of a new beginning. The light of the torch stands as a symbol for this process.

On the 28th of December 2014 we celebrated the mass of the covenant of love and installed the torch as the new “Eternal light” in the shrine on Mount Tabor, which is the shrine of the men and the boys movement here in Schoenstatt. Monsignor Michael Gerber, the auxiliary bishop of Freiburg who is one of the Fackelläufer and ran one stage of our journey of 1800km, was the principal celebrant on this special occasion.

Installed in connection with the Jubilee, the torch symbolizes the new beginning, a new foundation for the second century of Schoenstatt. It reminds us all that the boys were  the very beginning of the Schoenstatt-Movement and now take on part of the responsibility for the next century.

In touch with today`s technical world 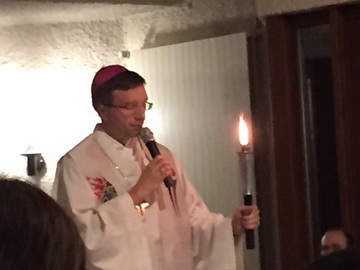 The torch represents in itself, in its very construction the SMJ and all we stand for.
The design was created as part of a scientific project at the university and represents the creativity of the young generation in solving the tasks connected with a project.
To test the practicability of the handle for instance, a prototype was created via a 3D-printer, tested and perfected and then turned out of plastics.
Handling the plastic and creating the handle of the torch shows the SMJ being in touch with the world of today and everything technology and science has to offer.
The body of the torch was turned out of aluminum and the cover with the thread for the burner was then pressed into it with the power of a 30ton press. The process of the hand crafting of the handles involved fine mechanics, a keen eye and a hang for precision, reflecting the hands-on approach of our work with the young people of today who are “handcrafted” by God into his unique creations and the power used reflects the power of the young generation.
A lot of thought was put into the burner. The thread needed to be crafted to connect it to the body of the torch, showing the fine mechanics that connect each one of us to the body of the SMJ.
Wicks were searched, tried out and decided upon to be the connection transporting the energy into the burner to feed the flame, thereby representing the individual ways to invest ones energy into the work with the young people.
The flame needs fuel. The shrine and what it represents gives us this fuel through the covenant of love in connecting us through Mary to the triune God. The oil, won out of thousands of seeds, stands for all the energy and enthusiasm each and every one of us brings into the life of the SMJ through his engagement and his enthusiasm. 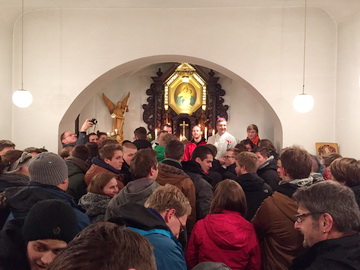 Four screws, set to represent the four points of the compass and thereby the international SMJ anchor the torch in the shrine right next to the tabernacle, the presence of Christ, and in front of the picture of the MTA. Our work in the presence of Christ and in the covenant of love with Mary is irreversibly connected to the shrine as our home and anchor.
The arm of the mount with its ring holds the torch and it’s flame into the world. It is a symbol of our community bearing the fire of the new beginning in its hands.
In becoming the Sanctuary Light, the torch bears witness to the faithfulness of the SMJ to its mission over the past 100 years.
“Here I am” / “Aqui estoy” were the words of Javier presenting the torch to the MTA in the original shrine.

The “Here I am!” / “Aqui estoy!” so becomes our promise to Our Lady for the future of Schoenstatt. The promise to remain faithful to our covenant with HER and the pledge to: