More than you thought possible 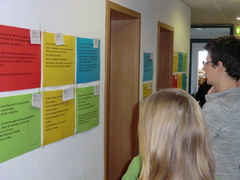 GERMANY, fma. The whole of the ground floor, including the cafeteria, “papered” with coloured pages – this is how the Schoenstatt Centre in Memholz greeted young people, families and singles, collaborators at the Schoenstatt Centre and those involved with the Movement, on the Third Sunday of Advent for the sixth Memholz Conference. It had dealt on four occasions with making the Schoenstatt Centre fit for Schoenstatt’s second century, but this had already been in operation for some time. Yet there was no thought of taking a rest, recuperating and waiting for what would happen. The coloured pages on the walls made it clear from the start that movement was required, going out to the outskirts of society and the wide world. A total of fifty statements from Pope Francis’ message to the Schoenstatt Movement, and in between no fewer “outward thrusting” statements from Fr Kentenich’s address at the laying of the foundation stone, inspired those present to action from here, or, put more casually: Second century – Memholz to go! More than you thought possible.

Again and again individuals or little groups stood before the questions, inspirations and challenges on the wall. “I never took in the message of the audience like that before”, one remarked. “All together it’s marvellous, but when you are faced with the individual statements and allow them to influence you, it becomes much stronger, more personal.”

My 18 October – my renewal of the covenant of love 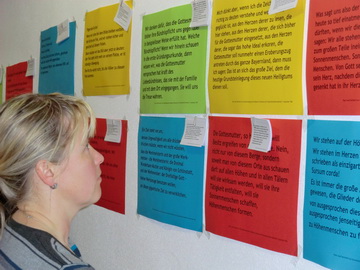 The conference began with a review of the Jubilee celebrations in Schoenstatt, Rome and Memholz using pictures, and with personal comments: What was my Jubilee moment? Was it the moment I renewed my covenant of love, my 18 October? And the multiplicity of personal jubilee experiences and guidance suddenly became present in the room: the moment when the MTA picture was carried back to the Original Shrine, the return of the Father Symbol after the redecoration of the shrine, an unexpected meeting during the jubilee celebrations in Schoenstatt, time in the Original Shrine on 18 October, the joy of celebrating the jubilee together as a Family in Schoenstatt, the entrance of the torch relay runners, the service to the pilgrims in Belmonte, Rome, a statement of Pope Francis during the audience, the presentation of personal projects in one of the Tents of a Covenant Culture, a completely personal moment neither on 18 October, nor in Rome, Schoenstatt or Memholz … Experiences that continued to resonate in the shrine even when the evening had long come to an end. 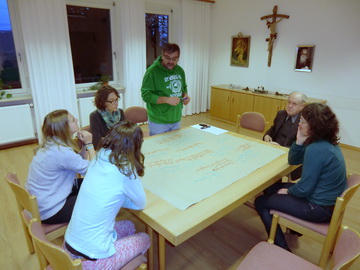 What happened in the year of grace in Memholz, with my co-operation and beyond? What were we given here? What did I receive; what was my jubilee contribution? And in view of the festive motto of the year: More than you thought possible, the question: What was MORE? Where did MORE become possible? The participants considered these questions in groups and then together … and MORE came together than anyone had previously imagined possible. Something else was fired up – the longing for MORE, and the readiness to dare MORE personally, to give MORE, to discover MORE fields for growth, for service to others.

With courage – Out into the world 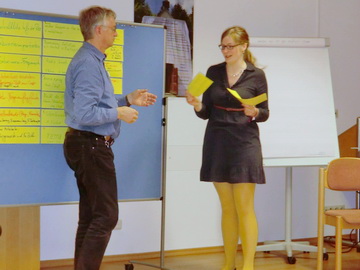 On Saturday afternoon it became very intense: Each one was asked to choose one (only one) sentence from the audience and Fr Kentenich’s address, and to read it out to everyone. Was all that really said in just one audience, in just one talk? Some sentences were repeated … intensified, deepened. When some sentences were read out a smile flickered over a number of faces: Of course, he or she would only choose that sentence! Again and again amazement when statements by Fr Kentenich and Pope Francis fitted so well together, as though both were talking just now about renewing the Church and going out as apostles.

Touched by this experience, the participants gathered in changing groups to move towards practical thinking and planning: What could we do here? What sort of events, which collaborators do we have, what can we do? Much was mentioned, laughed at, admired … and some things began to take shape. Carrying on with the renovations – that could be expected and nevertheless gave rise to great joy. A day to try things out, or, compact Memholz offers, a sort of home Mass? Perhaps. A “Memholz Chat” in Whatsapp. Amazingly strongly, after it had almost got lost in the reports: a “flea market”. Before that naturally a new edition of the “Ramadamma” (for the uninitiated: a clear out, or, tidying up), after all, you have to have something for the flea market. Although the faces showed clearly that some were already clearing out cupboards and attics. Inspired, strongly inspired by Pope Francis: A meeting for dating couples? At any rate another pre-marriage course at Easter! And, a Dance and Pray Weekend. Margit Reich: “I enjoyed the Dance and Pray Weekend in the Pentecost holidays so much that we will definitely be able to add on a few days of vacation. We arrived yesterday from our last dancing class with a photo for the flyer …”

And best of all: There are already people who are prepared to carry out each practical suggestion!

A very beautiful Family Mass with the musical support of the children and youth closed the Memholz Conference. Even when the last participants only got into their cars late in the afternoon … 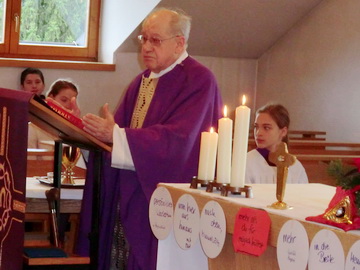 That, too, is the Memholz Conference: A married couple taking part runs a family business. “At the Advent market there were still exactly the number of packages with delicacies left over as we had workers, so that as we cleared up it made my purchases easier and also saved time, because everything was packed in cellophane and ready to be given as a gift….”

In the end it was clear that all our striving for more, for growth into the heights, in extent, into going out and working “from here”, can only be summarised in one statement, which is well known and yet takes on a new resonance: “More than you ever imagined possible!” What else?