She has begun her triumphal march towards 2014

PERU, Manuel Huapaya. Monsignor Miguel Irizar Campos, Bishop of Callao, presided at the Eucharistic celebration of the inauguration and blessing of the recently remodeled parish of Our Lady of Lourdes in Santa Marina, Callao amid an atmosphere of great joy along with the presence of local politicians, invited guests, and a large number of the faithful. The work of remodeling had been carried out because the roof, as well as the floor, was much deteriorated. The founding of the Schoenstatt Movement in Callao took place in this parish twenty-one years ago, on December 8, 1988. 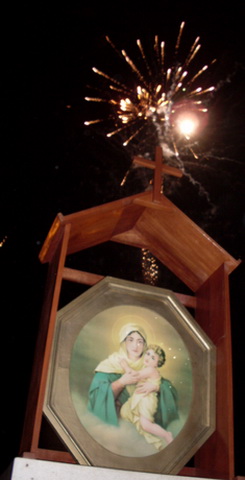 Father César Nuñez, the pastor and a member of the Schoenstatt Diocesan Priests, carried out the necessary tasks. The support of the mayor of Callao was very important as he fulfilled his promise he had made to the community to remodel the church. Thanks to his collaboration, the work became a reality. At that time, the parish vicar, Father José Antonio Arbulú, along with Father Sidney Fones (who was the Regional Superior of the Schoenstatt Fathers at that time) and two young men assumed the beautiful and blessed task of establishing the Schoenstatt Movement within this diocese. An exceptional aspect of its beginning was that the Movement never was established in an organized manner until the arrival of Father Arbulú at Saint Joseph’s parish in Bellavista.

Our Blessed Mother is always faithful

Today, years later, our Blessed Mother, who is always loyal, wanted to return to her grounds, which she did, and in her way by entering through the main door. Last year (December 2008) after twenty years, a Mass for the renewal of the Covenant was celebrated for the first time and this year on March 25th a MTA Wayside Shrine was blessed. On July 21st, the remodeled church was blessed and part of the remodeling included the wayside shrine, which was initially on the side of the church, but it is now located in the main section of the park in front of the church. Father César Nunéz stressed that the Blessed Mother now faces the main altar, and when the priest celebrates the Eucharist, She accompanies him with her loving gaze.

The parish roof, floor, sacristy, windows, doors, lighting, sound, and so forth have been refurbished. The parish community also generously donated for the new altar, ambo and other furniture. Therefore, on July 21st at 6:00 p.m. they shared in the Mass of blessing.

Bishop Miguel Irizar Campos accompanied by Monsignor Luis Bambarén Gastelumendi, SJ, Bishop Emeritus of Chimbote, Monsignor Raimundo Revoredo Ruiz, CM, Prelate Emeritus, and Bishop de Juli from Puno presided at the Eucharist. Furthermore Father José Antonio Arbulú, Father Fernando Chang, and Father César Fernandini, among others returned after some years. Bishop Irizar mentioned the history of the parish and the effort to evangelize the community of Callao in his homily.

As the pastor, Father César Núñez’s gratitude for the invaluable support of the community to accomplish the improvement of the Our Lady of Lourdes Parish was expressed with great emotion.

The picture of the Patron of Callao, the Lord of the Sea, was also present at the inauguration of the parish, which was carried to the atrium of the parish in a very short procession. The spectacular fireworks embellished the conclusion of the Mass.

After the Eucharist, the celebrants (Bishops and priests) went on pilgrimage to the center of the square towards the wayside shrine as a sign of gratitude to our Blessed Mother for everything she has worked from this place. 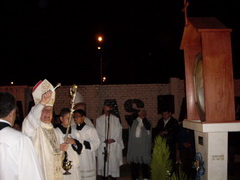 On Sunday, August 2nd, the Stations of the Cross were blessed; another local politician had donated them. This blessing took place on the same day during the Eucharist presided by Monsignor Salvador Piñeiro, Bishop of Peru; the sponsors and representatives from the different movements and parish groups attended. Mrs. Patricia Kouri (Ladies’ Branch), her husband, along with Verónika and Jorge Arteta, leaders of the Couples’ Branch from Lima, represented Schoenstatt.

It is important to point out that Father César Núñez, a very young priest, learned about Schoenstatt from his early youth, and he was part of the Founding Generation, a group that was practically in charge of the founding of Schoenstatt in Callao. 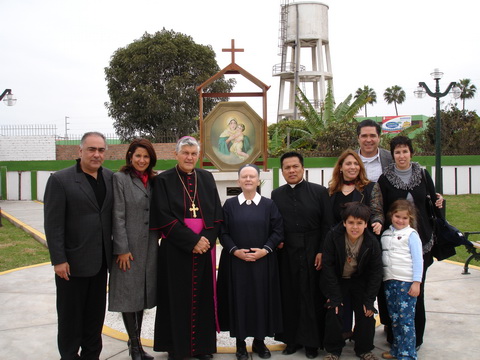 Once he was ordained as a priest, he was named pastor of the Callao Cathedral, where he chose and supported the Movement’s different groups.

His love for Schoenstatt and our MTA led him to seal his Covenant of Love in Bellavista, Chile, where he went on pilgrimage a few years ago along with other diocesan priests.

Now this place has both a Boys’ and Girls’ Youth, as well as the Movement of the Pilgrim People, and the Schoenstatt Rosary Campaign.